Tulip Farmer Dave Roberts-Thomson grew up on one of North West Tasmania’s most popular tourist destinations - Table Cape Tulip Farm. Here he talks about growing up on the 200 acre farm, how arts, science and community can intersect, the potential of North West Tasmania, and the farm's enduring partnership with Big hART.

My name is Dave Roberts-Thomson. I grew up at Table Cape. I’ve been drawn to, and trapped by the family farm my whole life, (laughs). I’ve also had a lifelong interest in the arts, science and community, and I’ve always been interested in seeing how those things might be able to come together on the farm. 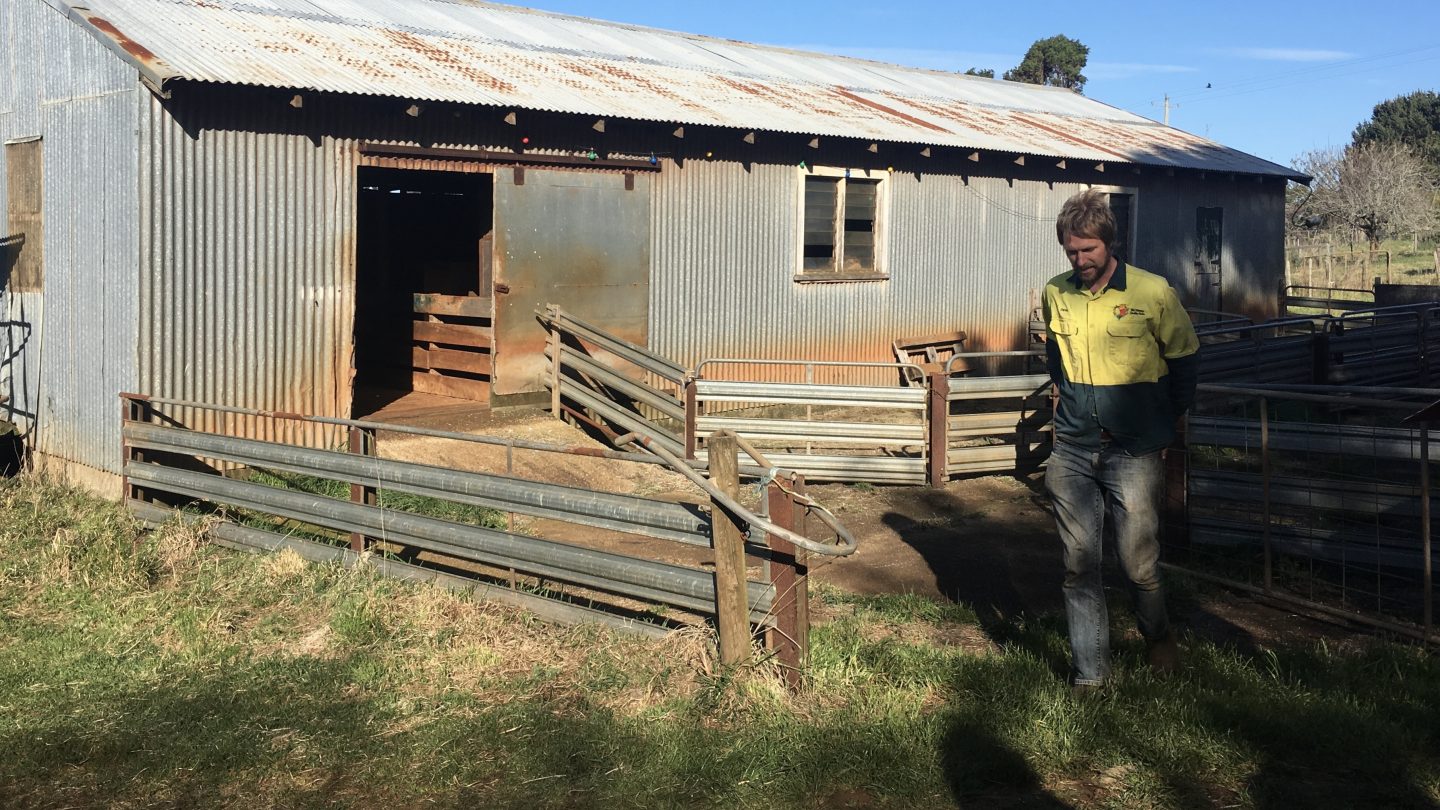 The Roberts-Thomson namesake have been on the family farm since 1910. They moved across from England, not knowing a thing about being farmers. They started a new life working the land, which they knew really nothing about. Sheep and potatoes were the mainstays of the early farming family at Table Cape.

Mum and Dad imported their first tulip bulbs from Holland in 1984. They were keen to do something different to the generation before, cut a new path, and there was an opportunity to do something that was exciting and new. 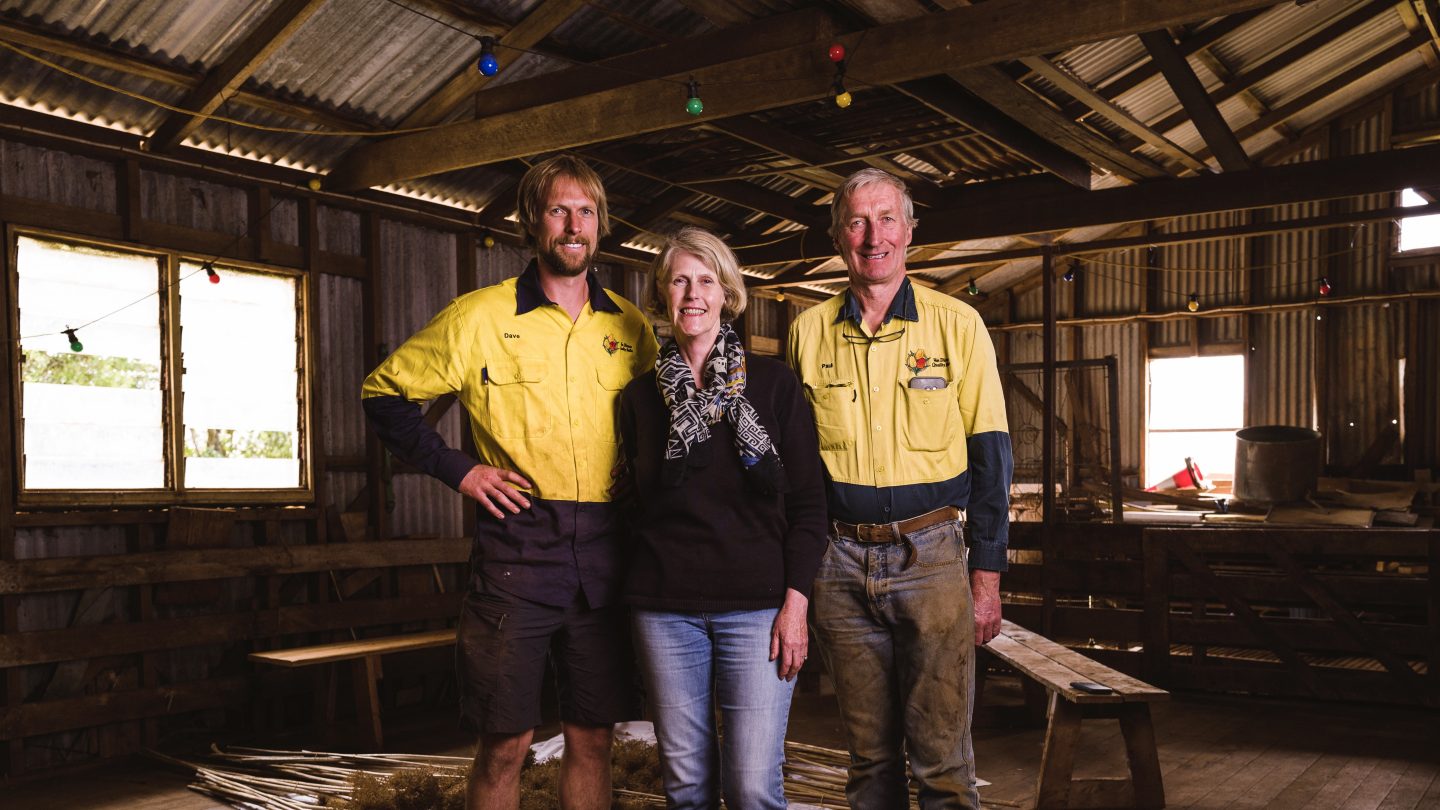 Dave with his parents Bronwen and Paul Roberts-Thomson who began the tulip farm in the 1980s. Photo: Heath Holden.

Mum was studying social work and Dad was studying Agricultural Science. Dad’s professor at uni was really interested in tulips and put the seed in Dad’s mind and away they started. It started off as a very small venture, and Van Diemen’s Quality Bulbs just sort of grew from there. Table Cape Tulip Farm has been going for over 30 years now. 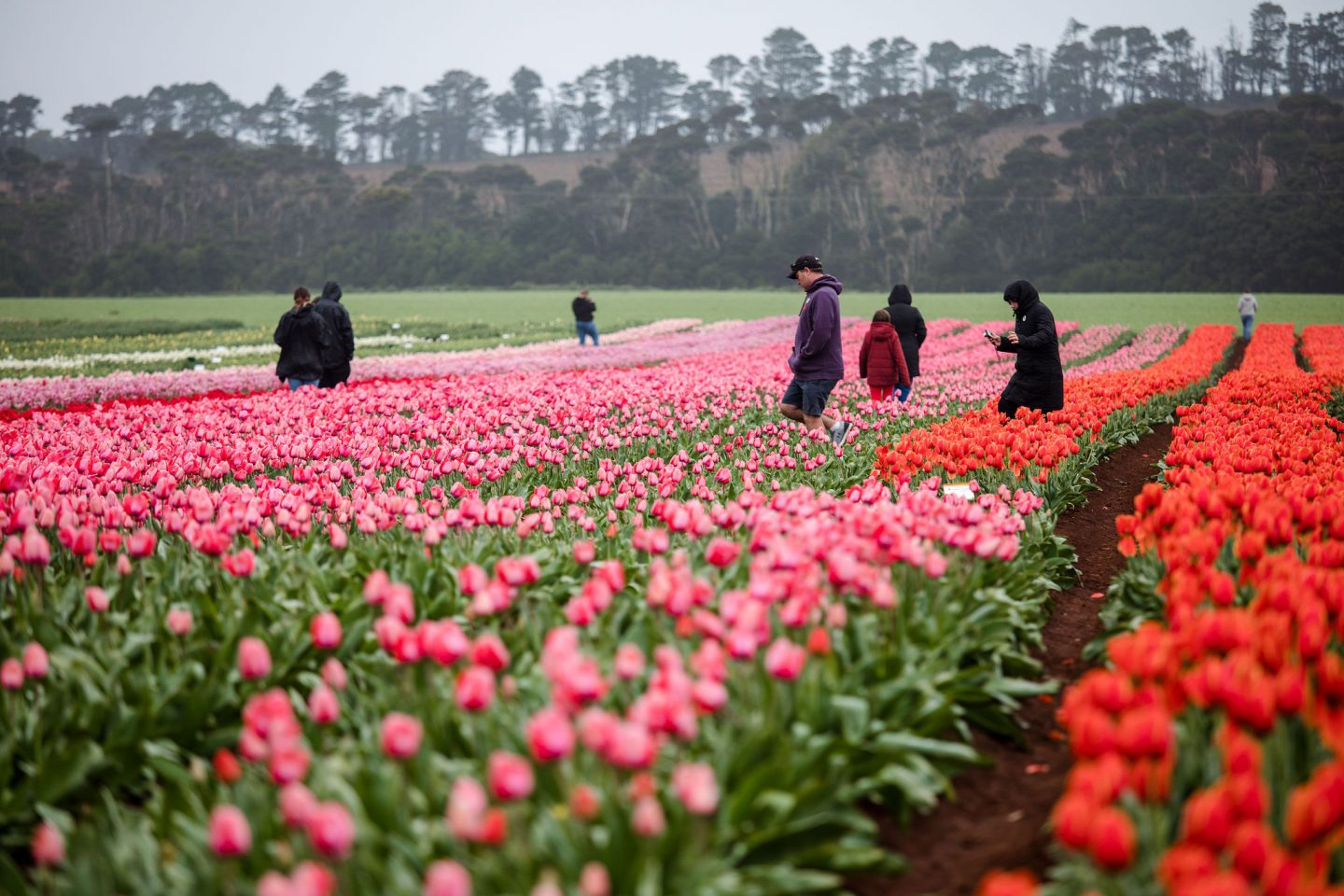 Growing up on the farm

I went to the local primary school which was then Wynyard Primary, it’s now called Table Cape Primary. I remember exciting periods of the year like haymaking which we looked forward to all year. That was a really exciting day on the farm. Often it was in the summer and we had cousins around. I remember my grandfather and Dad and lots of times playing in mud and things like that. I used to trail along behind my Dad and I can remember thinking that I was being very useful. I probably wasn’t! 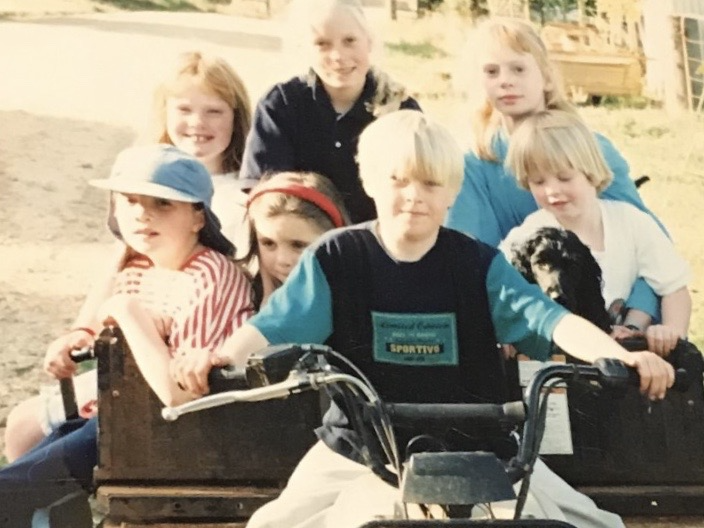 I’m really lucky to be in a business where artmaking is what we do. That’s part of the reason I came back. It’s pretty important to reflect who we are and what we are through art.

Working with the young women of Big hART’s Project O has been a really great experience. The reality of life on the farm is you don’t get many opportunities to engage with young people in the community. I think we offer some concrete things that have been really positive for Project O. 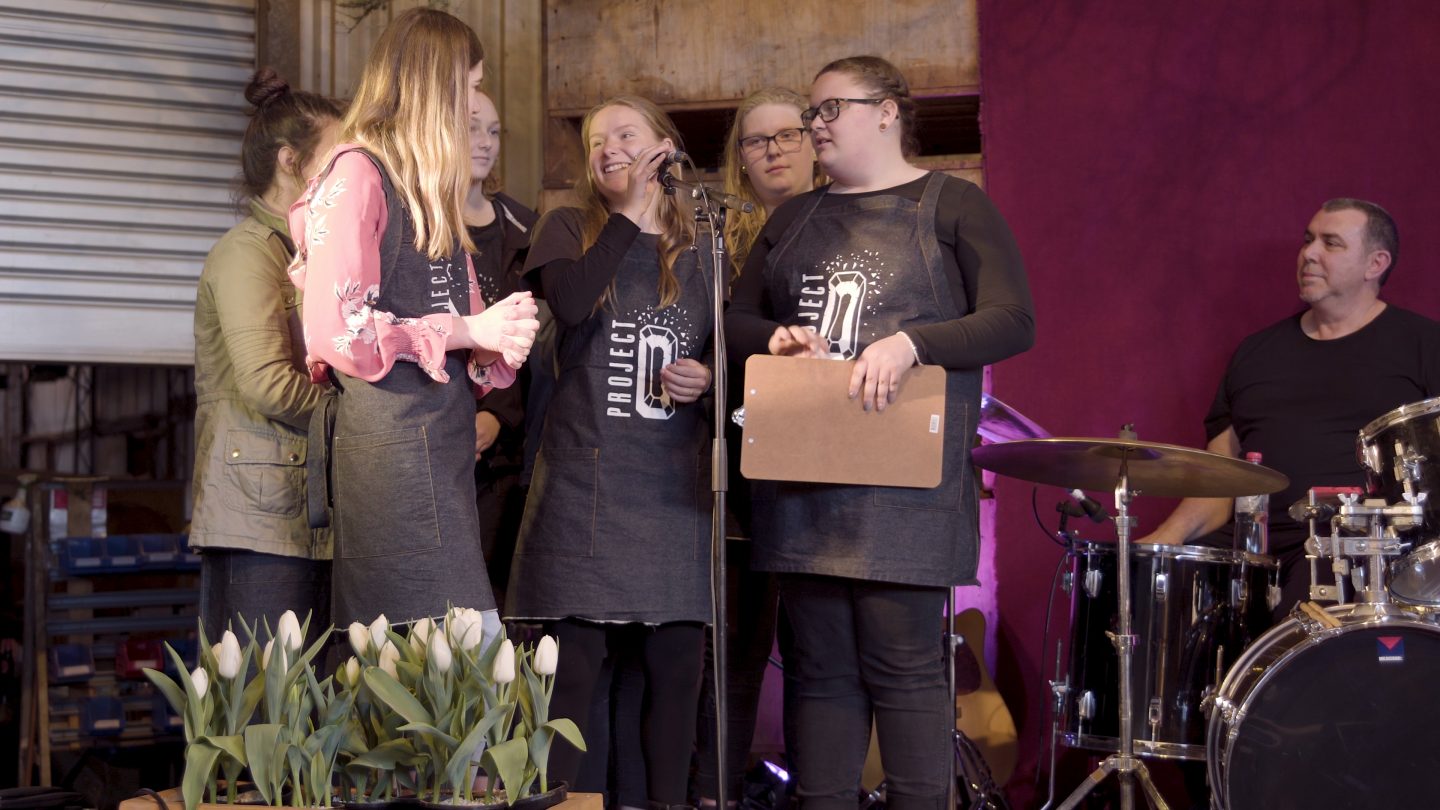 Personally I really enjoy it. We’ve learnt a lot about the production of events having the crew around. I think the girls have taught me to relax more. I’m doing a lot and get a bit stressed out, but they pull me into line and get me pointed in the right direction. Many of the girls are so impressive. I’m sure a lot of that has to do with the quality coaching they’re getting through Project O, but they just take on these new responsibilities and challenges with such professionalism.

Tunes in the Tulips

Tunes in the Tulips is just a genuine, fun experience for people and young families. It’s a real coming together, the social stuff of working with the girls and working with Big hART. 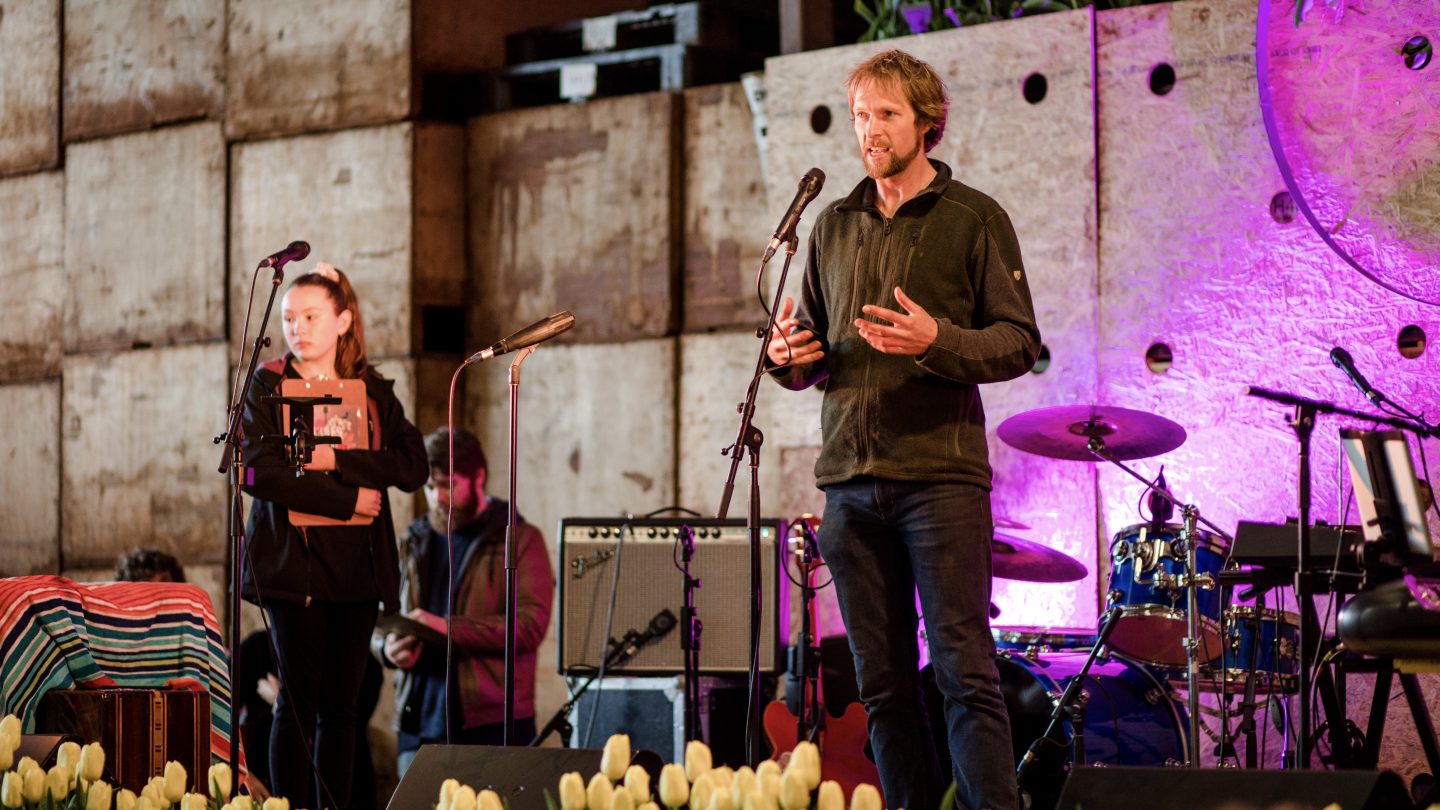 It just gives joy to a heap of people, and it’s a really fun event. I love getting up and having a little dance with my kids at the end of it. 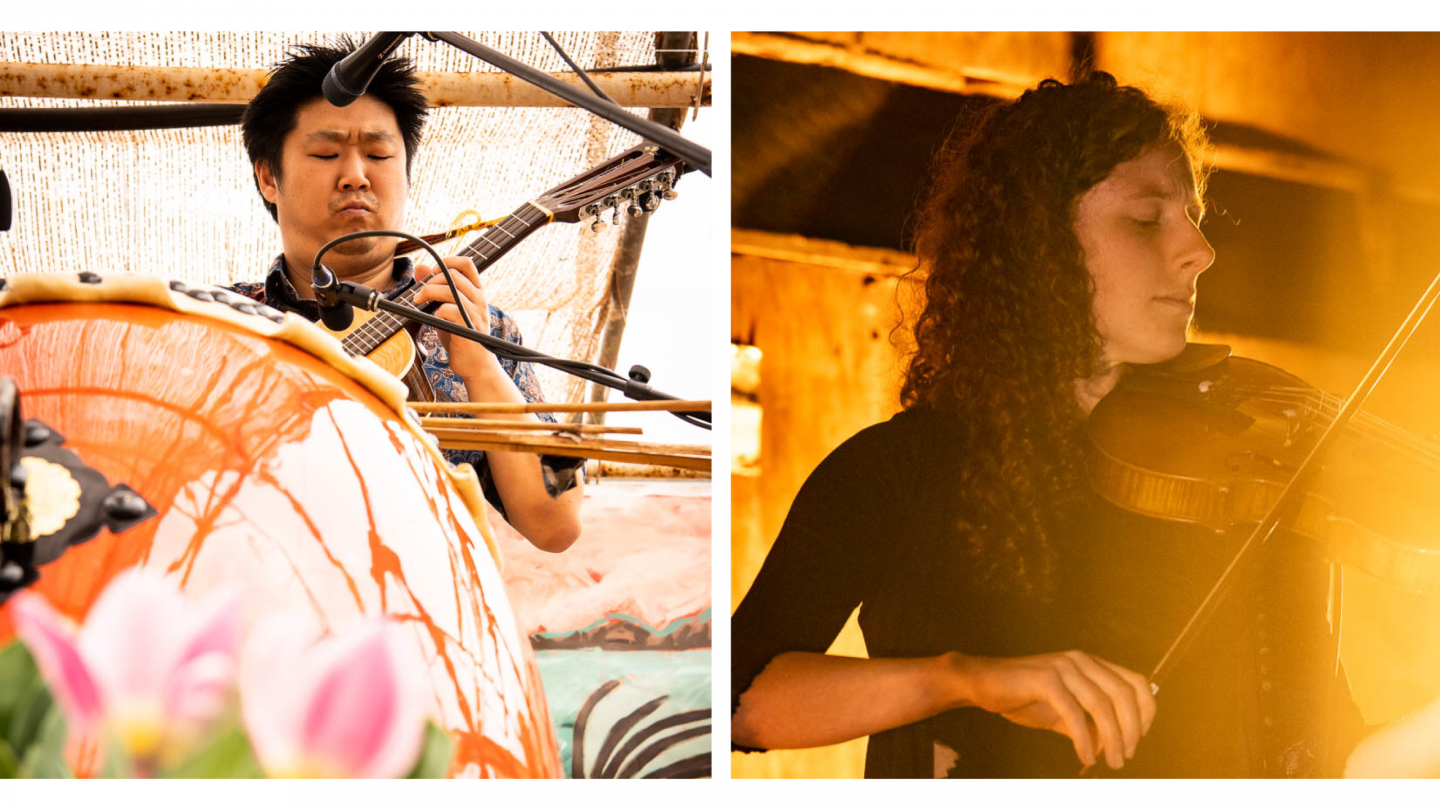 I’m pretty proud of Acoustic Life of Sheds. Being able to invite people to our place and show off some really impressive performances. We’re very proud that we are part of it, and help produce something that’s so loved around the community. 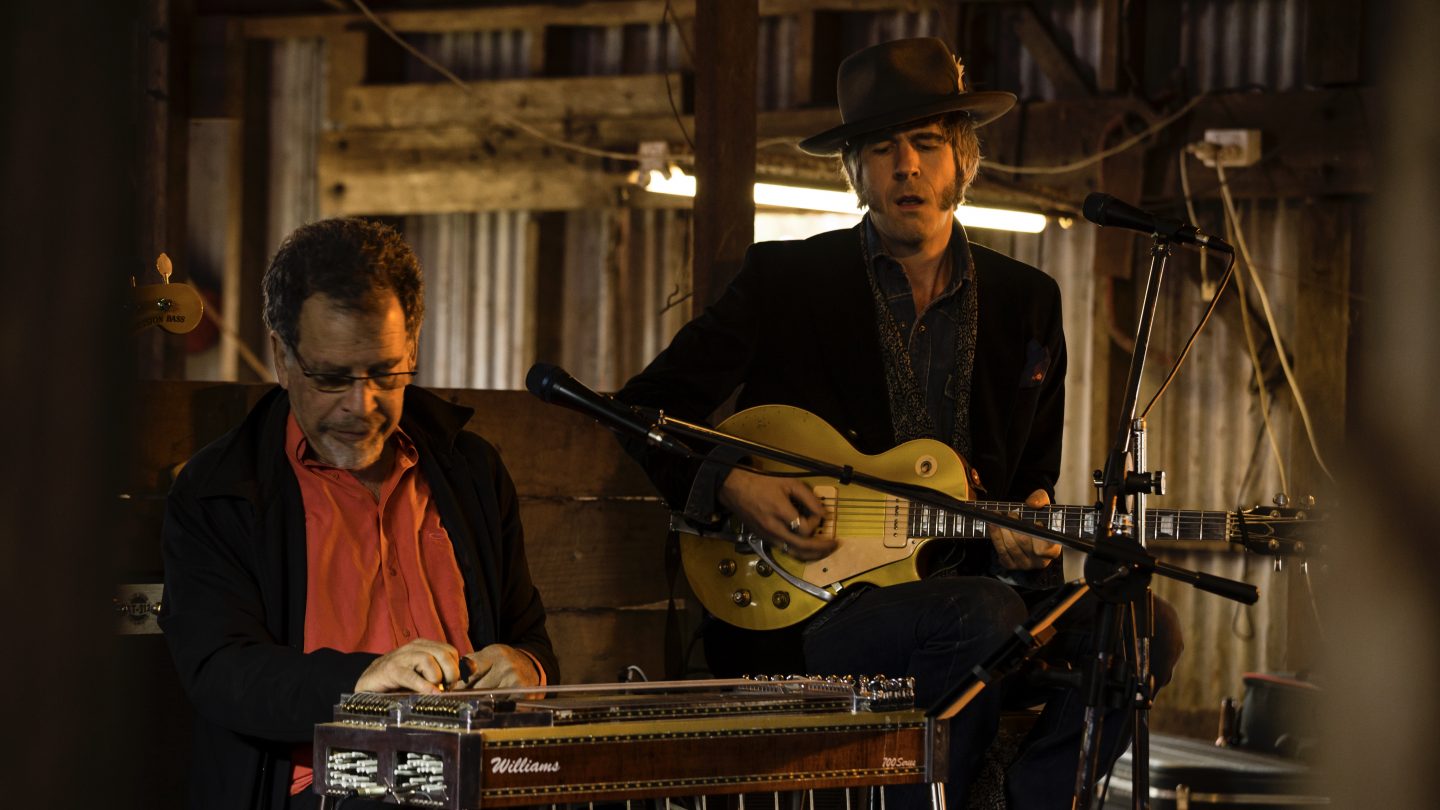 It’s changed a lot on our farm – the intensification of what we do, and we’re stacking enterprises which is quite different to how we were doing it before. In the past, about half or two-thirds of the farm was dedicated to sheep, cropping wasn’t nearly as intensive, but we’re almost entirely cropping now.  We’re also doing wholesale and retail. We produce hundreds of thousands of tulip bulbs per year, maybe millions. 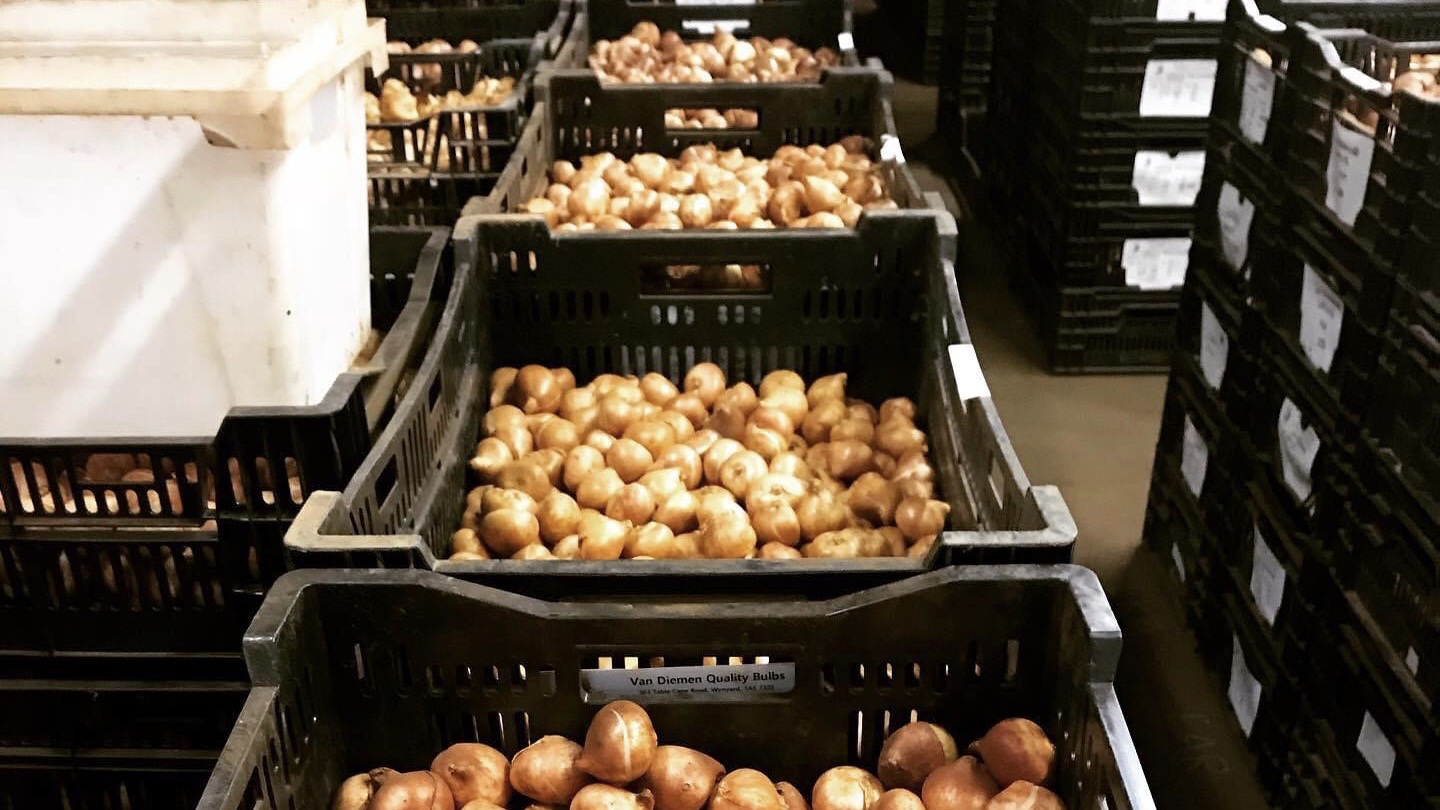 Then there’s tourism on top of that around the tulip farm. Tourism and retail brings that immediacy and connection with the public and the customers which is really nice. 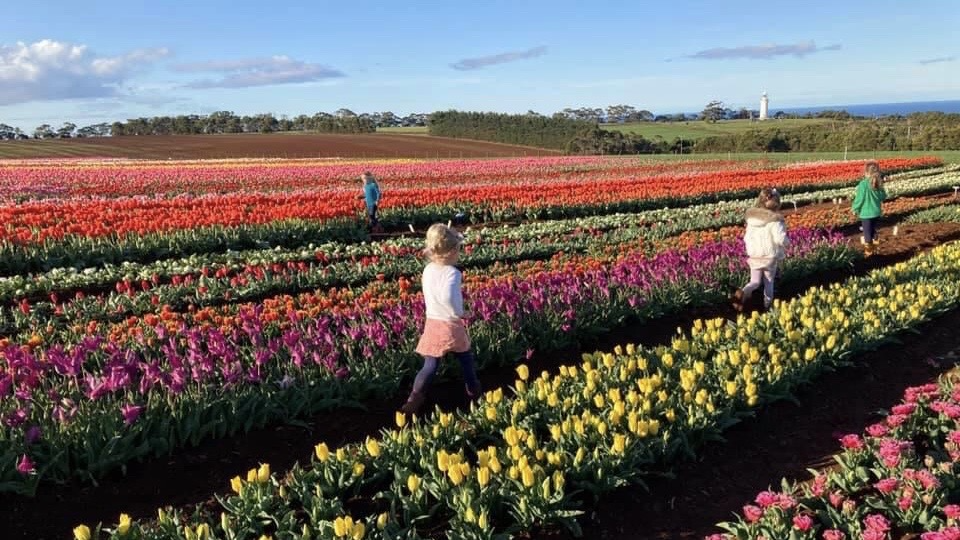 The future of agriculture

I think agriculture is pretty destructive in its current form. There are definitely people who are doing it a lot better than other people, but you can’t pigeon hole a conventional farmer versus an organic or regenerative sort of farmer. There’s some pretty massive problems in cropping and in grazing that we’ve got to address. We live on a fairly fragile world in Australia. Climate change is real. Every year, even on the North West Coast, farmers are saying,  ‘that’s the driest July we’ve ever had’. Every year we tend to have a drier something, some sort of extreme that makes farming challenging. 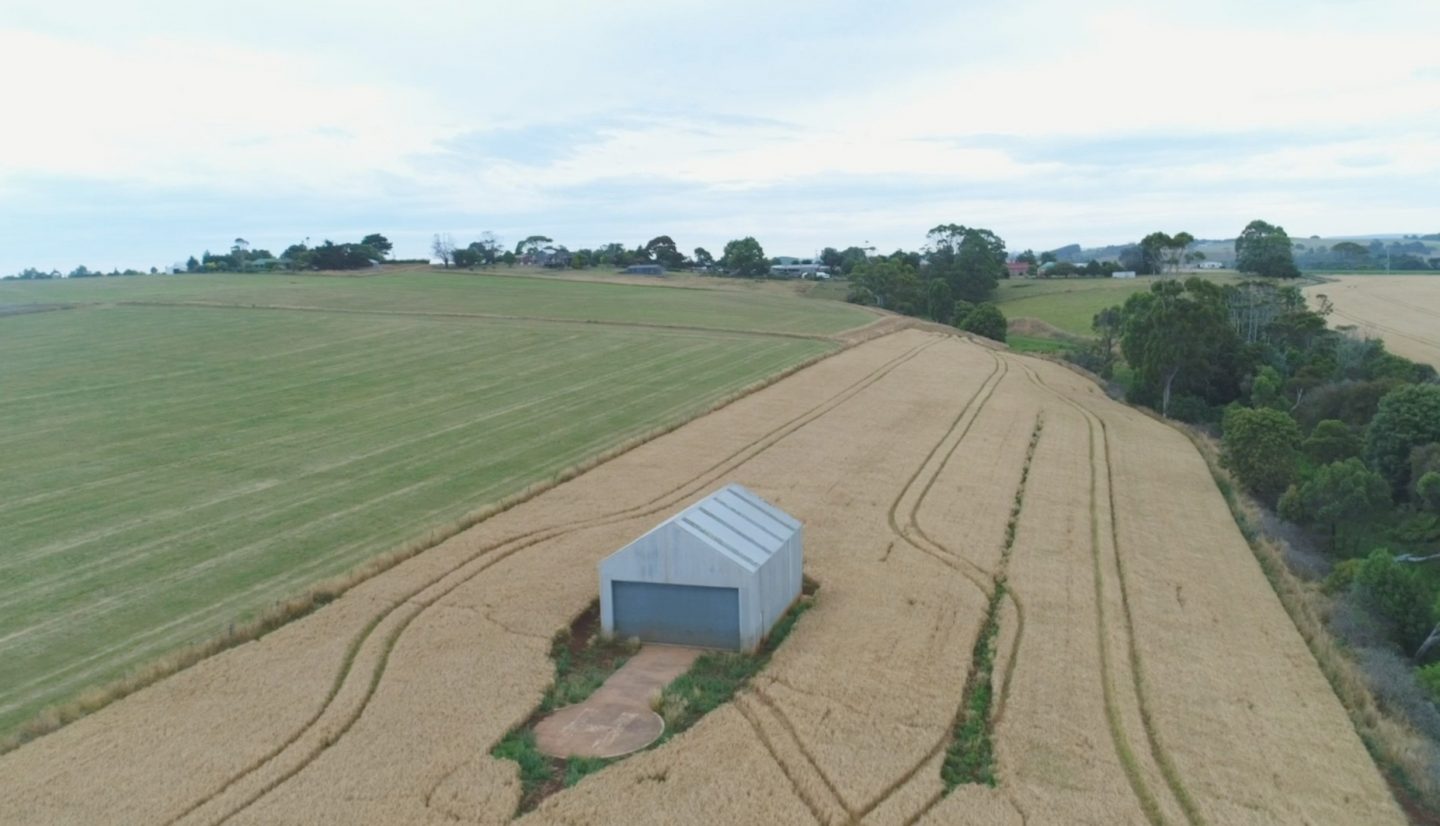 We’re wrecking our opportunities into the future and how we can farm. We’re seeing lots of areas in Australia that are suffering from the results of big degradation of the soils. Hopefully, we’ll be able to turn that around.

Unfortunately, there’s a lot of science that we try to extrapolate from today that didn’t take into account soil biology. We’re learning which science is valuable and which science is not when we start trying to grow in a more biologically sensitive way. At Table Cape we’re learning how to use our soil microbes, the soil biology, to help grow crops. We’re trying to enhance our field and not kill our soil biology, so that it can enhance and defend our plants that we’re trying to grow from pests and diseases. We think that we’ll be able to grow healthier plants that way with less need for chemical intervention, that’s what we’re trying to do. We think it’s working so far. It’s more complicated than we’ll know, we won’t always get it right. 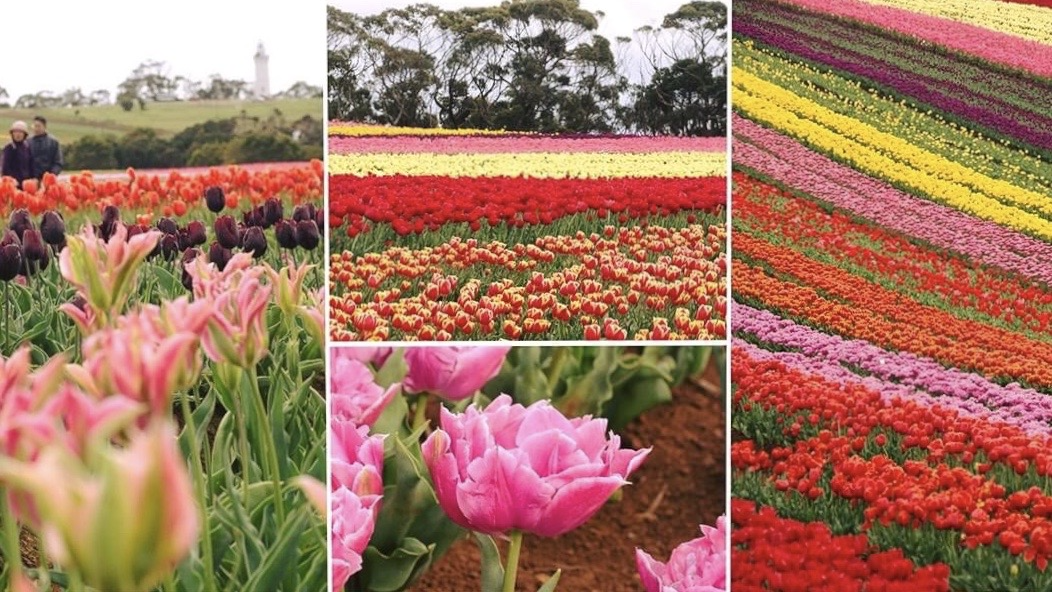 The Robert Thomson’s are implementing the science of soil biology into their farming techniques. Photo: Van Diemen Quality Bulbs.

The North West of Tasmania is at a crossroads – we’ve got incredible natural assets but we’re just limited by our imagination. That’s why our collaboration with Big hART and Project O have worked so well. There’s great opportunities in production, farming, tourism and other areas. 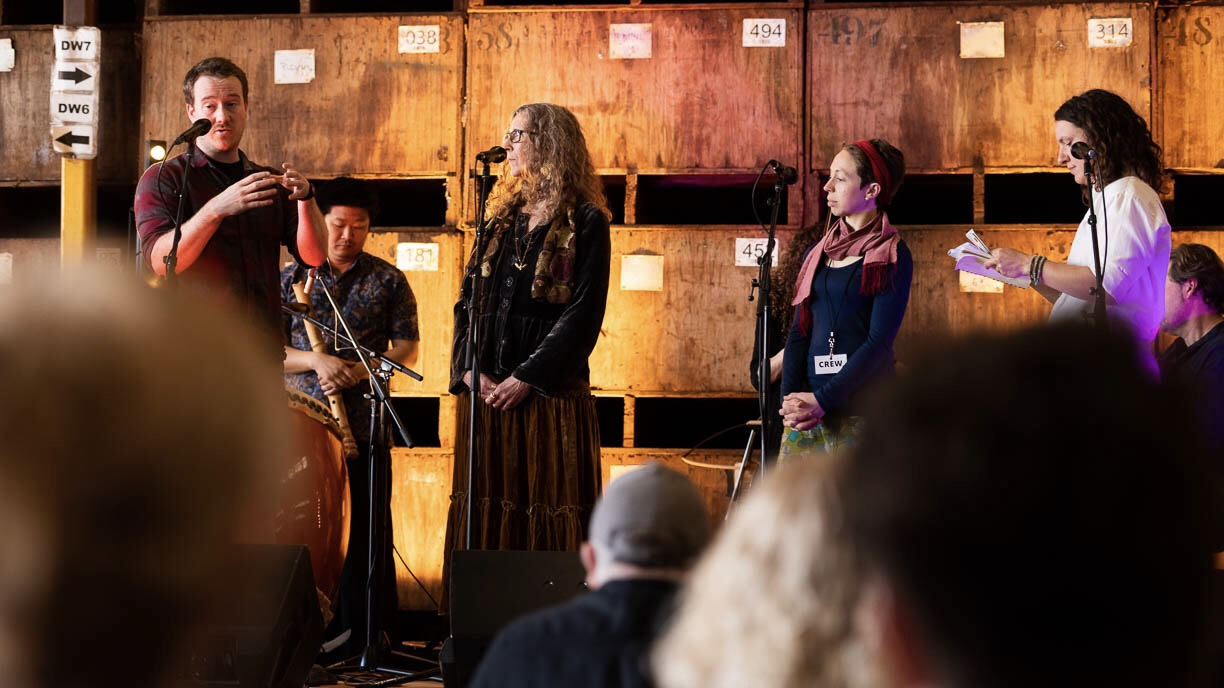 There’s an area of opportunity,  but I don’t want the North West to be like the last place that was exploited. I think there are great opportunities here to do more sustainable development and more sustainable farming systems. A lot of that is knowledge and education, we need smart, hard-working people to see these opportunities, for the potential to be realised.

I found it helpful to leave and come back, sometimes it’s hard to see what you have when you’re here. There are huge opportunities for community. I sometimes feel concerned how few young people are willing to take a risk, whether it’s in business or social enterprise, or in community building things. People need to try to make it happen on their own, build a coalition around them to make it happen.

If you want things to change you have to change it. If you’re open and genuine about how you want to do that, people will help you. 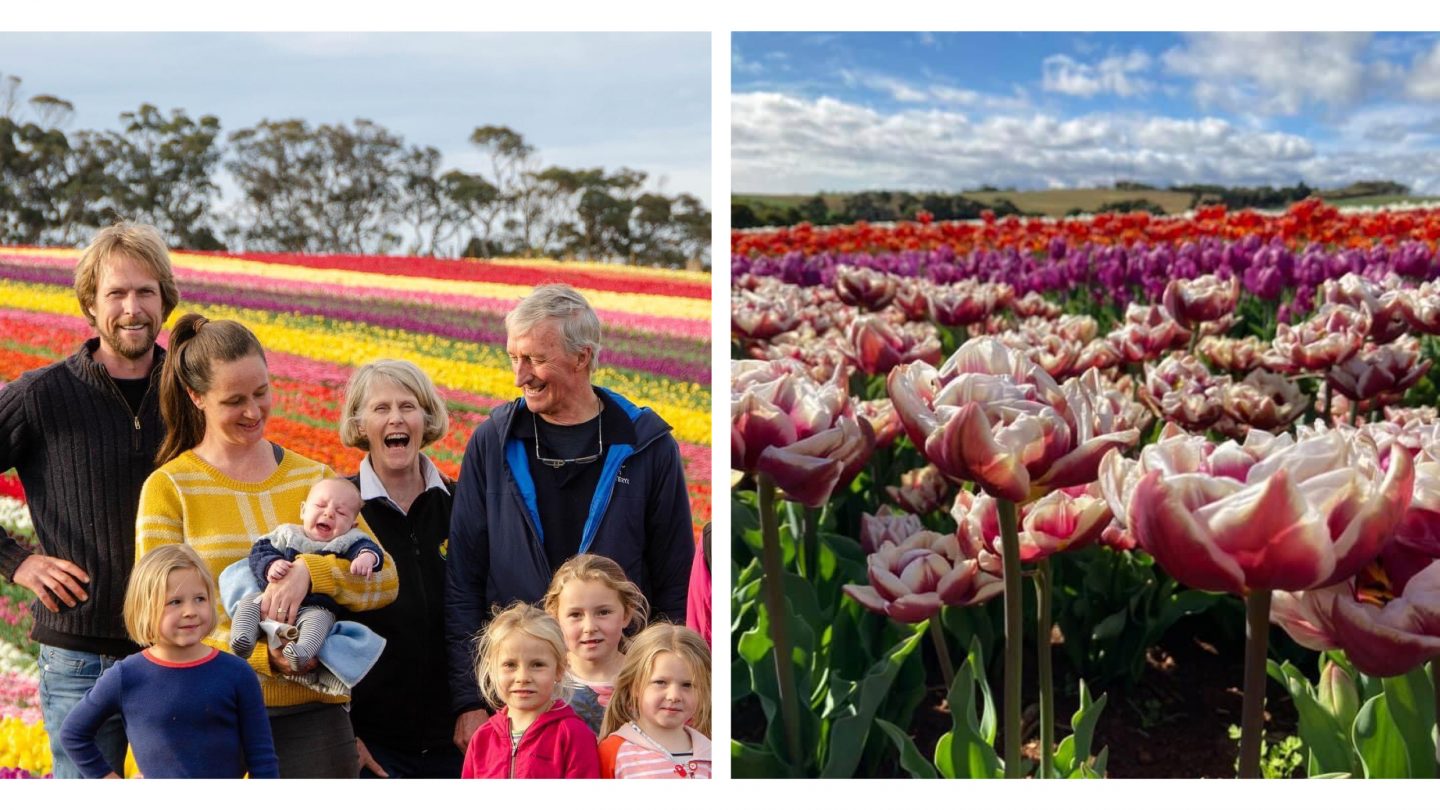 To find out more about Project O visit our website.

More information about Acoustic Life of Sheds can be found here.