A Place Where Water Falls

In the tiny remote town of Sheffield in North West lutruwita/Tasmania in June 2021, audiences gathered around fires sipping broth, surrounded by trees transformed into animated portraits of young people. Inside, people shared the meaning of water, learnt palawa kani words and feasted into the night uplifted by a seven piece soul and funk band and First Nations choir.

“When Water Falls is a meditation on what water means to everyone that’s involved in the project”, says Music Director Jay Jarome on the genesis of this unique project. “I had no idea it was going to be so big”.

“It was really guided by place” says Associate Director Rachel Small.  “Using mountain outlines to inspire melodies, writing on the windswept sand dunes of Black River, getting out into these places and actually seeing the grand scale of the Hydro schemes, it’s pretty impressive”. 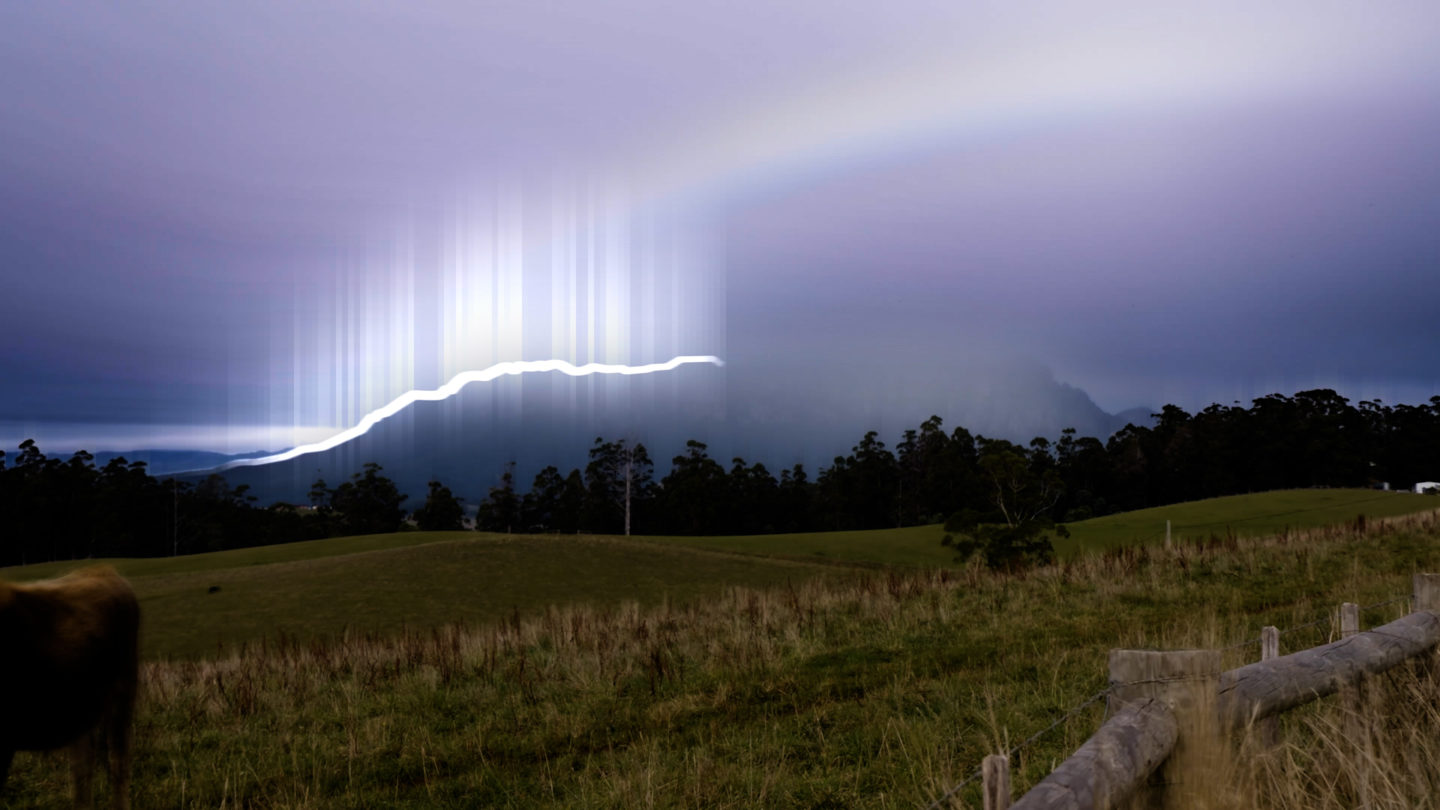 Young People at the Source

When Water Falls began in the North West of lutruwita/ Tasmania with young people, as part of a Big hART initiative called ‘Positive Futures’. Over a 6 month period 100 young people from Wynyard, Smithton and Sheffield engaged in workshops with leading Tasmanian artists and mentors including Jay Jarome and Sabine Bester. They explored the meaning of rain and water and the power of place in their lives, and also discovered new pathways into the renewable, environmental, digital tech and cultural industries through STEM mentoring. Young people were also involved in building songs for the project. 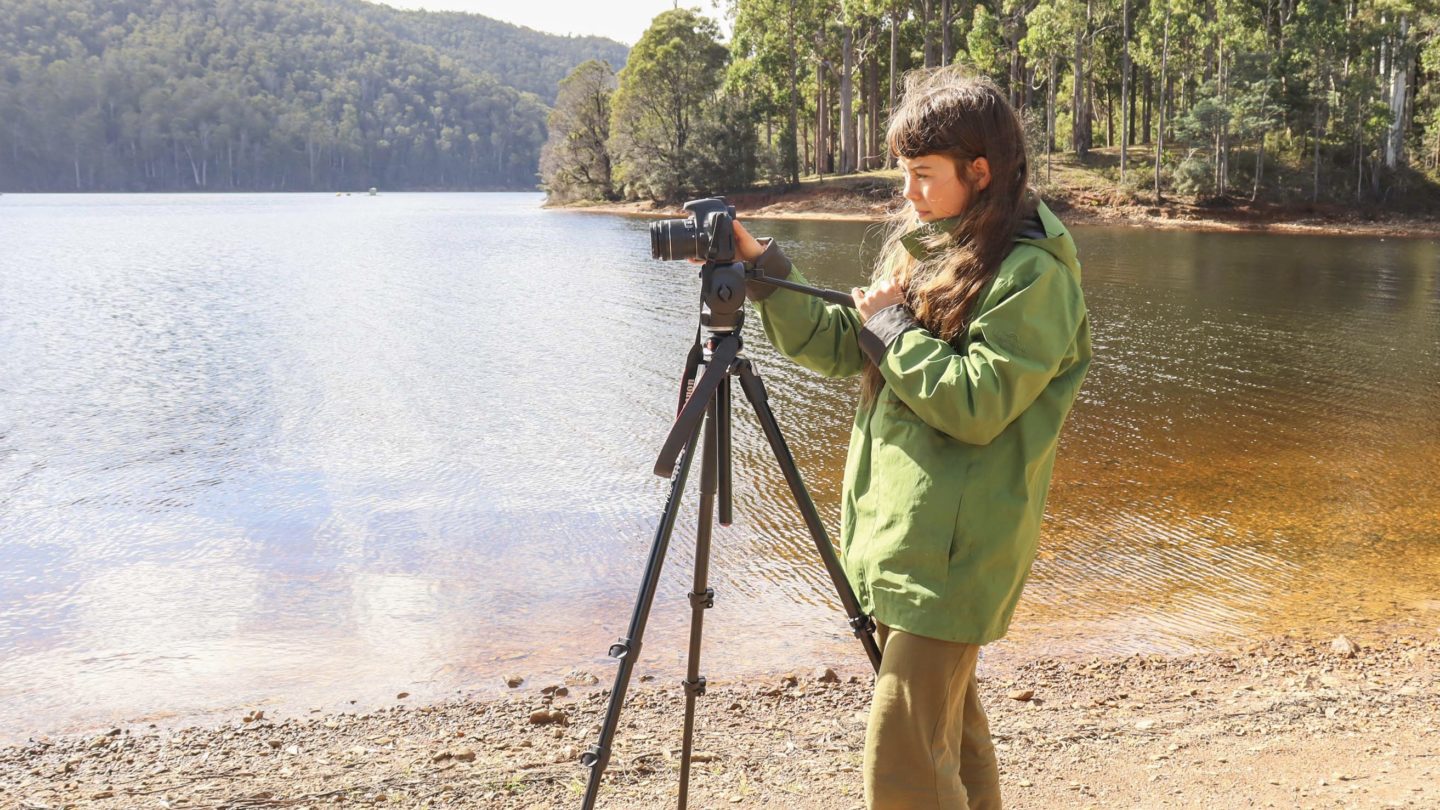 “The young people brought all the inspiration whether it was in the classroom or out in their special places like Black River and Lake Barrington” says Hobart artist Sabine Bester. “It was just awesome to see them being expressive and responding to their surroundings.”

“One of the young people from Sheffield brought forward this line about how the water flows and its pathway, how it evaporates and gathers and splits off in rivers. That idea became the song ‘Shapeshifter’, and just opened the door to all these other ideas that came swimming in”, says Sabine. 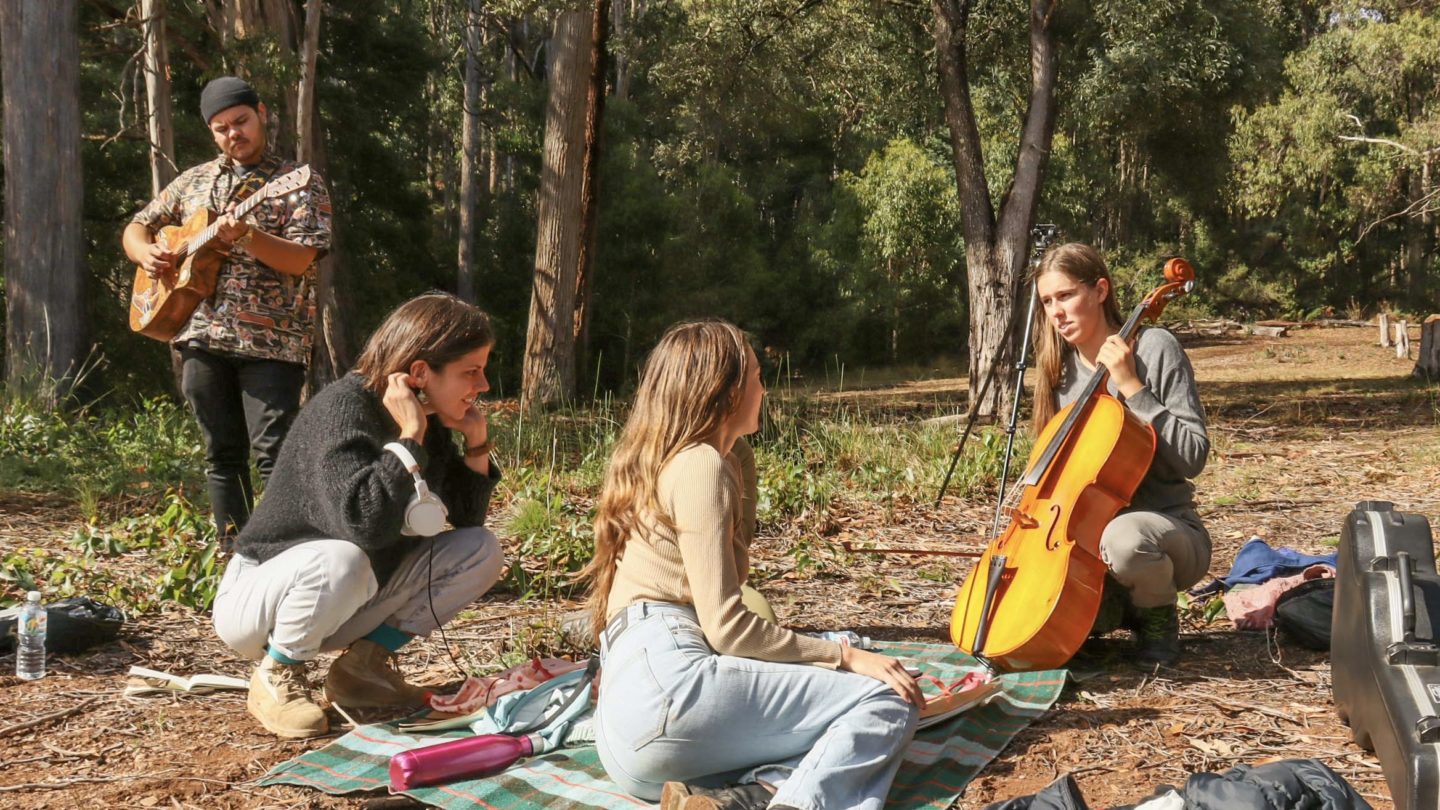 Jay Jarome, a Pinoy/First Nations artist from Bribie Island who’s now based in nipaluna/Hobart says that whilst doing workshops with young people was initially quite intimidating, he soon relaxed into the process.

In Smithton Jay had them writing haikus and Shelby, one of the young women in the project wrote ‘Warm calm evening bathed in pink light’. Shelby couldn’t think of the third line but Jay and Sabine felt it was so evocative that straight away it inspired some chords and a melody. Jay went away and worked on it and a whole song came out of the process. “I feel like I’ve learned a lot from them”, says Jay. 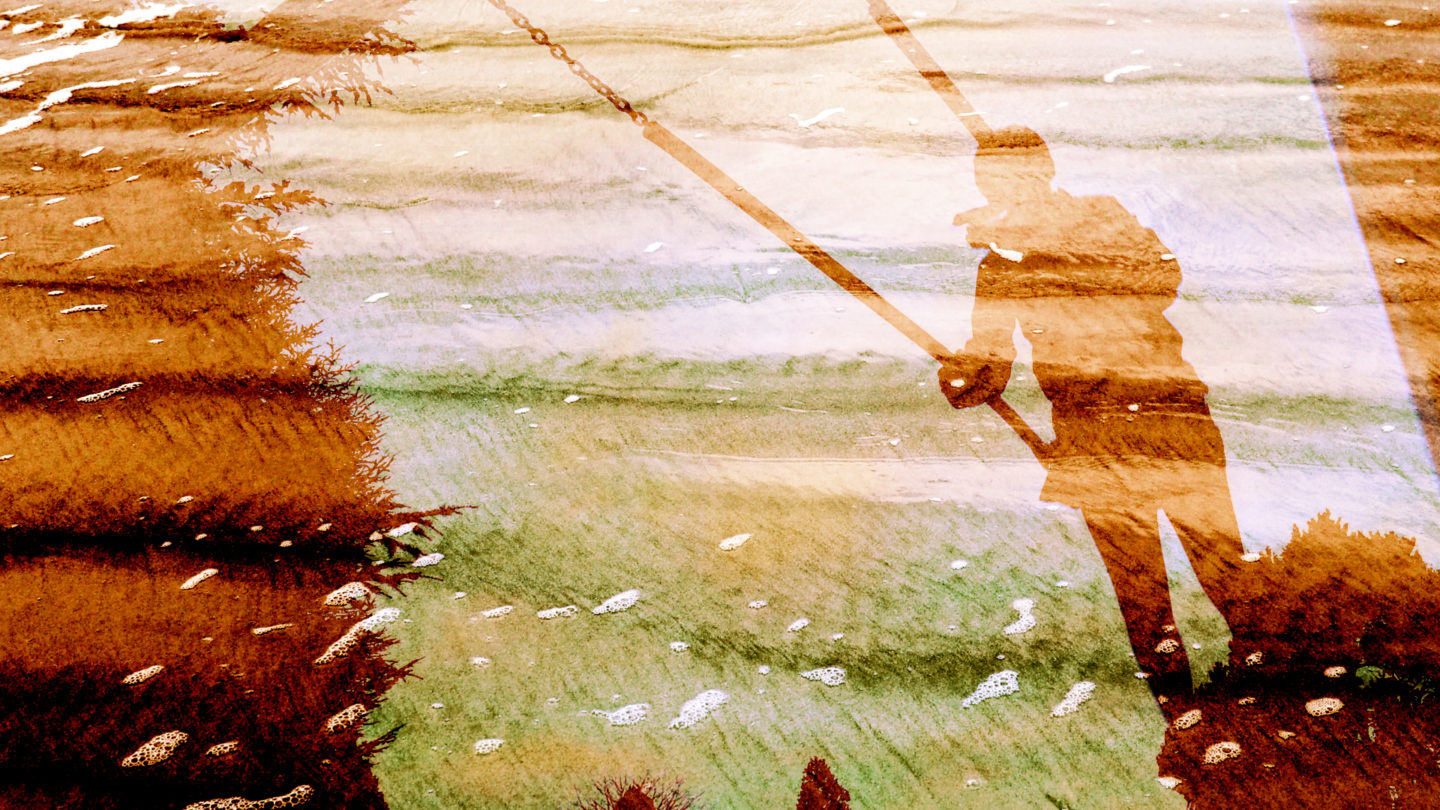 Rachel Small who is also the Youth Programs Producer at Big hART believes that a sense of connectedness and community for young people across the North West was one of the key outcomes which emerged out of the project. “Regional towns can feel quite siloed and it can be a bit smothering sometimes for young people if you’re having issues with your friends or something’s going on” says Rachel.

“Through this project, which engaged young people from separate communities across the coast, they realised there are all these young people out there who share the same experiences and thoughts.” 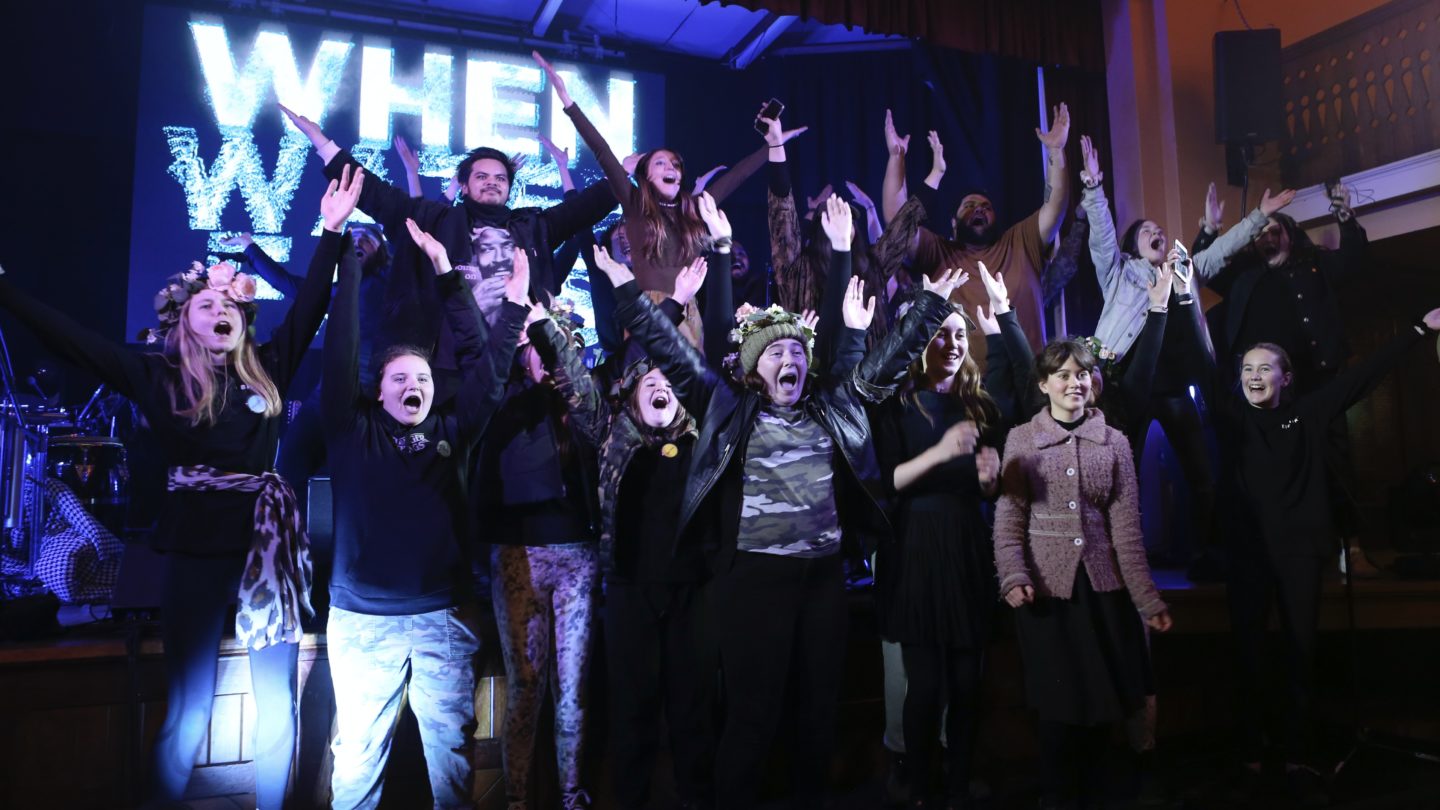 “We had one girl who said that she’d always struggled to make friends and feel part of a group and through this process, really felt like she was part of something. You could see that she was really emotionally impacted by that.”

“I think about this young man who had a lot of anxiety, he would turn up every week to workshops but he didn’t really talk to anyone and he wasn’t very vocal, but by the end he was up on the stage dancing because all the other young people were encouraging him.”

Jay says his Mum had him growing up on 90’s R&B and hip hop. Once he got older and started to dig deeper into where those genres have their roots it led him to funk and soul, gospel and the blues. All these flavours have inspired the suite of 10 songs which eventuated. 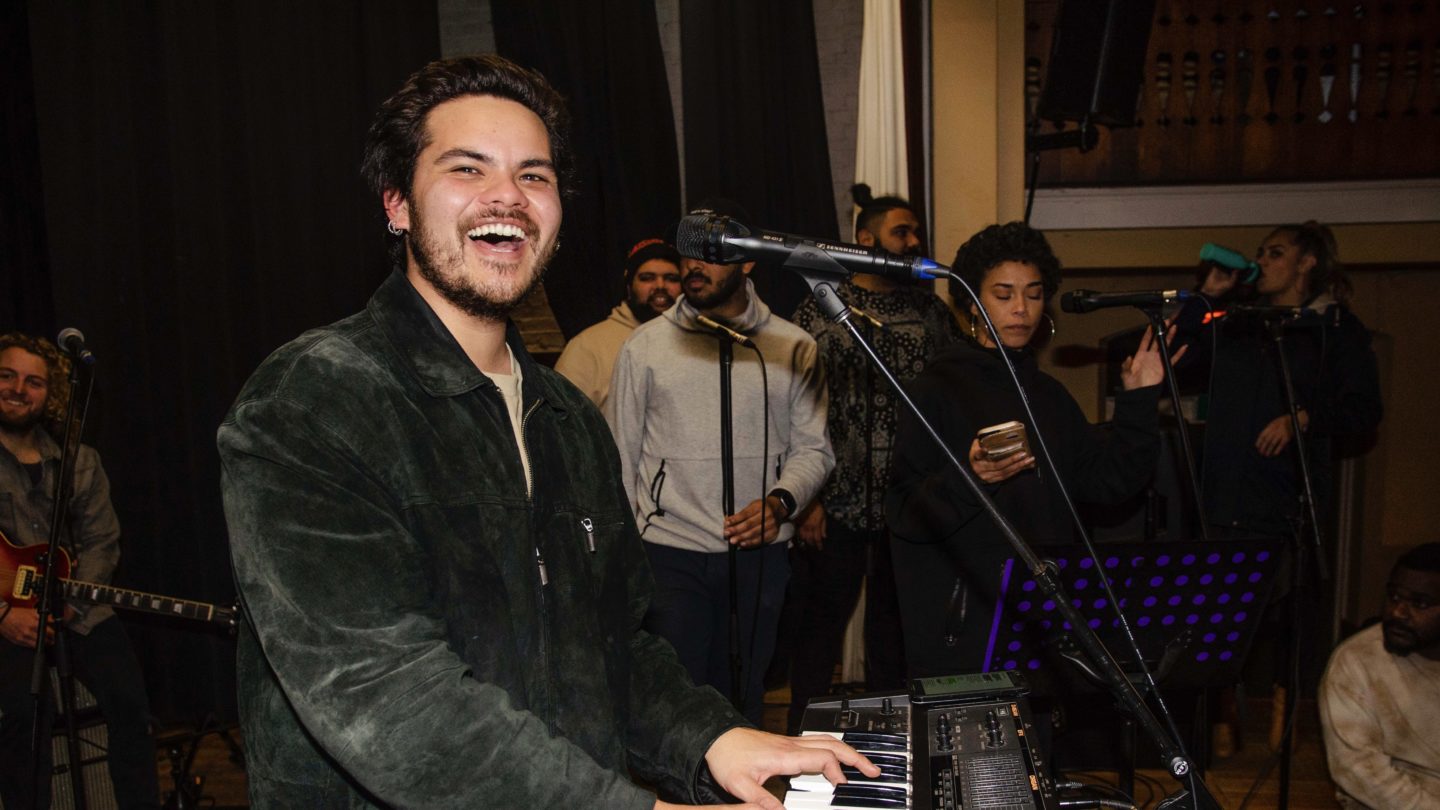 “Most of the chord progressions aren’t really to the typical pop form. We’ve used a fair bit of jazz harmony to create smooth, trance-like moments amongst the funk”, says Jay Jarome. “The song ‘Never Have I Seen’ started off with a guitar riff inspired by that old school Curtis Mayfield kind of groove – and just like Marvin Gaye did with ‘What’s Goin On’, I wanted to write something that would draw people in to dance, but at the same time reflect important social issues.”

Jay says that one of the biggest challenges of the project was writing the material in such a short period of time, but he thinks recording it with the whole crew of 17 artists might prove to be an even bigger challenge. “When Water Falls had me writing almost a whole album’s worth in less than six months”, says Jay proudly, “I think it has the potential to just keep growing, I’m excited to keep watching it evolve.” 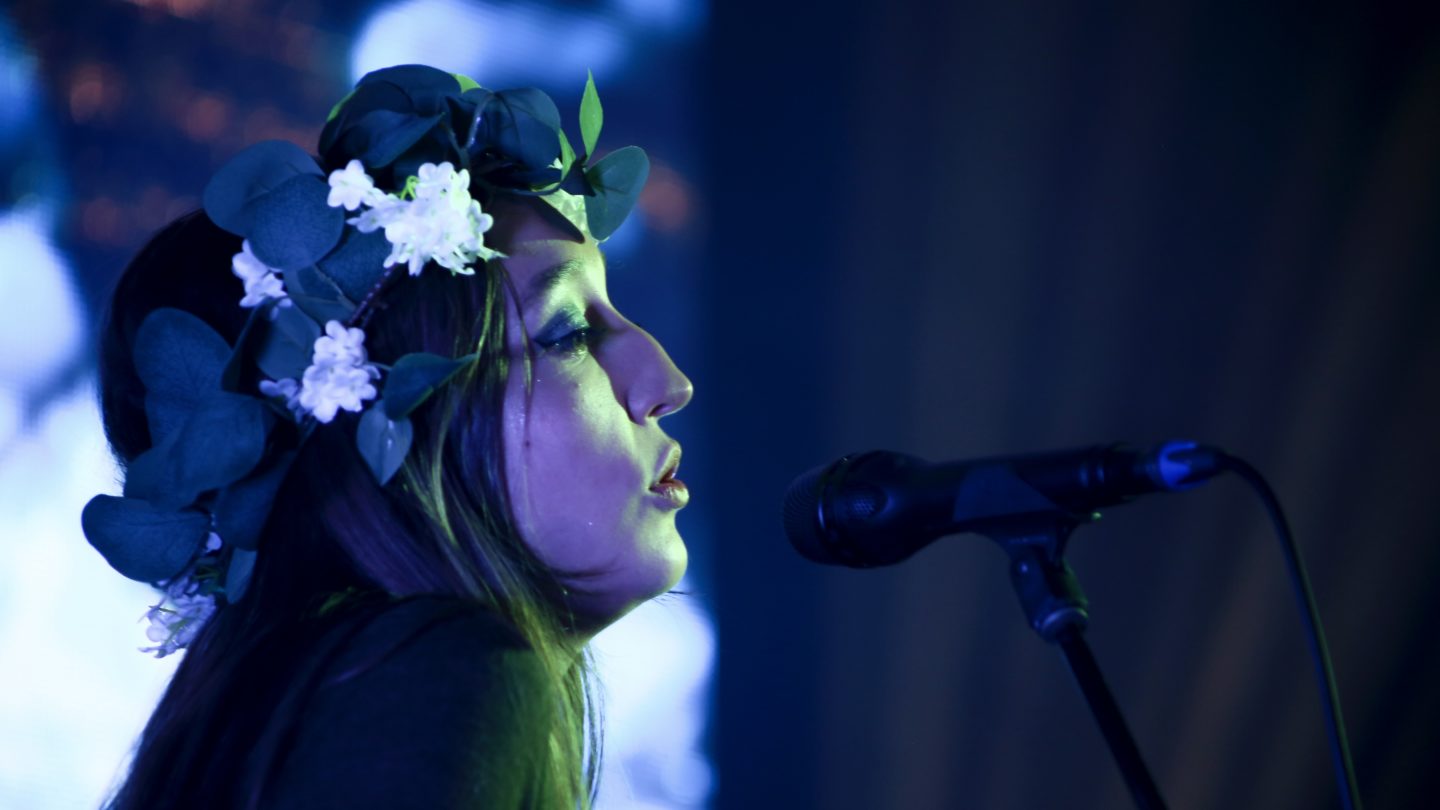 For Sabine a very personal story of loss became part of the songwriting process. She began working on When Water Falls not long after her cousin had passed away from a tragic drowning accident at sea.

“It was quite a traumatic time but giving this story to When Water Falls was cathartic” says Sabine. “It does get emotional for me – every time – but I always feel safe and that his story is really respected by everyone in the ensemble. It doesn’t feel crass to perform it, it feels natural, like everyone on stage is honouring him whether they knew him or not.” 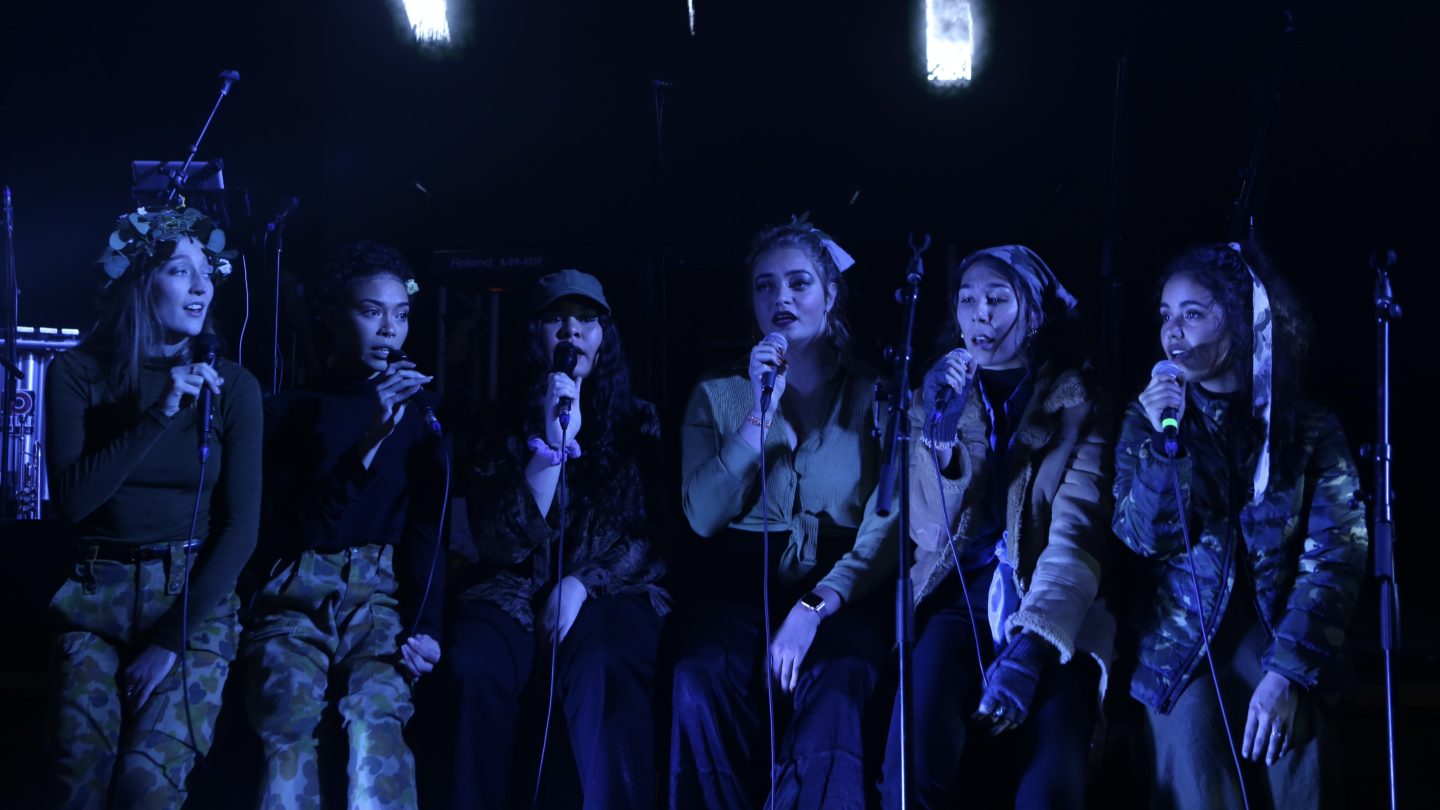 When Water Falls comprises of a 7 piece band and an ensemble of of up to 10 Aboriginal and Torres Strait Islander vocalists, many who have studied at the University of Tasmania’s Conservatorium of Music and hail from Country from all over Australia. Movement Choreographer Keia Mcgrady, a proud Githabul, Migunberri-Yugumbeh artist, is also working with the ensemble and taking their stage presence to a whole new level. It’s an intercultural project and there’s been a lot of learning, sharing and bonding with everyone involved says Sabine. 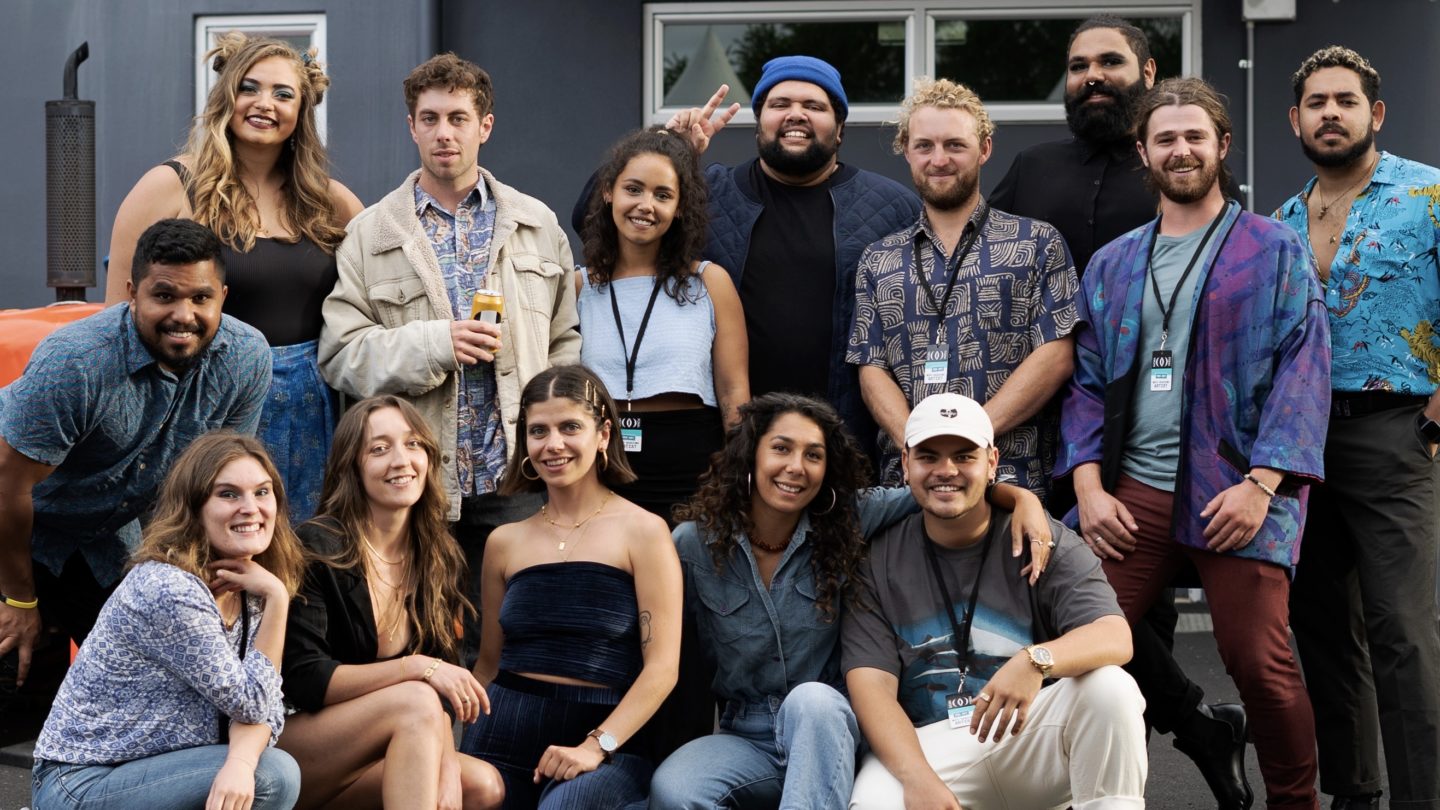 “It’s been awesome to be immersed in the First Nations community of people living here” says Sabine. “I’ve learned a lot from listening and just being in that group. They’re all such incredible, unique people and it’s been really cool to spend time with them and build friendships, to be a part of it and feel welcomed.”

“The connection that we all have together as a unit, from studying together and sharing culture, sharing pain, sharing so much. We’ve been growing together for more than eight years” says Jay Jarome. “To be able to get up on stage with them and connect through such a positive show, it’s great.” 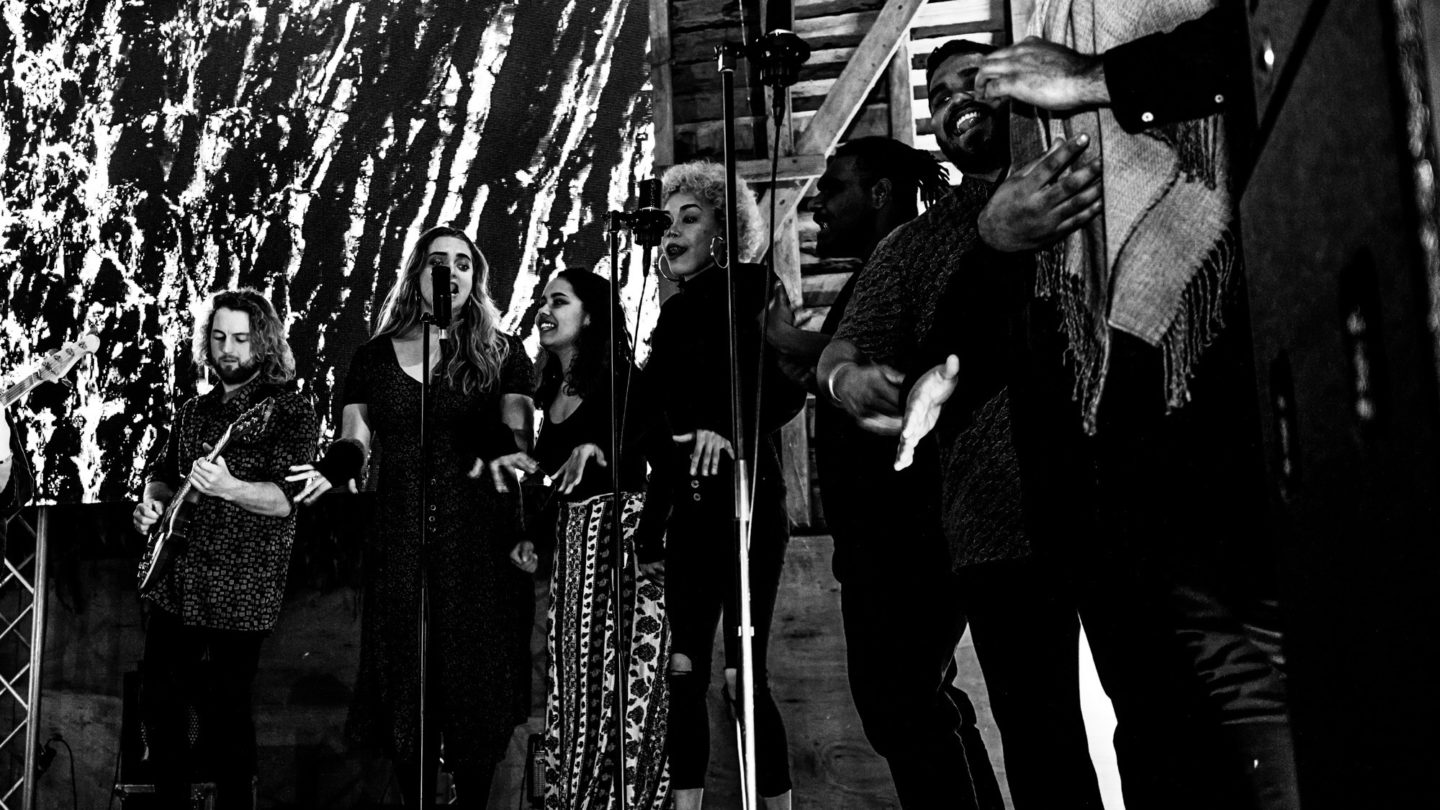 “I think there’s something that happens when you listen to a big group of voices, a choir, something that goes straight to your belly and your heart” says Rachel Small. “It’s just joyous and enveloping to have this soulful, authentic suite of songs performed by such a large and young ensemble.”

When Water Falls has a strong connection to the North West, whether it’s the immersive audio visuals designed by Anna Cadden and Jordan East, the spectrogram work inspired by Mt Roland, or the food served up by young chefs on the evening at the premiere in Sheffield.

“If we’d developed this project anywhere else it would have been quite a different project” says Rachel Small. ”To be in Sheffield which has this mountain that looms over you every day, it becomes a character in the town itself.” 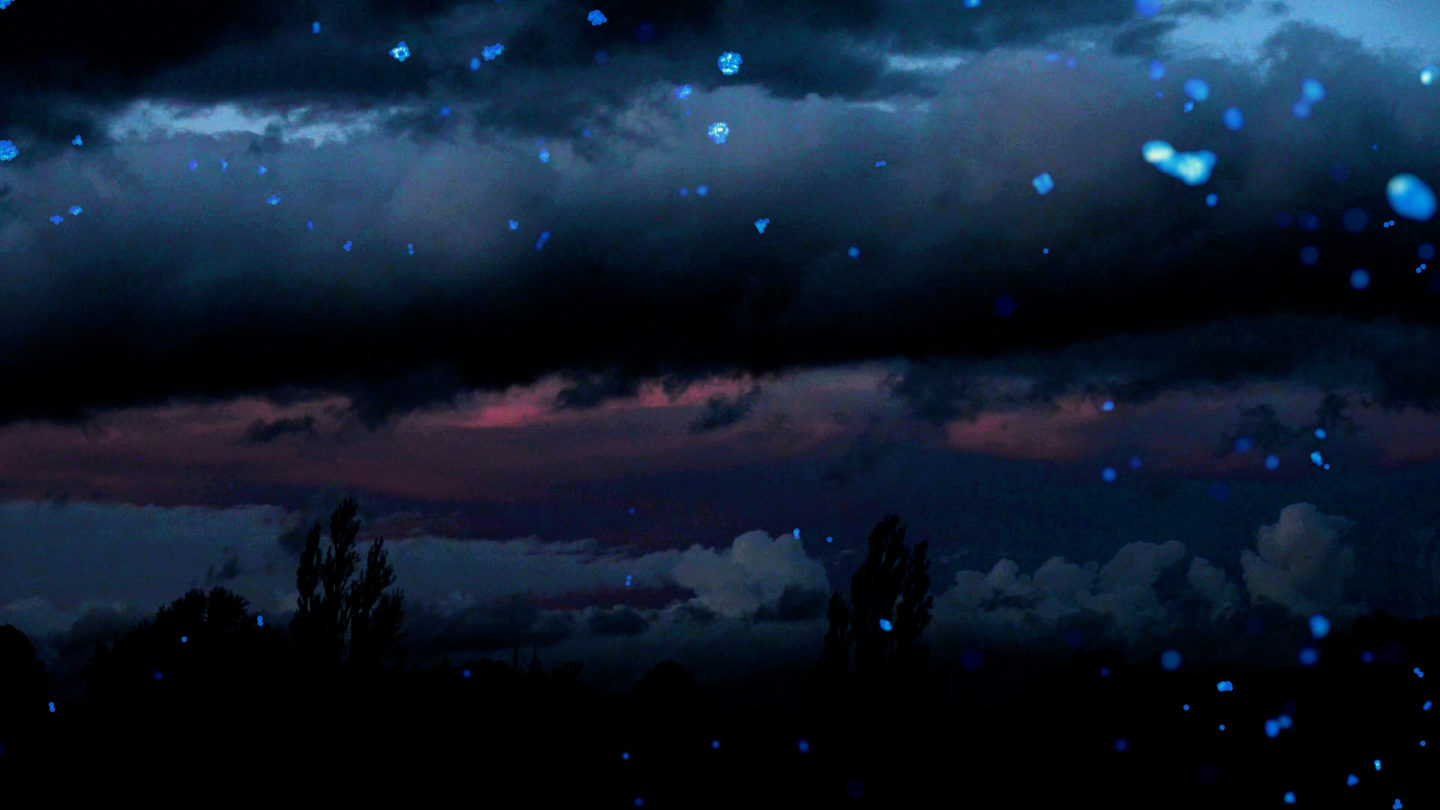 Rachel and the production team challenged the chefs to provide a menu which was seasonal and tied in with the natural cycles of water and seasons. They explored the different ways water can manifest in a meal and what it can bring you through taste, touch and emotion.

“The feasting element began with a broth which is a comforting version of water, quite basic and primal and comforting”, says Rachel. “Then we moved to seasonal vegetables which have been grown in the earth with the cleanest rain in the world in North West Tasmania, showcasing the beautiful produce that we grow in the North West.” 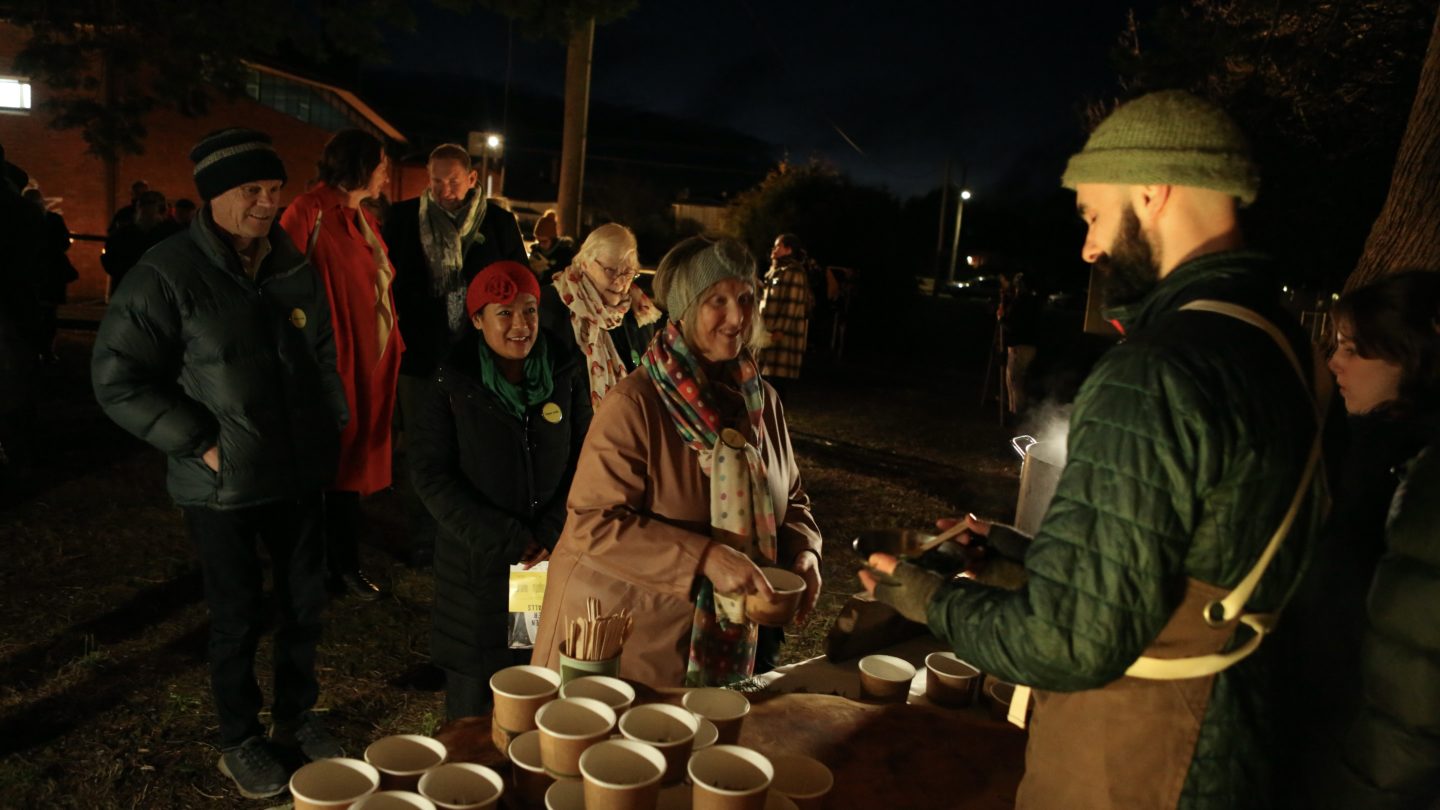 Sabine Bester grew up in lutruwita/Tasmania and says that returning to the island after years of travel and exploring the importance of place through When Water Falls has been profound.

“In the When Water Falls songs, there’s a lot of environmental issues touched on”, says Sabine. “We understand how precious this wild state is, and there’s this sense of custodianship – you want to protect it and care for this place.” 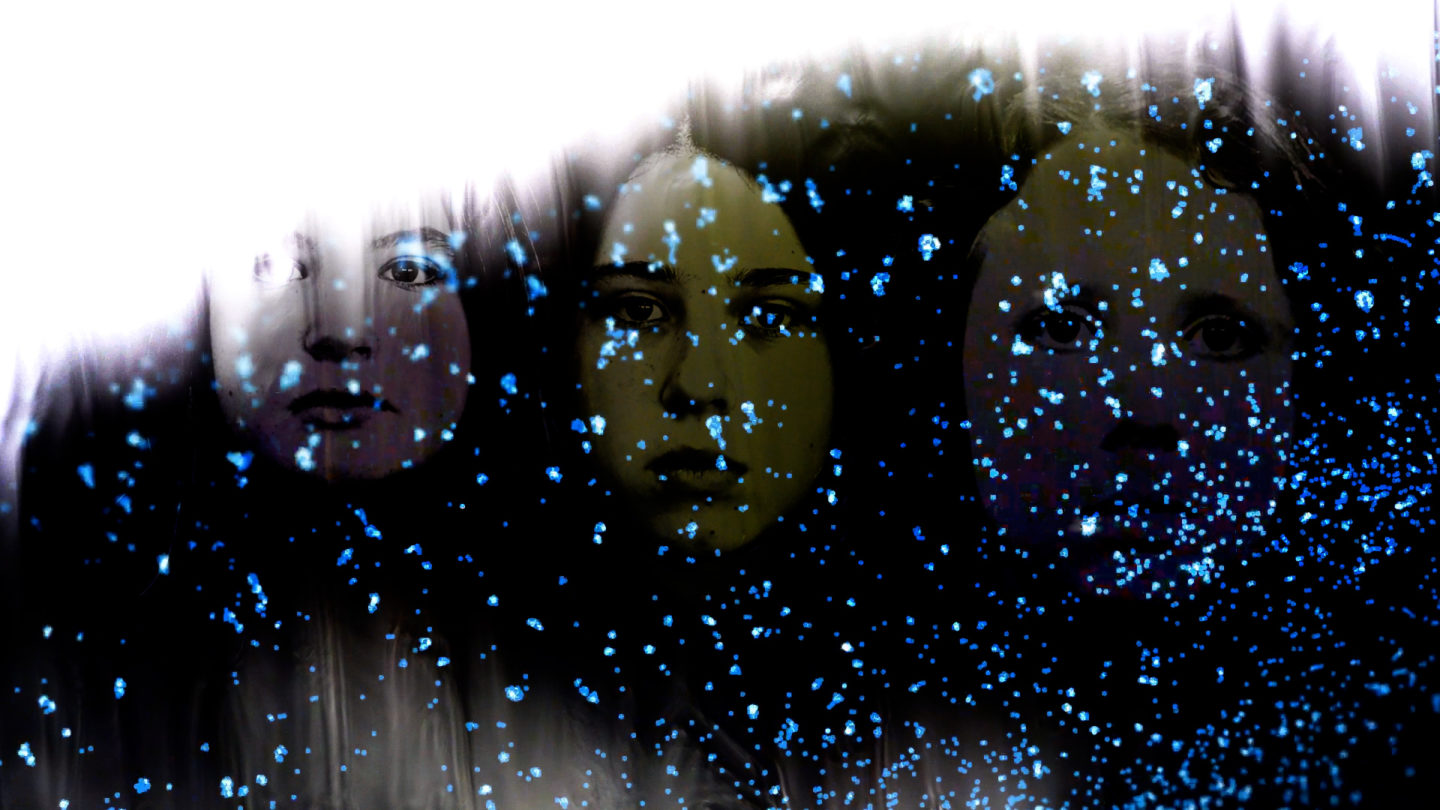 Rachel says that it’s been exciting exploring place with young people, who carry place so innately without realising.

“Young people here often don’t realize the connection that they have to their environment, there’s always a sense of wanting to get out and move away. When you dig a bit deeper, young people’s lives revolve around the environment – biking in the bush, camping with their families on the West Coast. They’re really outdoor, connected lifestyles.” 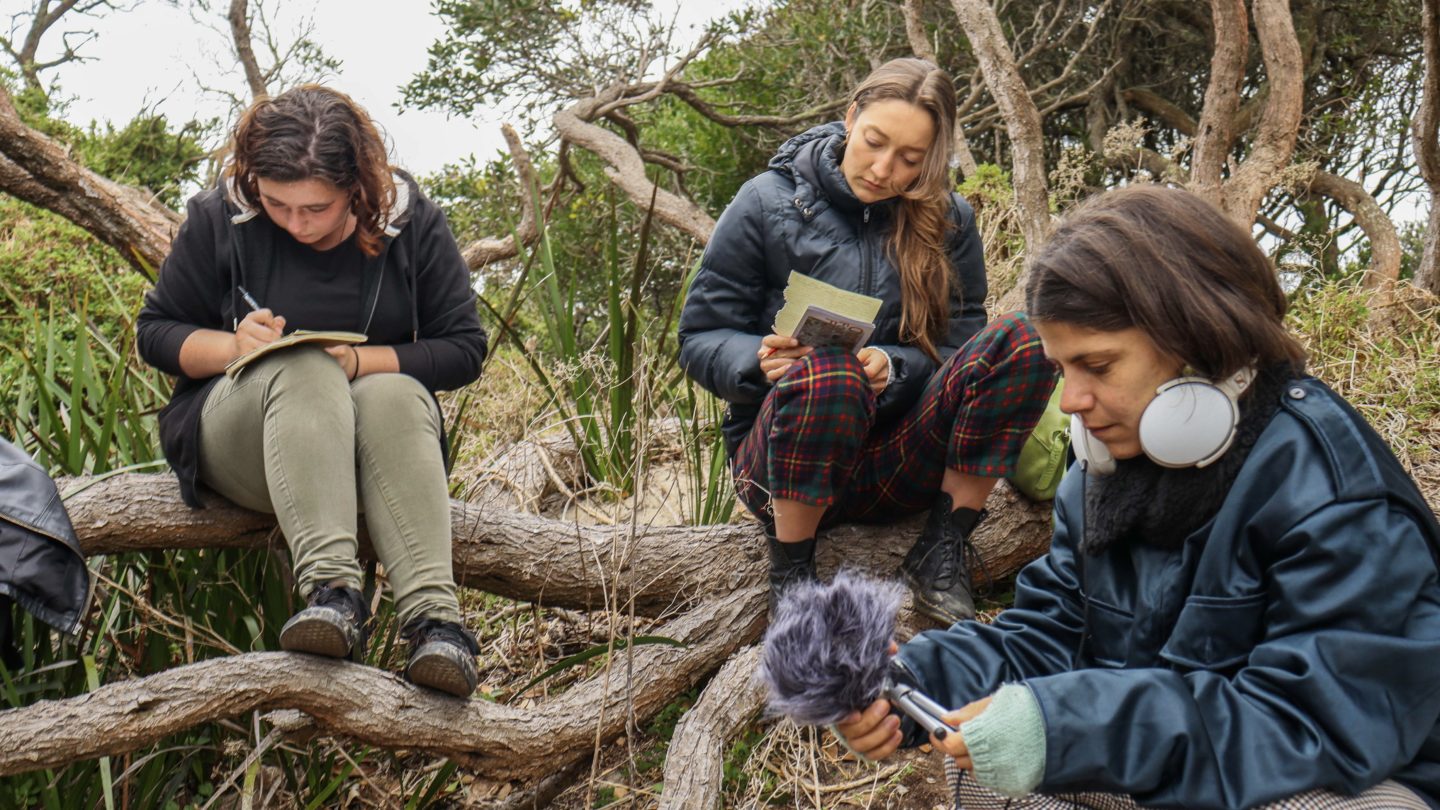 For Jay, coming from Queensland he sees that Tasmania has done a great job maintaining its natural beauty. He hopes that during this time of expansion people think carefully about the way they carve their homes into the land, and believes First Nations people have an important role to play in the future stewardship of Country and ecology.

“This planet can’t survive with typical Western ideologies, we need to listen to all First Nations people including the Maoris and the Native Americans, because all of these different cultures have different ways to look after the earth in sustainable ways”, says Jay. 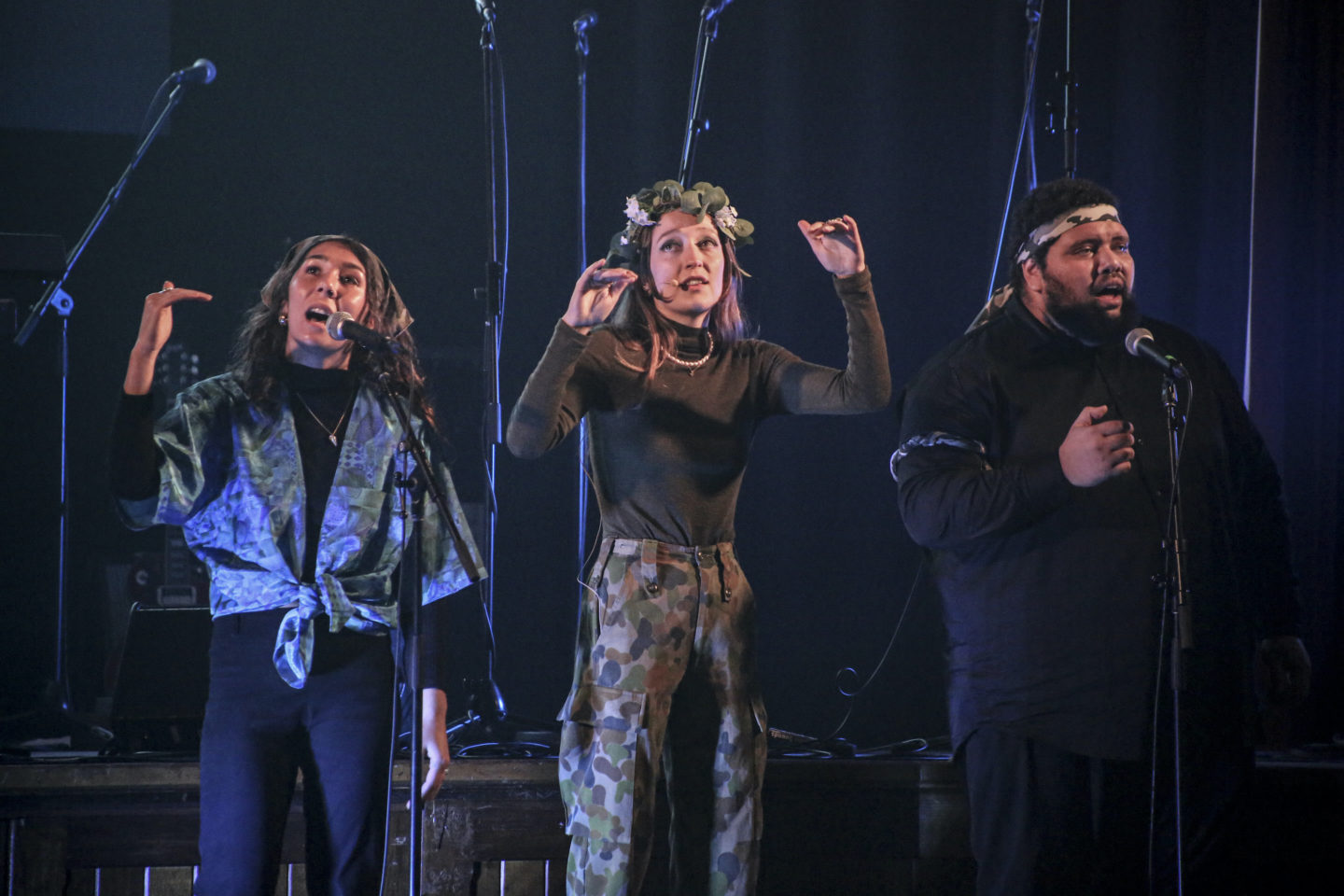 “You can try and make it up yourself or you could just learn from these people who’ve been doing it for generations.”

Jay only discovered his Aboriginal heritage as a teen and says that the project has inspired him to work harder than ever in finding the missing leaves of his family tree. “It’s been challenging feeling a sort of responsibility to amplify First Nations messages in the project, but it’s also pushed me to find out more”, says Jay.

When Water Falls is part of a large scale series of works Big hART is developing called ‘Kelp Pollen Rain Soil’, which examines key elements of Tasmania which could hold the answer to mitigating the risk of climate change. 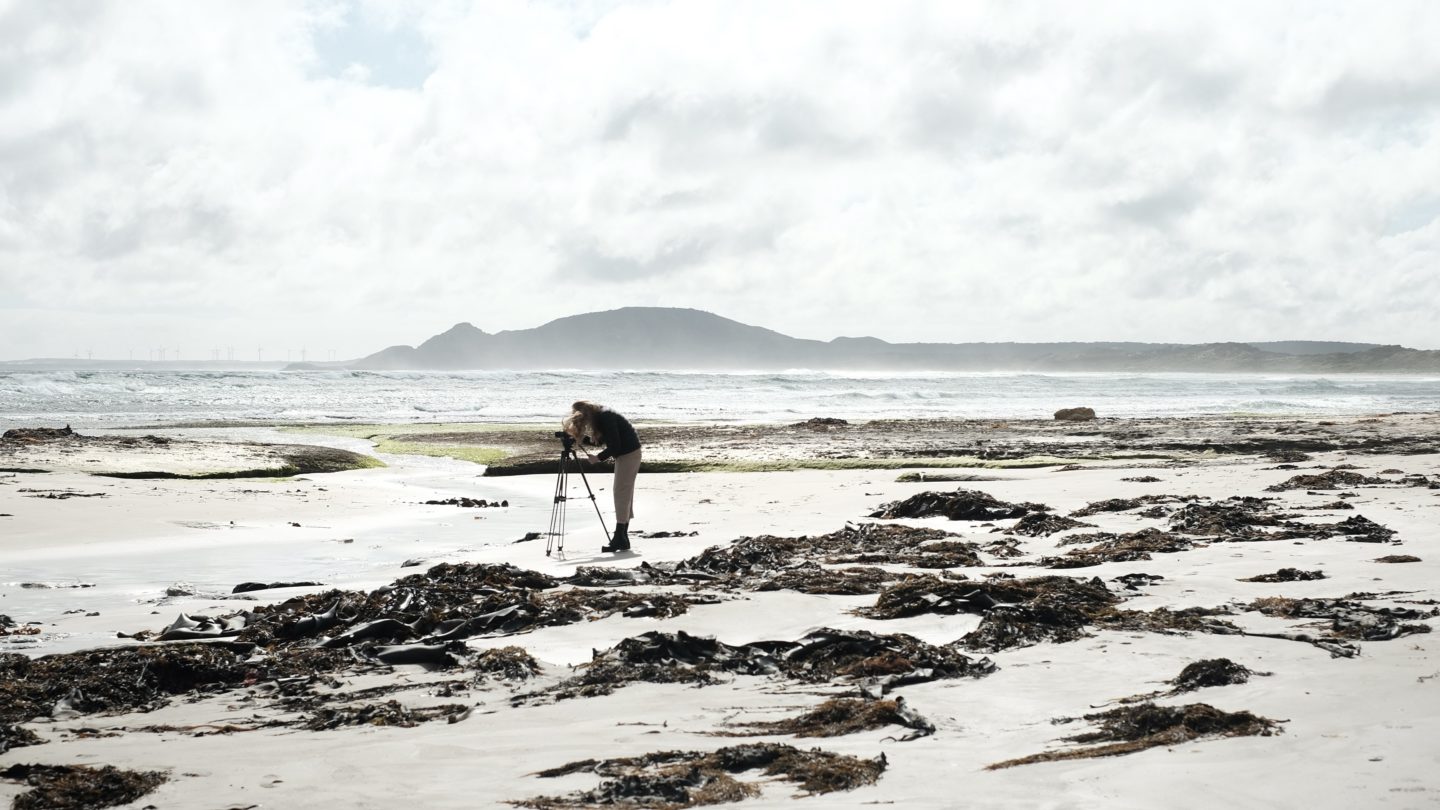 Jay believes art has a role to play in shaping the future of lutruwita/Tasmania, but it doesn’t have to be didactic. “Art isn’t there to solve problems, it’s like a pain signal”, says Jay. “If you’ve got something wrong with your body you feel pain. If there’s something wrong with society art will reflect that.”

For Sabine, she has thoroughly enjoyed all facets of the project – from the ambitious multi-space installation and performance in Sheffield, to being one of the shed performances of Acoustic Life of Farm Sheds at AgriCULTURED in Launceston, to performing to a joyous dancing crowd at Mona Foma in nipaluna/Hobart. Coming up, there are two festivals planned for 2022 already, plus an album. 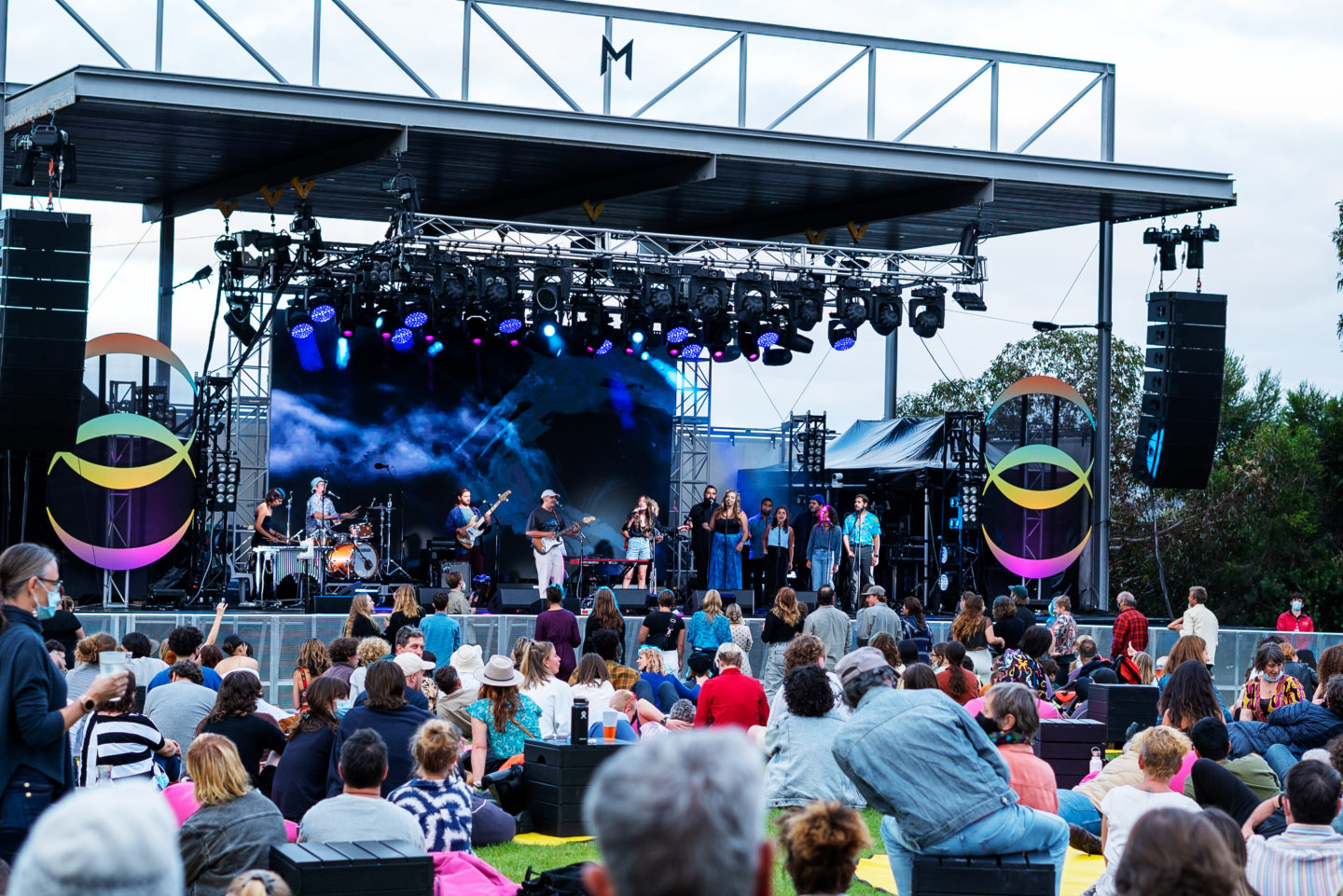 “I’m looking forward to travelling with the crew, playing as many shows as possible, and developing more songs”, says Sabine. “I hope we can continue the conversations about water, the environment, First Nations people, and around love and family and life. I want it to go forever. I want to sing these songs until I’m no longer able to sing, until I’m shrivelled up”.

Positive Futures was supported by Hydro Tasmania and TasNetworks.

Big hART acknowledges the guidance of the Tasmanian Aboriginal Centre in this work, and the importance of palawa kani to all our futures.