Cultural Healing in Songs of Peace

Senior Banjima man Angus Smith is passionate about cultural healing through music. A gifted musician, singer-songwriter and recording producer based in Roebourne, Angus Smith has been playing music for over 35 years and has been involved in the work of Big hART from the Murru Project in 2014 through to Songs for Peace. Today he reflects on the important role music played at the 2020 Songs for Peace, and where it can take his community.

“Everyone knows that to feel better when they’re hurting is to talk about it. We need to write our emotions down and express it…The song I wrote for John Pat, it’s written in the wind forever. That’s what songs are about, they carry on our culture.” -Angus Smith 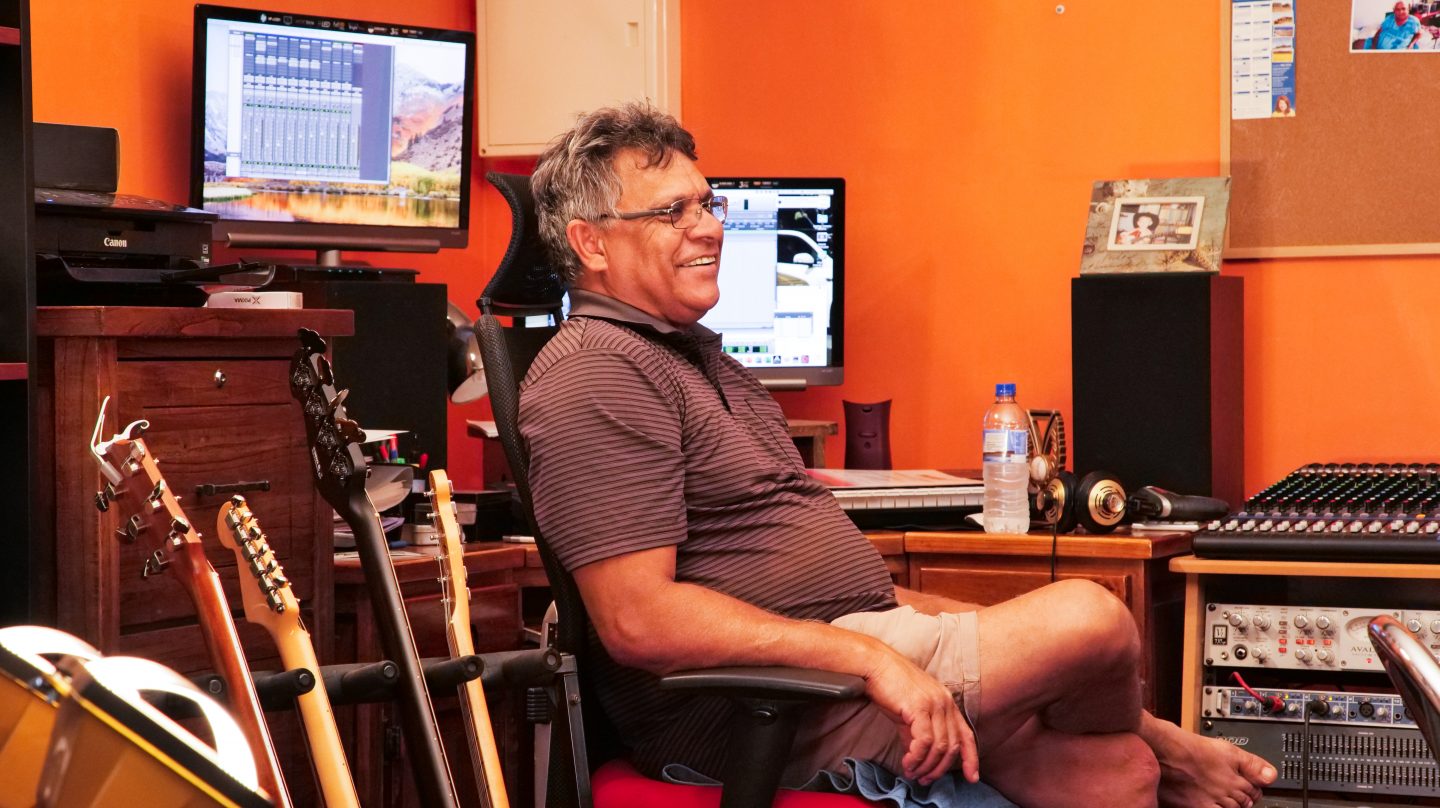 My name is Angus Smith. I’m a musician, I’ve been playing for over 35 years. In my time I’ve drifted from music to songwriting, which was a good thing for me because it helps me to express myself, release some tension and tell stories. I thought, I want to be a recording person, I want to be able to record people, whether it’s just songs or even stories. So that’s what I do now, in my home studio, as well as writing songs and putting music to those songs.

I’m a Banjima man. We reside in Roebourne. That happened many years ago when everybody was taken from the bush and put in towns like Onslow, Roebourne and Hedland. Banjima is a tribe that comes from the other side of Tom Price, north of Newman. That’s where my tribal lands are. Karijini – that’s Banjima country.

I have lived in Roebourne most of my life. My old man and Mum came to Roebourne in the 60s and settled in the late ’70s/ early ’71. My family never really lived in stations or out-camps, they lived actually in the bush – roaming around and working in the bush. 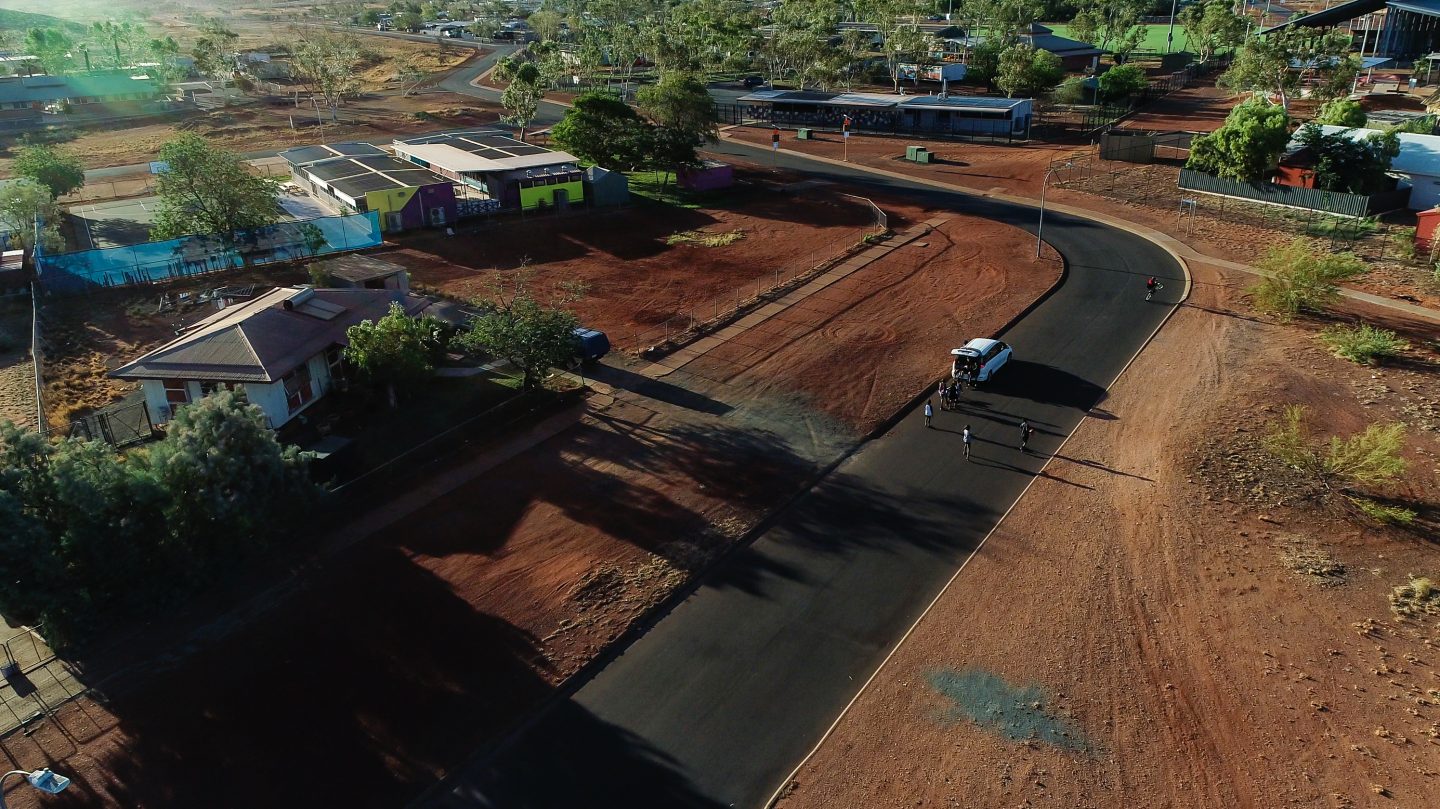 Roebourne is a small town which has a lot of issues, but then a lot of towns do. What keeps me in Roebourne is that my old people have lived here for so long. We’ve grown close to a lot of our family members from Roebourne – Yindjibarndi, Ngarluma, Thalanji – they’re all mixed up here living. We see the children from those Elders still living in Roebourne. Every family has a hero, someone you look up to, and their stories are in the families. We want to keep that alive, and we do that through song.

What attracted me to work on the Murru Project was that a story had to be told about John Pat and who he was. 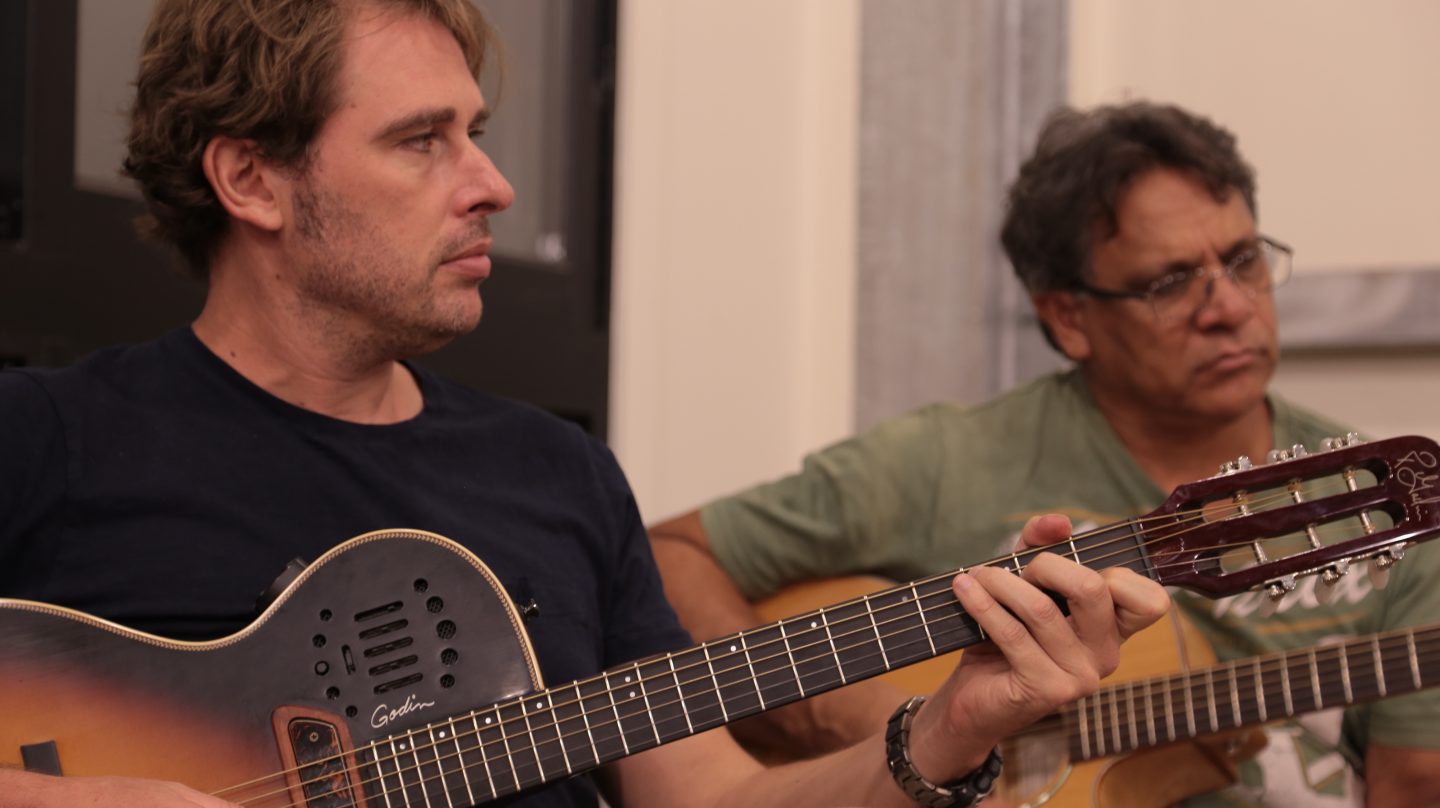 The story had to be told, and John Pat shouldn’t be forgotten, you know you’ve got to carry that on and say, he was wrong dealt by. Big hART started that off and that was a good thing, and that’s what attracted me to the project. 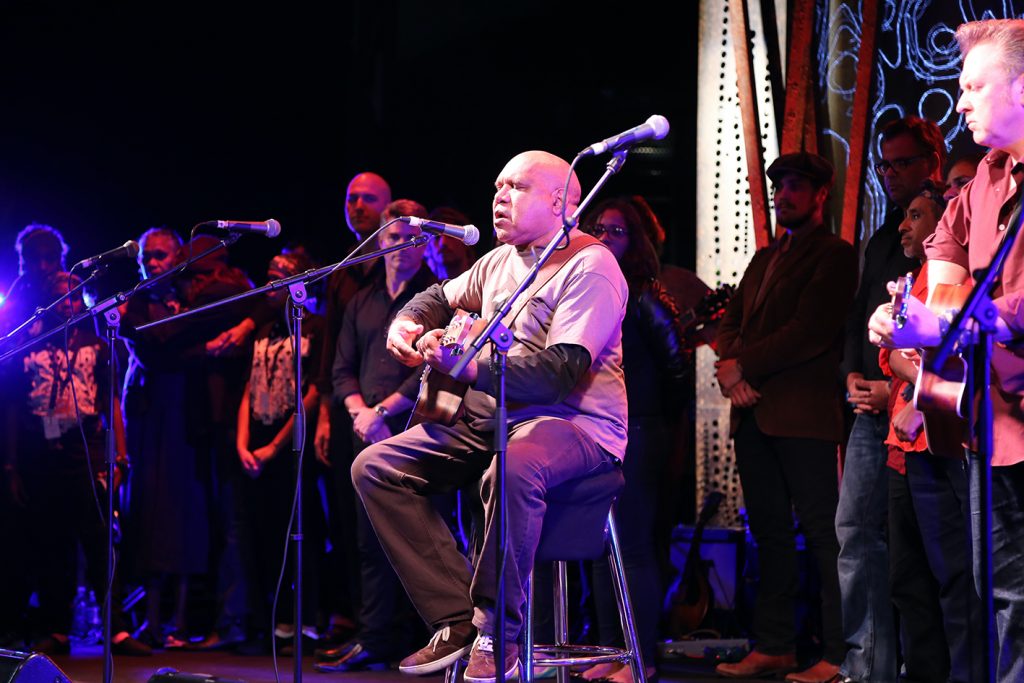 Songs for Peace is a good way to ventilate the emotions, whether it’s good or bad or wherever they are at. Sad stories make up a lot of the songs, but we also have to carry that through and make sure that we learn from the stories, say this is what’s happened, and we shouldn’t let this happen. Big hART is a part of a healing process, but there’s got to be more to what we’re doing, it’s got to be ongoing. 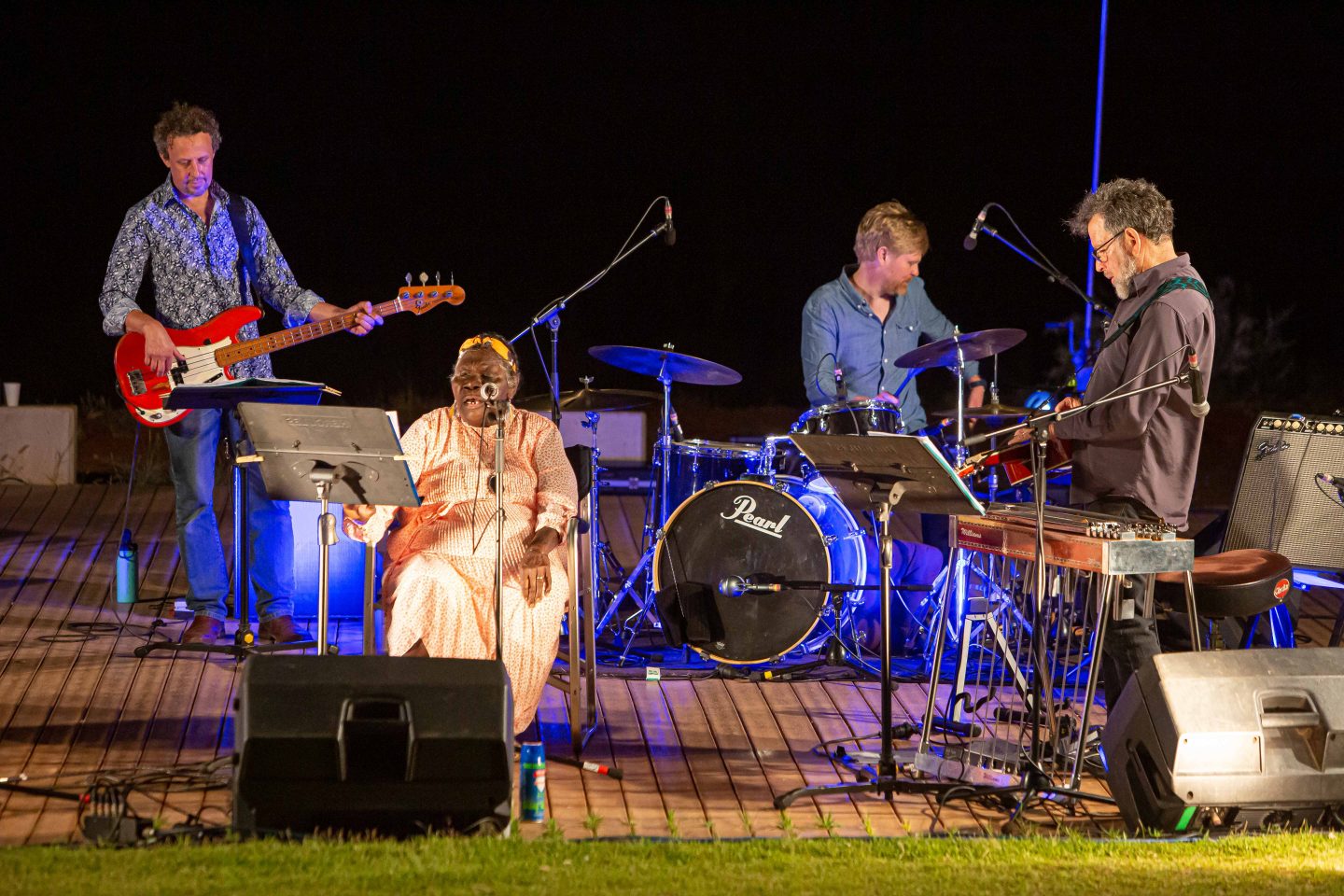 When you look at Songs For Peace today, you can see where people are writing about a family member they’re longing to see again, possibly passed on or moved away, whatever their reasons are, but they get to write a memory, sing a memory. It’s like the song I wrote for John Pat, it’s written in the wind forever. That’s what songs are about, they carry on our culture. 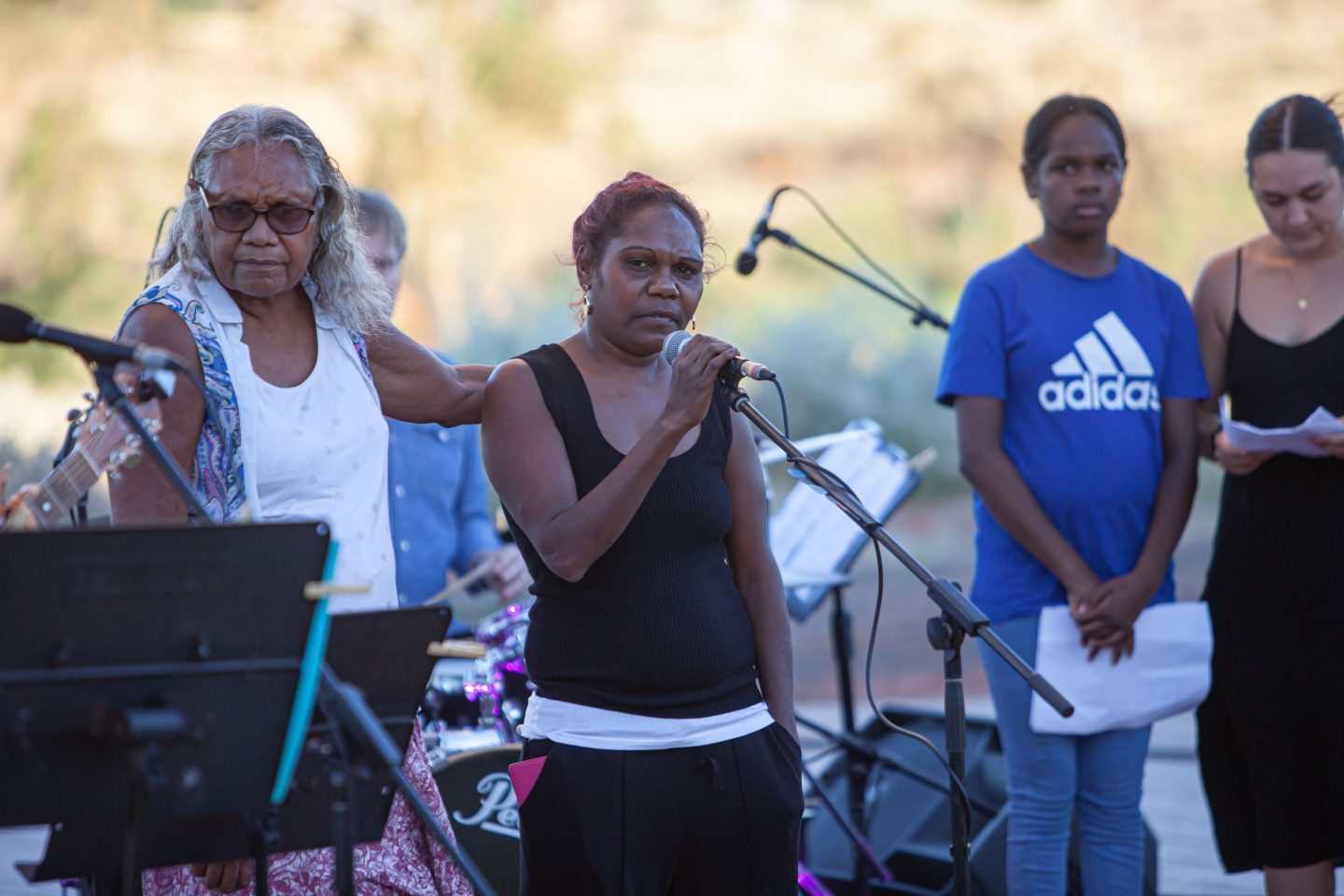 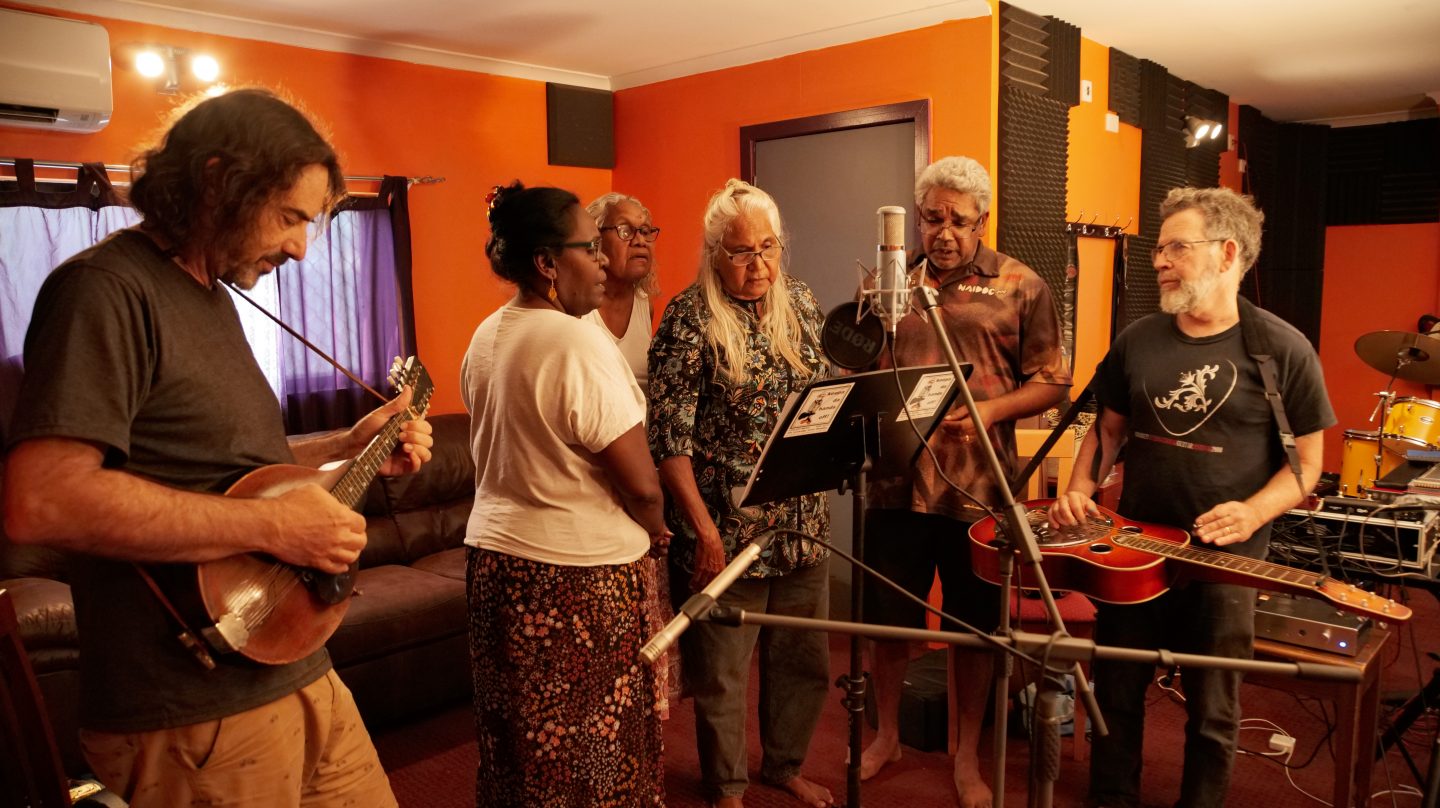 They claim what they write, because it’s theirs. They actually want to see a CD done with all the tracks they’ve written in the last five years, put it on the CD and say ‘this is our songs, our stories’. 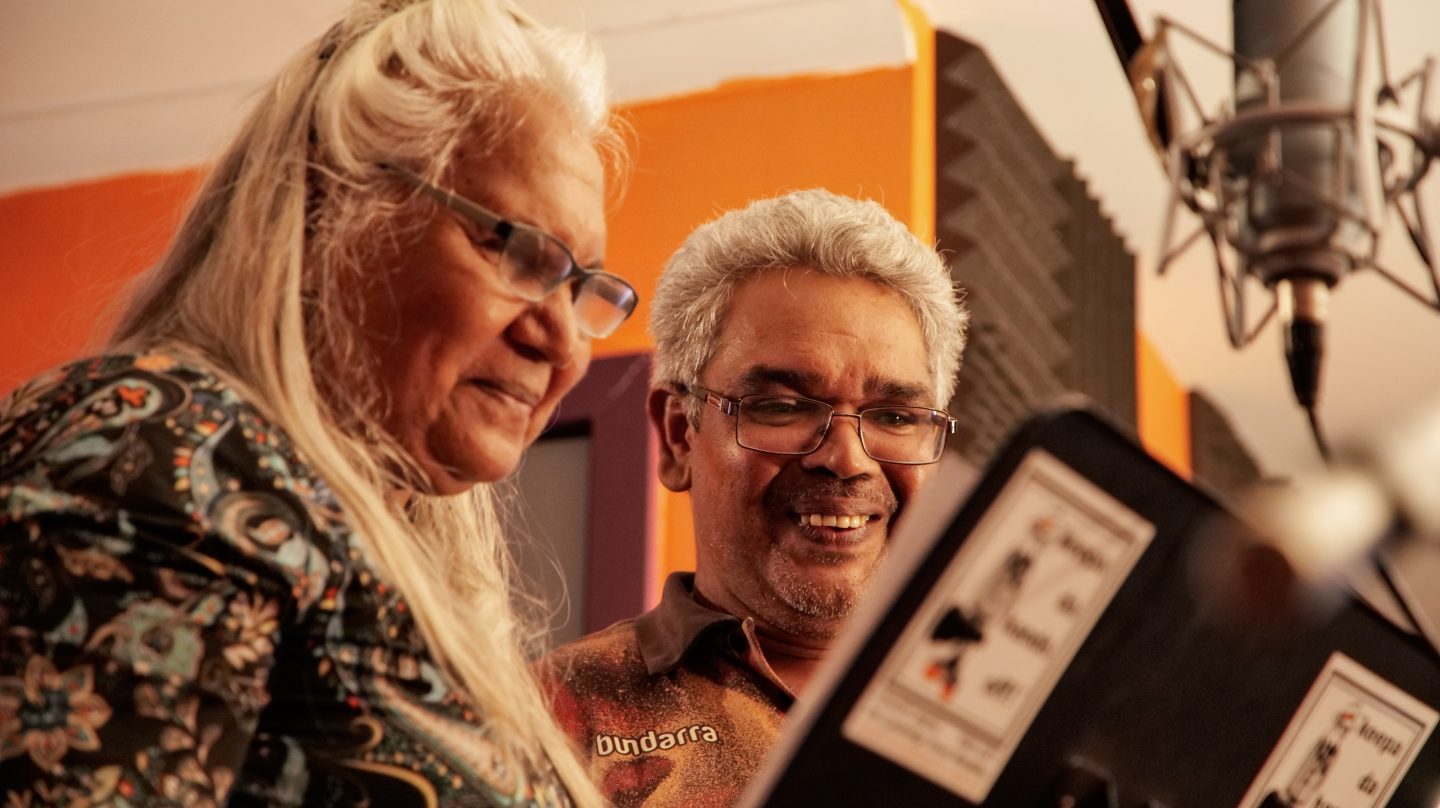 Everyone knows that to feel better when they’re hurting is to talk about it, and talk about it for the right reason. You can bring something that could have been on your mind for a long time and write it down on paper. You just put it down, it doesn’t have to be a poem, it can just be words about where you’re at, what you’re longing for. Maybe it’s longing for our old people, or land we used to live in when we were a child. I call it the happy place, where we’re feeling the most happiest at that time, and out of that you can build a good song. 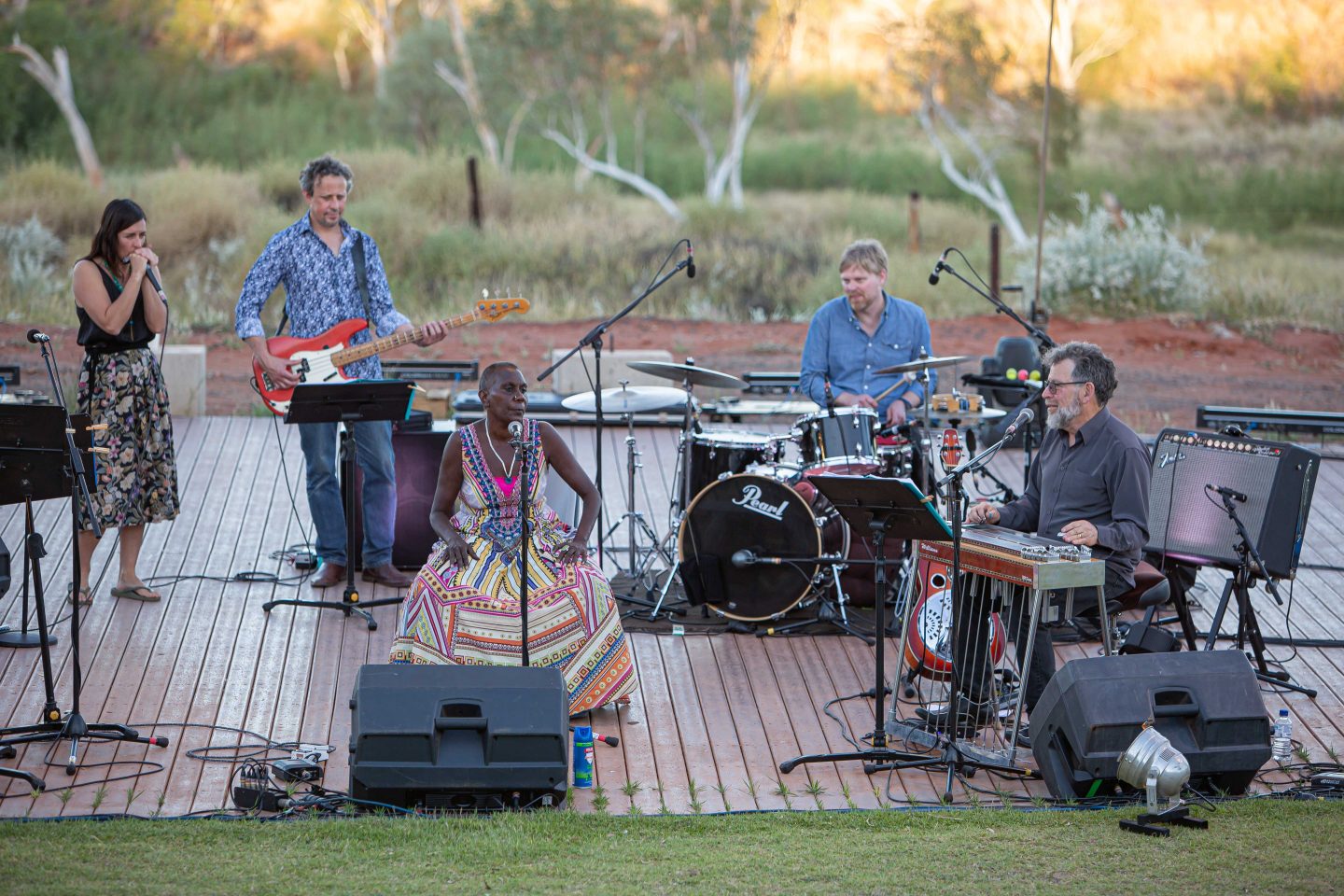 Lois Olney (centre), Ngarluma jazz artist and a member of the Stolen Generation returned to Roebourne to perform for Songs for Peace 2020. Photo: Courtney McFarland

People can express themselves through music and through art, it doesn’t have to be all through music. If you look at art and what people paint or draw, you can actually see where their mental state is. I’ve been trained in that area so I can look at someone’s writing and art and I can say that person’s fine, or hurting. 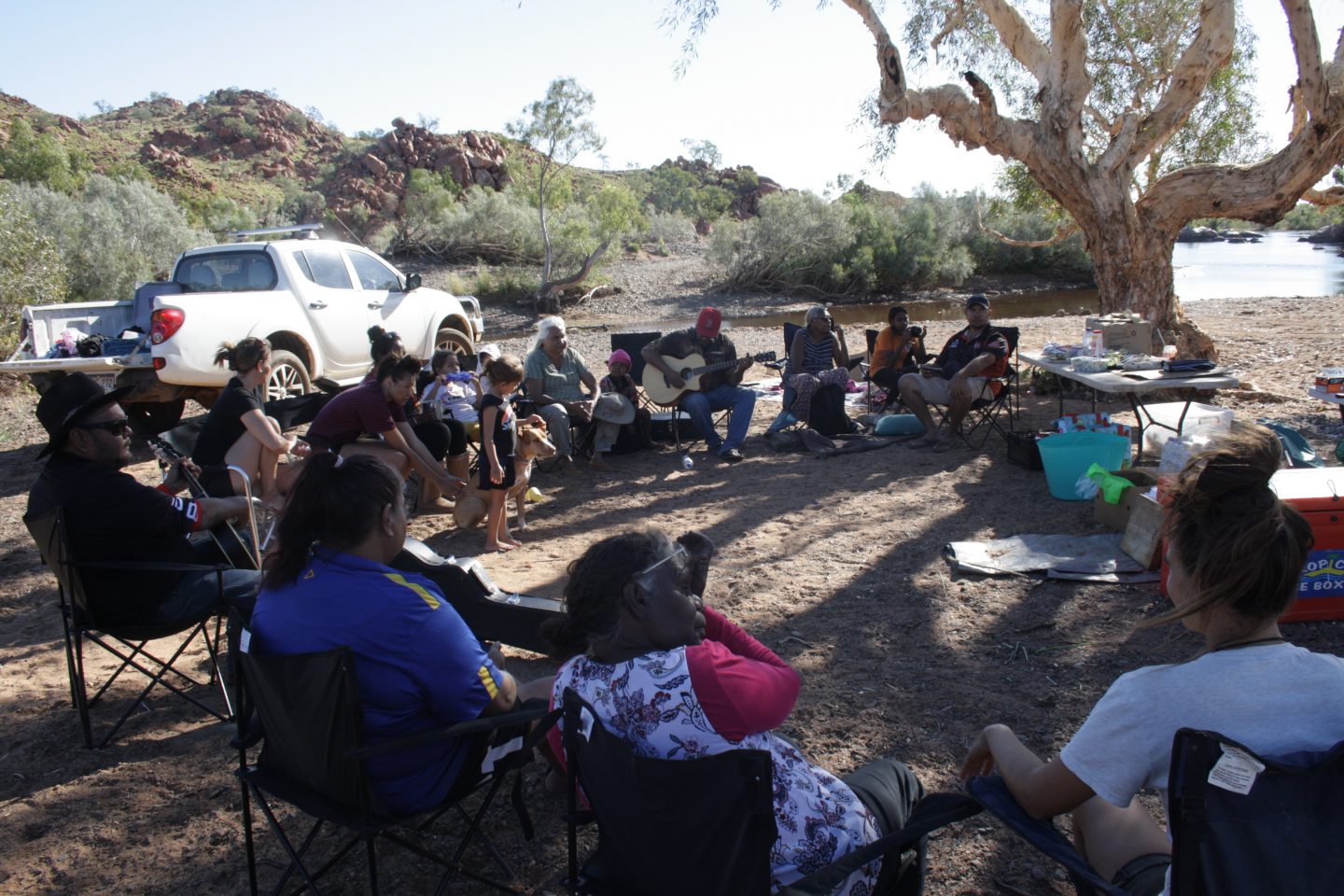 It has to be done where it’s part of a healing process. Healing takes time. Not only with young ones, but the middle aged people as well. You know those people that are just coming through, and maybe going through crisis. They need to say ‘yeah I want to write some songs because it’s helping me.’ That’s what I’d like to see. It’s got to be a very relaxed environment, no pressure. 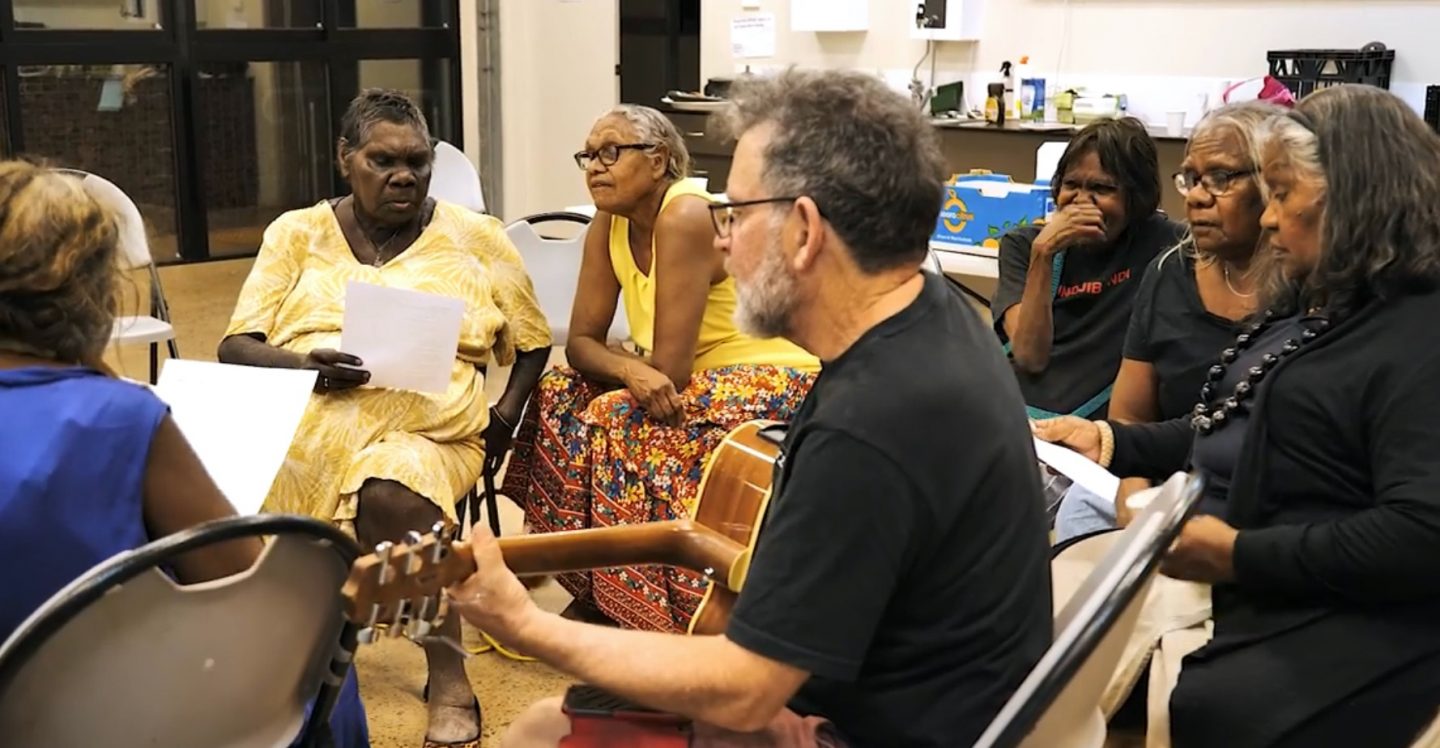 Our old people are always involved in this process because they see good things out of it, but we need more younger ones involved. This program should be ongoing – like a university – where you go there and you train, you listen, and you put down stuff. Then you pick your best material and you showcase it.

Songs for Peace could be in Karratha as well, we could do a show in Onslow and Tom Price too, do a roving show. We’ve got to show others what we’re about, and then others will know and will want to be a part of it.  We need to write our emotions down and be able to express it, we do that through music so well, we do it in Roebourne, our old people have been doing it for years. 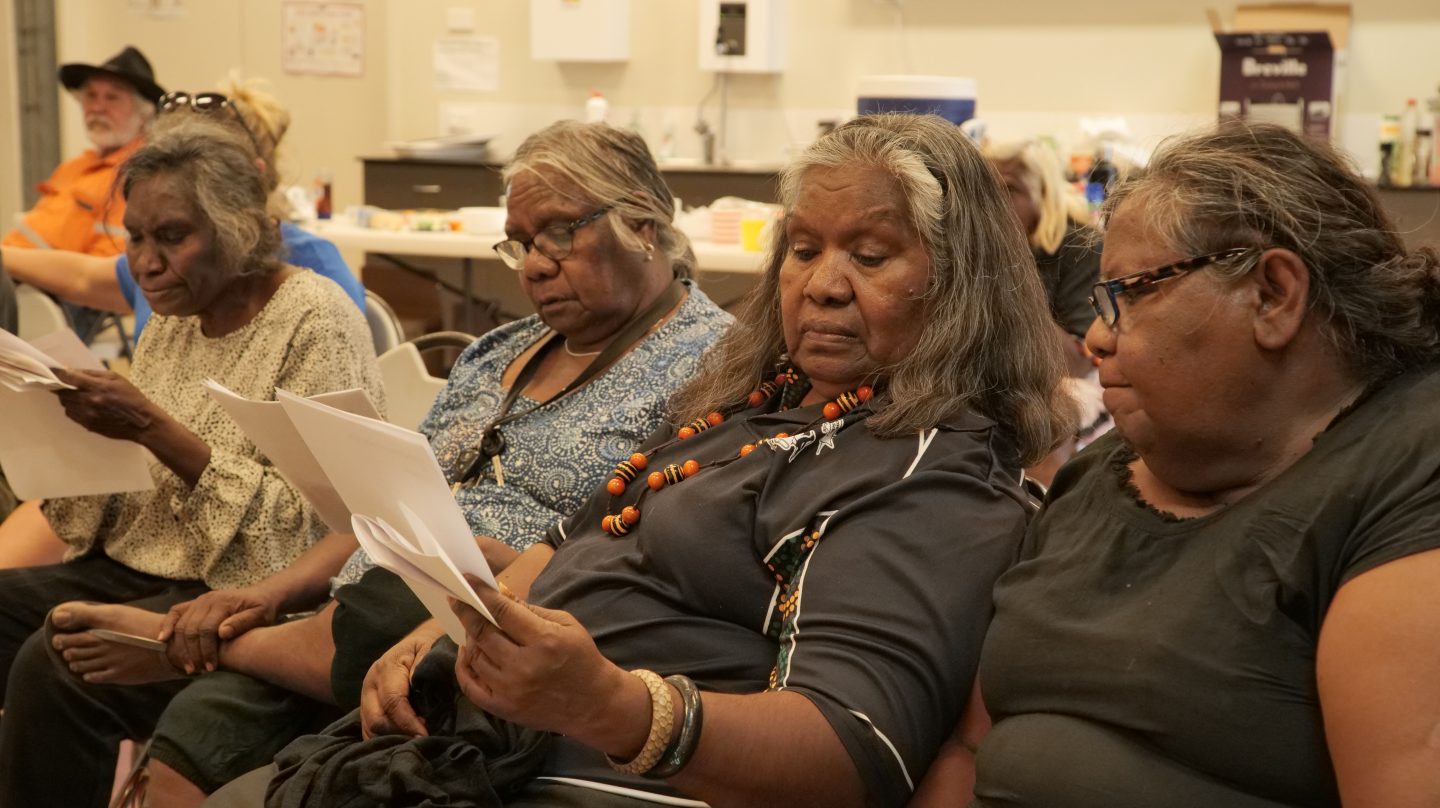 I would also like to see musical instruments being taught in the future. It doesn’t have to be a guitar, it can be any instrument. And you can blend all these instruments with our Indigenous instruments and we can use it for recording or for songwriting. We can create dances, we know how to do those things.

My best thing is when I see younger ones participating and enjoying what we’re doing. I’m really wrapped that we’ve had younger ones songwriting this year, younger than what we normally do, because that’s expressing yourself. 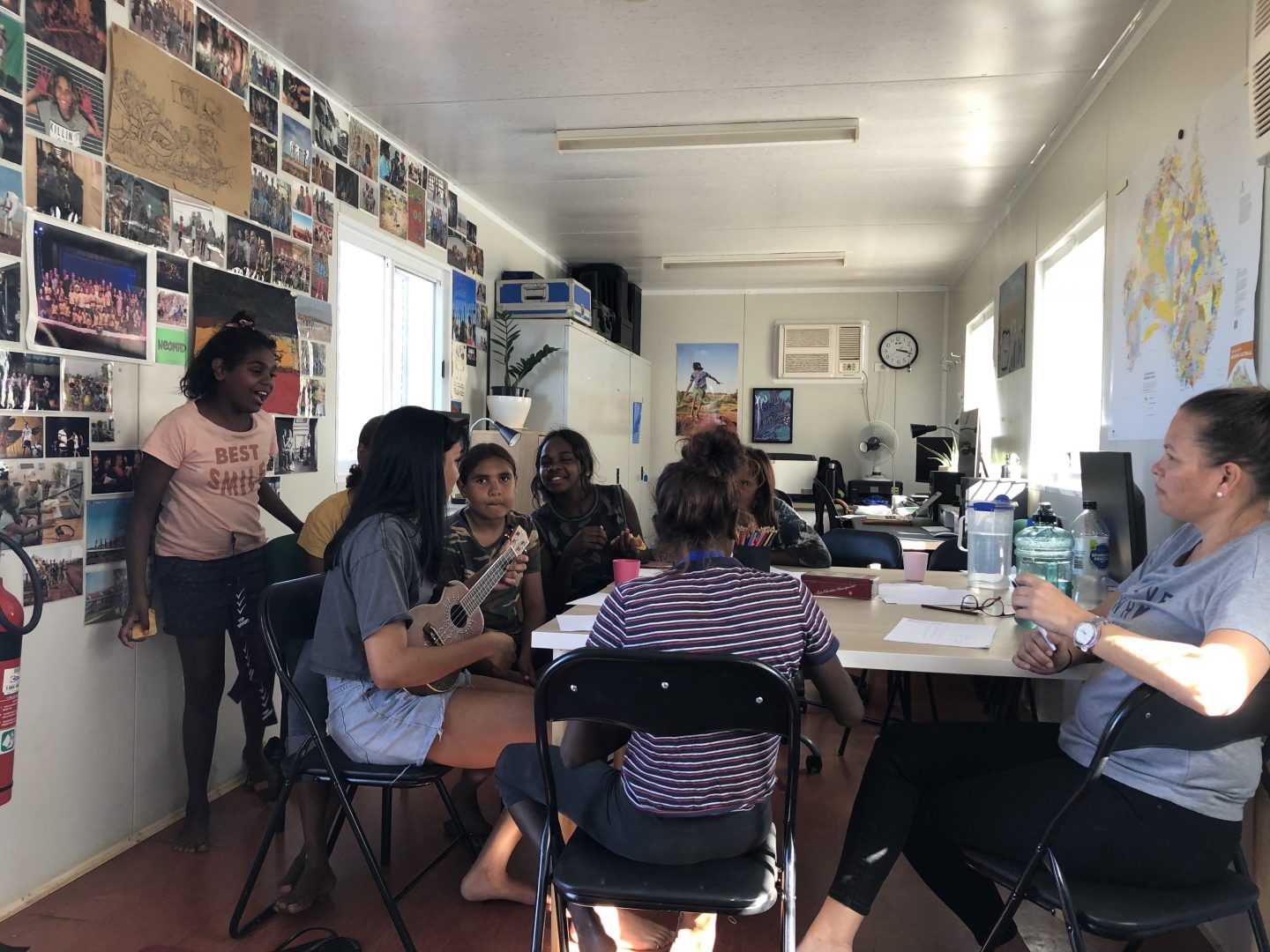 I like to try and enhance and grow the stuff that we got. To me the younger ones should know our history, good or bad, they need to know and learn from it. We need to keep our stories alive.

Songs for Peace is an initiative of Big hART’s New Roebourne project. To find out more visit the New Roebourne website : https://newroebourne.bighart.org