Diary of a Boatbuilder

This January Acoustic Life of Boatsheds sounds out Sydney's forgotten working harbour. Audiences will discover boatsheds transformed into aquatic sound shells and the lives and stories of boatsheds discovered through new music and animation. Today, meet Boatbuilder Rob Gordon who grew up on the foreshore and was born into a family of boatbuilders.

“I do it because I was born into it and I can’t really come up with a better way to spend my time. To imagine something deep in your imagination, plan that idea, build that idea, and then see that idea function. Boatbuilding completely satisfies that deep desire in me, and that was the same for my father.” -Rob Gordon

I got taken to sea before I could walk on one of Dad’s early fishing boats. One of my earliest memories is of my father’s deckhand waving a shark head in my face and thinking it was hilarious. 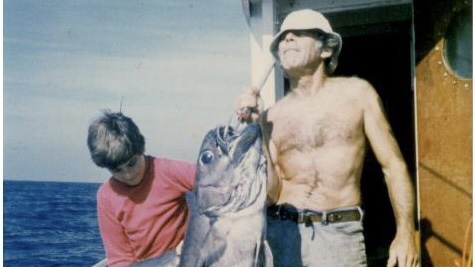 Rob fishing with his father Bob aboard Harbinger, 1975. Photo: Supplied

My father was first a plumber. One day he was at Dover Heights in the middle of winter up a ladder and he saw a yacht beating its way down the coast in a cold southerly, and he thought that was a much better place to be than up a ladder plumbing. That’s how he got started. 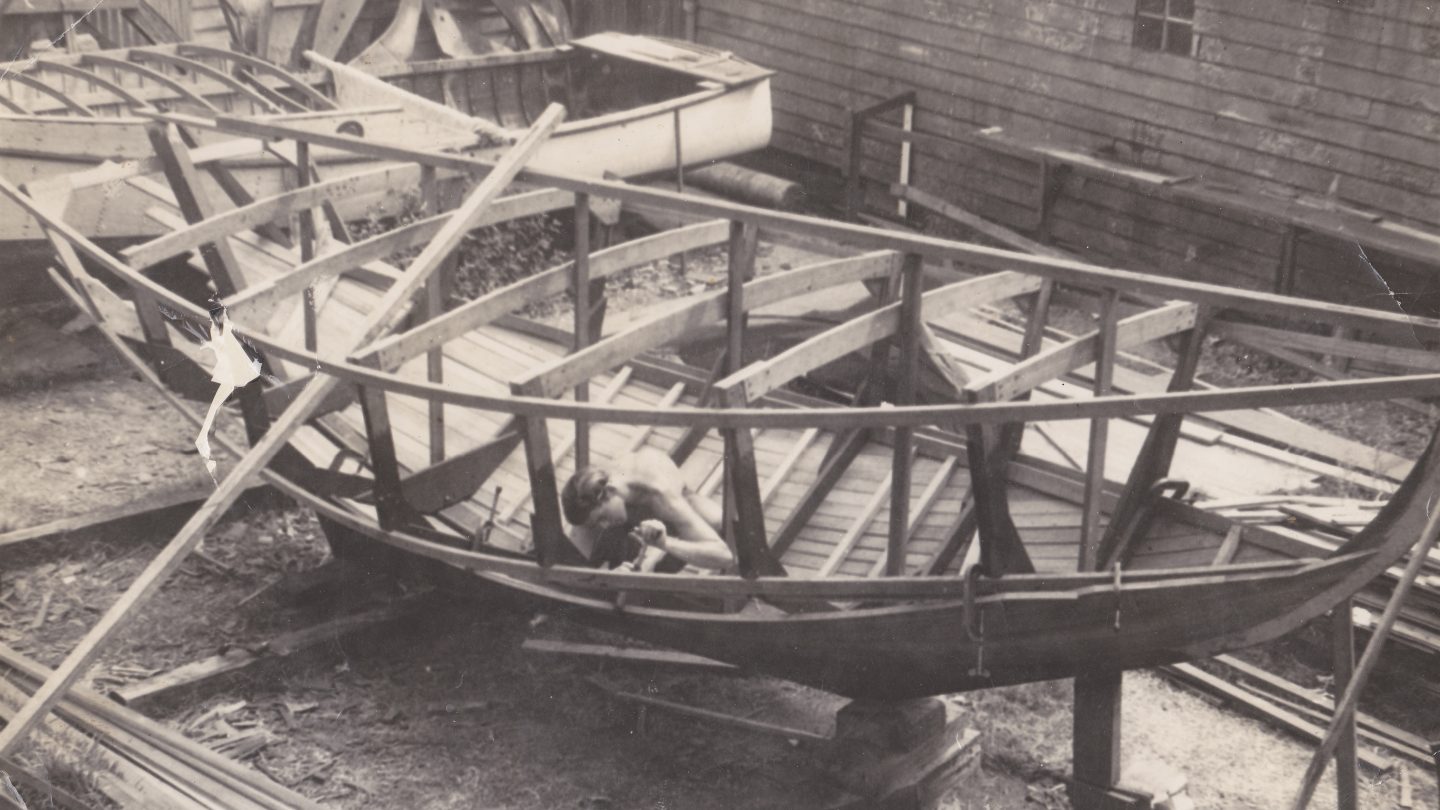 At the age of 16 he built his first boat. His whole premise for getting into boat building was escapism. He wanted to escape a very hard upbringing through the Great Depression and a pretty terrible family life. He spent his life building boats – he built ones he wanted to build. He never had a large company. He occasionally built fishing boats and did commercial fishing and that’s how he got through life, living under the radar, doing what he wanted to do every day. 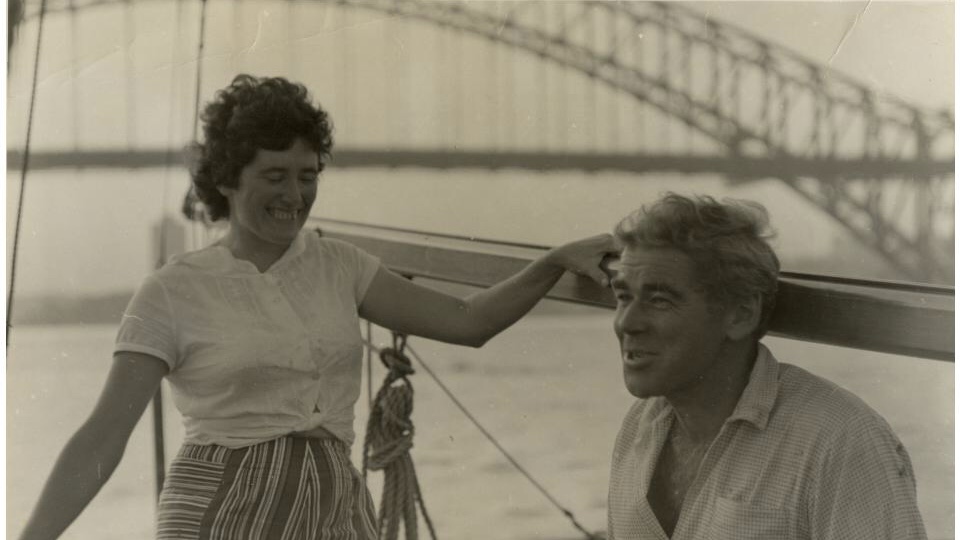 Bob and his wife Joan, sailing aboard Widgeon, 1964. Photo: Supplied

He started off in the late 1930s in Rushcutters Bay, where the Cruising Yacht Club now is. He married my mum in 1950 and they lived in an idyllic location, in a shack on the foreshore of Berry’s Bay. It was a very castaway type life. 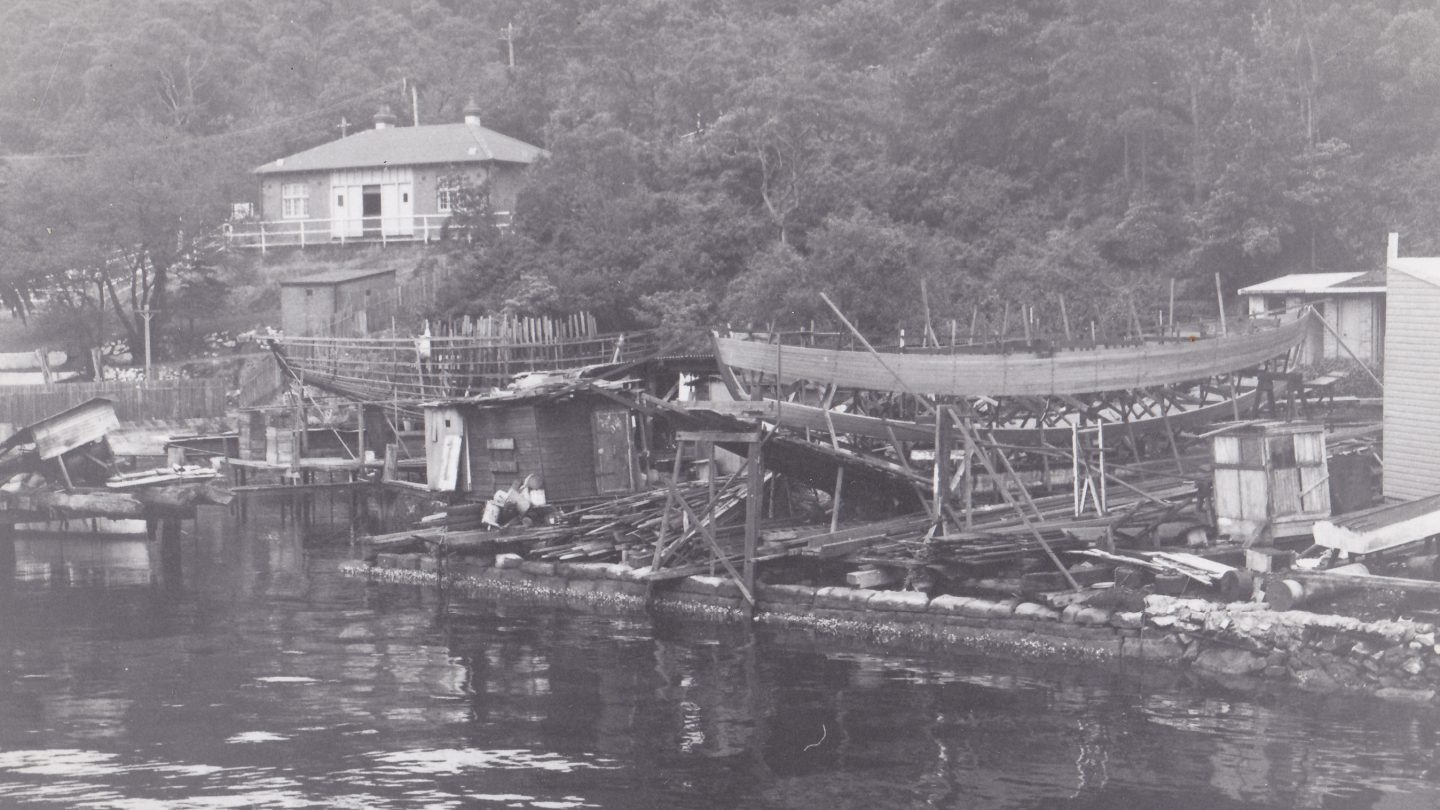 Bob and Joan lived in a humpy (middle) next to Woodley’s on Berry’s Bay. Quarantine Station at left. Photo 1963, Supplied.

Then in 1970 that was all closed down, his boatshed got turned into a car park and he picked up a sublease from Neptune, a big marine engineering company in Lavender Bay. After a year or two of paying rent, he started paying his rent in fish, from fishing boats. That’s how they went for the next 20 odd years. They liked him being there, he took good care of the place and shovelled sand out of the slipway, so they just let him stay rent free. When the developers moved in and built some home units, his subleased land reverted to public park and that’s when he retreated to this archway that I’m currently in. This archway was always our storage shed from the 1970s. 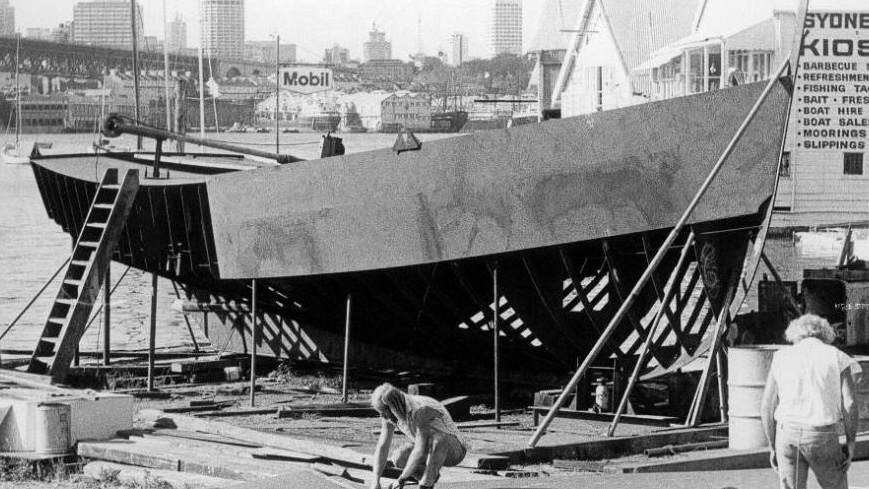 When I was a kid,  over at Berry’s Bay there was a guy in a caravan on the barge living there. There was another guy on the western side, living in a shack on the public beach. There were all sorts of characters around the waterfront.

Many people of my vintage will tell you how interesting the waterfront used to be and how boring it is these days. There were places of interest – there were boats being built, waterfront industrial stuff, all sorts of higgledy-piggledy one-man-shows about the place – and all of that’s just about gone. 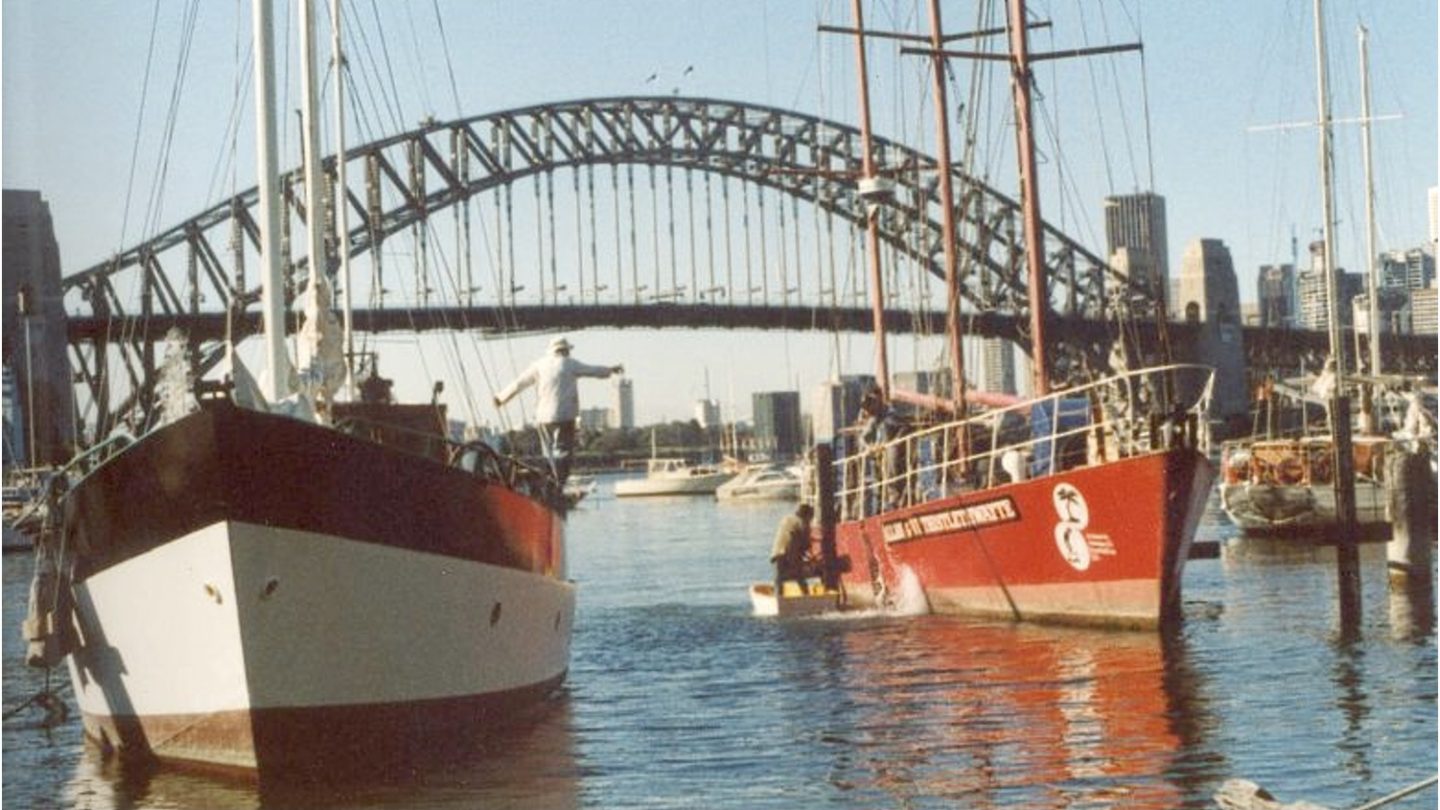 The working harbour in the 80s, with two of the boats Bob Gordon built moored at Lavender Bay, 1984. Photo: Supplied

There’s been this sanitation of things and the harbour is a much cleaner place – full credit to all of that – but it’s become a bit bland. In the good old days there was always something changing, something going on in the waterfront, and these days it’s a very static place.

All my life I was working, being a kid onboard fishing boats and working around the boat yard doing whatever I could on the weekend, scrab jobs. Whether I wanted to be there or not was another question. 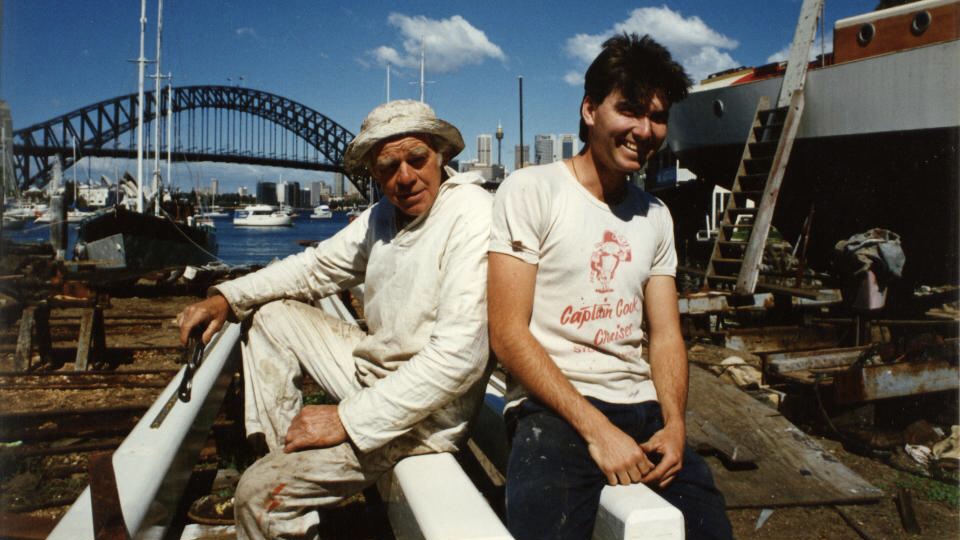 Rob and his father at Lavender Bay, 1987. Photo: Supplied.

When I was 18 Dad needed help with another boat so I quit my office job and came down to work with him – that’s where our proper boatbuilding relationship started, where I became more of a student and full time employee.

In about 1998 he wanted to start building smaller wooden boats in this archway where we are. We built two boats from scratch down here before he died in the early 2000’s. It was in that time where I really learnt about timber boat building. 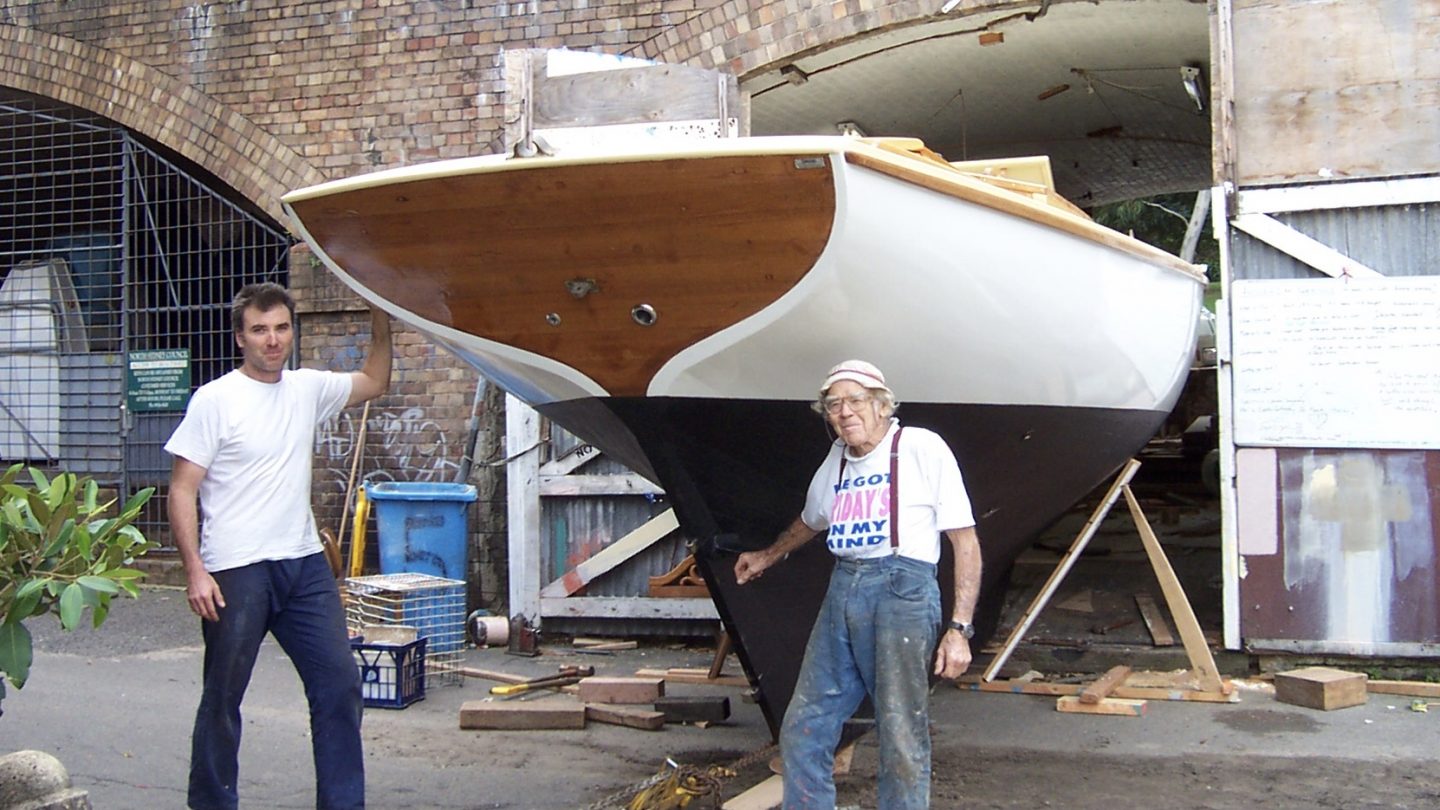 Rob with his father pulling 28′ IVY out of the Lavender Bay boatshed, 2005. Photo: Supplied

The work I do is so niche. For every 10,000 boats being built there’s probably one wooden one being built. There’s only two other guys in Sydney I know who are currently building a very traditional wooden boat like this, and that’s pretty rare.

The timbers we use are select boatbuilding timbers. One of the old classic Manly ferries got scrapped half a century ago and the old man grabbed a lot of the timber from the deck. It’s the most beautiful, greasy, Burmese teak you’ll ever find, we always find somewhere to use a bit of it, it’s such a marvellous timber. 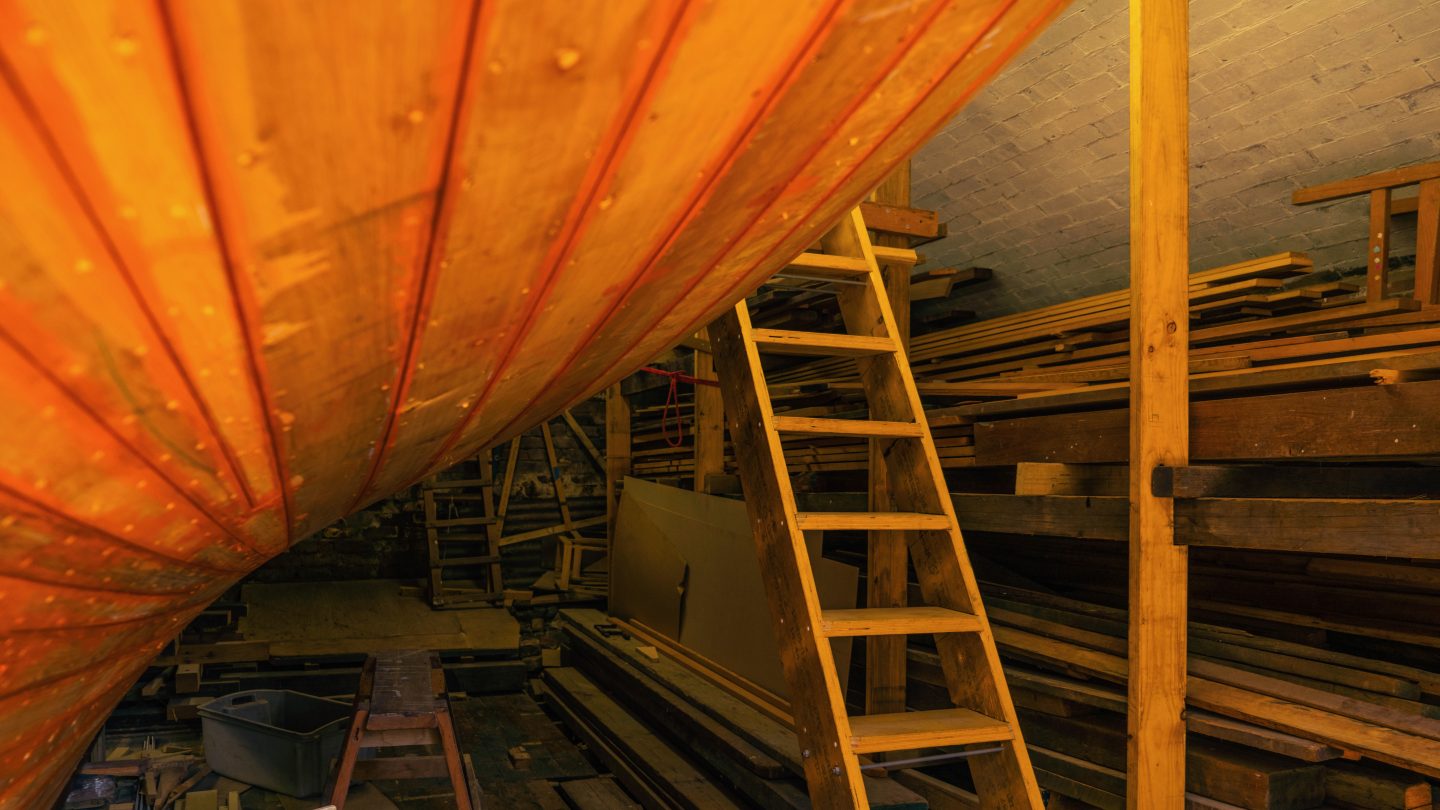 I’m currently building a couta boat which has a deck and a cabin which will be used for picnic sail charter work on Sydney Harbour. It uses New Zealand kauri for the planking which was recycled out of a beer vat from one of the commercial breweries. There’s also spotted gum which was selected and cut down on the south coast for me by a bloke with a bush mill, south of Ulladulla. 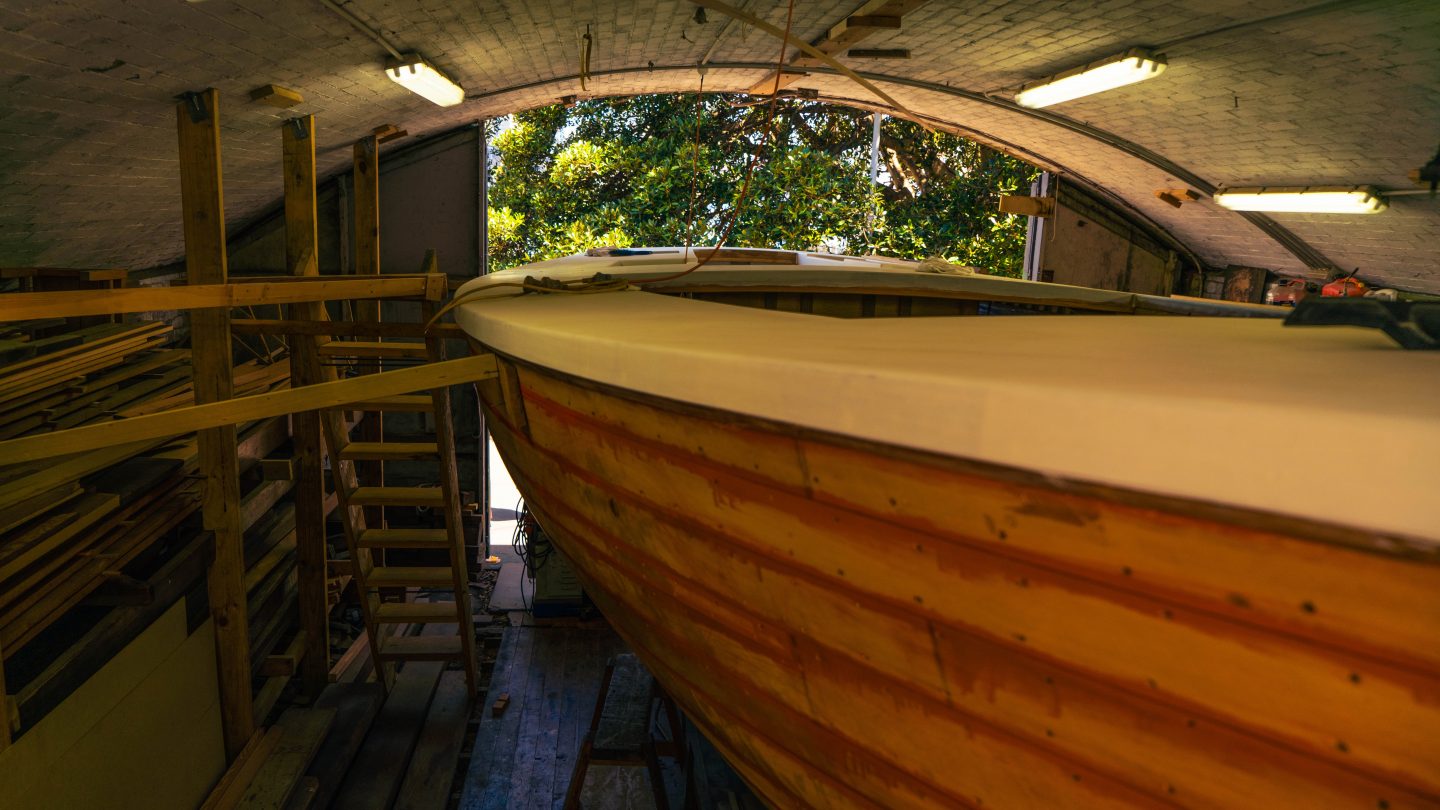 Appreciating the craftsmanship and heritage of boatbuilding makes a good boatbuilder according to Rob Gordon. Photo: Jordan East, 2022.

I do it because I was born into it and I can’t really come up with a better way to spend my time. To imagine something deep in your imagination, plan that idea, build that idea, and then see that idea function. Boatbuilding completely satisfies that deep desire in me, and that was the same for my father. 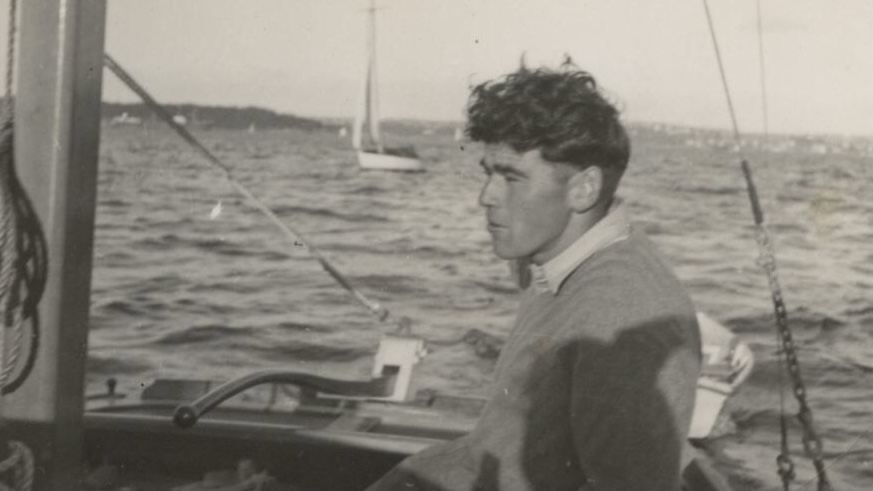 Bob out on Sydney Harbour for a day sail, circa 1946. Photo: Supplied.

Then one day she’s in the water, and I tell you what, when you step aboard a boat that you built, when you step aboard her for the first time when it’s floating, you swear there’s life in it. It’s unbelievable. There’s movement and things are rocking around, you can hear the water slapping on the sides, it’s an amazing feeling. 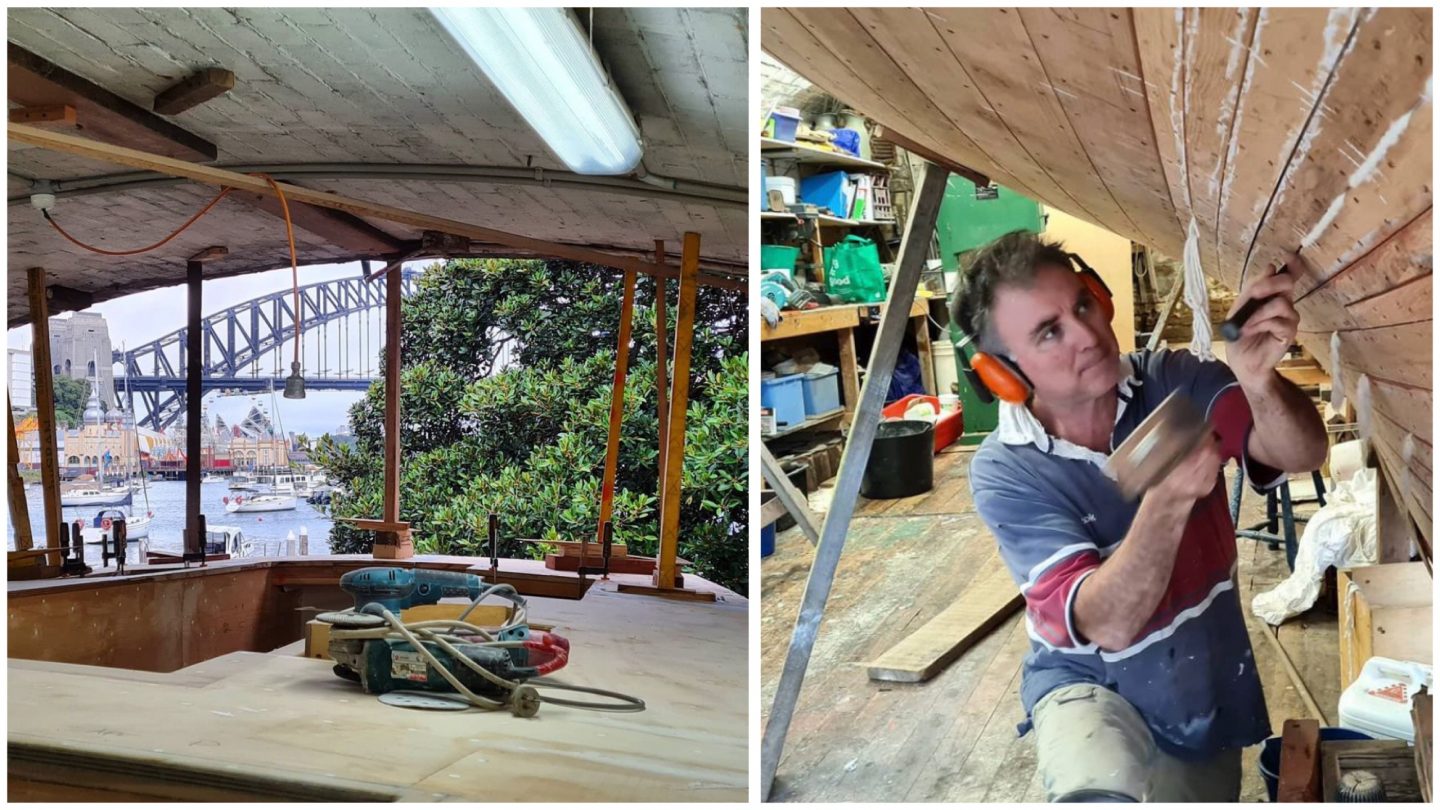 Acoustic Life of Boatsheds just sounded like good fun. Nobody in 50 years has asked me to do this, and it’s not going to happen again, so why not? Why not have the experience. If life isn’t all about experiences what is it all about. What I’m looking forward to the most is stepping back and seeing my workshop transformed into something else, seeing things in another way. 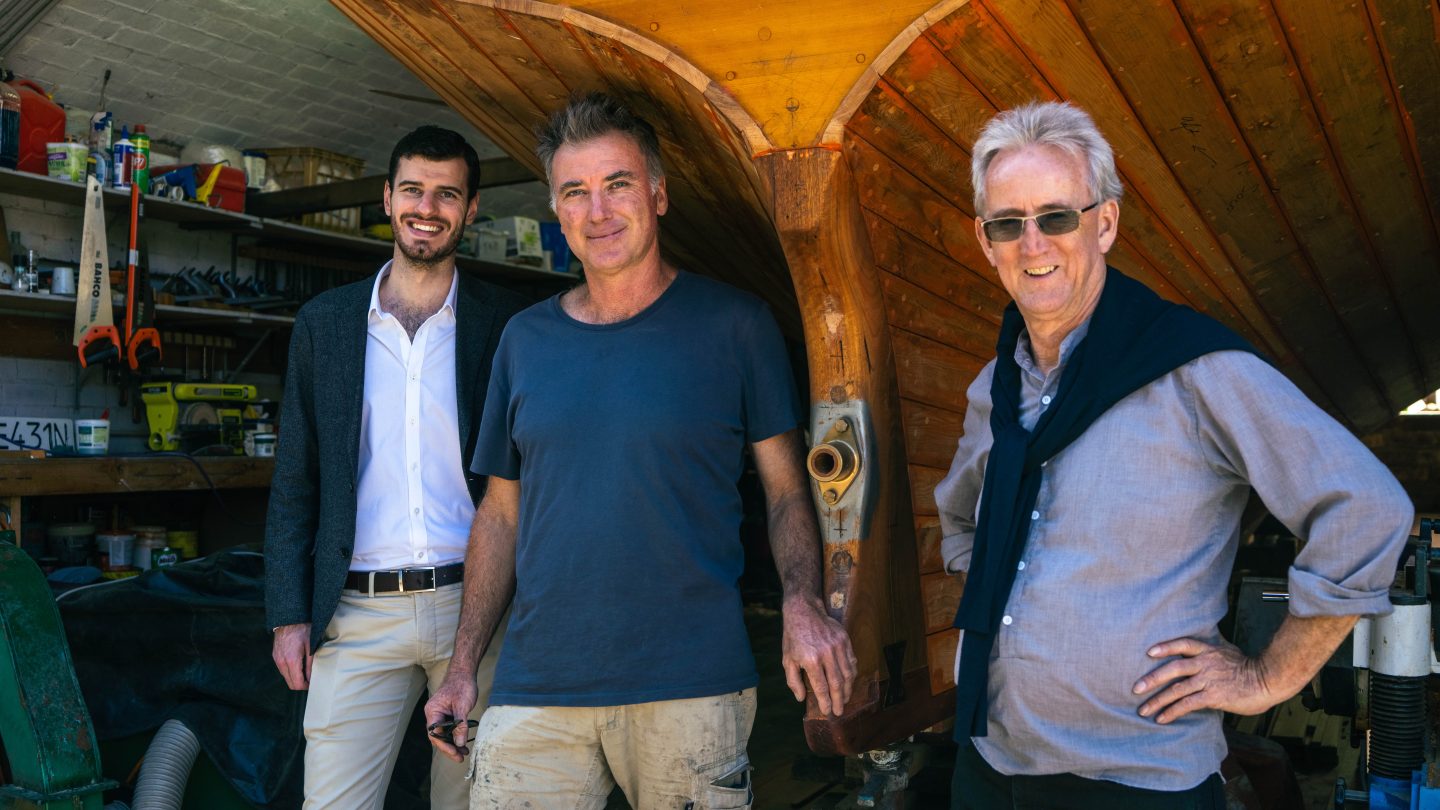