Eels, Mud and the Acoustic Life of Boatsheds

This Summer audiences experienced the Tamar and North Esk Rivers in Launceston in a whole new light through the untold stories of boatsheds, as part of Mona Foma. Acoustic Life of Boatsheds transformed boatsheds, a ferry, a rotunda and a bridge into otherworldly performance worlds inspired by eels, mud and the changing face of the river. Today we speak to four of the artists who featured at the premiere sell-out season.

Instruments made out of eel skin, artists covered in mud and boatbuilders jamming to music. Welcome to Acoustic Life of Boatsheds.

“We got in this real zone covered in the mud of the river, smelling the river in the dark, paying this tribute to the river, by the end of it we felt like mud spirits”, says artist Maggie Abraham. 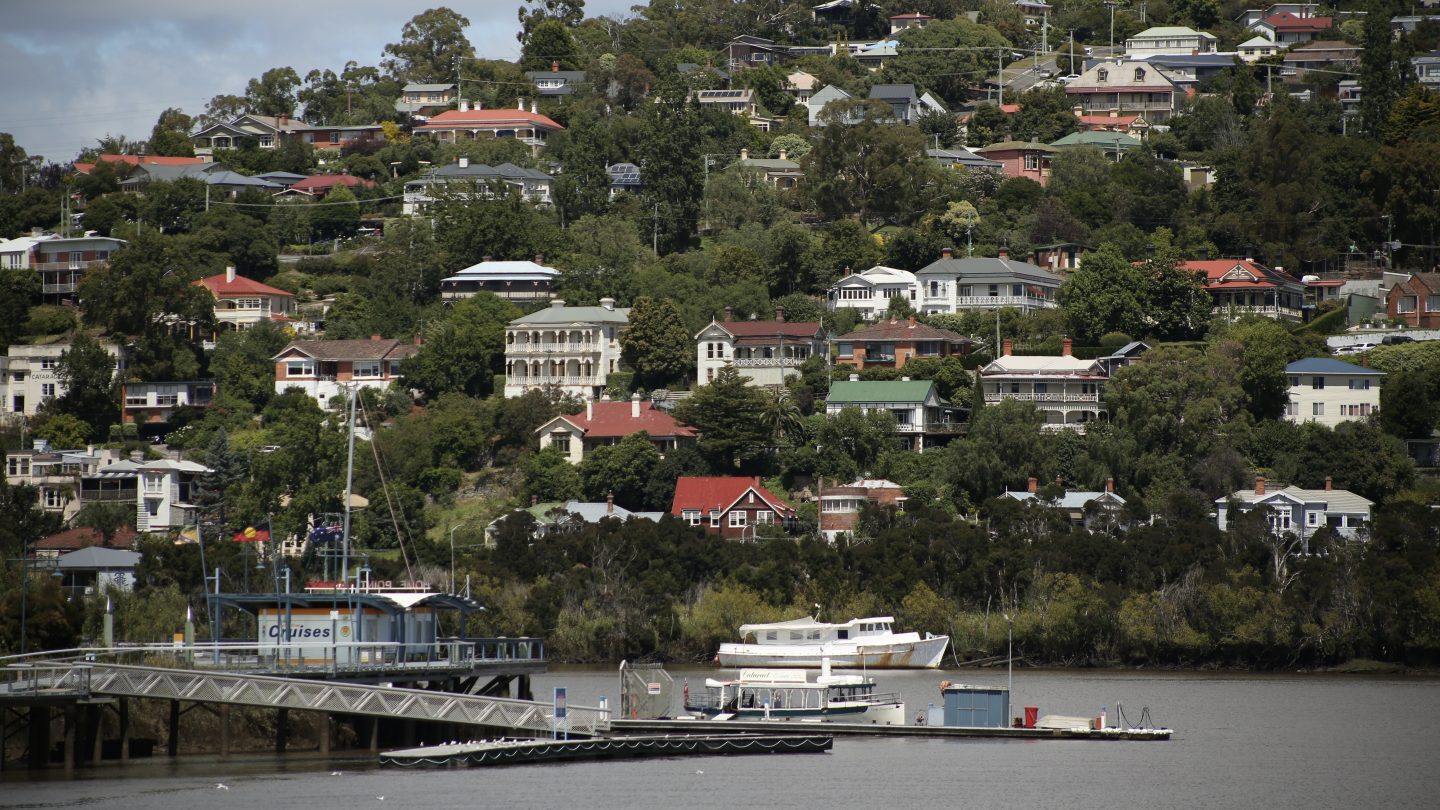 “We’re not instrument builders, we’re not leather workers, we’re barely even poets. But, we know how to perform and put a show together” says Launceston Artist Yyan Ng.

When acclaimed Tasmanian artists Yyan and Emily decided to create a world first at Acoustic Life of Boatsheds – to make the first known instruments crafted from eel skin – they found themselves on an unexpected journey of many twists and turns.

To make an instrument out of eel skin they first had to find eels, then kill them, skin them, dry them and then craft an instrument. Luckily artist Yyan Ng is also a chef and harnessed his foodie knowledge to open up connections. 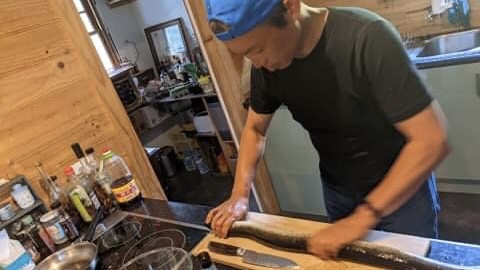 Sushi Chef Maasaki was called in to help prepare the eel for skinning. Photo: Supplied

The adventure took them to an eel exporter in Baghdad (Tasmania), a Japanese master sushi chef, a leather worker and finally to a luthier who’d never worked with eel skins before.

“Monday we were sewing skins, Thursday Night we started writing the music, Friday night we finished the music, Saturday night we performed. This is pretty much closest to the edge I’ve ever done”, said Yyan. “We learned a lot, because a lot of these skills are lost with modern technology.” 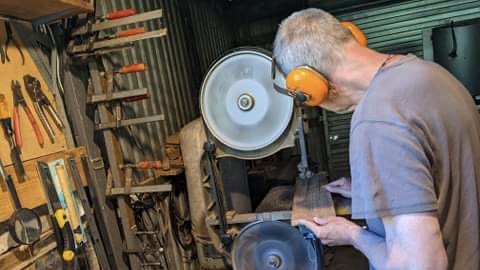 It’s not the first time Hobart artist and environmental scientist Emily Sheppard has experimented with creating instruments out of organic materials. Emily’s passion for unconventional instruments and opportunities recently came to the fore for another Big hART project where she made an amplifier out of kelp.

“We couldn’t start writing the music till we had the instrument, but the instrument might not have worked, we didn’t know how it would sound” says Emily.

Yyan explains how they wanted to build the simplest bowed instrument they could within their deadline, “The simplest thing we discovered would be a Chinese violin which is an erhu”. 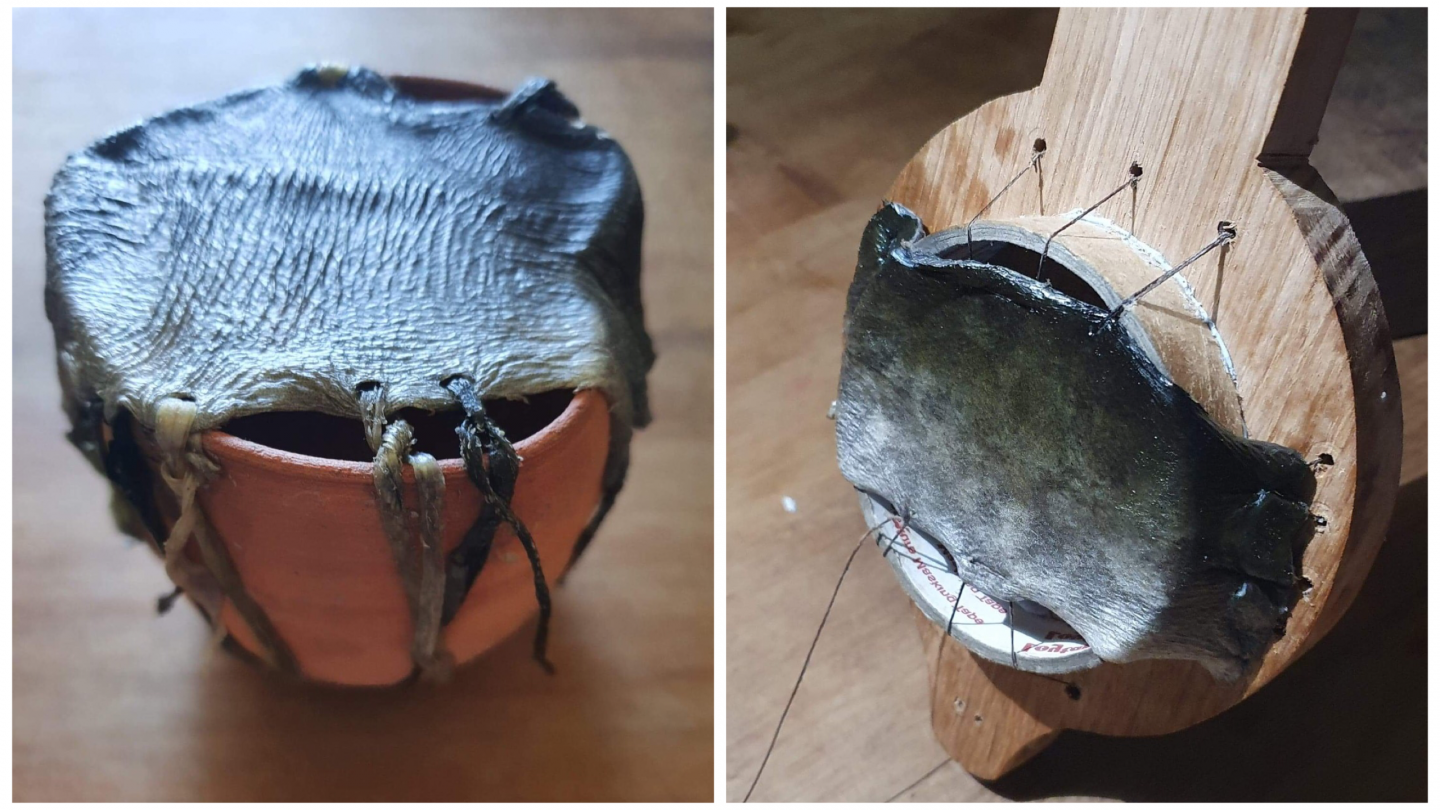 An erhu is traditionally made out of python skin, but eels were different to work with. The pair discovered once they’d worked out how to kill the eels (with salty water), the skin became extremely slimy and hard to work with. Emily experimented first with creating a kelp drum, then a ceramic drum, and finally an erhu. All instruments were used in the final performance aboard the Lady Launceston.

“The eel skin membrane was raised up, with some strings and a bridge”, says Emily. “For the gigs we put a contact mic on it to mic it up. It’s a quiet sound, but beautiful.” 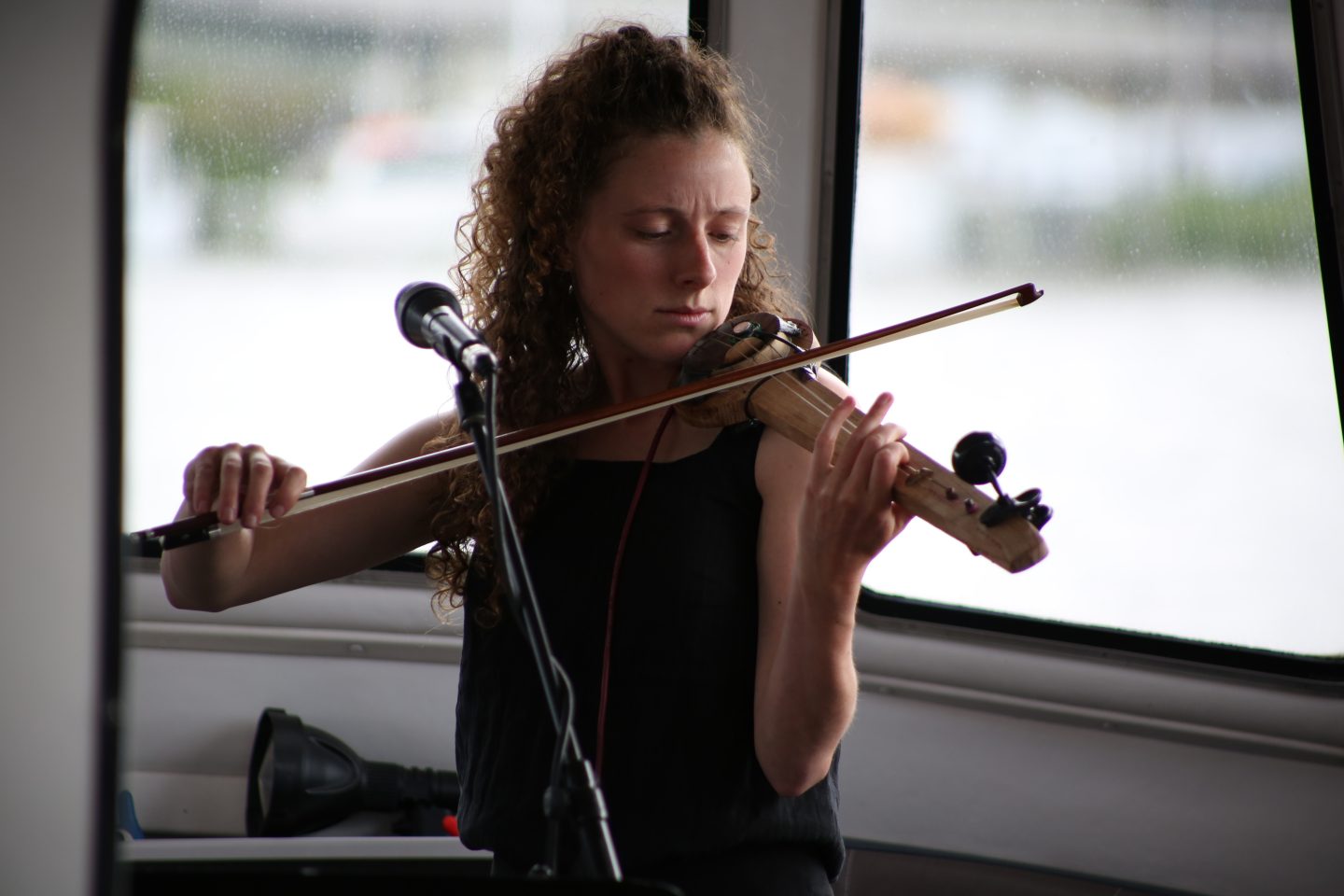 The pair researched eel ecology extensively. They discovered how Tasmanian eels spawn in the Coral Sea, ride the currents down to Tasmania as glass eels, then follow fresh water into estuaries, lakes, rivers and dams becoming black juvenile ‘elvers’, then migrate back to marine waters to spawn again. They also met with members of the Palawa community to understand Aboriginal people’s relationship to the eel.

“We were using the eel migration story from birth to death, spawning and rebirth”, says Yyan. 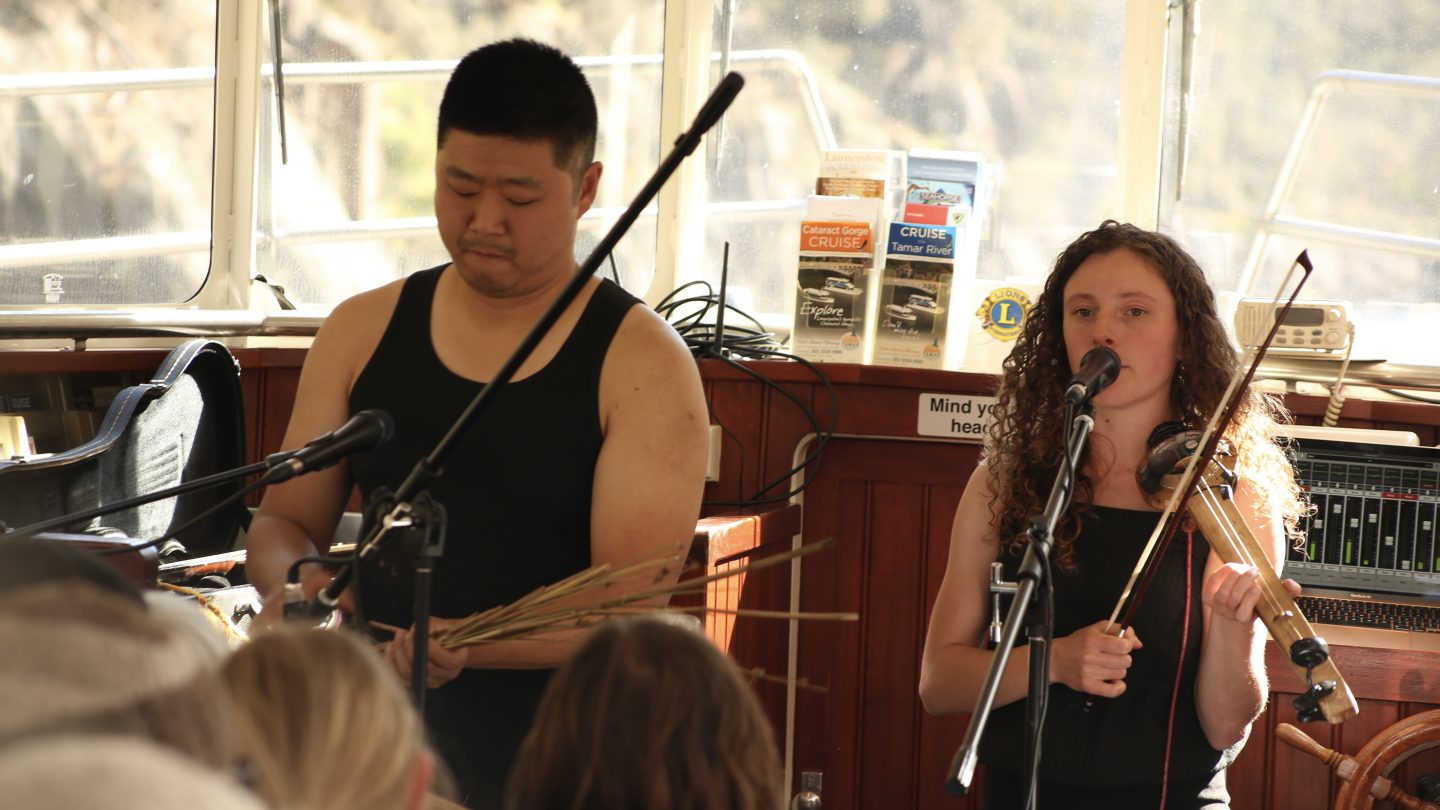 Emily and Yyan created a stunning mesmerising work which reflected the coral reefs, the journey down the currents, the ecology of the kelp forests of Tasmania, the Indigenous history of Tasmania and the coming of industry to Launceston. They timed their music with the Lady Launceston’s journey upstream into the gorge, the ferry horns, bells and engine noises all becoming part of the composition. This extraordinary work also included Yyan making percussion out of kelp, mud and eel traps. 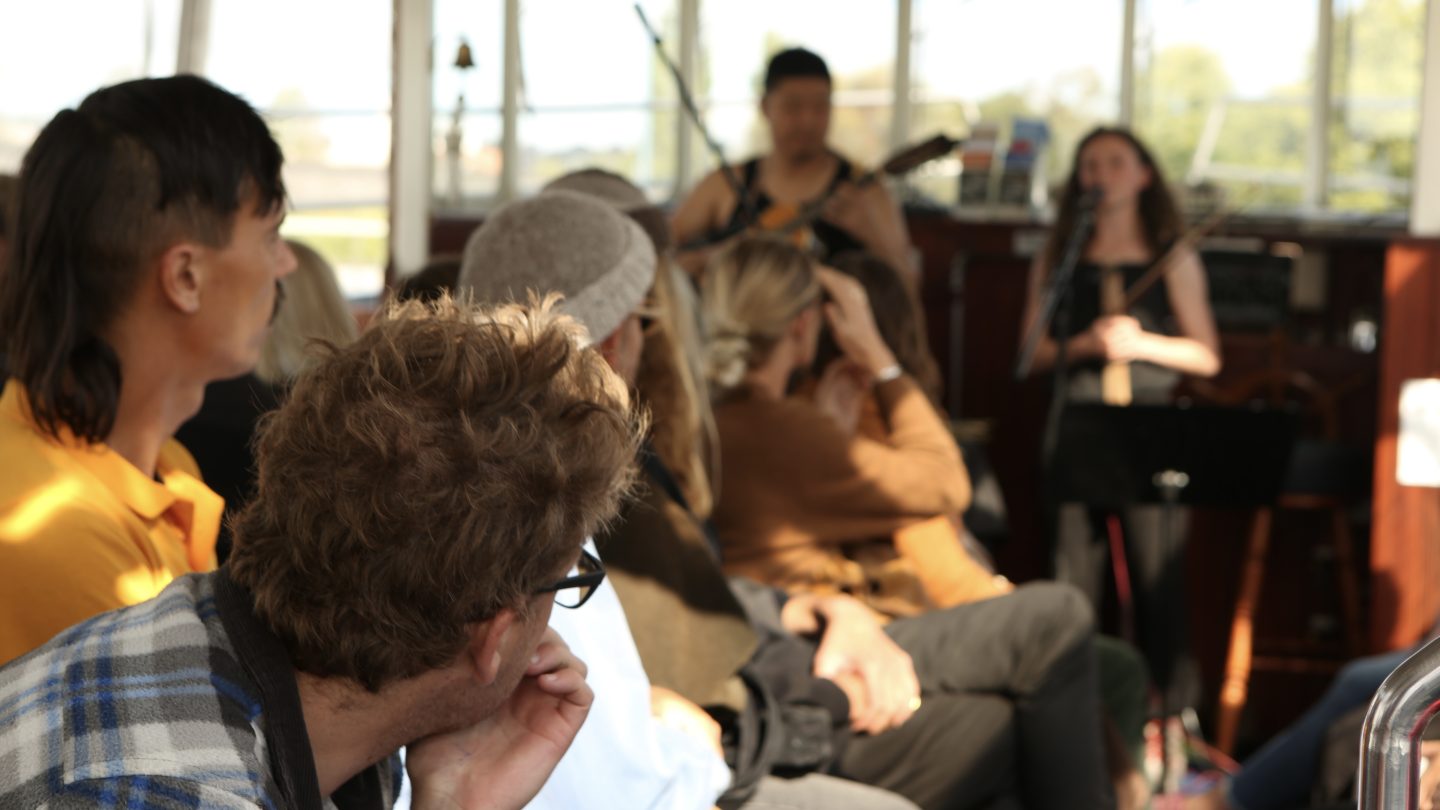 “Since we’ve done this show a lot of people have come forth with a lot of science background and also sent us a lot of poetic things”, says Yyan, “It’s a way for people to think about the river and all the issues that are existing with kelp, eels and mud which is all tied to the ecology of the river.” 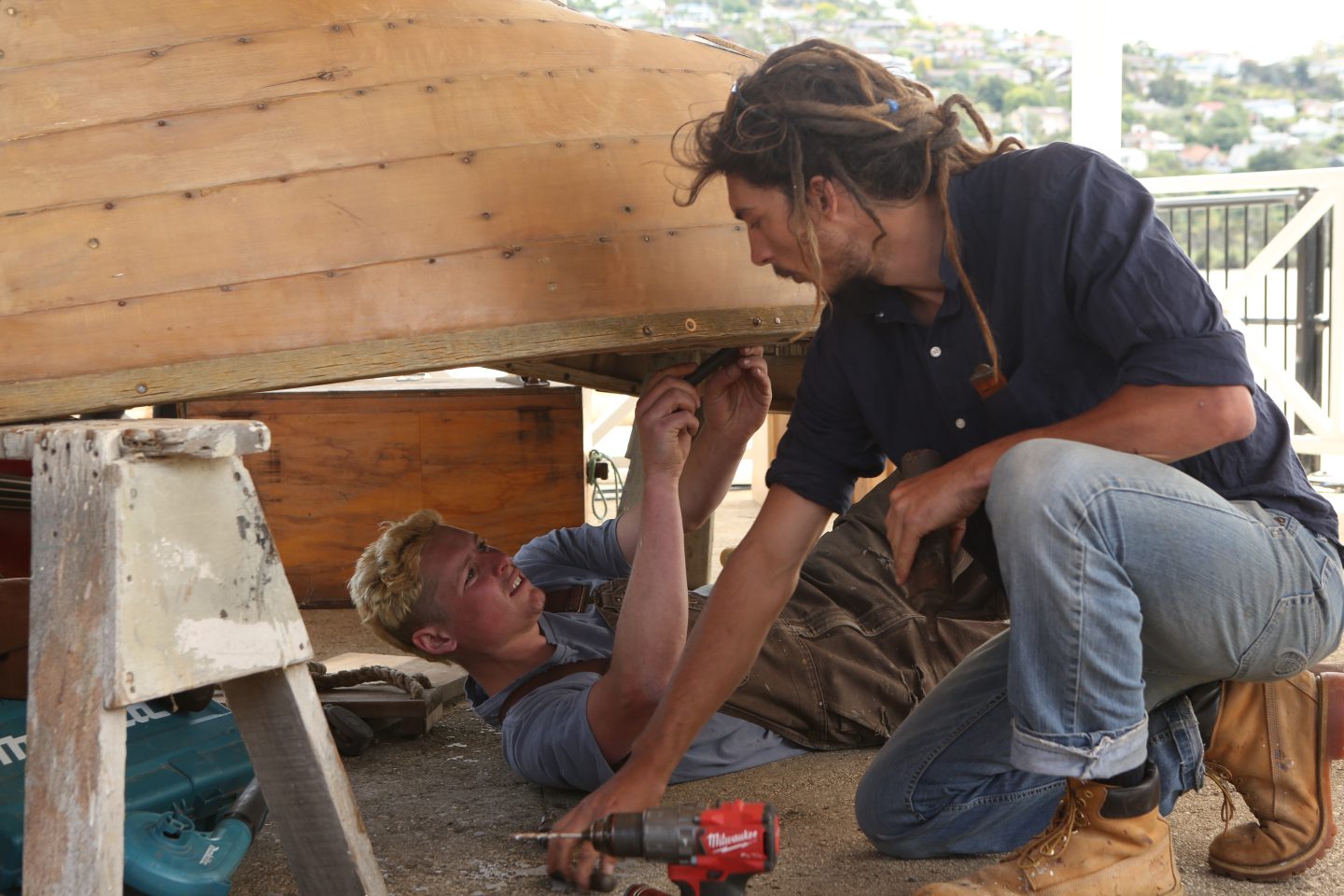 Over at a rotunda by the river two boatbuilders hammered, shaping a keel and caulking a timber dinghy in time with the rhythm of sea shanties, guitar, accordian and upright bass performed by Zac Henderson and Band.

Boatbuilders Locky Rankin and Tom Giveny of Denman Marine in Kettering Tasmania have worked on many unusual projects, including the current restoration of historic vessel Te Rapunga, but had never done anything like this. 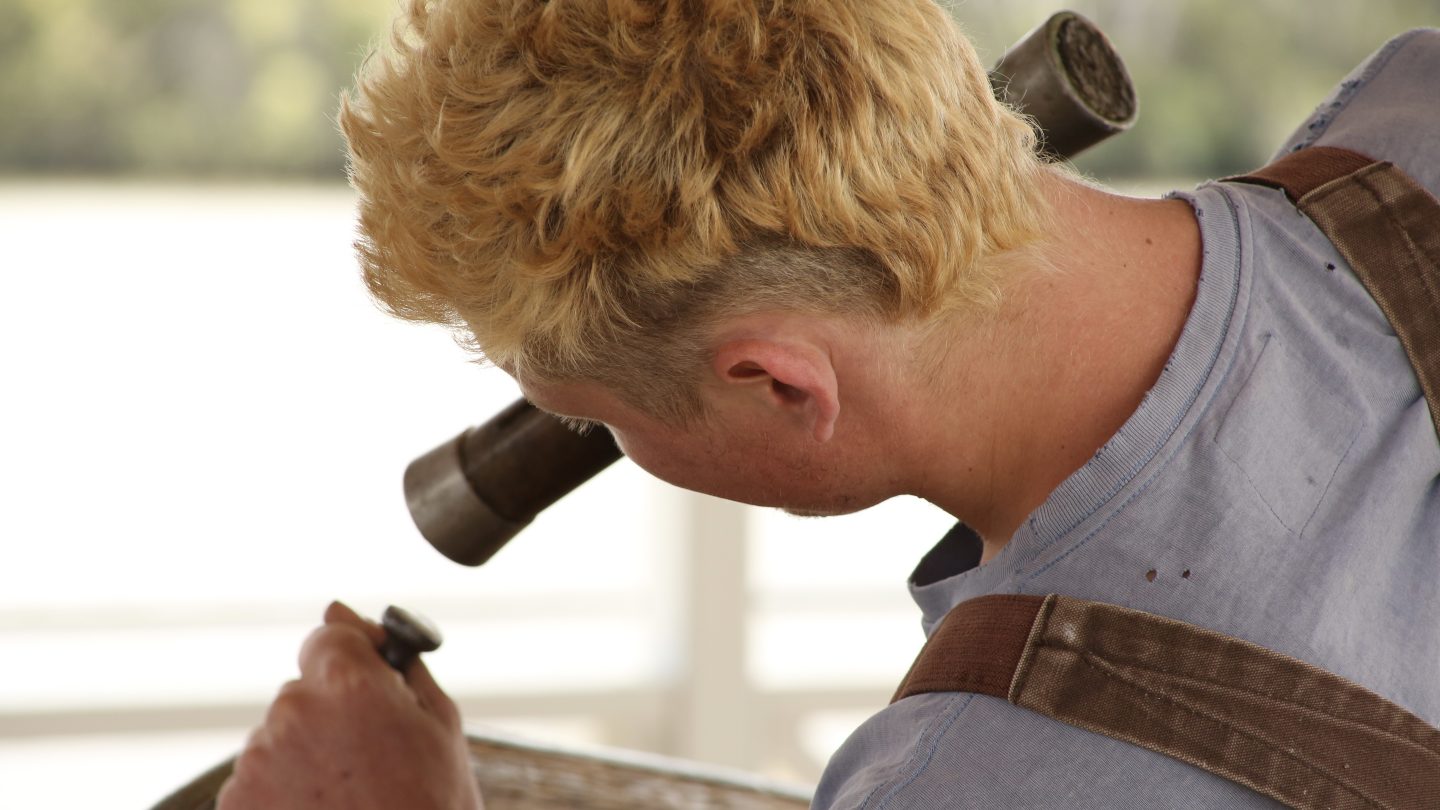 “I was trained in a traditional method, doing a lot of restoration” says Locky Rankin. “Traditional timber construction of boats still burns brightly in Tassie, we’re lucky we’ve got the history and the timber to do it.”

“I haven’t done anything like this before. It was interesting getting to know the musicians and seeing what they found interesting in what we were doing”.

The musicians were interested in the melodies and rhythms of boatbuilding. Caulking, making the seams of your boat’s hull or deck watertight, has a natural rhythm to it, says Locky 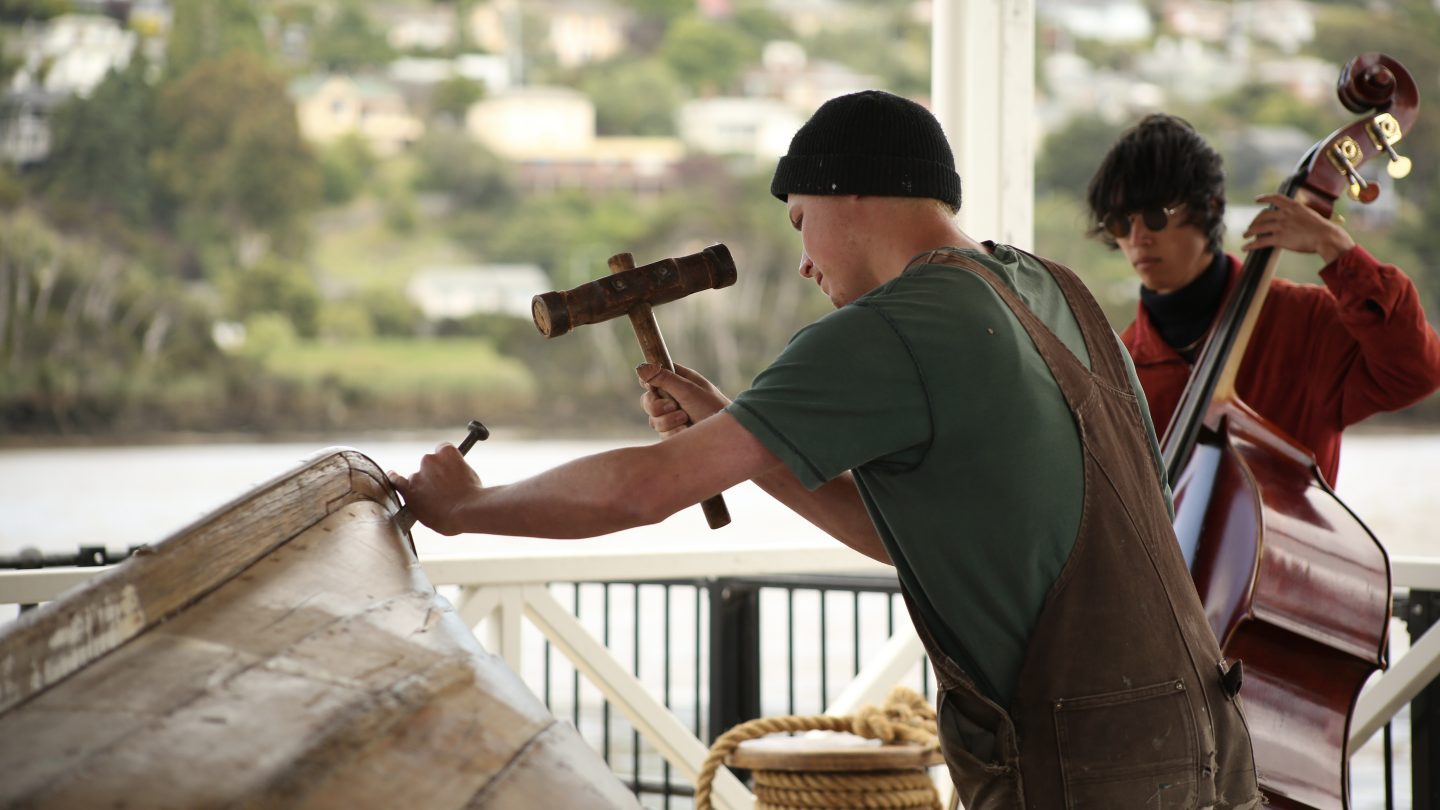 “You’re almost caulking in time, because that’s how you do a better job, so it went hand-in-hand with playing underneath the musicians”, says Locky

“We started doing some sea shanties, so there was a lot of singing along from the people watching.  Dom Nguyen was playing the double bass, following the noise from the caulking, playing these improvised beats”. 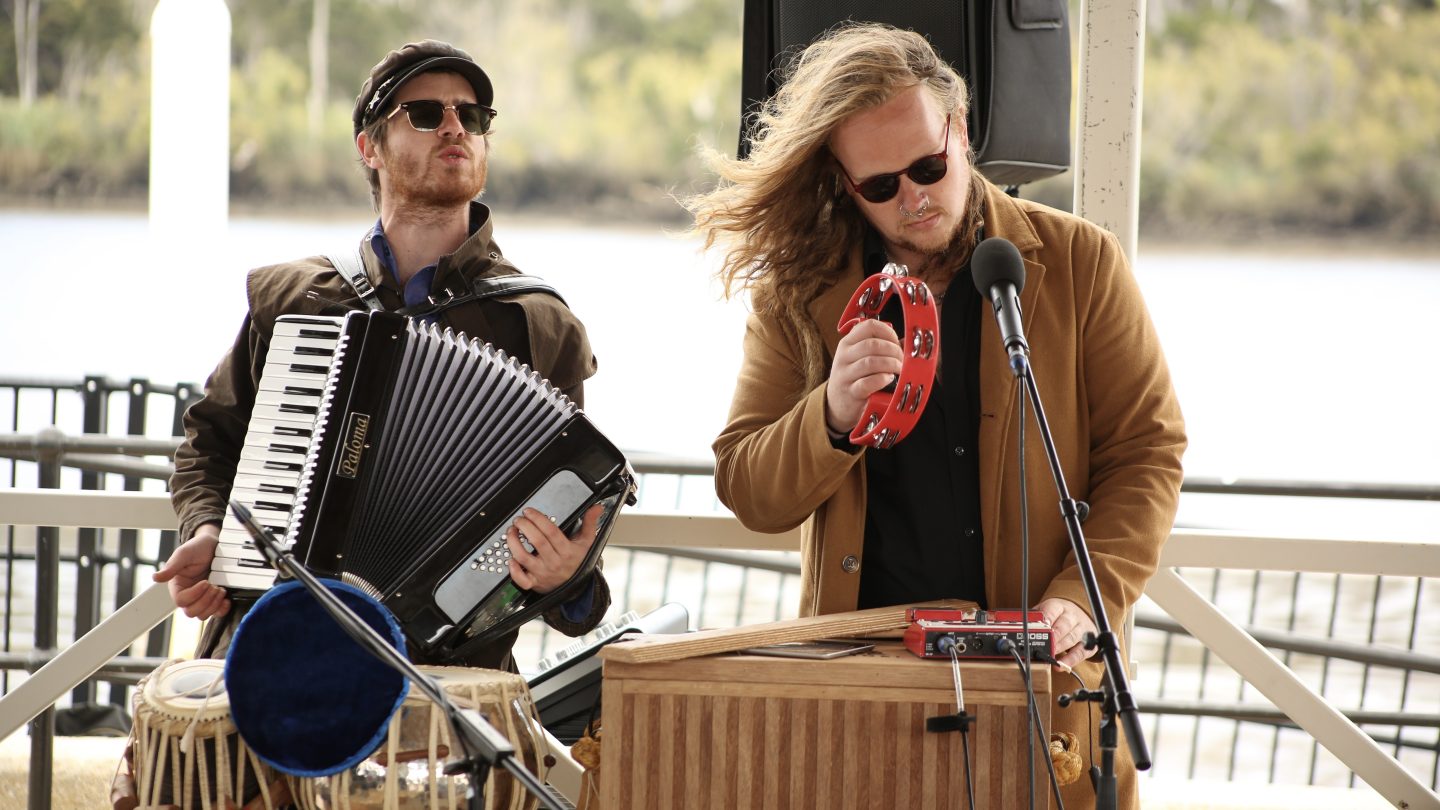 “On the second day we started putting microphones under the boat and Sam Dowson was sampling and looping some of the noises Tom was making when he was shaping his keel”.

At the end of every show audience members came up to speak to Locky and Tom, completely intrigued with the tradition of boatbuilding.

“I’d definitely do it again”, says Locky. “There’s loads of different things that you can do with hand tools. I think the ‘Acoustic Sounds of Boatbuilding’ could be really cool”. 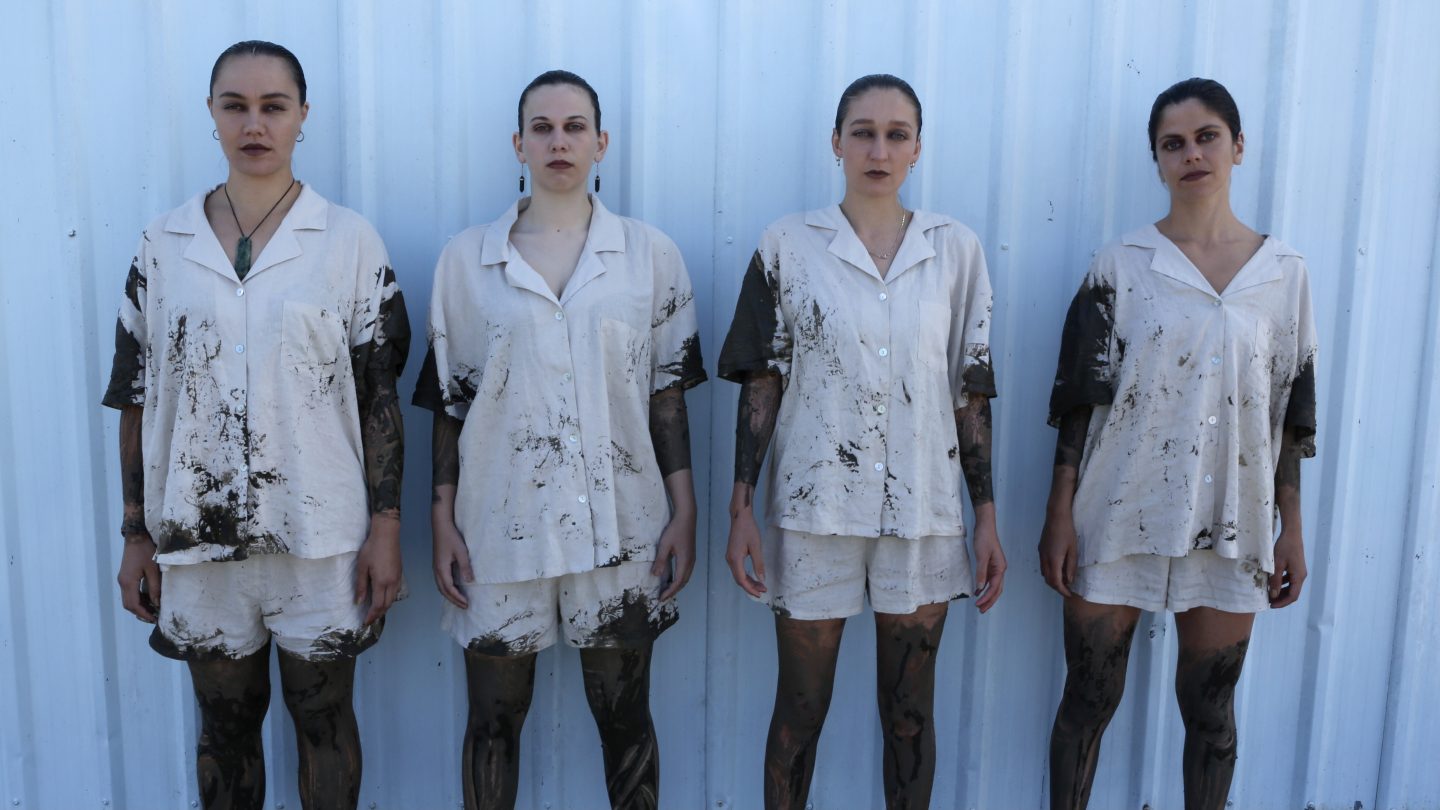 Over at the 1st Tamar Sea Scouts Boatshed Fflora, a new femme ensemble comprised of Tasmanian and Melbourne musicians, explored the life and story of the river through improvisation.

“We looked at how the heartbeat of the river had changed, and how we could offer something to the river musically, honouring its journey”, says percussionist Maggie Abrahams of Fflora.

Fflora incorporated field recordings of insects around the Tamar River and at Cataract Gorge, and pampas grass on Tamar Island, which is identified as an invasive weed in Australia. 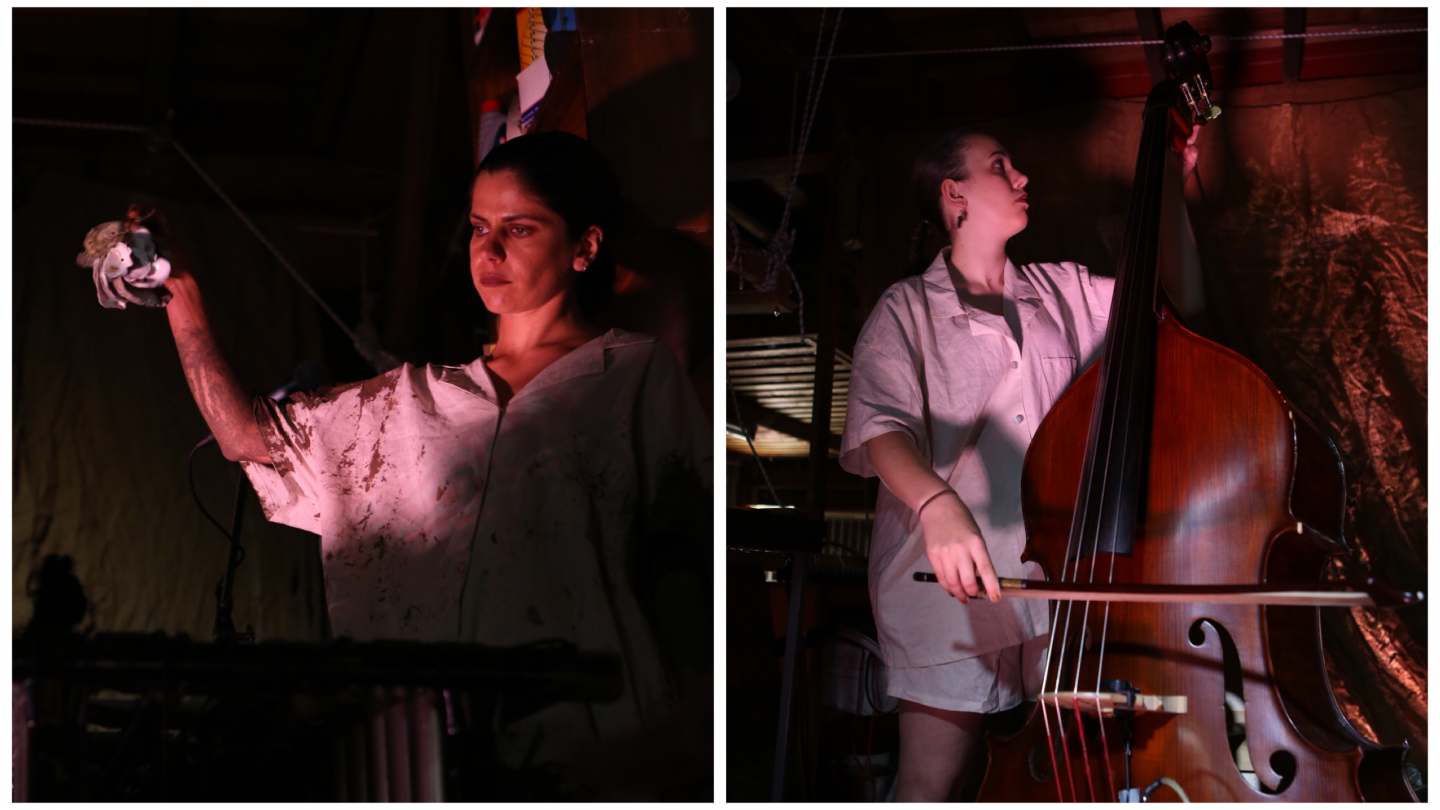 “A big part of the composition was finding ways to actually bring the river into the shed” says Maggie. “Vocally we tried to create similar sounds that were inspired by the recordings. The pampas grass sounds really beautiful, almost like the ocean when the wind’s running through it”.

Dressed in white, Fflora would cover themselves with the cold mud of the river and sway in time to the improvised sounds of ethereal harmonies, double bass and percussion.

Maggie says that there is a real gap in the improv scene, which has been traditionally dominated by male artists. “It’s important that there are more women and non-binary gender diverse people in that space, because it’s so underrepresented” says Maggie. “I love hearing how different people improvise. It’s not actually about your skills or your chops or complex jazz harmony, it’s about your inner creativity and how you express that”. 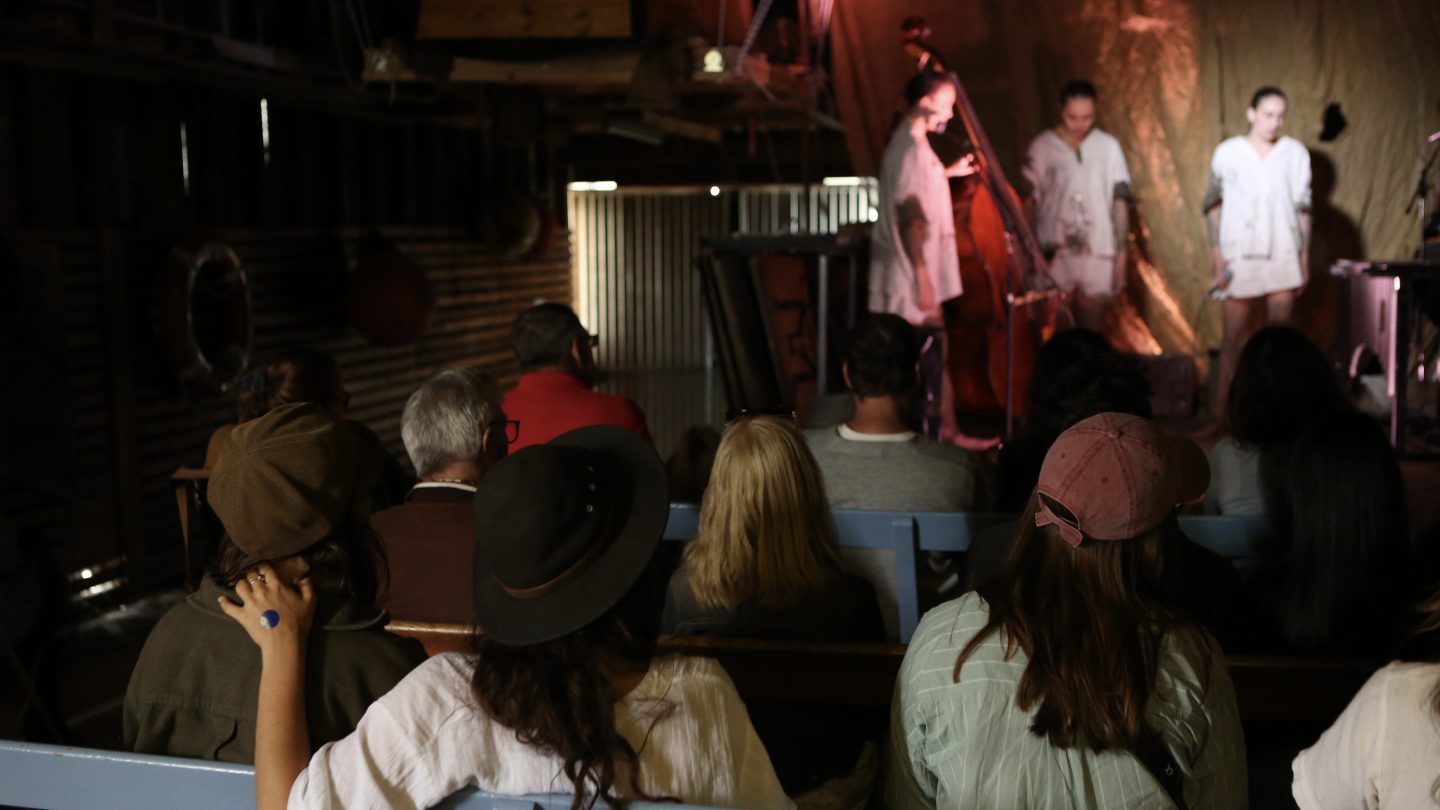 Artists feeling comfortable and relaxed with each other is also key to improvisation, says Maggie. This was something which came naturally to the ensemble as many of them had performed with each other in various bands and outfits over the years.

By the end of the festival weekend, Maggie says they almost felt like they were part of the river.

“We got in this real zone covered in the mud of the river, smelling the river in the dark, paying this tribute to the river, by the end of it we felt like mud spirits.” 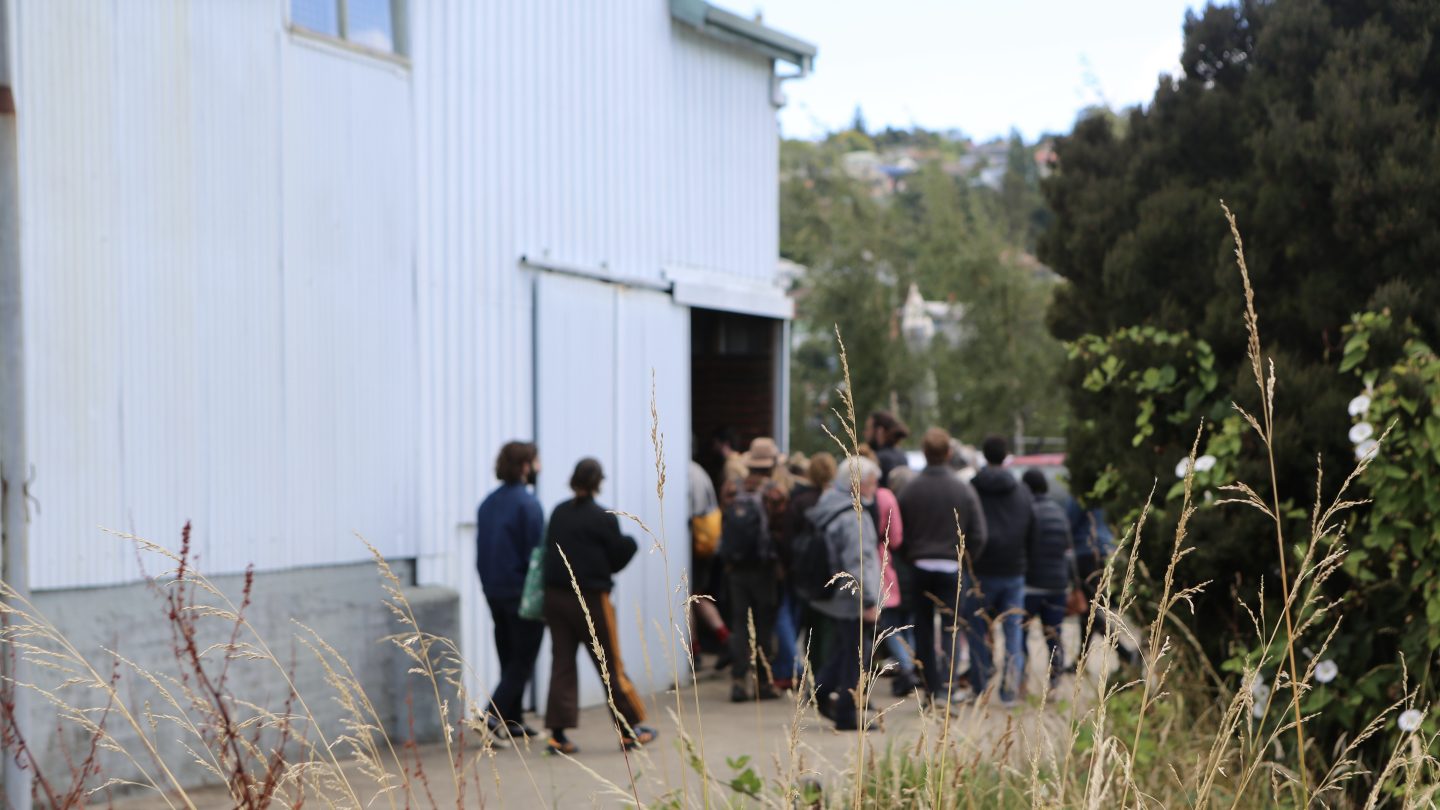 “Acoustic Life of Boatsheds is my favourite all time gig. It’s wonderfully rich in inspiration responding to the acoustics, visuals and story of a place. It’s also very freeing to be able to really focus on something like a shed, you can go as deep as you like. The best part was having time to work on something so intensively. It’s very rare you get the space to hothouse an idea intensively and as an ensemble, it was amazing.”