NEO-Learning is a fun new digital resource celebrating living culture, co-created by young people from Ieramugadu (Roebourne), in the Pilbara. Currently being piloted at schools around the country, today we hear about the genesis of this initiative and how it's going to put Roebourne kids on the map.

“Everyone always said that NEOMAD was such a strong resource, that it should be in schools everywhere”, says Big hART Associate Artist Mark Leahy. “Young people of Roebourne would be the teachers, they were central to NEOMAD so they’d be central to NEO-Learning, so we went about exploring how best to do that.” 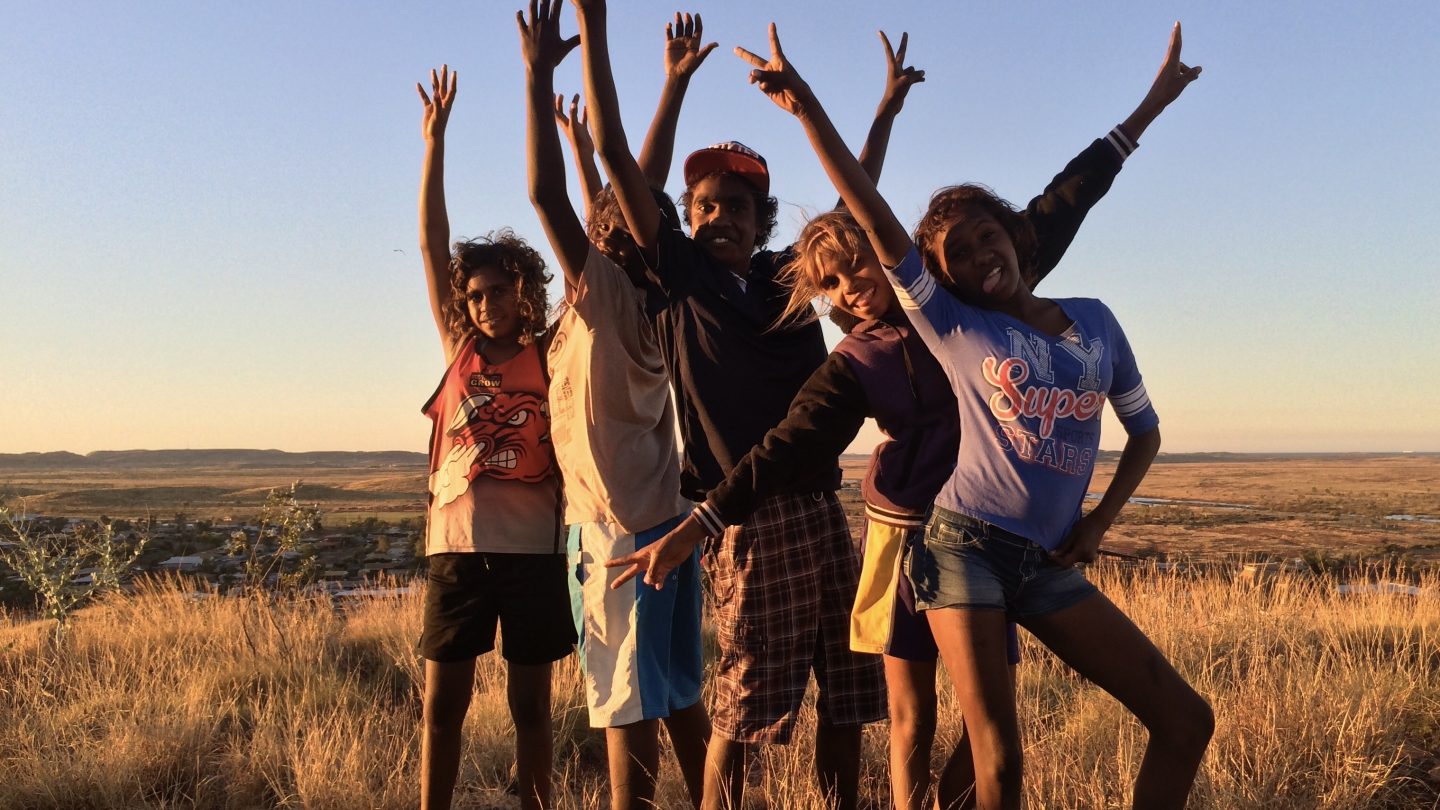 The early days of Big hART working in Roebourne, 2013.

Big hART was first invited to work in Ieramugadu (Roebourne) 10 years ago by senior women Elders, who wanted Big hART to deliver projects which highlight heritage as living, continually evolving in the here and now. It was thereby vital that NEO-Learning celebrated living continuous culture, and was co-created by young people from Roebourne and guided by Elders and senior members of the community.

Development on NEO-Learning began in 2018, and was activated by Big hART’s award-winning sci-fi comic NEOMAD. 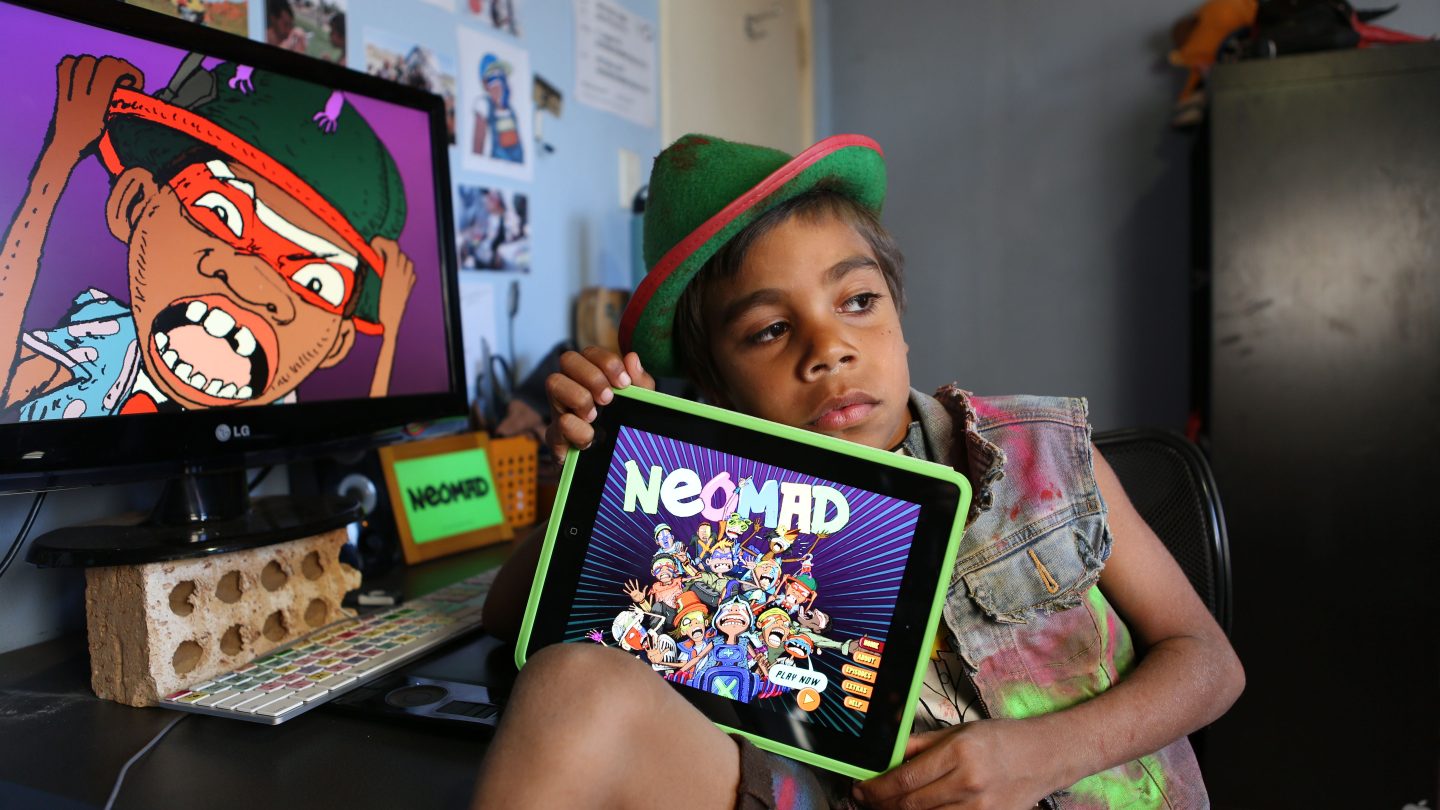 NEOMAD went on to win many awards. Photo: Chynna Campbell

The NEOMAD comic was created with over 40 young people in the community, through workshops in scriptwriting, literacy, Photoshop, filmmaking and sound recording, led by artist Sutu.

NEOMAD follows the adventures of the Love Punks and Satellite Sisters in an imaginary world of spy bots, magic crystals and mysterious petroglyphs. The NEOMAD project went to LA, Korea and Poland, with the comic and iPAD App winning many awards, including the Gold Ledger, Australia’s most prestigious comic book award.

Big hART is developing NEO-Learning as a digital education resource for schools which positions young people as teachers, who share with students nationally the living classroom on country. It is also designed with the requirements of ACARA in mind, the national curriculum reporting authority, which requires all teachers in Australia to include Indigenous culture and history in their subjects. 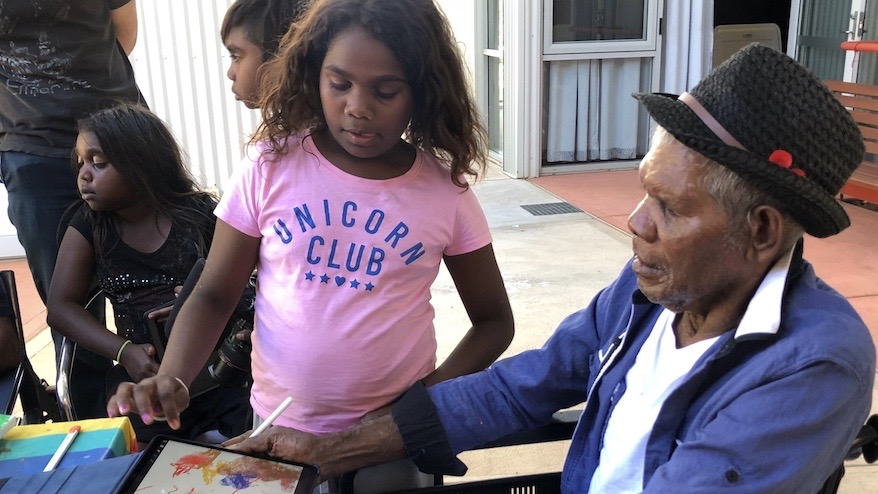 NEO-Learning was successfully admitted into Telstra Foundation’s Tech4Good program, which supports the business development of social impact projects in the non-profit sector. Telstra’s support is taking NEO-Learning  from an early stage concept to a tested prototype, allowing Big hART to harness creativity, experimentation, digital innovation and business acumen for the project.

“What is so great about the Tech4Good program that Telstra has put together is that they want us to continue learning”, says Mark Leahy, “Encouraging us to user test NEO-Learning as much as we can, but in a really quality way.” 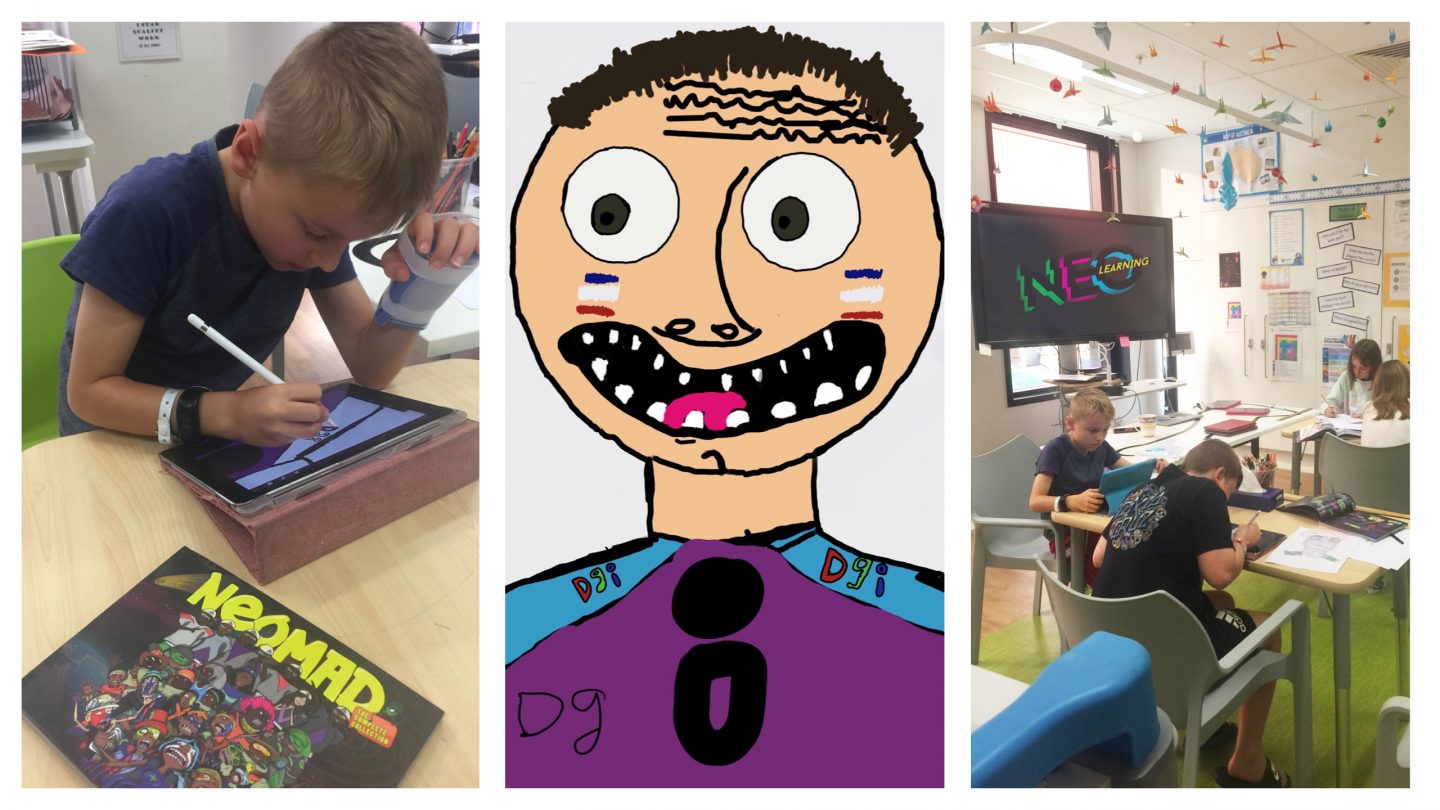 Now NEO-Learning has come through the early development stage, the first units of learning are being piloted in schools around the country in 2020, with the aim to pilot in up to 50 schools this year.  Young people from Roebourne have been involved in early workshops and testing of NEO-Learning, featuring in films and participating in digital drawing, with their work in the Digital Lab feeding into all aspects of the initiative.

“The potential for what we have in Roebourne is a wonderful opportunity to use the digital media platform as a tool” says Michelle Adams, a Yindjibarndi woman and Big hART cultural advisor and board director. “It’s a new way of learning that takes the world’s oldest living culture.”

“In the work we do it’s so important to acknowledge that heritage is a future concept. Intergenerational learning is very much the model of how we would learn from a grandparent for example. To keep the collaborative approach strong, we discover all our different knowledge systems together. The Elders guide the process of what is teachable.” 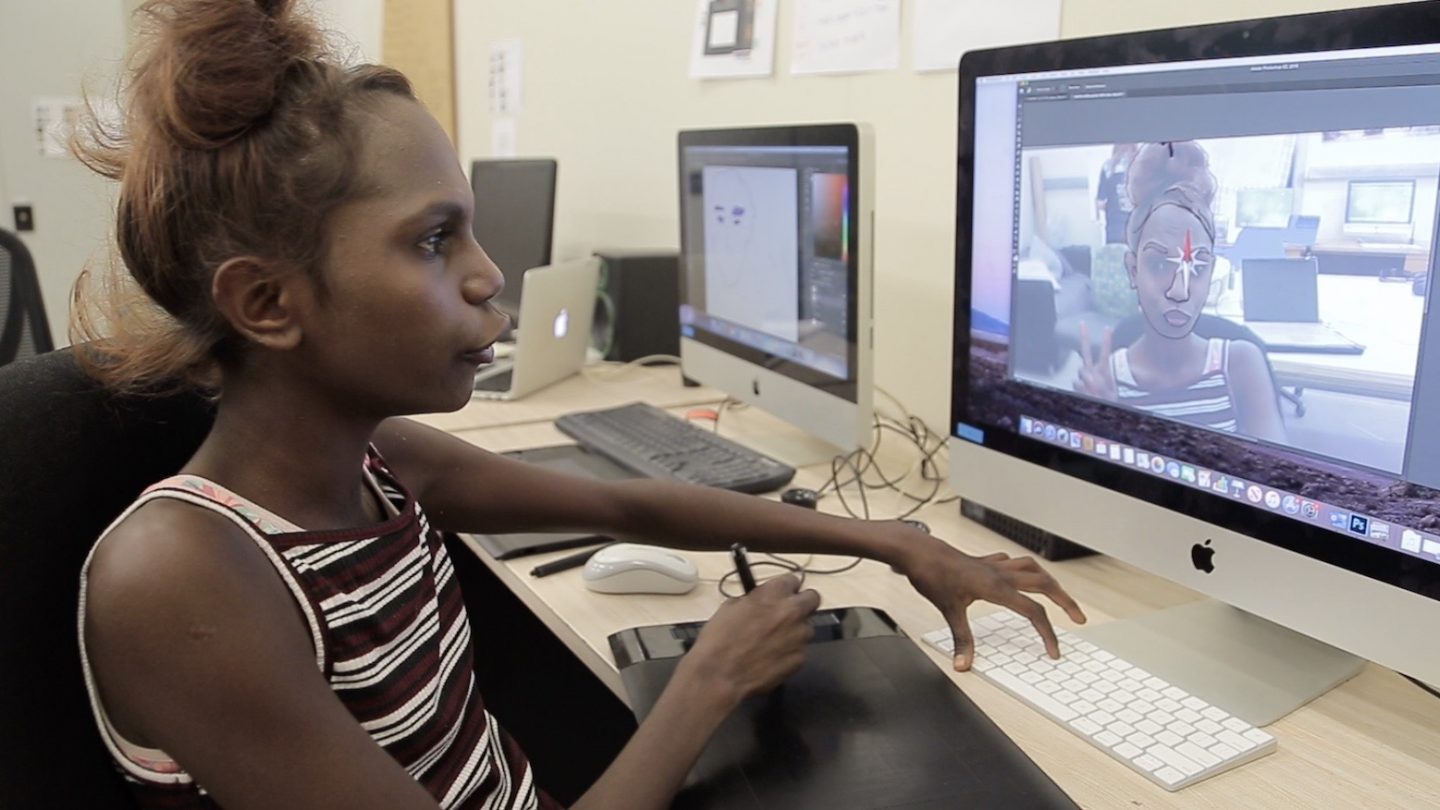 NEO-Learning has already engaged with close to 500 students in schools in NSW, Victoria, Tasmania, Western Australia & SA, with the user experience designed to be fun, engaging and future focused.

“I really believe that only the best content holds up on virtual modes” says April Phillips, the Creative Learning Producer of NEO-Learning. A Wiradjuri educator and digital artist, April has been a virtual educator for a number of years, working with clients such as Parliament House, The National Gallery of Australia, Museum of Australian Democracy, Art Gallery of SA, and The National Portrait Gallery. 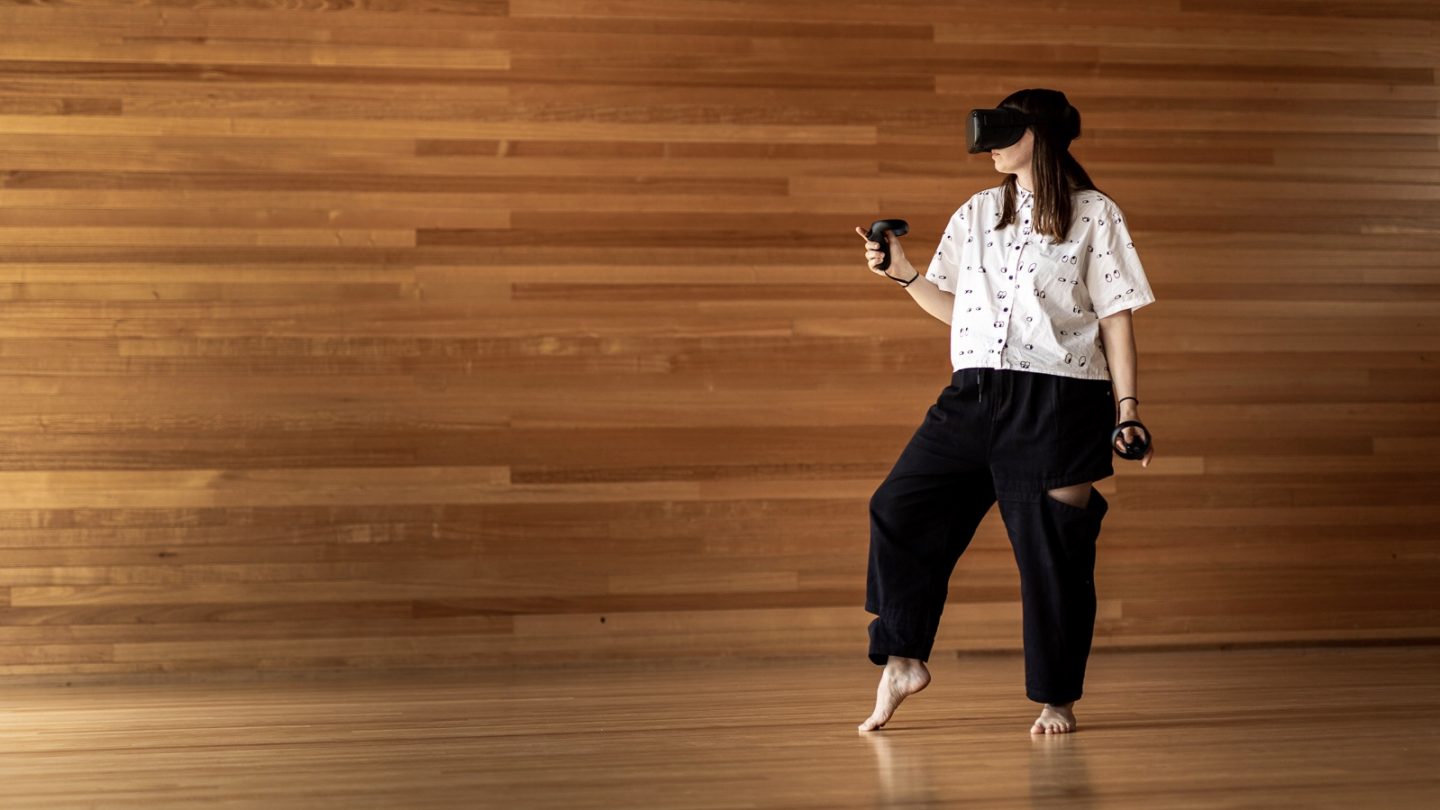 April cites her Elders and learning Wiradjuri language as central to her approach. “The perspective I have in both areas is to connect ideas together, to make sense of who we are, where we are, in the time we are living.”

Early feedback from schools has been positive and encouraging. “Teachers are saying that it’s great to have a resource that’s so future focused”, says Mark Leahy. “Kids have enjoyed learning about the geography of the Pilbara and Murujuga in particular.” 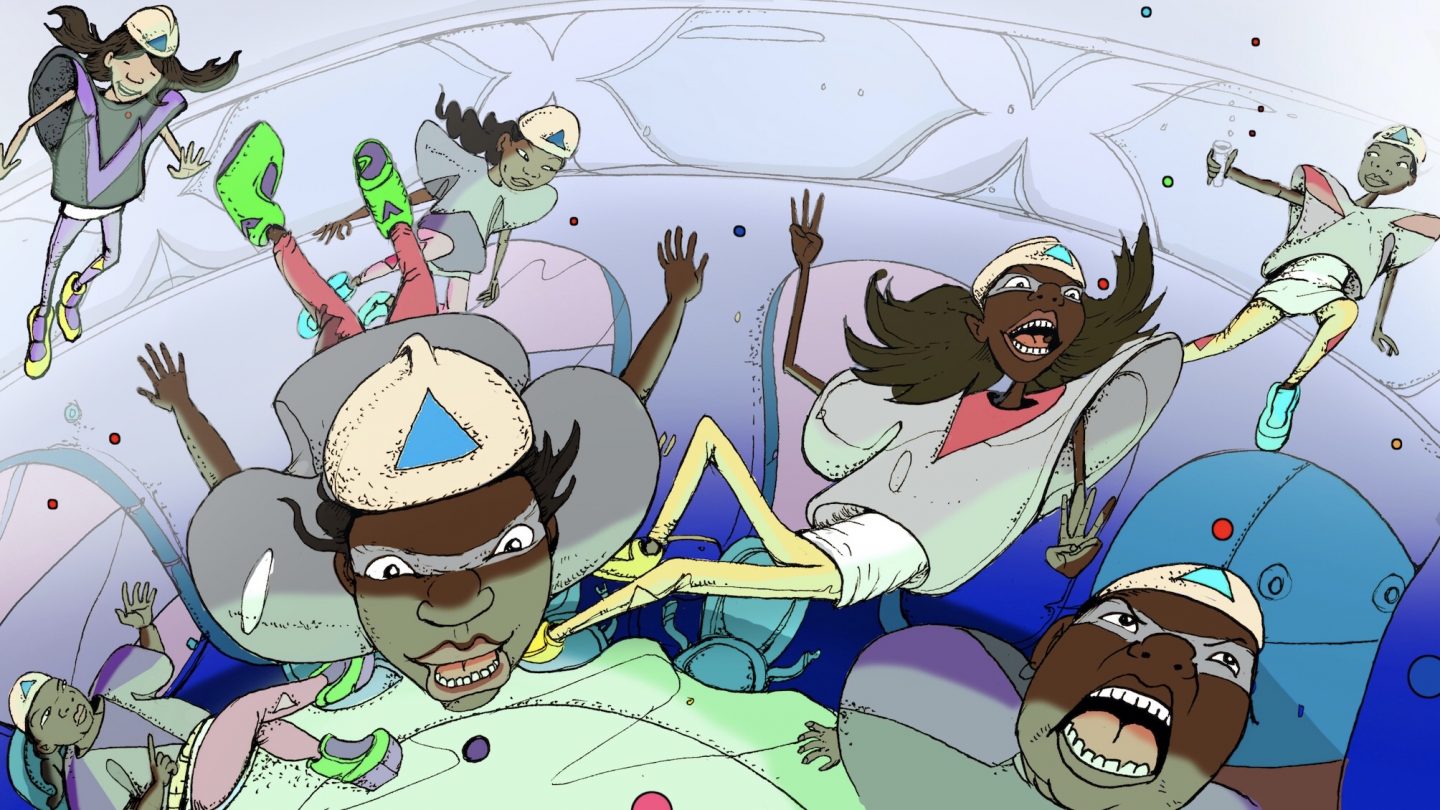 A scene from NEOMAD – the Satellite Sisters.

The importance of fun is central to NEO-Learning, keeping students engaged and energised by the content.

“At NEO-Learning we pride ourselves on putting fun at the centre of everything we do” says April Phillips. “Students have been key to how we have fine-tuned the unit of learning, we work with them to diversify the activities and make everything relevant and engaging. NEO-Learning is activated by the sci-fi comic NEOMAD – maths, literacy, geography and digital drawing in three action-packed one-hour sessions.” 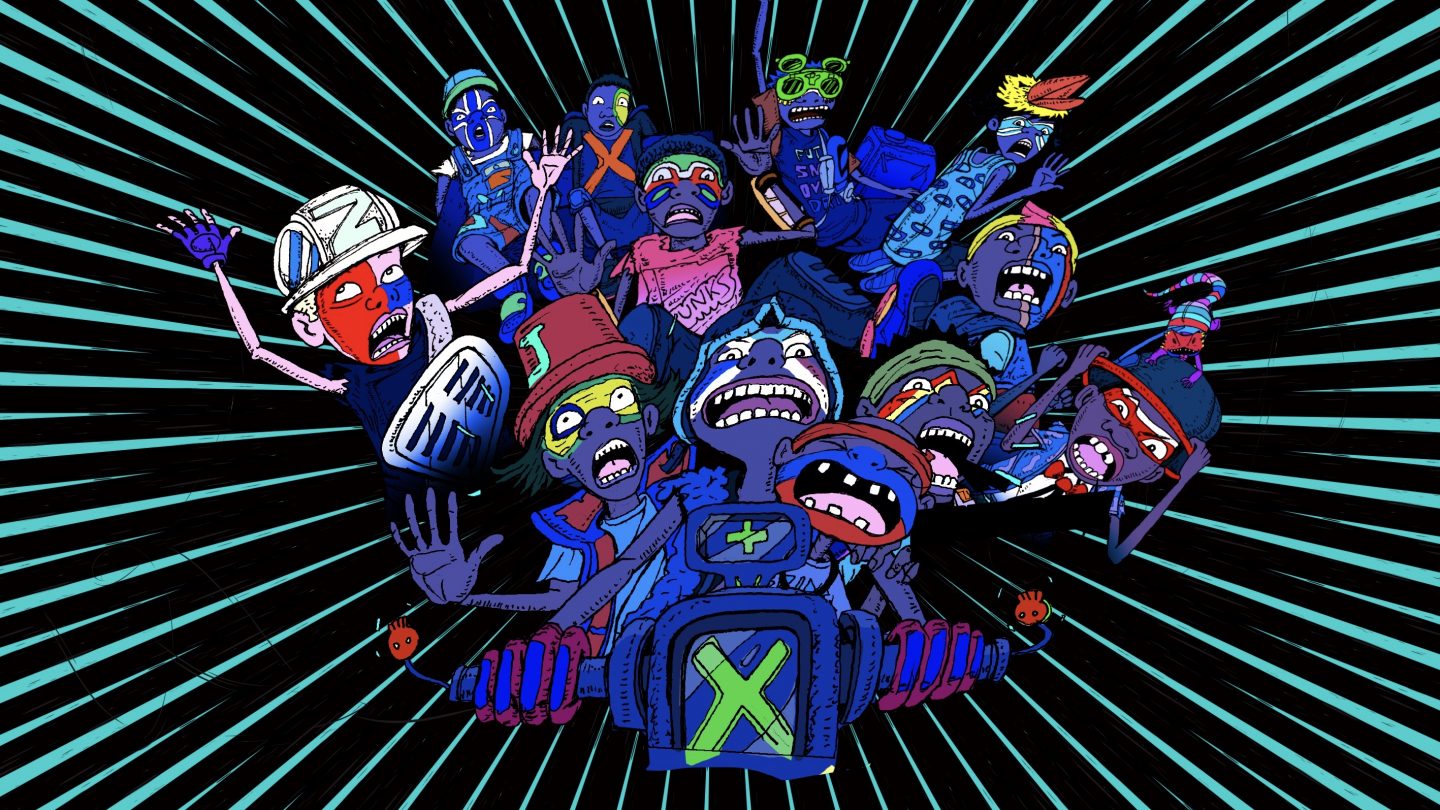 Fun is at the centre of NEO-Learning. Artwork from NEOMAD.

Mark Leahy has spent quite a bit of time in Roebourne and says it’s a place that is very close to his heart, one of the most exciting places he’s been. “Young people in Roebourne have this sense of humour which is cheeky, irreverent and fun – that is very much part of the identity of NEO-Learning”, says Mark. “I learn so much every time I’m up there. I want other people around the country to have those experiences and tap into the energy and knowledge and care and fun.”

“NEO-Learning is always centred in the future, so we are looking at the horizon at ways we can build up the Digital Lab in Roebourne”, says April Phillips. “We rely on young artists who work there to inform all of our directions and teach us grown-ups what’s next.” 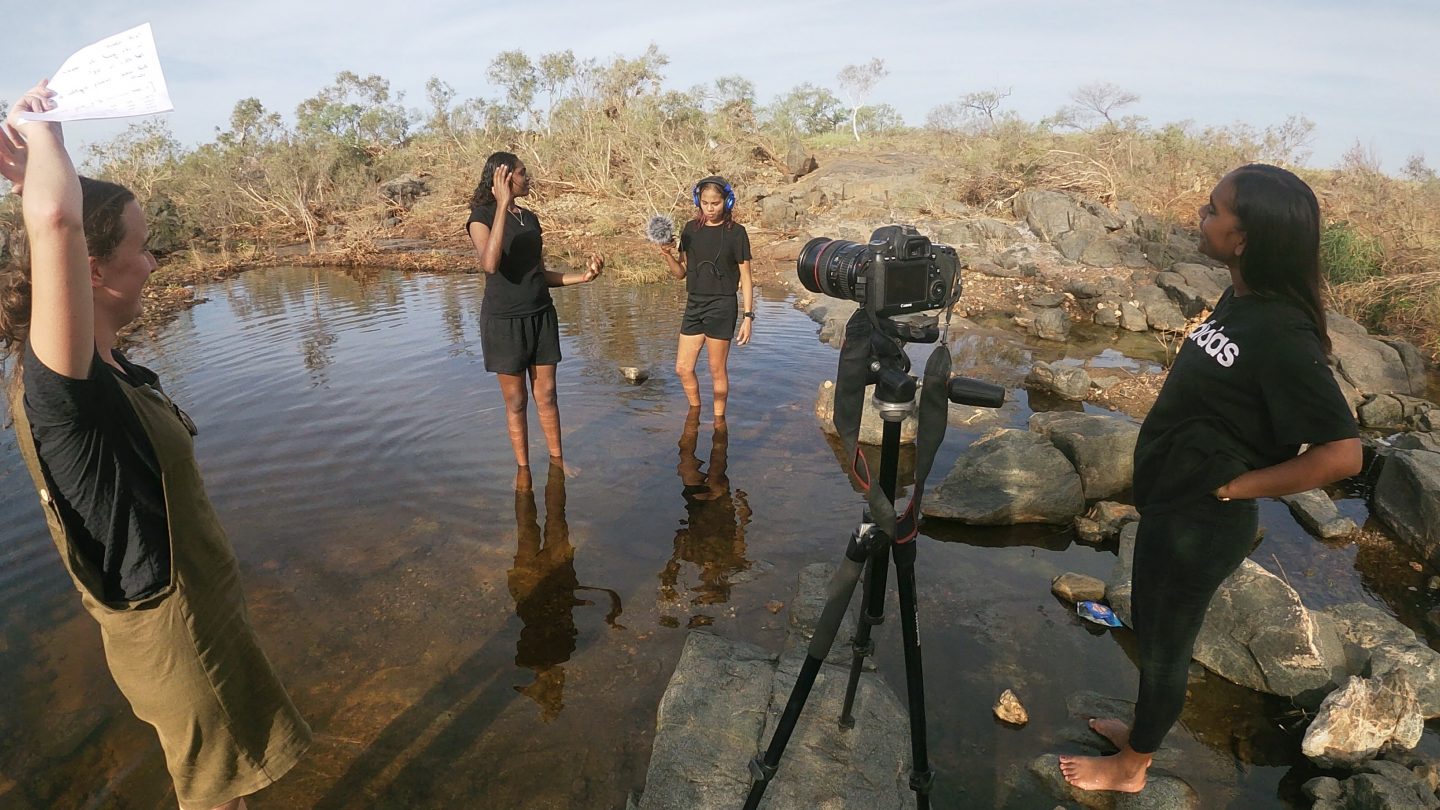 “We also offer units of learning hosted by live educators, which means teachers take a moment away from delivery and co-learn with their students”, says April. “If I could give three top tips for an educator navigating online learning I would say – be yourself, always offer test connections and find out what online learning can do that face-to-face learning cannot and make the most of these features.”

Yindjibarndi woman and cultural advisor Michelle Adams has advised Big hART over many years and participated in many projects. She is excited about the potential of NEO-Learning – it’s power to unlock new pathways for young people in Roebourne, and the role technology can play – helping keep culture and language alive.

“Young people are learning, I am learning” says Michelle Adams. “NEO-Learning is learning in action. With language and a mixture of media tools we also connect to the outdoor learning area, which is one of the exciting initiatives of the project. The preserving of languages is necessary for the education of the whole person, connected to their lands. We allow ourselves an amazing opportunity to gaze through a window or walk through a virtual door and hear and see co-learning with Aboriginal students and their schools taking place. Keeping Yindjibarndi stories alive, keeping Ngarluma stories alive.”

Big hART would like to acknowledge the Elders, senior members and families of the community of Ieramugadu for their generosity and patience, and for supporting the work of Big hART in the community.

To find out more about NEO-Learning, go to the website www.neolearning.com.au