Opportunity & Identity – My Journey as a palawa Woman to University

Kaytlyn Johnson was just named the Young Tasmanian of the Year for 2022. A palawa student & singer-songwriter who grew up in a remote corner of Tasmania, Kaytlyn joined Big hART's Project O in 2016 and discovered invisible issues and the power of speaking up to create change. Now attending the University of Melbourne on a scholarship, Kaytlyn shares her story and what's helped her along the way.

“I didn’t know what I was getting myself into. I wasn’t aware that I was a victim of this isolated label that’s put on North West Tasmania, and all the issues going on. Project O gave me a platform which was not there for young women in the community“, shares Kaytlyn Johnson, the 2022 Young Tasmanian of the Year, in this first-person piece.

Life on the North West

I grew up in Lapoinya, in the North West of Tasmania. My passion since I was a child has been music. The North West Coast is quite a rural area, and isolated in terms of opportunity and platforms to speak openly about issues in the community. I feel some issues are not addressed. But all that aside, I wouldn’t want to grow up anywhere else. It’s very small, everyone knows each other and it’s a beautiful place to live. 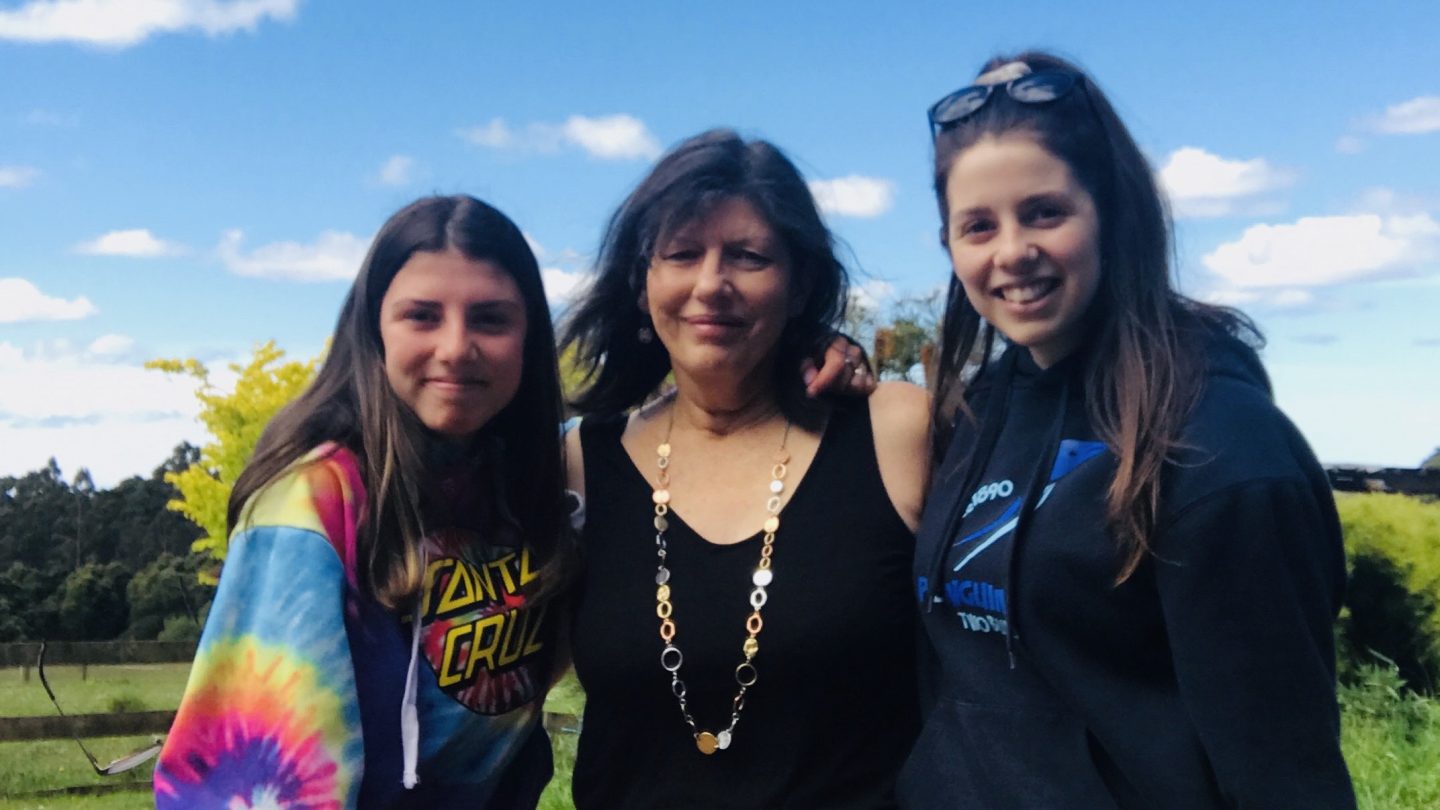 Kaytlyn with her grandmother and sister in NW Tas. Photo: Supplied

Project O was offered as a dance and drama group. I didn’t know what I was getting myself into. I wasn’t aware that I was a victim of this isolated label that’s put on our community, and all the issues going on. It developed into more project management, emotional wellbeing, emotional intelligence and how we can impact the community. Later on we started entrepreneurial activities. It made me realise that our voices are worth hearing and we have important things to say. It gave me the opportunity to speak out. Project O gave me a platform which was not there for young women in the community. The opportunities that I was given was the biggest asset that I got from Big hART. That was proved when the community started to realise that it was the younger generation of women making change in the community for everyone, not just for us, but for people who were having their lives destroyed by family violence. 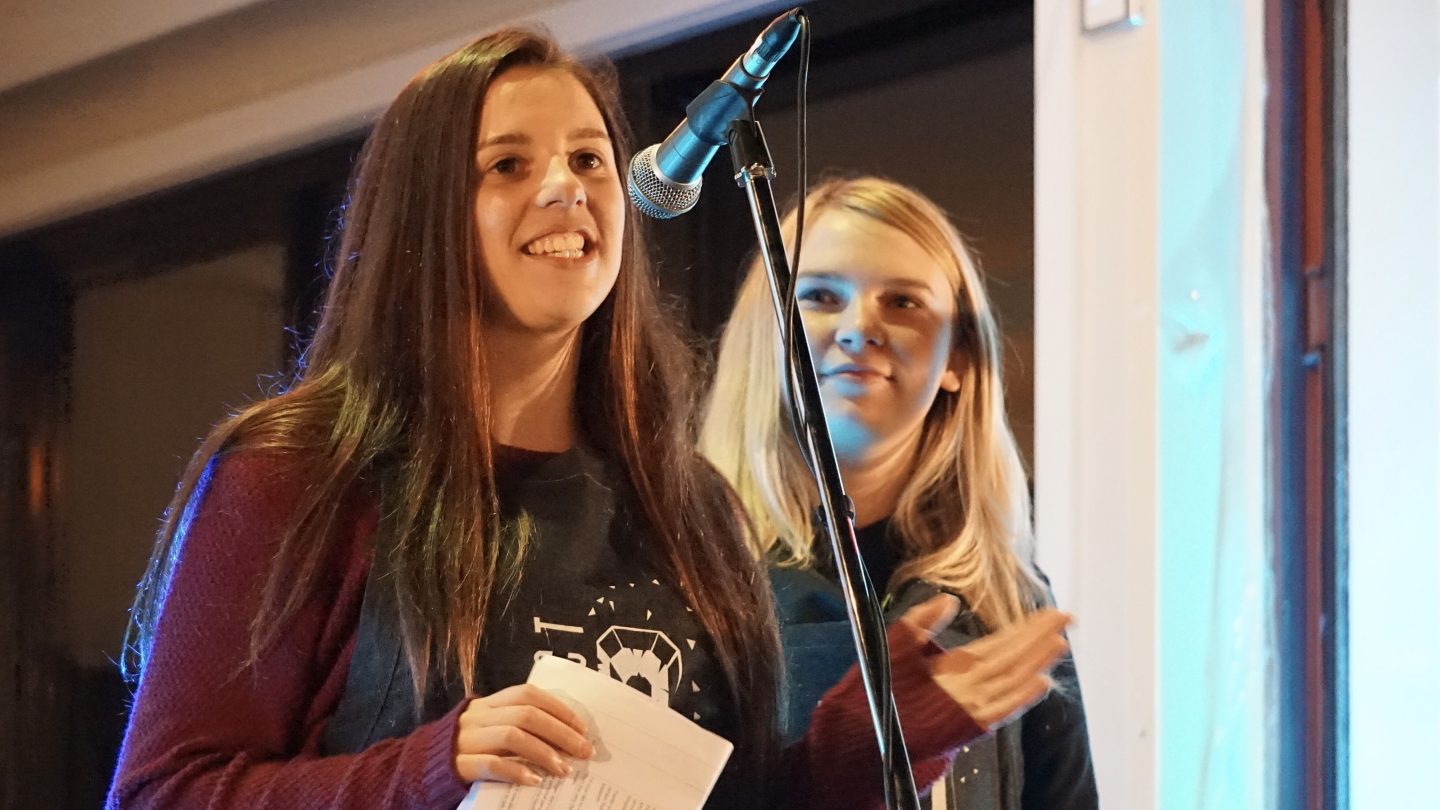 I really loved the Acoustic Life of Sheds. You had artists coming together, but also the next generation of Project O girls coming through. It was so cool to look at those girls, having known them from quite a young age. Seeing them step into my shoes and get their hands on those opportunities. It was quite empowering to see that happen.

In terms of mentors, I did a lot of work with Claire Anne Taylor on performing and songwriting, and she’s been in my life for quite a long time. I look up to her in my personal life but also in terms of music, and where I want to be as a musician. She’s definitely my biggest inspiration.

I was given a pretty amazing opportunity by the University of Melbourne with a scholarship. It opened my eyes to realise that I could pursue academia. It gives me an opportunity to go anywhere I want in terms of employment after university, but it’s also learning about myself, and studying to get the best out of myself. The underlying thing I would like to do is music but it’s nice to have that safety net with science, there’s so many opportunities under that umbrella.

Life is very different in Melbourne. I think it’s more money driven. Over here we’re more down-to-earth, more relaxed in Tassie which is nice. Next semester I’m looking at a Diploma of Music. It’s concurrent, so I do it at the same time as my science degree, and I get a qualification at the end. I’m still writing music and looking at doing more management and recording. Melbourne is a hub and the music scene is huge. I really want to pursue that heavily – I’m excited. 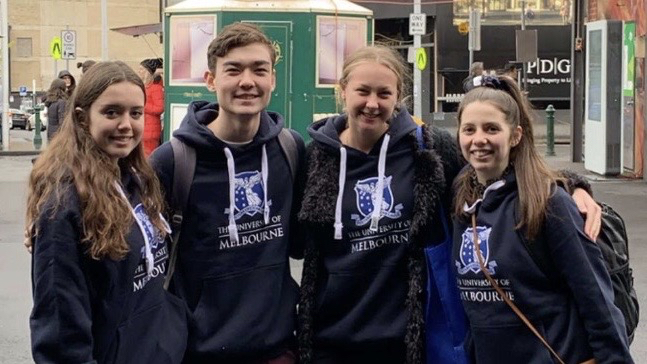 Kaytlyn with friends from University of Melbourne. Photo: Supplied

Project O helped me connect in with my Aboriginal identity.  I’ve always felt lost in that area because the Tasmanian history is so hard to flesh out. I’ve also had some experiences over the years with lots of different Aboriginal communities around Australia.

Moving to Melbourne has reinforced my identity because I’m involved with Murrup Barak at the university, a group of Indigenous students all wanting to know more about their culture, and wanting to get the best out of themselves at university. That’s been so helpful in that journey of trying to figure out where I sit culturally.

I know who I am. I know that I’m blak but I don’t know the full story of my ancestral history. That’s really hard for me sometimes – explaining to people. They just want to get a clean answer of my mob and stuff, but you can’t always give that as a Tasmanian Aboriginal. It’s been an interesting journey, definitely pushing forward with that, always will be. 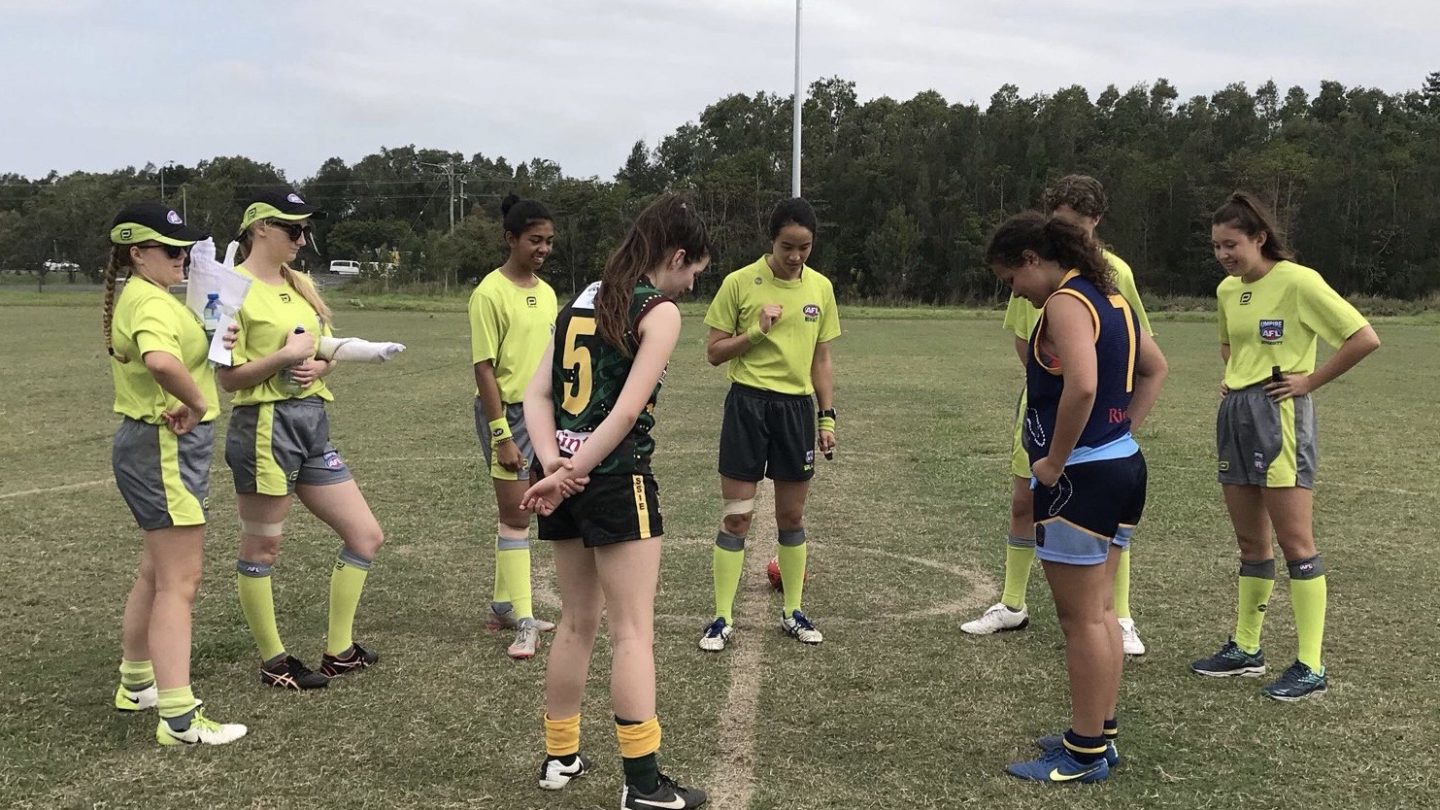 I am in a college of 300 other adults who come from everywhere.  There’s all these people, they’re quite well off, and our backgrounds are quite different. When I’m socializing I feel like I’m hiding something, like I’m hiding the fact that I’m not the same. You don’t feel you are worth it. That’s my biggest challenge – to prove my worth.

But it’s been a nice thing, this coming home during COVID-19. I think it will benefit me when I go back to have touched base with home. I’ll try to be proud of that and integrate with some people who have different backgrounds to me. In terms of study, it’s been a big jump, but that’s okay. I think that’ll come with time. What I’m focusing on the most is adjusting to the different lifestyle over there. 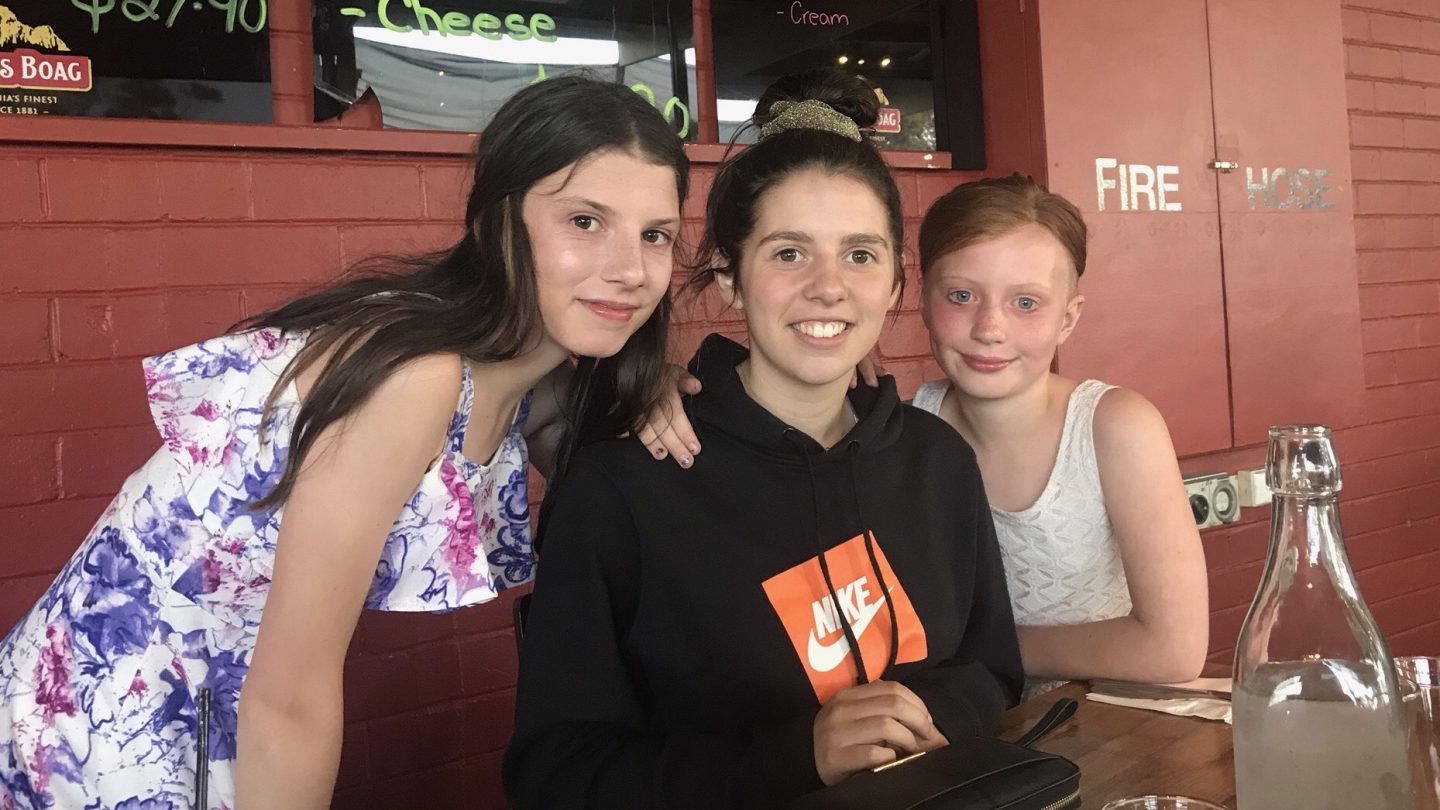 Kaytlyn at home with her sisters. Photo: Supplied

What’s helping me is having a list. Lists really help me. Have a list and a time limit on everything, stick to a plan. Go outside and go for a walk, that keeps you sane. It’s been good to be back home during this time. I didn’t know how much I needed it until I was here, it was such a relief. I really enjoy Melbourne, it’s so exciting and fun but I so needed to come back home and just refresh.

Advice to young people in the North West

Try everything that you can, because you never know where it’ll take you. Project O is the biggest example of that – I thought I was going to a dance class and I came out having raised over $12,000 for family violence. Try everything because there might be something that you didn’t realise you’d love. Also, seeking help when you need it really helped me in college and helped me get my place in uni. If I didn’t have that help I wouldn’t have got here. 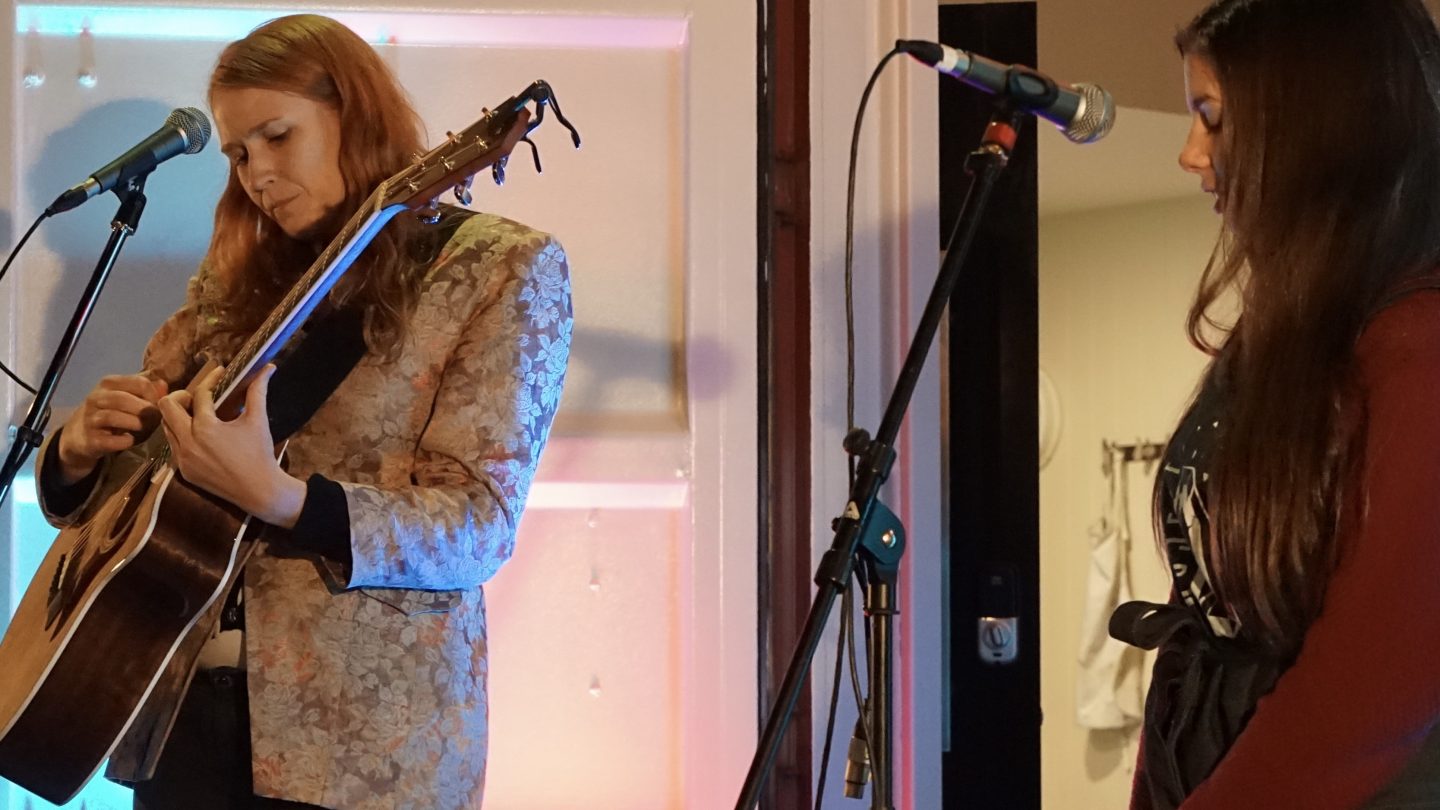 Project O gave me confidence, but it also made me realise that people put barriers around people from an isolated area that aren’t even there. Big hART gave me opportunities and a chance to see my worth, and see where I could aim for. I didn’t realise I would be able to aim as high as I did. It was great to work with so many other inspiring young women who have been through so much. People don’t even know what some of those girls went through, to be making change for everyone else! I’ll always respect them for that. 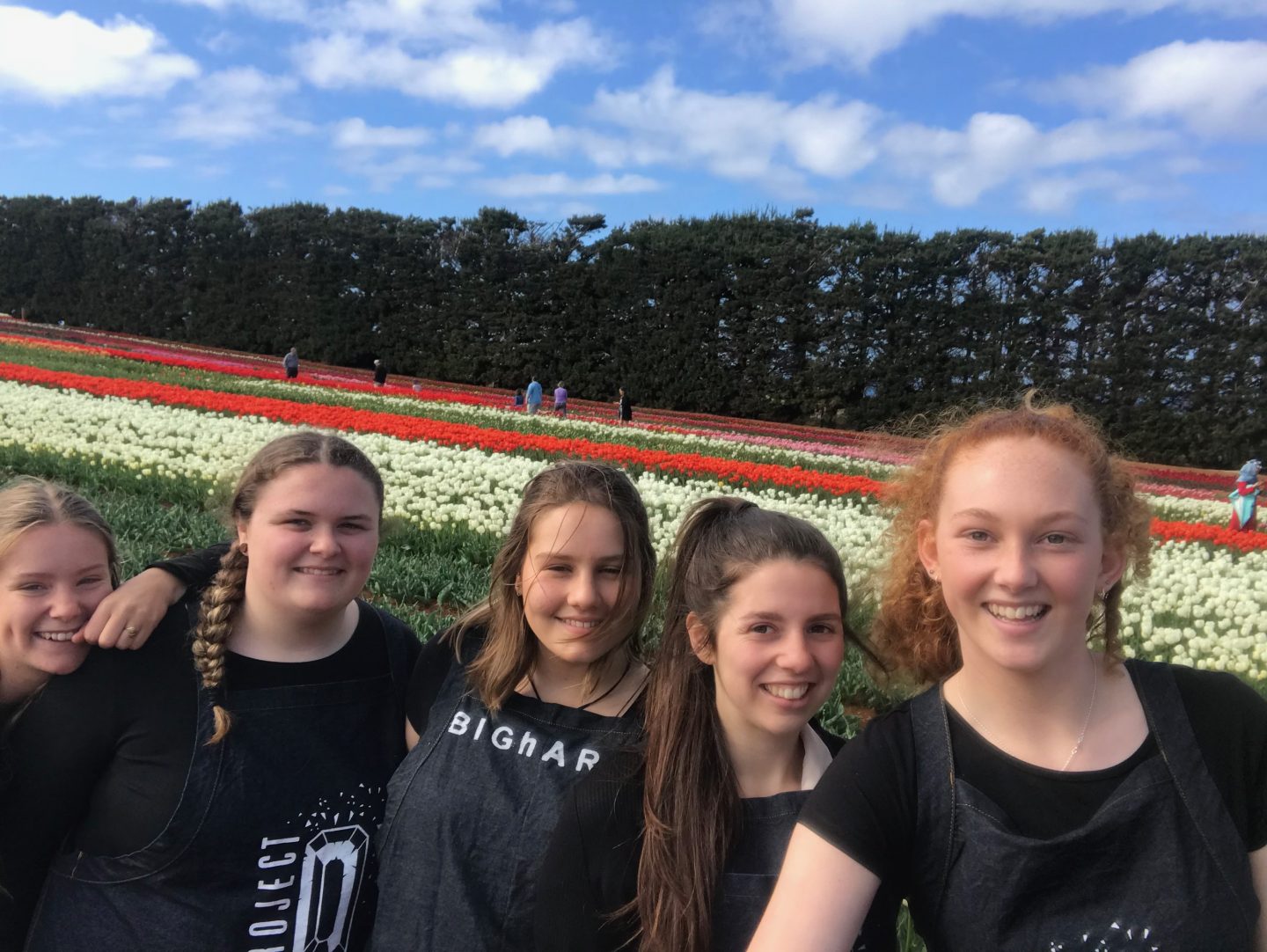 Kaytlyn Johnson was named the Young Tasmanian of the Year for 2022, read full story here.

Kaytlyn was a participant and mentor of Project O Wynyard. Project O operates in Wynyard and Smithton in NW Tasmania, Frankston VIC and Roebourne WA.

Words by Kaytlyn Johnson, edited by Bettina Richter. This article was first published in 2020 and updated in 2021.