The Origin Story of SKATE

Scott Rankin reflects on the beginnings of SKATE - from the early days of skateboarding, deck art and graffiti in Burnie, to playing with light and projection at White Night in Melbourne, to it's residency in the Cutaway at Barangaroo Sydney in 2019.

“Skateboarders are pretty altruistic and so are young people. SKATE’s been in Big hART’s DNA for probably 12-15 years.” SKATE Executive Director Scott Rankin reflects on SKATE’s early days in this first person interview.

“Telen Rodwell and some friends began… a thing called Sk8 Jam – it was competition based, but also deck art and graffiti. There were these events in Burnie which brought a lot of skateboarders together. At the same time the local council was getting rid of the skate park, and the skate stuff we were doing, interventions if you like, convinced the council to build a new skatepark. 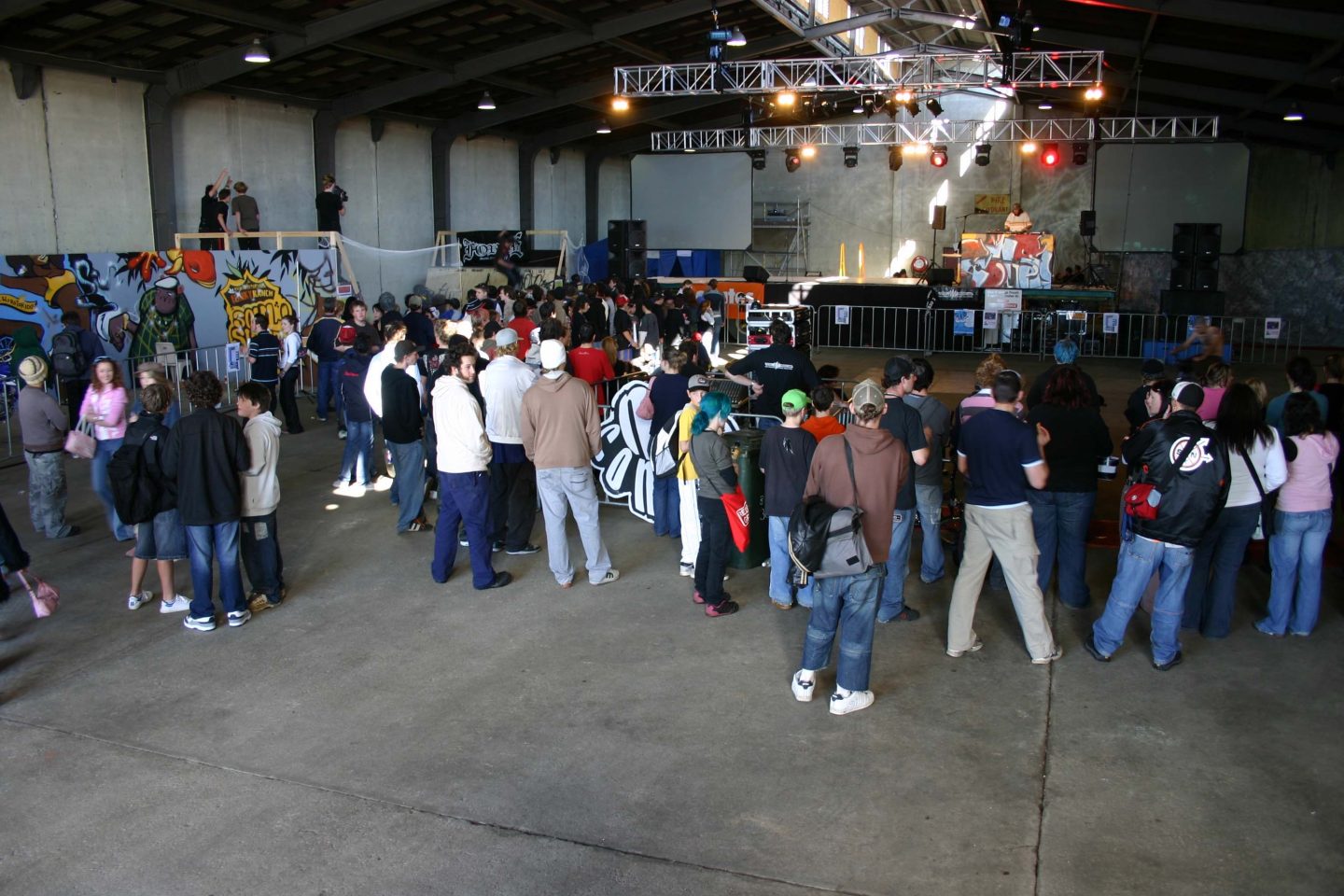 My son Locky was a young skateboarder who was mentored by Telen, they made films, they made a documentary called DRIVE which won some awards and had some skateboarders in it, and it was looking at rites of passage for young men. 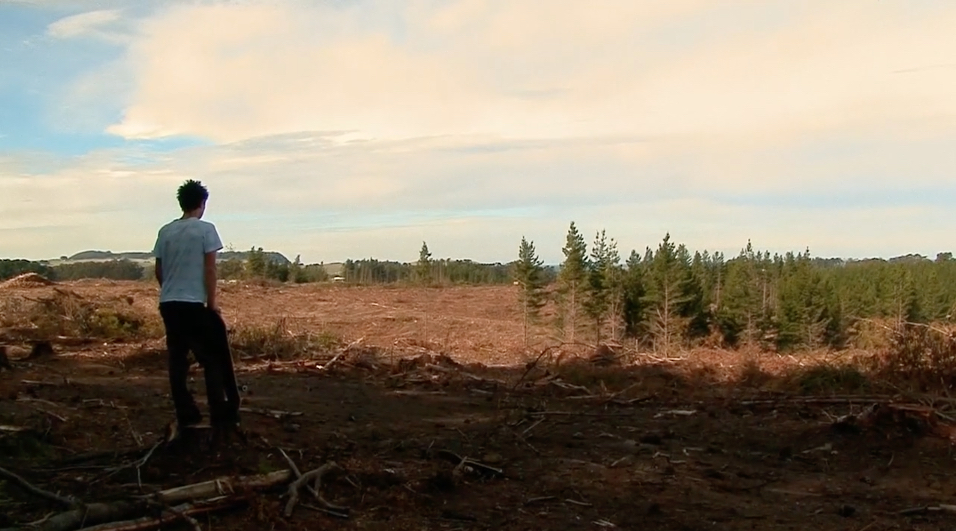 Sometime over that period I started listening to Locky when he was skateboarding and I built a halfpipe in the back garden. I’d listen to him when I went to pick him up, and I was thinking how skateboarding was really in time, because of the shape of the half pipe the sound is very regular. I wondered if you could skate in a way that was culturally satisfying but at the same time emphasising music, turning the half pipe into an instrument.

We were also working at Wynyard High, we put skateboarding into most of the productions we did with them. That allowed us to have skateboarding as one of the performative qualities and we trialed making music, and established that it would work. We also trialed the idea of projecting in a way that was interactive. In essence that was the first trial of SKATE, inside another show at Wynyard High, probably around 2013. 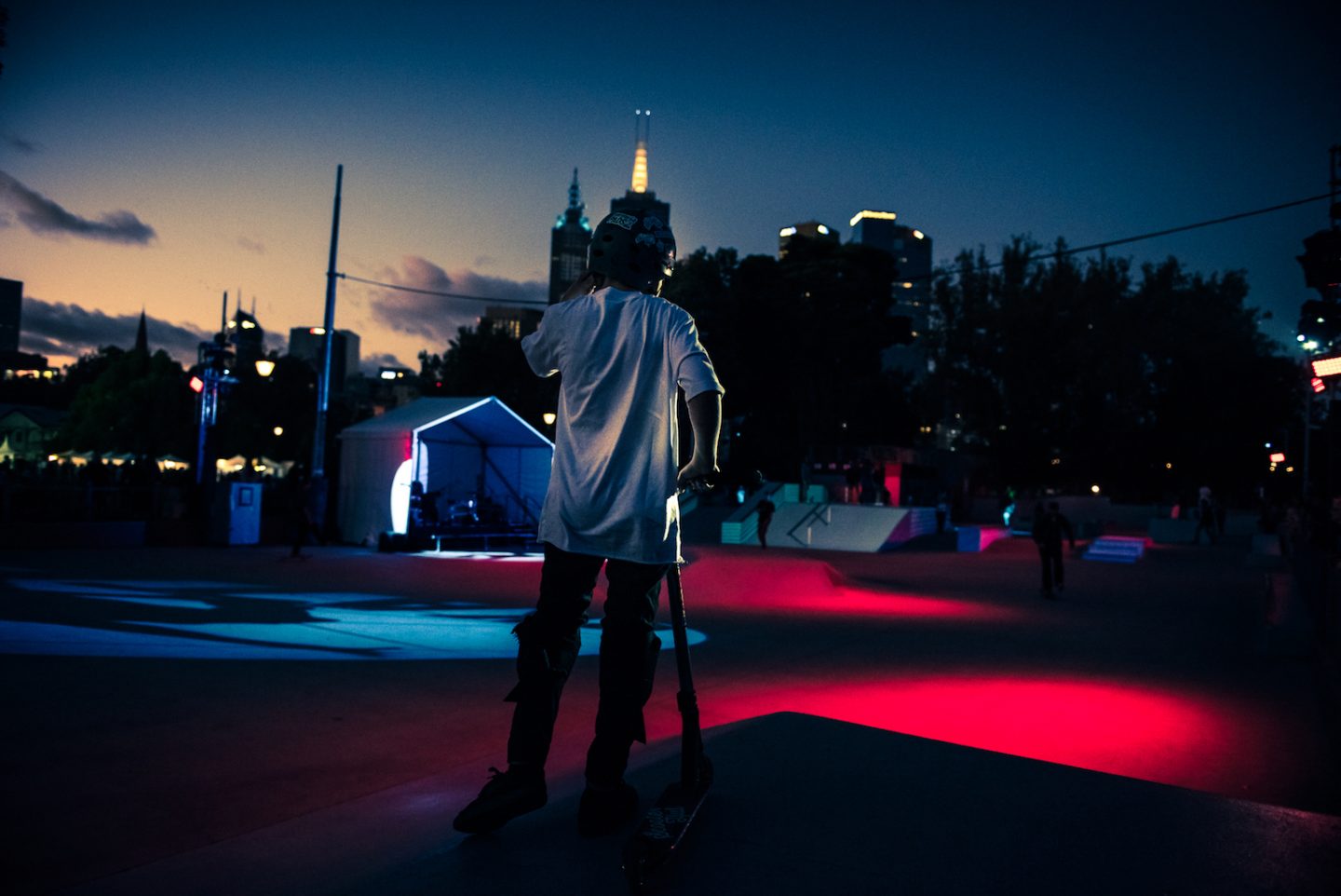 After that we knew it had some possibility, and we approached White Night in Melbourne and did a call-out audition to the whole of Melbourne. We were lighting up the skatepark and the audience would come and watch as we experimented with projections and music. The first tester in the mainland community, to see how skateboarders would feel, and whether we could maintain the correct cultural approach, at the same time as introducing those ideas of interactivity. Skateboarders who were pretty tough on making sure it was culturally appropriate have continued with it to this day – Liam Merrigan-Turner, Callum Donohue and Jacob De Leo, Locky also. We’ve now got skateboarders from Tasmania, Victoria, NSW, WA and Queensland who’ve been involved.

The literacies of skateboarding

Skateboarders are pretty altruistic, and so are young people. Skateboarders are thinking about the city in brand new ways and exploring the architecture. They are going into nooks and crannies and have a kinetic literacy about the shape of things in the city that is highly acute. They’re thinking outwards, and they’re wanting to pursue this artform for the sake of what it is. 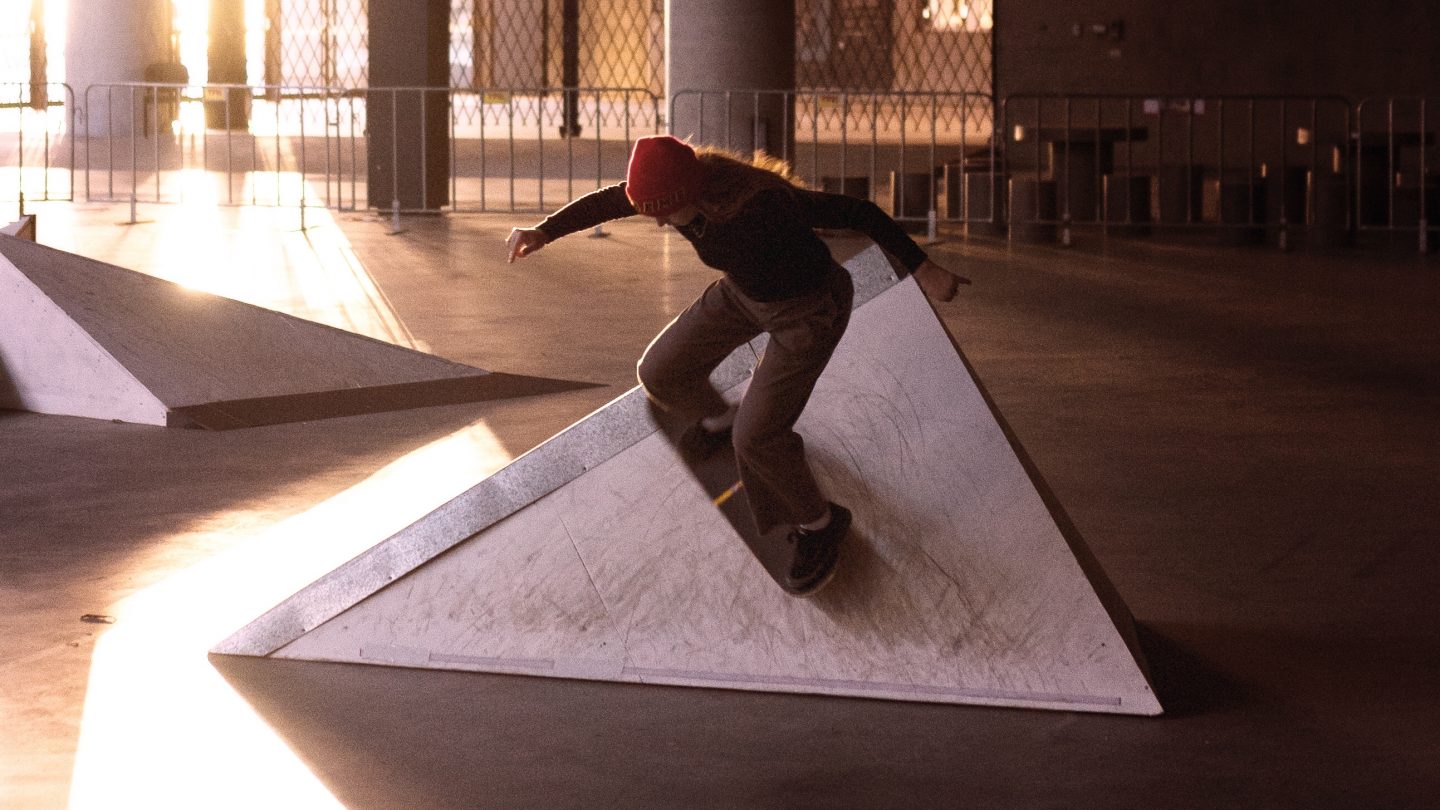 Often when you think about the way we educate young people, we fit into a curriculum that’s based on the 3 Rs or on STEM, and it’s asking people to be educated in conservative ways, with a high failure rate based on what is required for the 19th Century. But if you look at the multiplicity of different literacies we could be calling on- if you can skateboard and fall well, and not injure yourself, you intuitively know something, and have an interest in the biomechanics of your body. The way an ankle works, the way a knee works, the way you are travelling in space and the way you should fall. 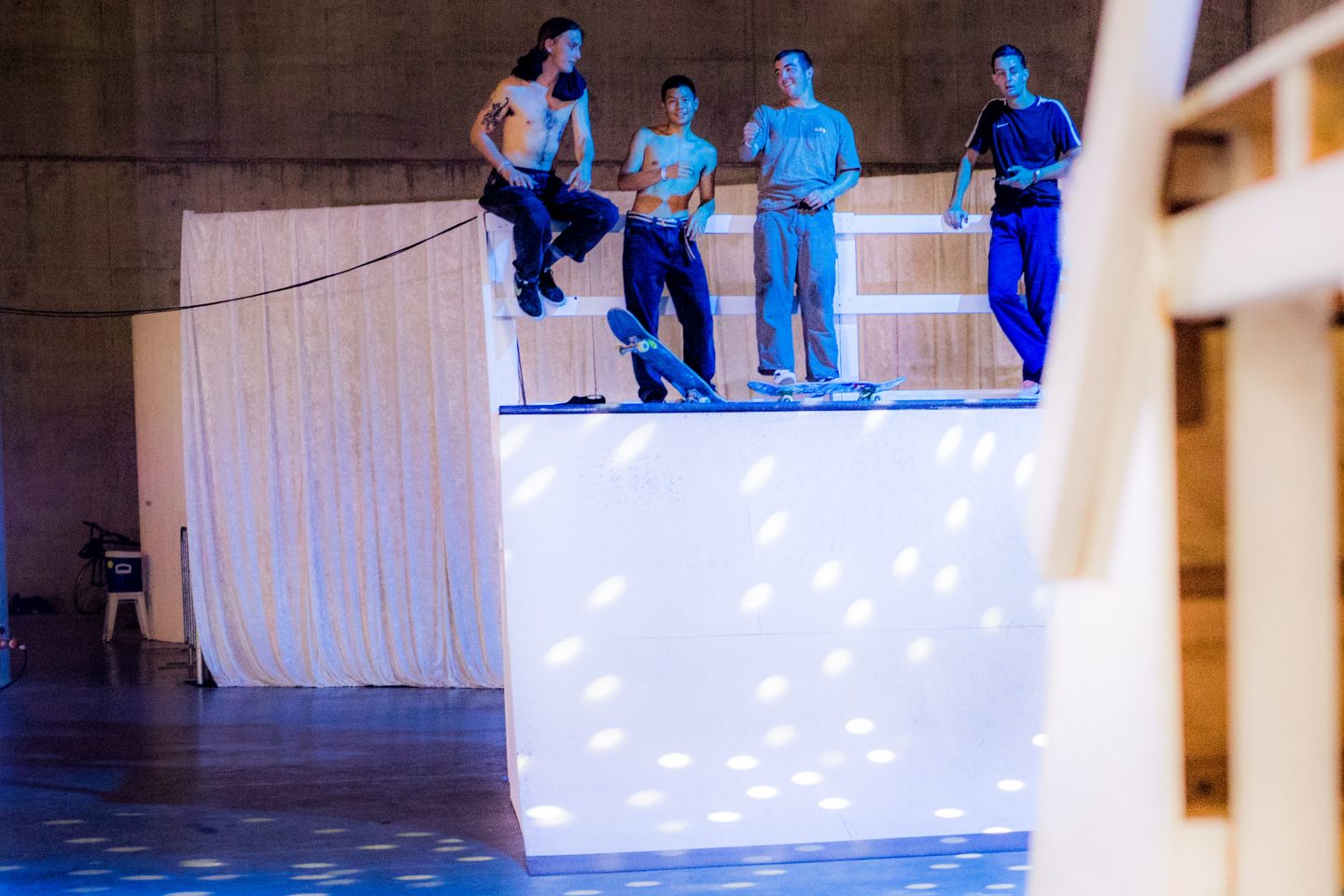 Skateboarders hang out at the half pipe at the Cutaway. Photo: Cameron Markin

If you are good at skating a bowl you’re looking at the curves which are the sweetest and most productive for the momentum you want to create, you are understanding geometry, your literacies are in your body. If you’re sketching or building something then it’s only a small leap to being really good at CAD drawing.

There’s a lot of cultural diplomacy between age groups going on at skateparks – there’s little kids who are on scooters or who aren’t so good on skateboards – but rarely there are incidents. That’s another type of intelligence. It doesn’t take much to build those kind of things into the pathways to high school, or for university or lifelong learning and we’re quite interested in doing that.

The future of SKATE

We’re looking at what is SKATE – it’s a work that’s made for performing arts venues, but at the same time it’s so many different things. At the Cutaway at Barangaroo it’s very participatory and it reaches out across Sydney and auditions all kind of skateboarders who might think like musicians who might want another opportunity of a full time or part time job that includes skateboarding and that’s got music and projection. 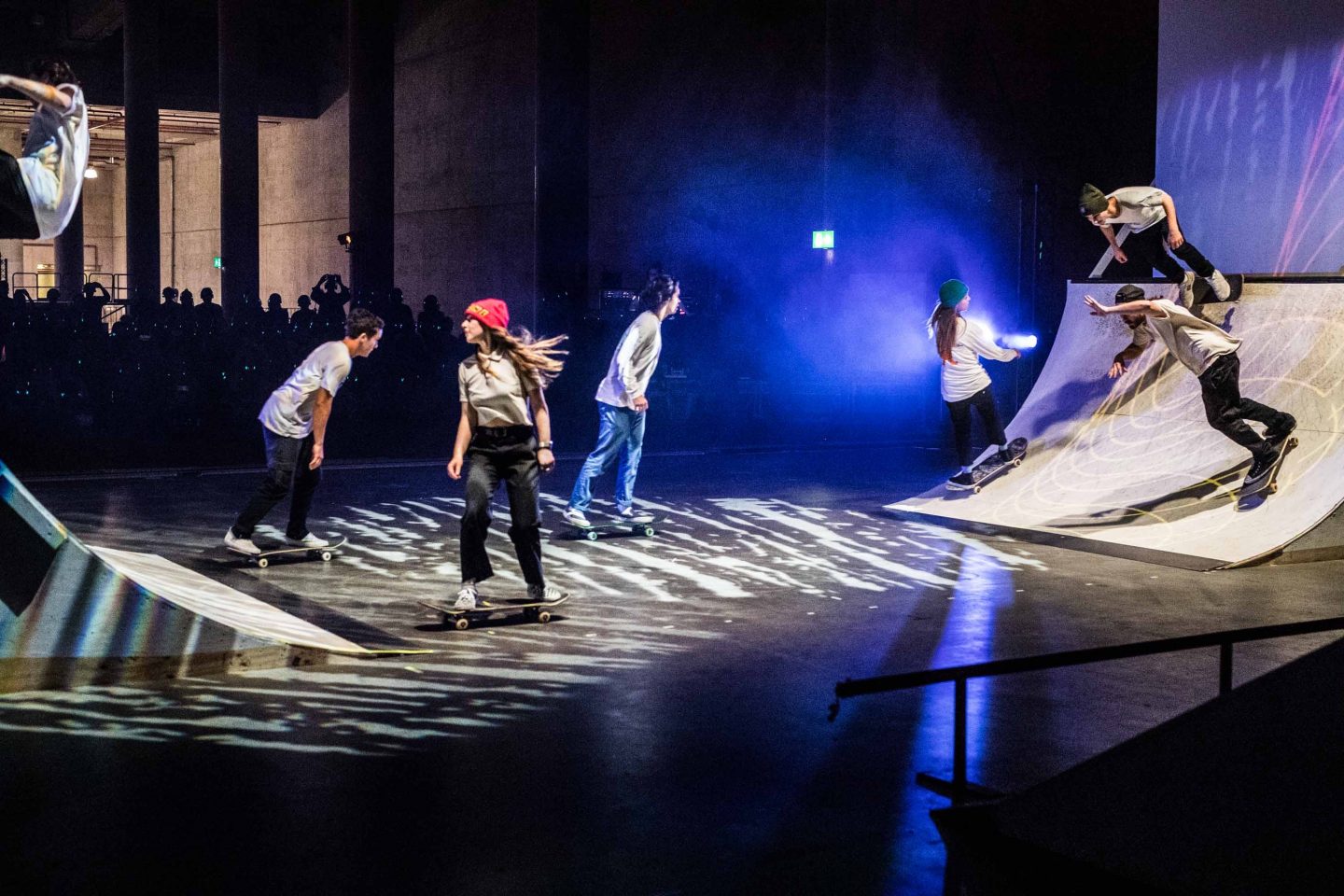 Skateboarders perform a scene from the developing SKATE show at the Cutaway. Photo: Cameron Markin

We’re interested in opening up the process, if the show’s a hit overseas and we have multiple companies, we’ll be auditioning ahead of ourselves in Brazil and China and we want to build a group of skateboarders of maybe 200 people. The hope for SKATE in practical terms is that it generates millions of dollars. Every cent of profit will go to battling disadvantage. We also hope it amplifies the way skateboarding is seen, and want to ensure it’s respectful to the culture of skateboarding.

They’re all young people contributing to this project that’s making a better world, they come from all parts of the world, working together across cultures and across genders.”

Scott Rankin is the Executive Director of SKATE and Artistic Director of Big hART. More about SKATE at: https://skate.bighart.org

Interview with Scott Rankin, written up by Bettina Richter.