The Sonic Playground of Zinc

A celebration of innovation, creativity and inclusion, Zinc was staged at Launceston’s Duck Reach Power Station and at Nyrstar Zinc Works in Hobart, drawing crowds of over 2300 people as part of Mona Foma in January 2021.

Today, meet the musicians behind the composition described by The Age as ‘an industrial symphony of intimidating beauty and power’.

“We were in a sonic playground. It was pure fun having such a unique palette of sound to create from -industrial machinery to rhythms made by conveyor belts and screeching wheels. It shook me from the comfort zone of my guitar and reminded me that music can be made from anything that produces vibration.”

Aaron Hopper is reflecting on the first time he visited the 100-year-old Nyrstar Zinc Works on the Derwent River, a largely secret world to most Tasmanians, although thousands have worked there over the years. 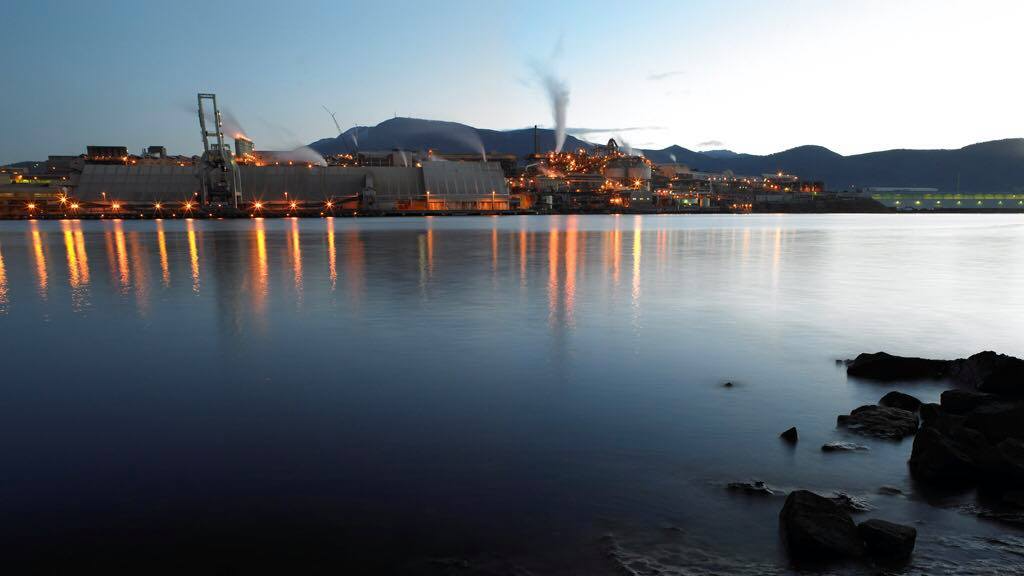 Aaron and musicians Paul Corfiatis and Curtis Poke had been commissioned by Big hART to create a new work in partnership with Nyrstar and North West Support Services. The challenge, to create a score made purely from the sounds of the zinc works. 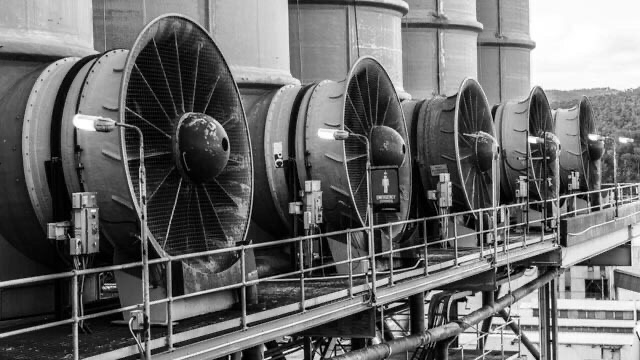 Back in North West Tasmania, Paul Corfiatis and Aaron Hopper, a jazz-trained professional guitarist began composing the work together.

“Paul has a background in trance and electronic music production, and I’m influenced by minimalists like Philip Glass and John Cage and any improvised music.”

“We began to look for sounds that could become melodic or rhythmic material, and then we turned them into samples to manipulate”, says Aaron. 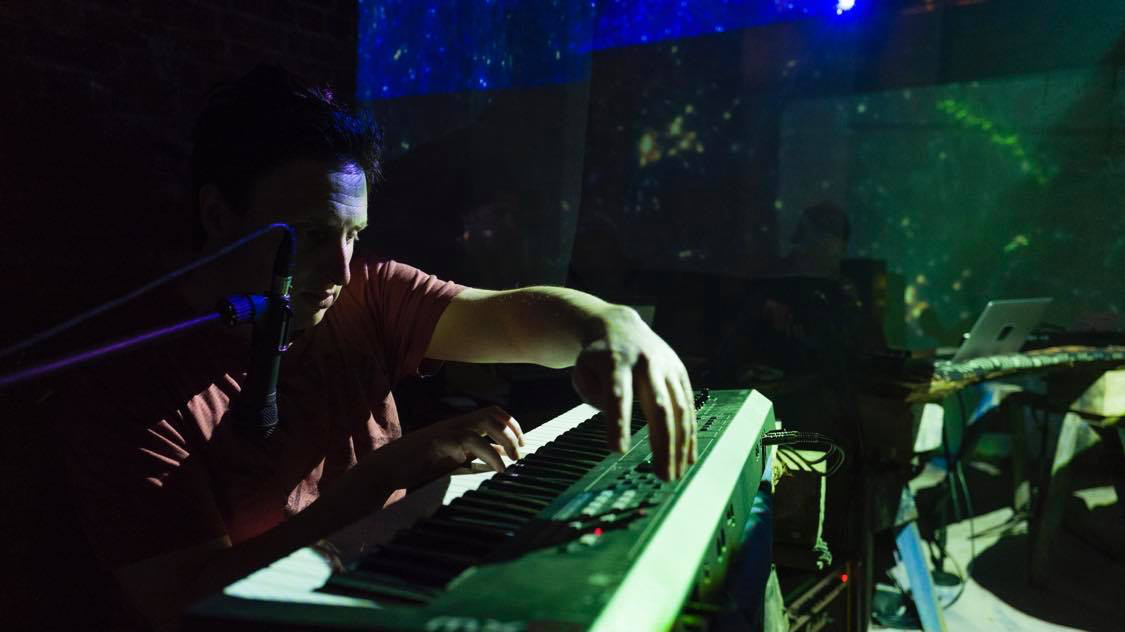 Paul Corfiatis has always been interested in experimenting with sound. As a child, he would manipulate cassette tapes, recording his voice on a boombox with background sound. He has gone on to create video soundtracks for the Doom video game, psychedelic trance music and has worked on a number of Big hART projects over the years, encouraged by Scott Rankin, the CEO of Big hART and also the Director of Zinc.

“Scott has pushed me to crazy limits over the years, impossible remixes, skateboard songs”. He adds jokingly “I would not be surprised if I was forced into gathering 100 people into a huge room and make them sleep and record their snoring all at once, but Zinc is definitely my favourite.” 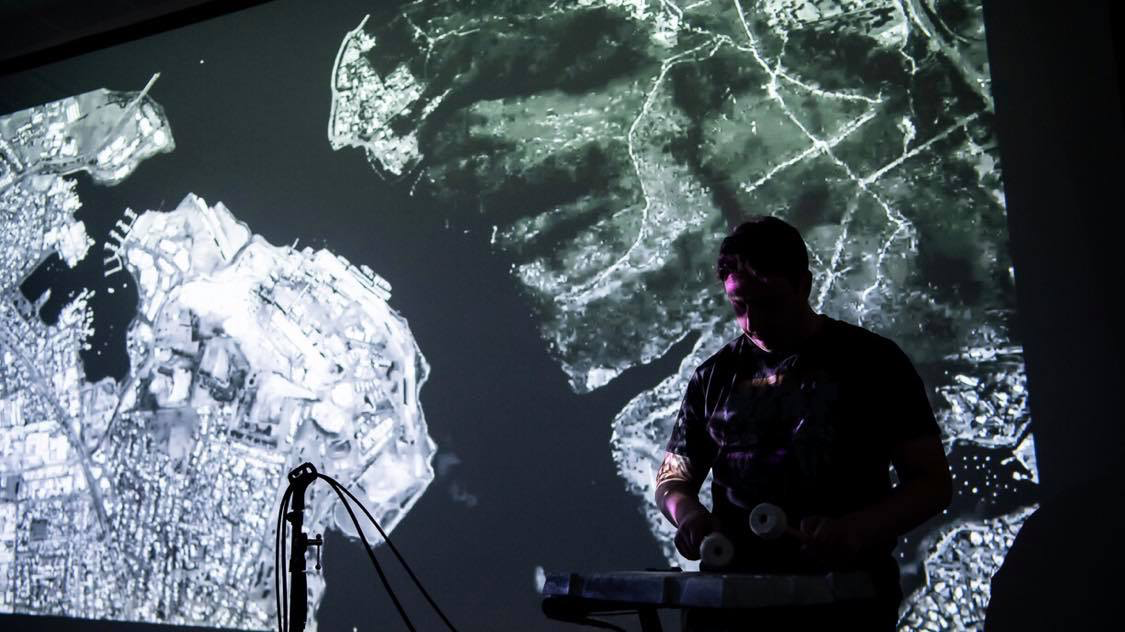 “I was able to create a lot of stuff from scratch by modifying the sounds of the zinc works” says Paul.

“All of the tracks featured only sounds from the smelter – auto-tuned, stretched or squashed to create something so unique you’d think it would be from a synthesizer.”

“Paul is a whiz at producing, he’s prolific”, says Aaron. “I might come up with two tracks and he’ll come up with seven. I’ve learnt a lot from watching him, he’s also a really sharp set of ears.” 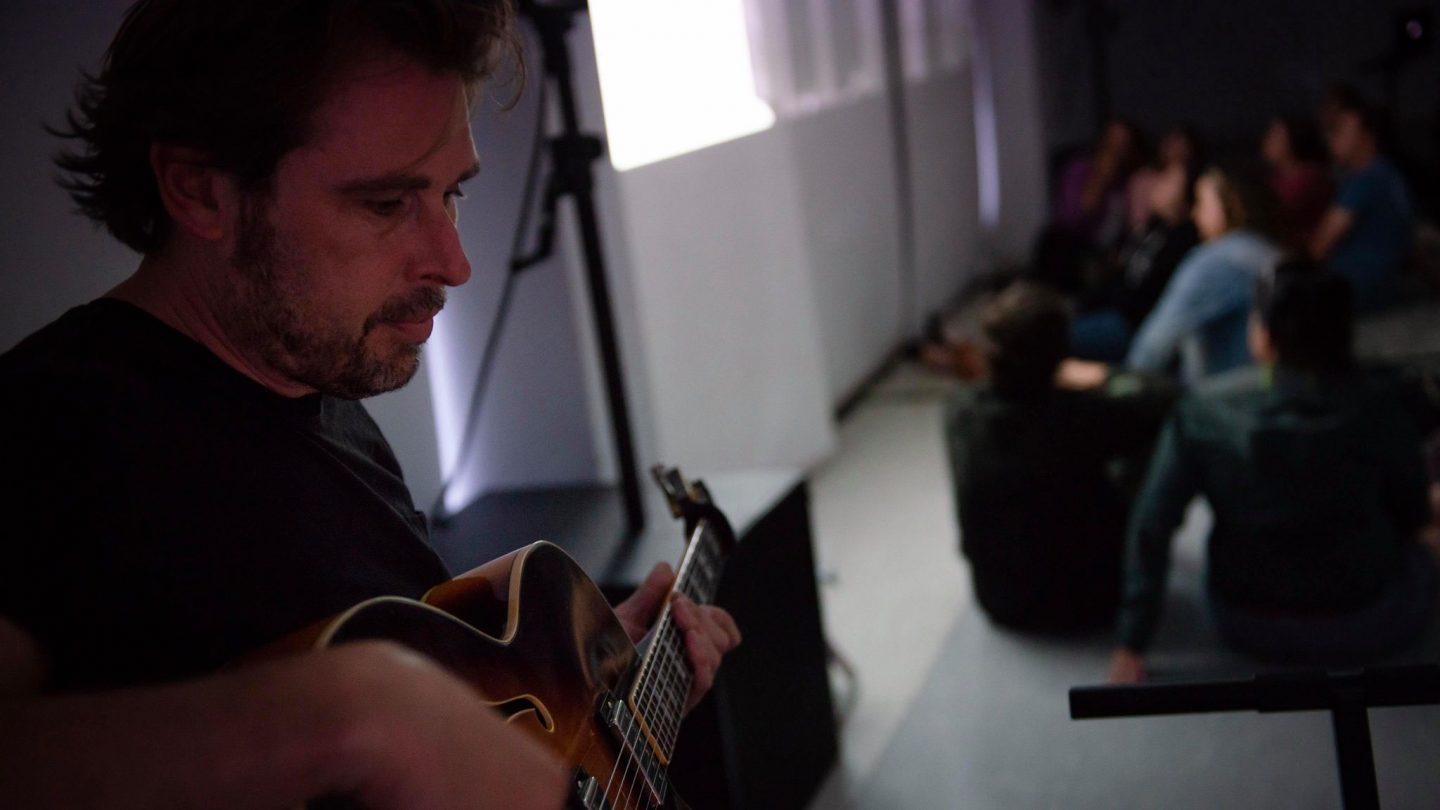 It was an unusual marriage of artistic sensibilities, but also life experiences. Paul and Curtis’s artistic aspirations are supported through the work of leading disability provider North West Support Services, an integral partner of the project.

Whilst the composition was coming together Aaron and Curtis Poke went into the studio and began experimenting with using zinc ingots as part of the work. 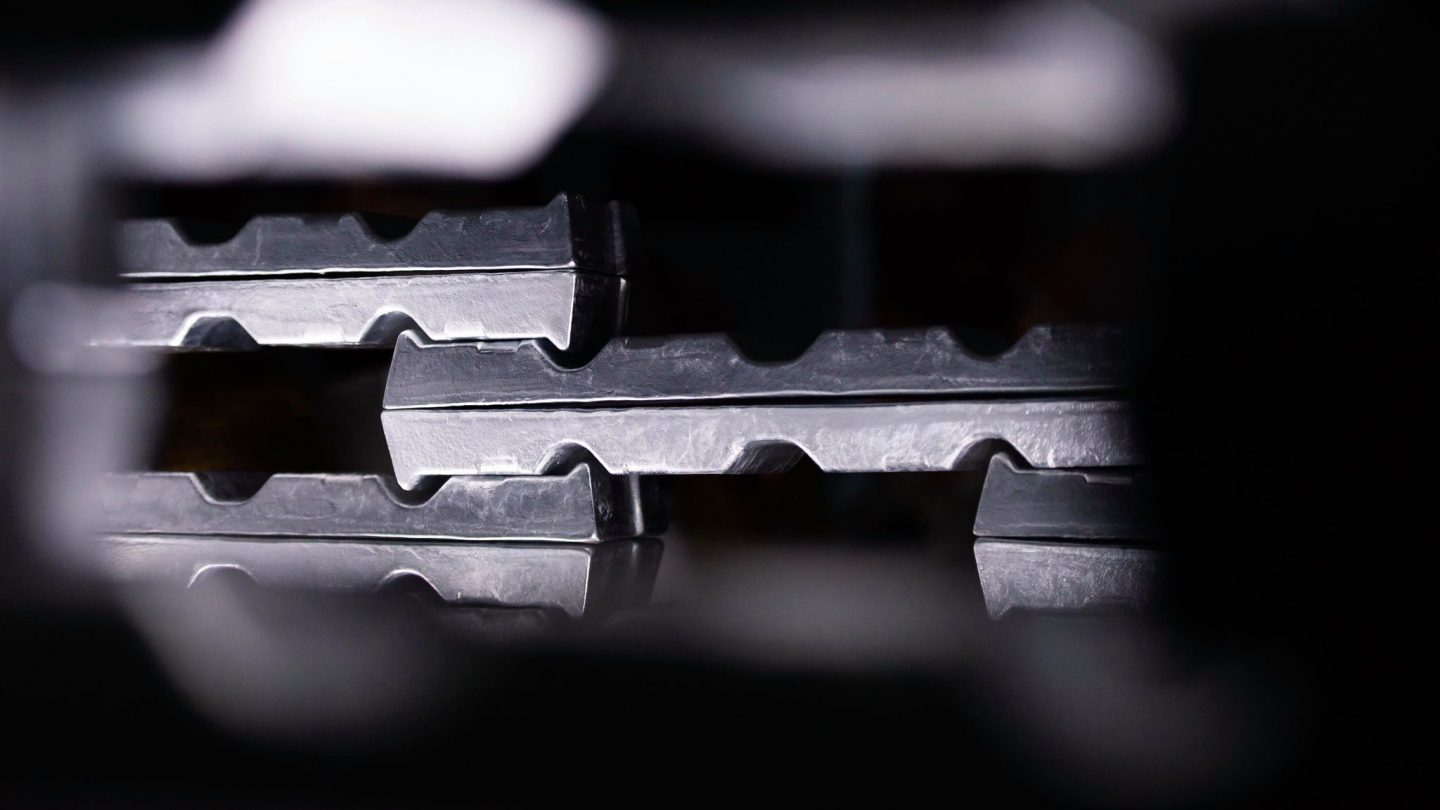 “The zinc ingot sound is completely different to any percussion instrument I’ve ever heard”, says Aaron.

“You can create a zinc piano or a zinc xylophone or glockenspiel, but they also lend themselves to a percussive approach. Sometimes we played the zinc ingots with taiko mallets and sometimes with our hands. The sounds of fingernails, screwdrivers and pencils on the zinc was really interesting. It was totally unorthodox.” 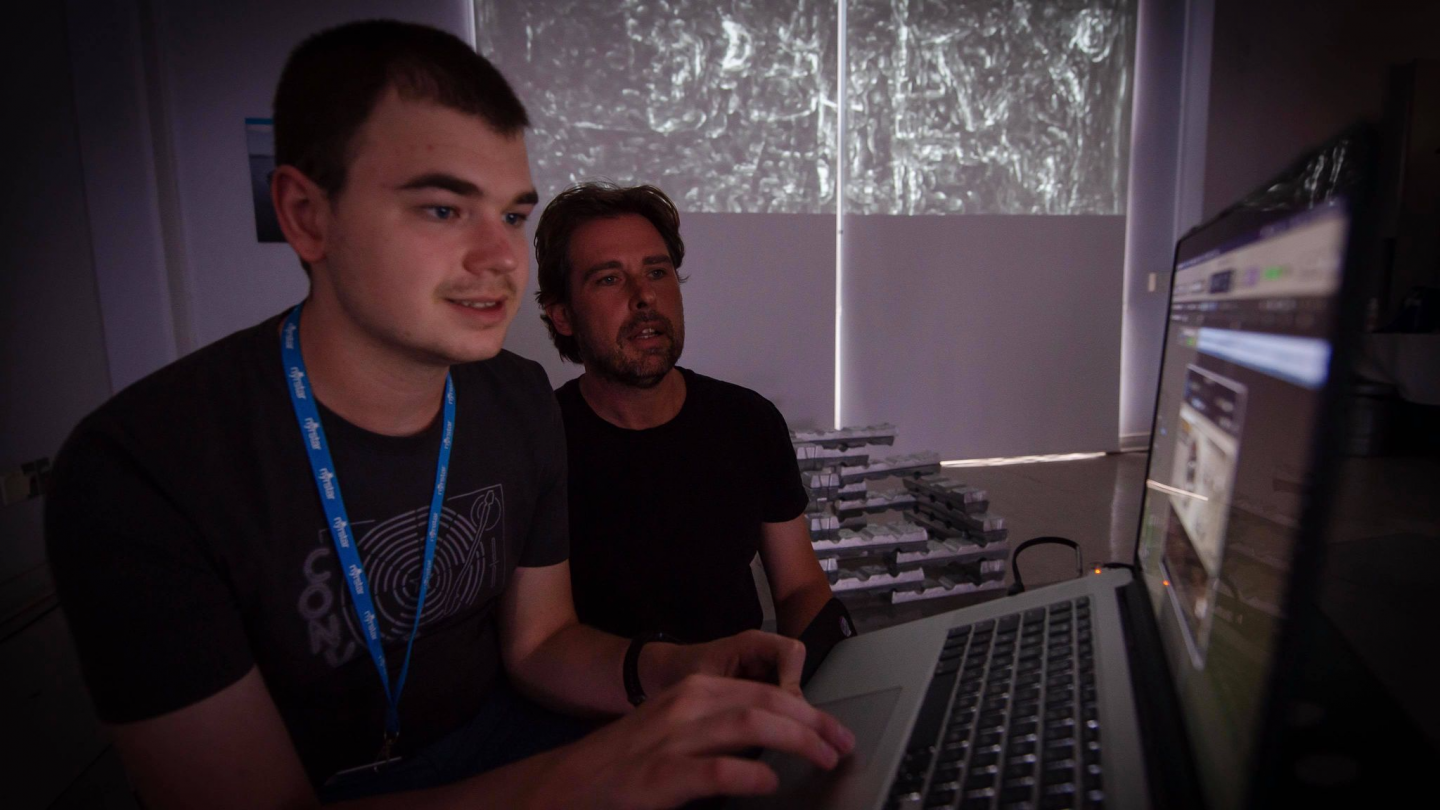 Curtis Poke and Aaron Hopper working on the music together. Photo: Anna Cadden

“Music makes me happy and proud. My favourite music is jazz but I really like all music”, says Curtis.

“It’s fun working with Aaron, I like learning new songs.”

“Curtis Poke is a great bass player, he’s very open to new things” says Aaron. “One of the joys of this year for me is being onstage with Curtis and Paul and realising that we’re creating something that we really couldn’t have imagined we’d be part of.” 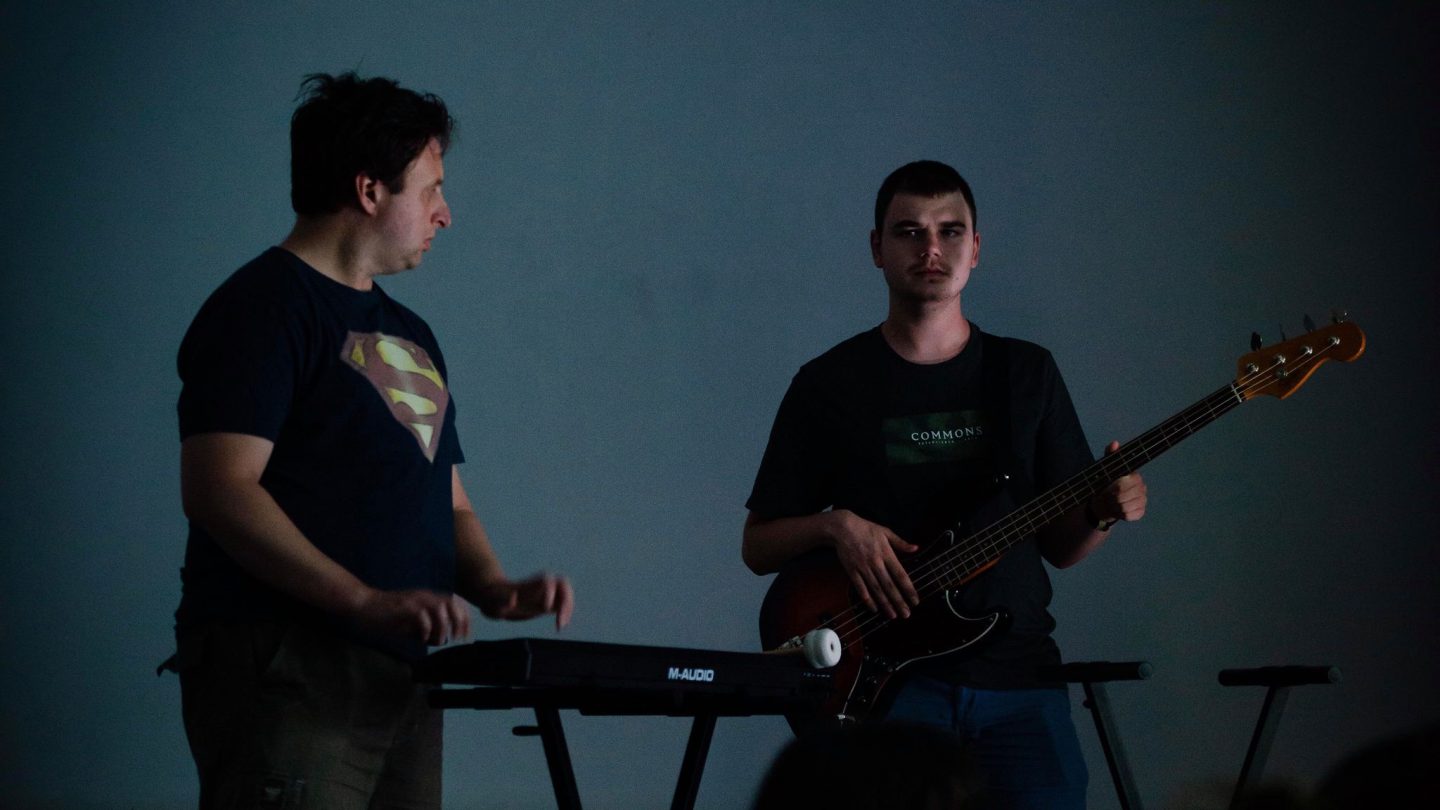 A creative development onsite at Nyrstar was also integral to the process. Whilst the musicians were developing the music elements of the project, the visual elements were being created by celebrated cinematographer Anna Cadden, innovating emerging young Sydney media artist Jordan East, and Hobart Artist Eddie James.

“They were really incredibly textural and detailed visuals” says Aaron. “They really changed the way I heard the music. We then worked to ensure the music interacted with every aspect of the visuals, highlighting the detail.” 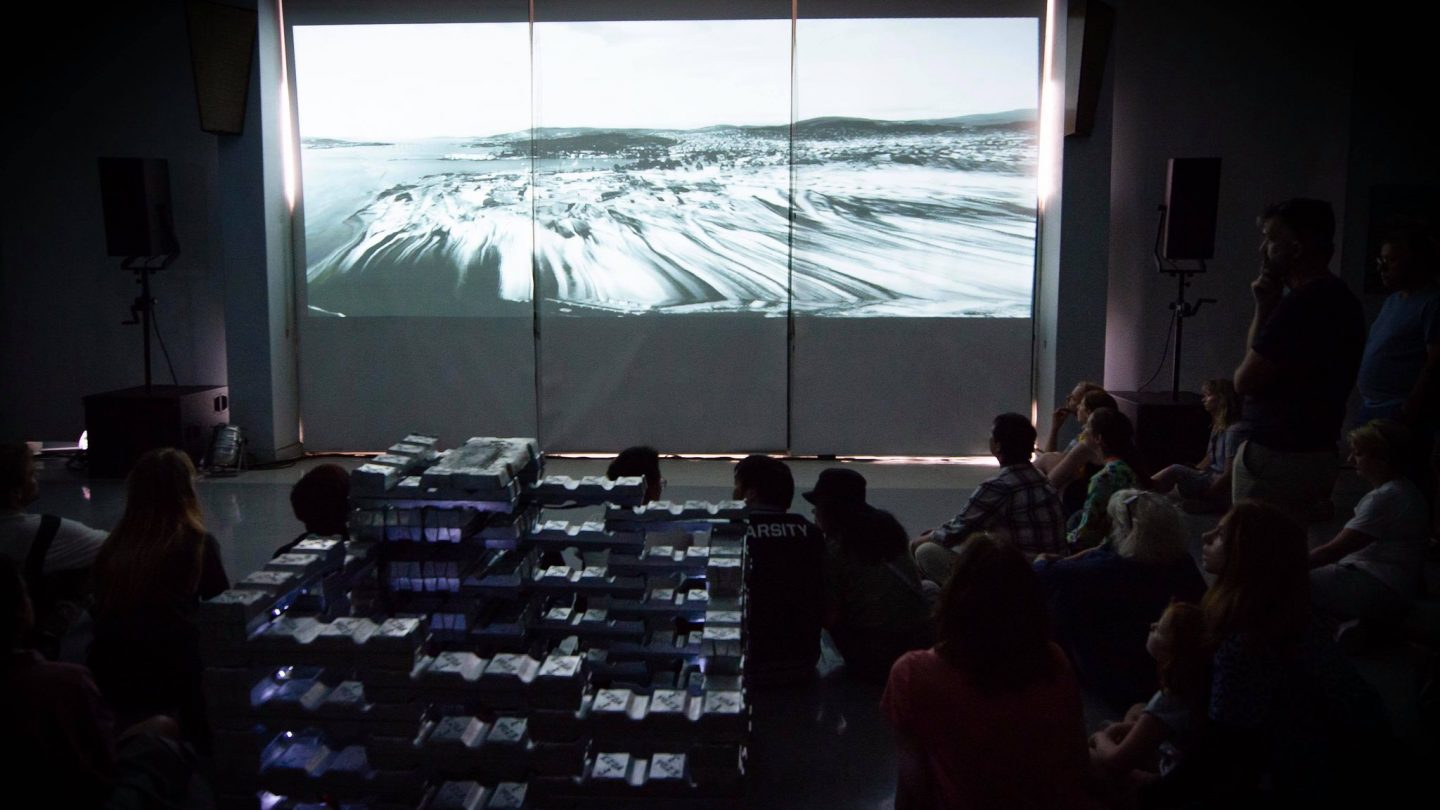 Showing the work to Nyrstar workers before the performance was also really important to the work. Aaron says that the response from staff was quite overwhelming, some felt really emotional and moved by it.

“It’s the world they operate in daily. We had to do justice to all the people who’ve worked there over the years, it was really important we did that.” 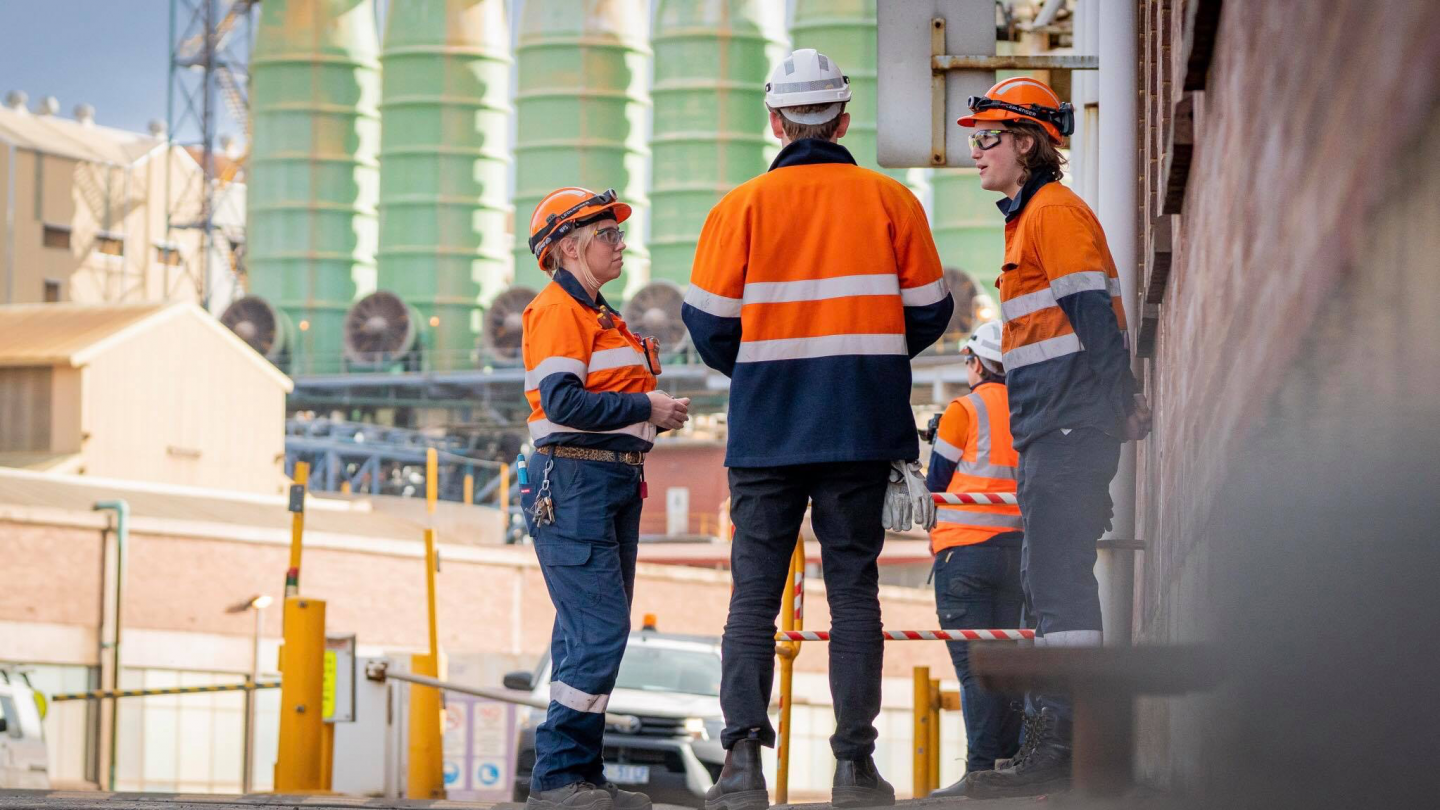 “I think workers witnessed the detail of the environment that they inhabit every day through new eyes and ears. Visually and sonically, there’s real beauty and power in Hobart’s Nyrstar plant happening every second of the day and it was our job as musical and visual artists to illuminate that” says Aaron.

In Launceston Zinc was an installation at the old Hydro power station – audiences entered the old building and were surrounded in an audio-visual experience. 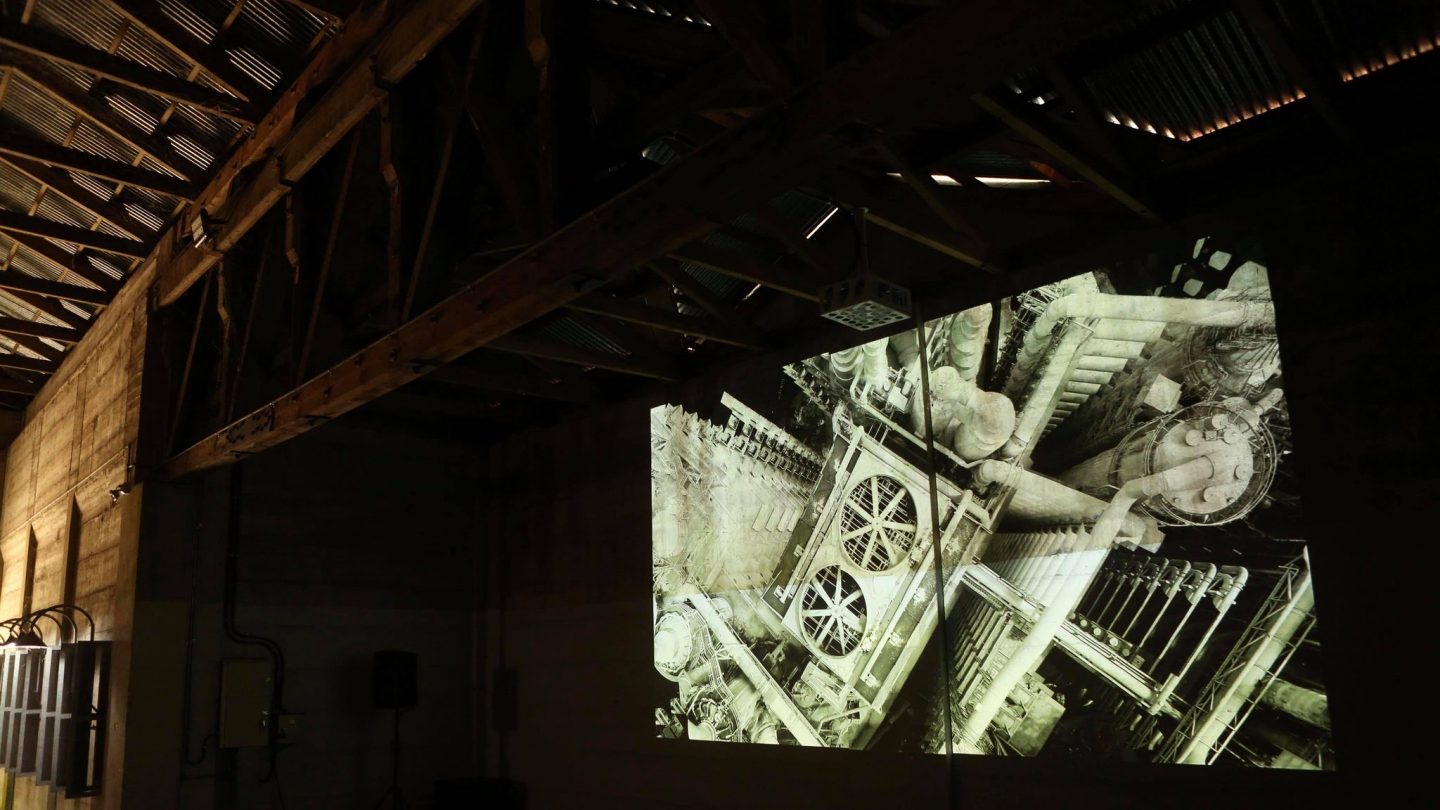 In Hobart the musicians performed live with the work. Audiences queued in their hundreds, the attraction not only the ingenuity of the work, but also the opportunity to walk into the grounds of the smelter, which had been a part of the Hobart skyline for so many generations.

“Most audience members had not had a chance to come in before, or may have come through earlier in their lives for a school trip. It’s a place with such history that engenders curiosity in those who know of it.” says Aaron. 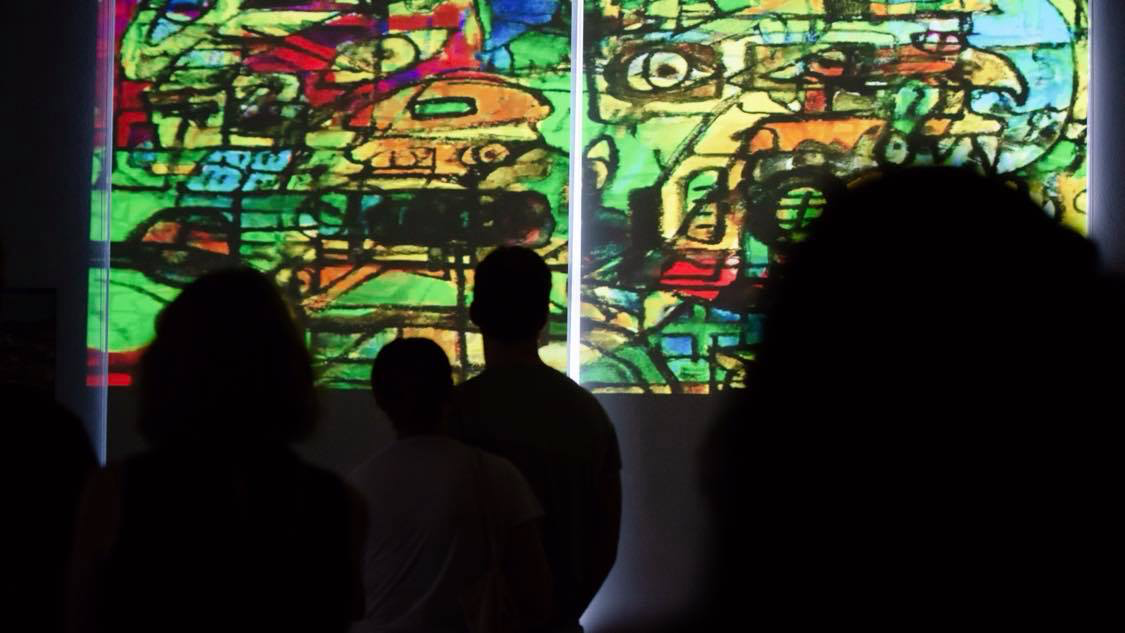 “The most enjoyable thing was playing our composition live” says Paul Corfiatis. “Especially the challenge of making live percussive sounds on blocks of zinc.”

For Curtis also, the opportunity to perform the work live was the biggest highlight of the experience. “What I enjoyed most about Zinc was going to Hobart with Aaron and Neal and playing with the drum sticks on zinc” says Curtis. 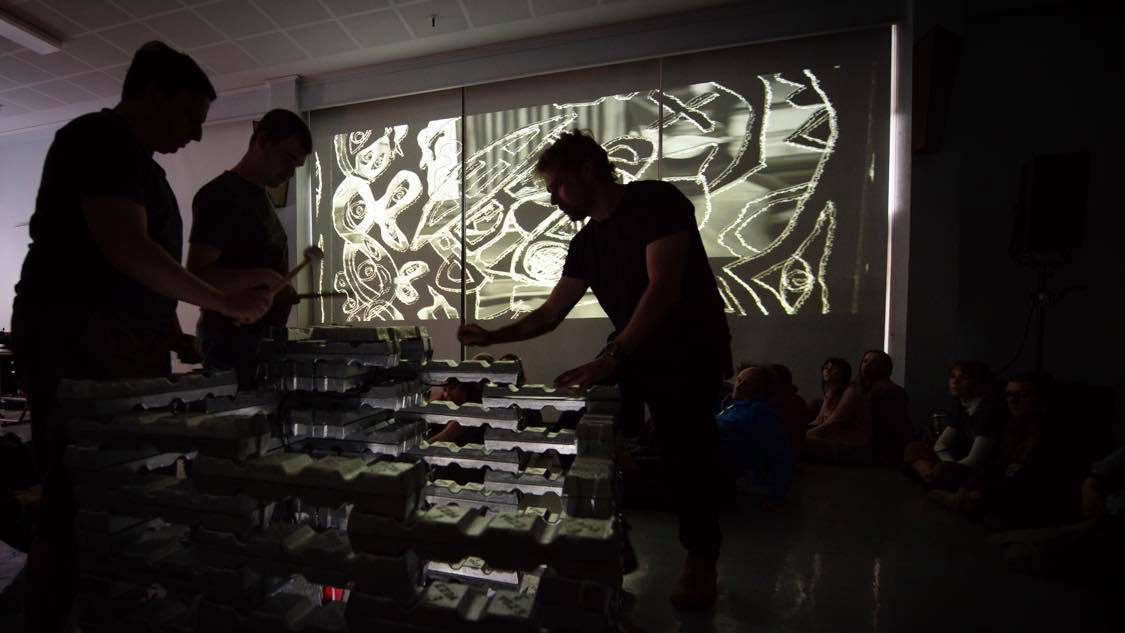 Aaron explains the experience for audiences of Zinc was both visually and sonically arresting, from minute detail to massive detail, from a whisper to a roar, from beauty to abstract chaos. They also worked to create a work which was a welcome into the world of the smelter.

“This has been a challenging project totally out of my comfort zone”, says Paul. “When I was younger I was super nervous, but now I totally thrive on these opportunities.” 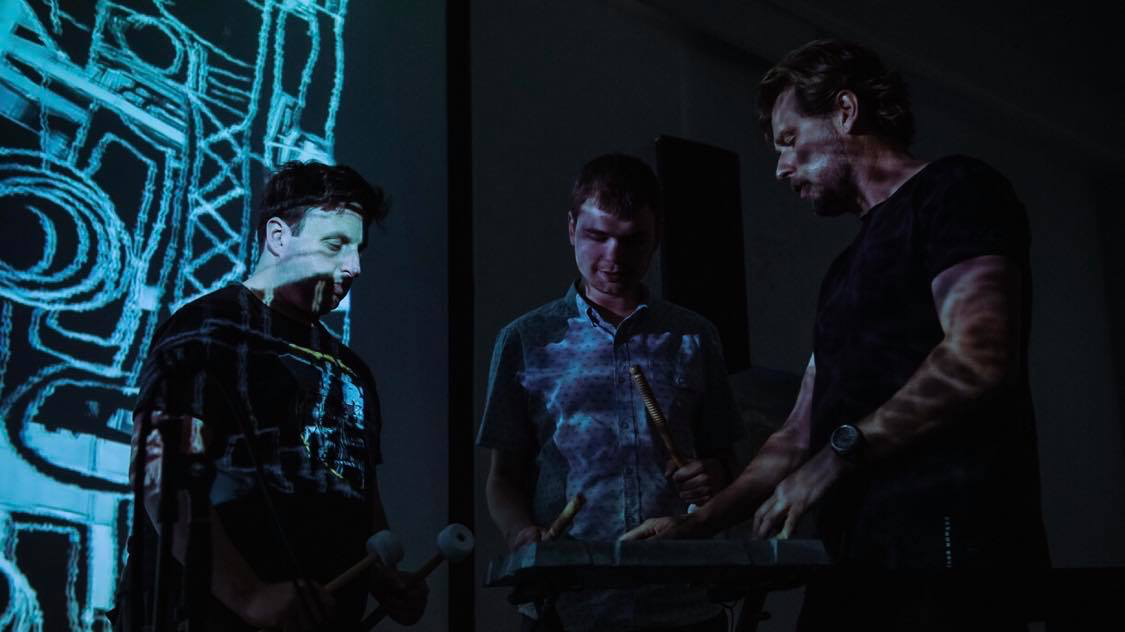 Aaron Hopper says that working with Paul and Curtis on Zinc has been one of the highlights of his career. Photo: Amy Brown

“People like Curtis and Paul have such a unique way of experiencing the world” says Aaron.

“Experiencing their rich inner imaginative world has been a privilege.”

Zinc is a new work by Big hART which was presented at Mona Foma and proudly supported by Nyrstar and North West Support Services. Big hART are now looking to tour the project nationally.