On the International Day of Peace, a community gathered under the stars on Ngarluma country in song, peace, pride and harmony. Songs for Peace 2019 was an unforgettable evening which celebrated the women who build, support and strengthen the community. We caught up with Indigenous artists Naomi Pigram and Theona Councillor and cultural advisor Michelle Adams to hear how this burgeoning event is bringing healing and renewal to Roebourne. 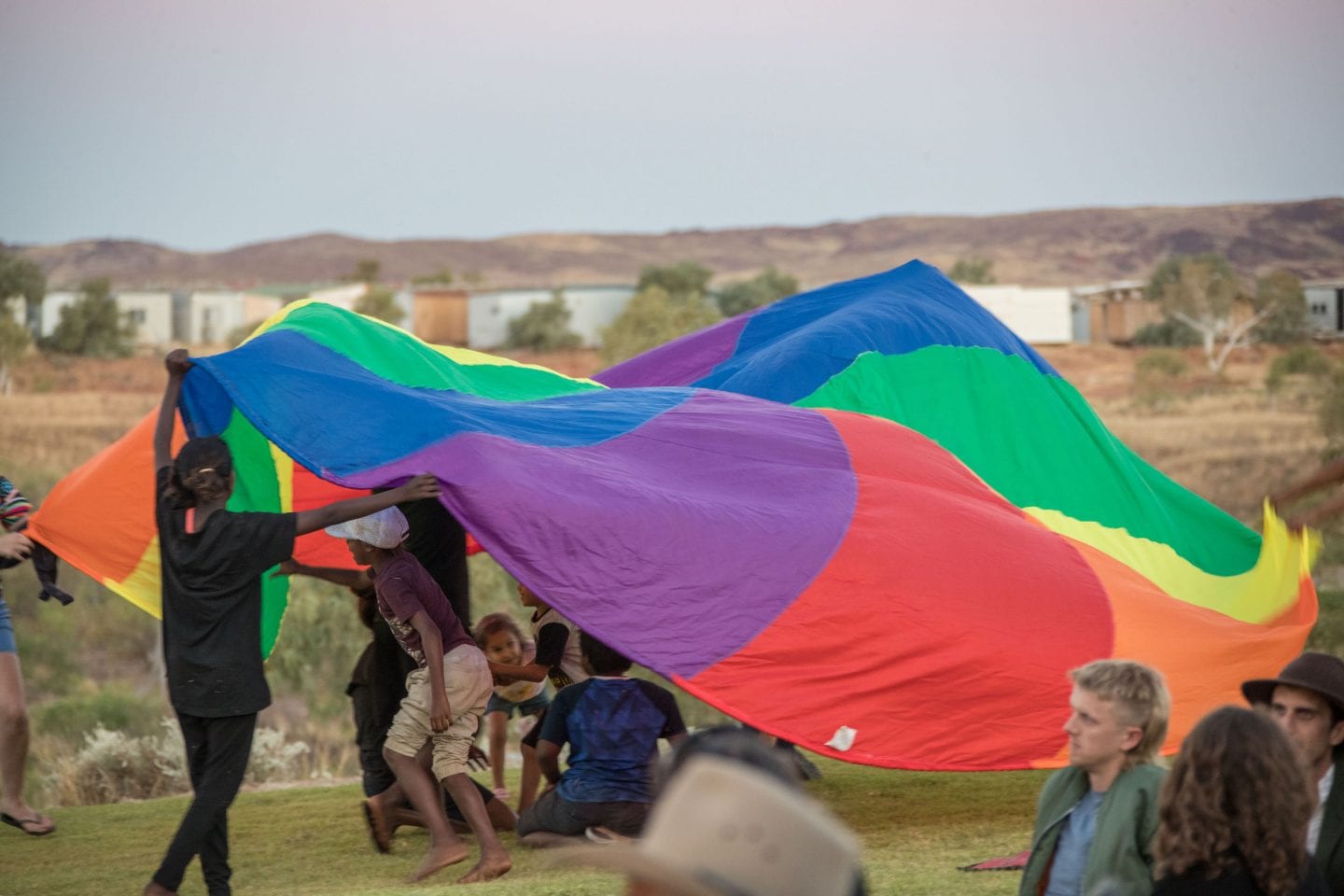 If you had stopped by the Ngurin Cultural Centre in Yirramagadu (Roebourne) during Songs for Peace you would have experienced a community transformed. A fire burning at sunset with people gathered around eating, talking, laughing and singing… children playing on the lawns in the dusk. Young people engaged in digital illustration & recording workshops, artists rehearsing, community members composing songs with guitars and voices lifted high into the night. Roebourne was glowing.

Songs for Peace is an annual celebration of music, pride, peace and harmony presented by the Roebourne community in partnership with Big hART which began in 2018. This year’s event was held on the International Day of Peace – Saturday 21st September – and involved 51 young people, 59 workshops, 23 artists and 7 shared community dinners. 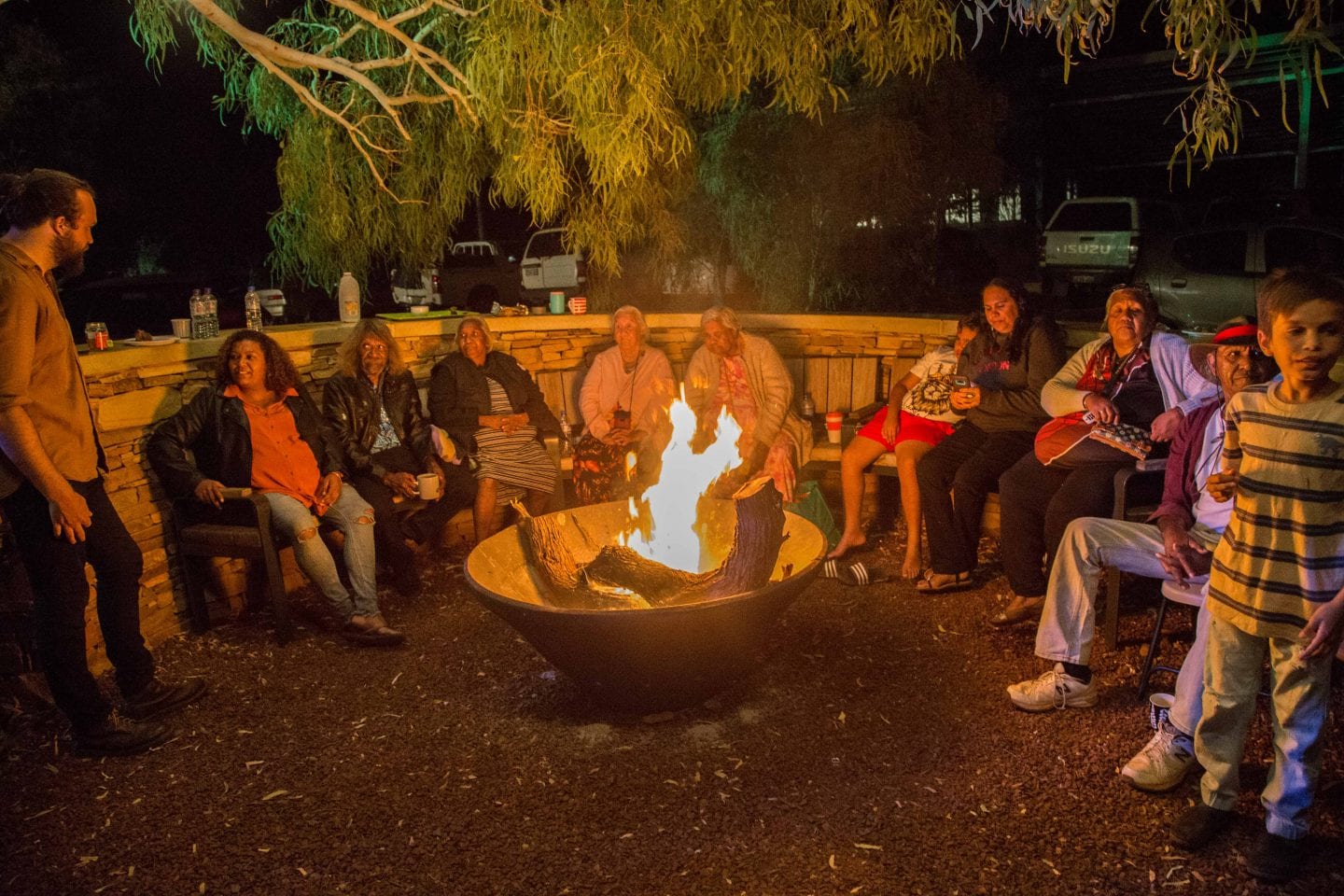 Yindjibarndi woman and cultural advisor Michelle Adams was born and bred in Roebourne. Reflecting on this year’s event she said, “It was transformational, I couldn’t stop smiling, it was very joyous. I actually thought you could see guild management taking place in front of you – the musicianship, listening and being part of the workshops, the organisation around dinner, making sure everyone was fed, it was a very nurturing process.”

Yawuru and Wadjarri singer-songwriter Naomi Pigram of the famed Pigram music dynasty travelled across from Broome to be part of the event. “It was really a calm experience, powerful is the word I use because of the local people”, says Naomi. “Songs that were shared there that night were about Indigenous themes, about our reality – about grief, or struggle, or love. That whole concert and every single one of those songs were peaceful in that it provided family an opportunity to heal through hearing that story.” 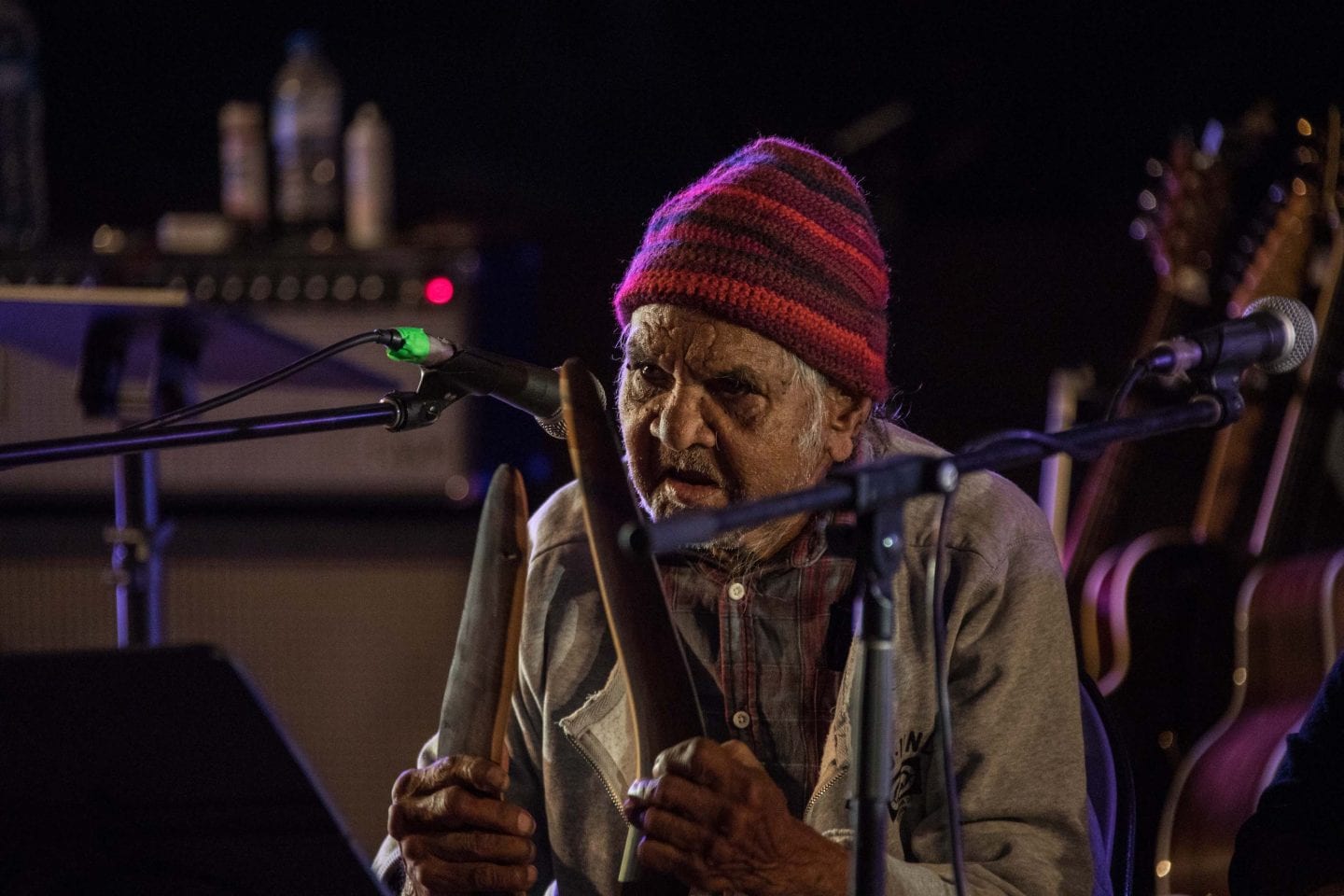 Women at the Helm

This year’s event had a special focus on celebrating women. There were 15 women onstage at Songs for Peace, with leading Indigenous Artists Emma Donovan, Theona Councillor and Naomi Pigram at the helm. Women Elders wrote songs and performed, there were 15 paintings by women artists showcased in an exhibition, young women aged 10-16 years old performed, MC-ed and helped backstage, and behind-the-scenes women advised, cooked, organised, supported and steered the event. “Women have to manage conflict and relationships in Roebourne” says Michelle Adams. “A lot of women sit on boards, a lot of women hold important positions in Roebourne. That goes across into relationships in Karratha, and in mining companies and in government, and Songs for Peace offers a way of bringing people together in a non-political way which is so important for a town like Roebourne.” 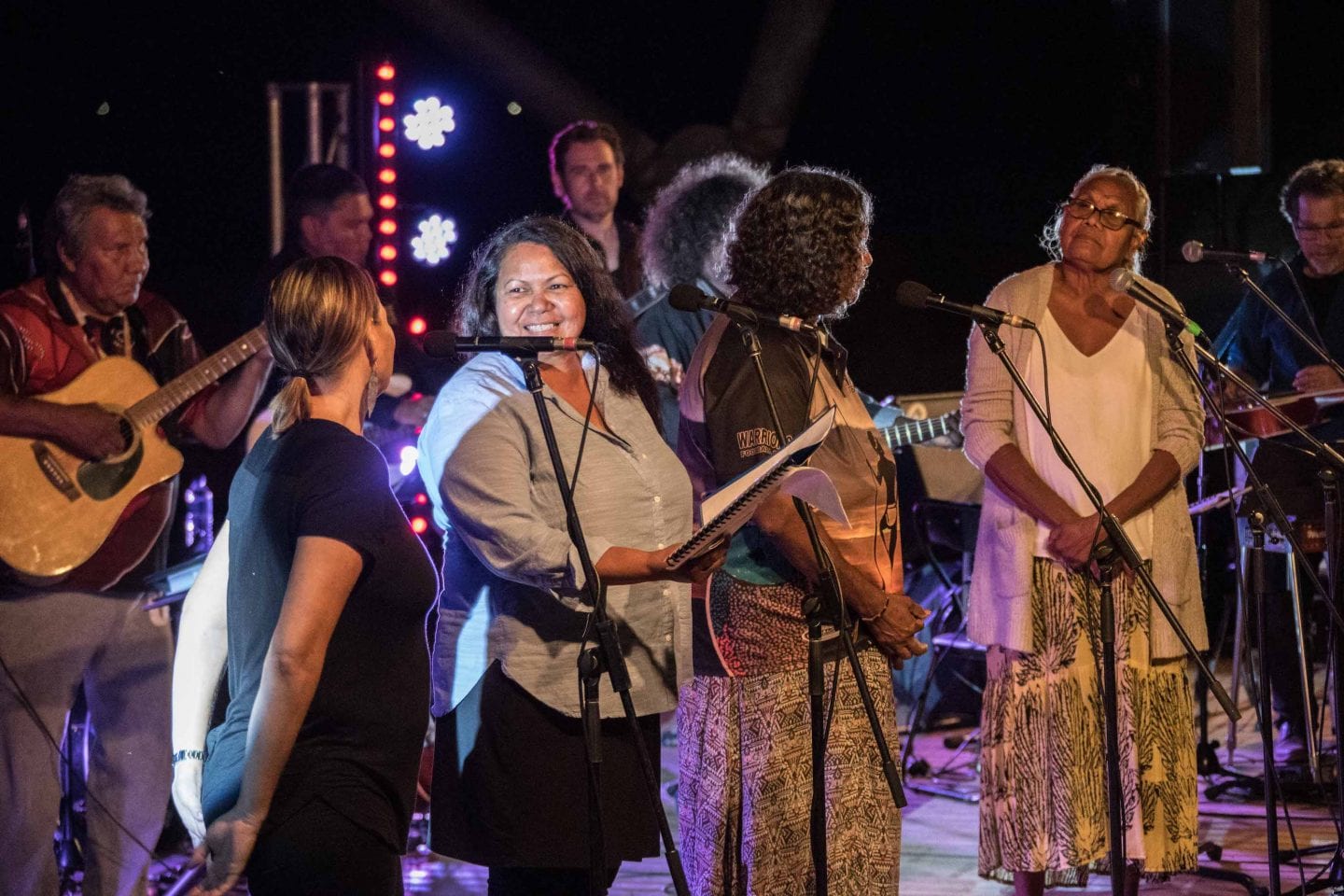 Renowned country artist Theona Councillor talks of the importance of women in Aboriginal culture, “Women are the home, women are the storytellers. Men have their spot, I would never ever take away their spot, but the women’s role is to be highlighted as well, and appreciated.”  A Naaguja woman, who grew up in Hedland and around the Pilbara who is now based in Geraldton, Theona returned to the Pilbara just for Songs for Peace, “To be able to focus on women there in Roebourne, it was deadly, to be recognised and to recognise the women and what they have done for the community.” 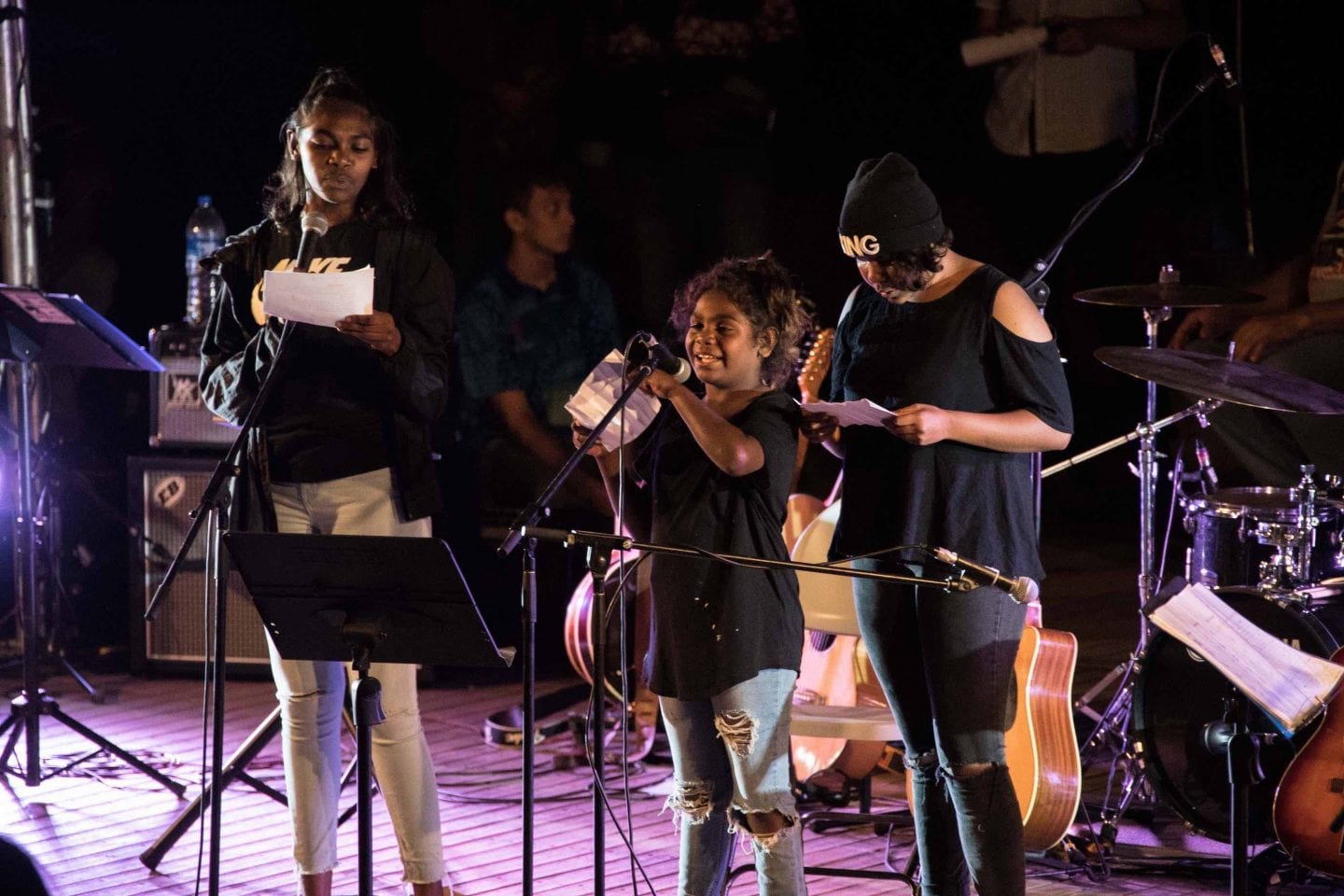 “All Aboriginal families are intergenerational. They’ll have the whole family there, the whole family that will do things, not just the young and the old, everybody has their place” said Theona Councillor. At Songs for Peace all generations were present, with intercultural learning, the sharing of songs and stories and transmission of culture from one generation to the next, which also reflects the way Big hART works in Roebourne, guided by Aboriginal Cultural Advisors. 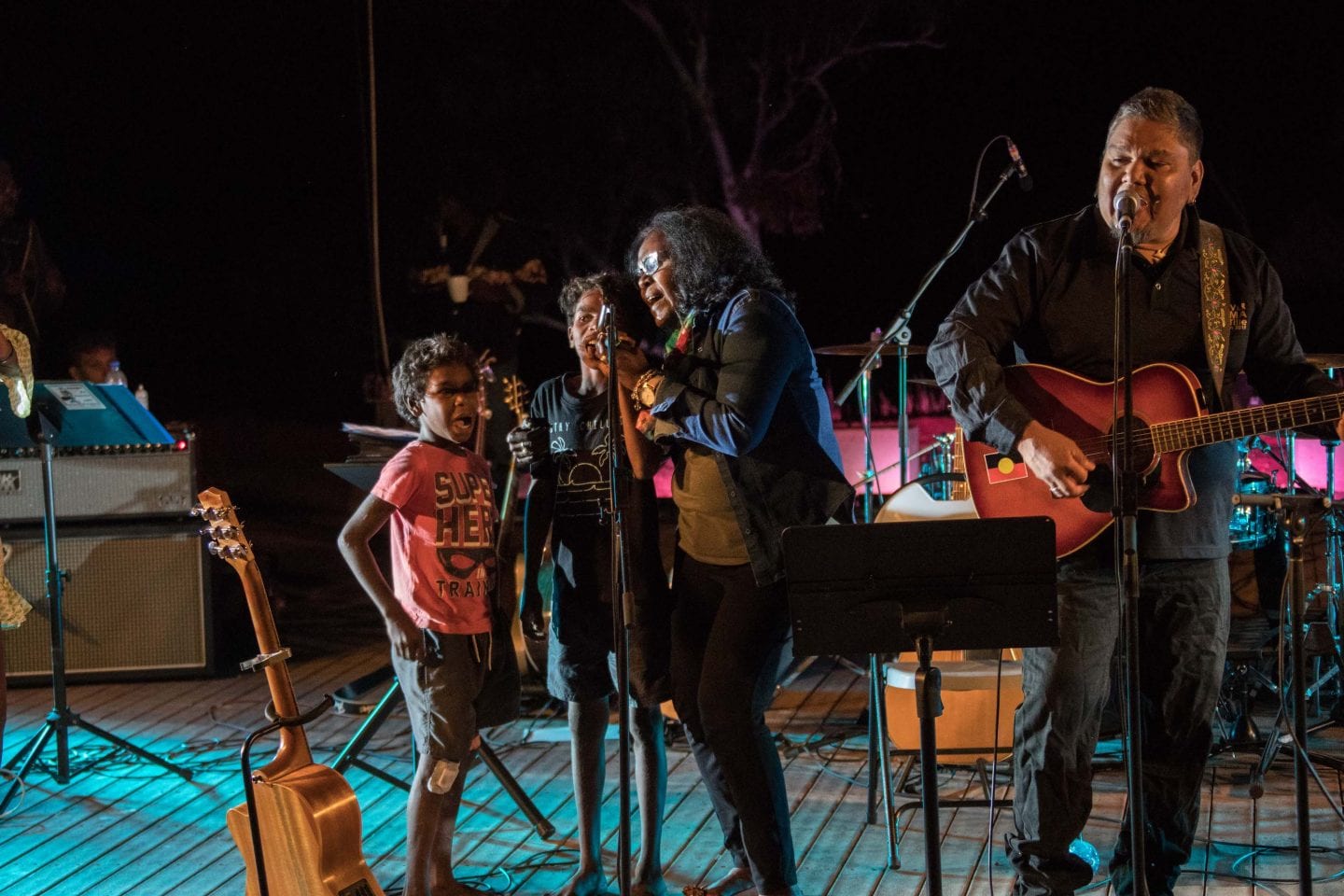 “When Aunty Wendy comes in and sees Bianca and they’re doing digital media workshops, and Bianca is taking photos of her grandmother, that’s a positive reinforcement of a grandmother granddaughter relationship”, says Michelle Adams. “It’s that developing education, engaging with media in a natural way, where they get to tell what story about who they are as people. That’s the cultural education bit, that we are lucky to see as part of this work.”

Naomi Pigram sees the intergenerational learning evidenced through traditional roles and relationships, “It’s our job to nurture, and guide our kids, having that importance there at Songs for Peace…those older women guided us.” 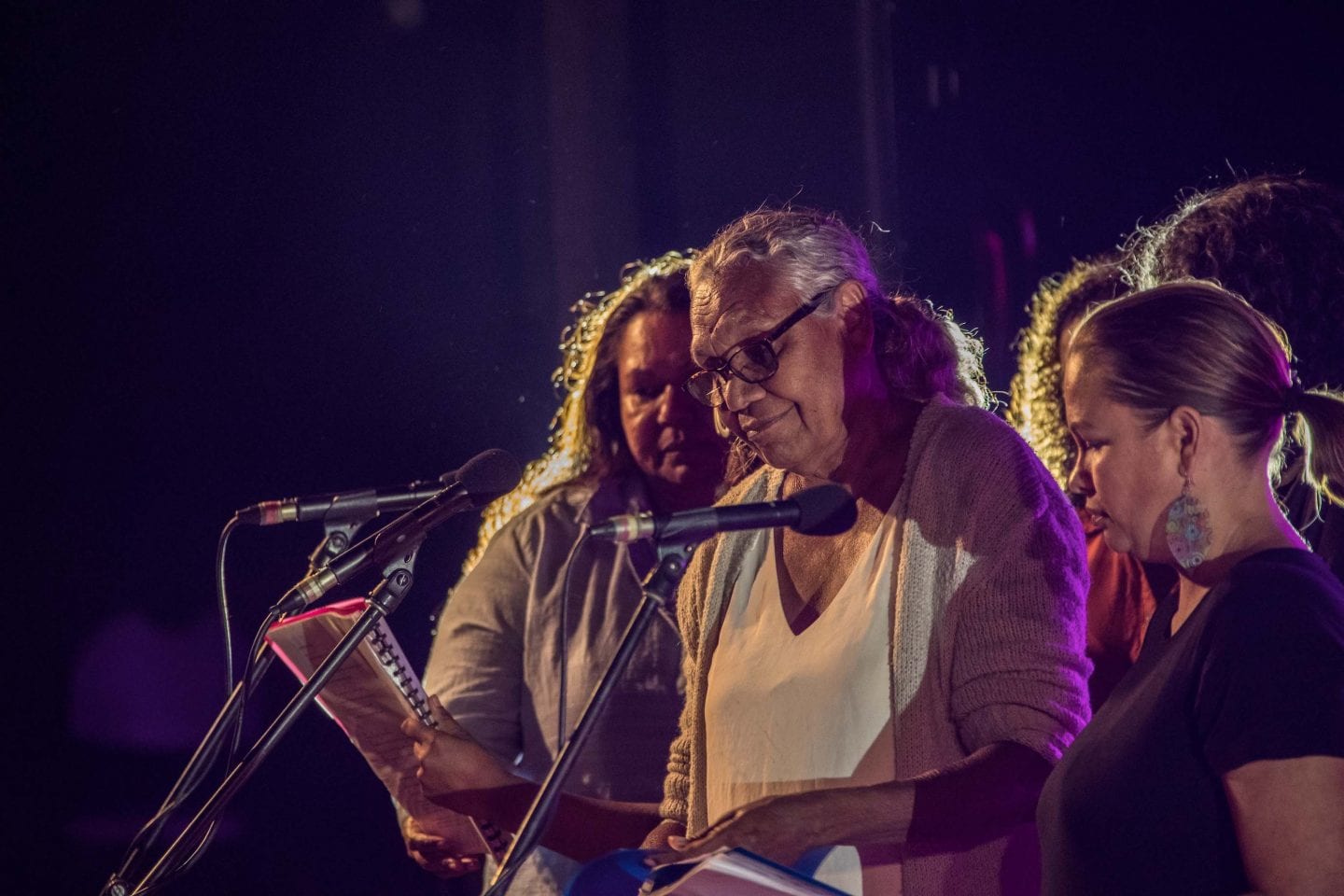 Songwriting in the Women’s Prison

This year as well as male artists running music and songwriting workshops with male inmates at Roebourne Regional Prison, women artists also visited the prison and worked with female inmates during Songs for Peace. It’s clear that the impact of meeting and connecting with female inmates will stay with Theona Councillor and Naomi Pigram for a long time to come. “As a singer songwriter but also as a mother and a grandmother, whether it’s female or male I just know that a high percentage of those people sitting in those jails are Aboriginal” says Theona Councillor. “In my mind I want people to know that they are still needed. When they come out they are still mothers, they’re still fathers, they still belong to a family.”

“I think also because it’s Indigenous focused it’s important to have black artists”, said Naomi Pigram. “When you go into an institution like that it’s really hard if you don’t have the family connection, there’s that way about us that straight away when we meet someone we connect straight away because it’s by relation.”

Naomi Pigram said that it cemented in her the power of music to be able to heal people, “We connected in there, they shared their stories, we shared a little of ourselves. Then we started to write this amazing song, and when I walked out of the prison I thought how ironic it is to write songs about freedom in prison.” 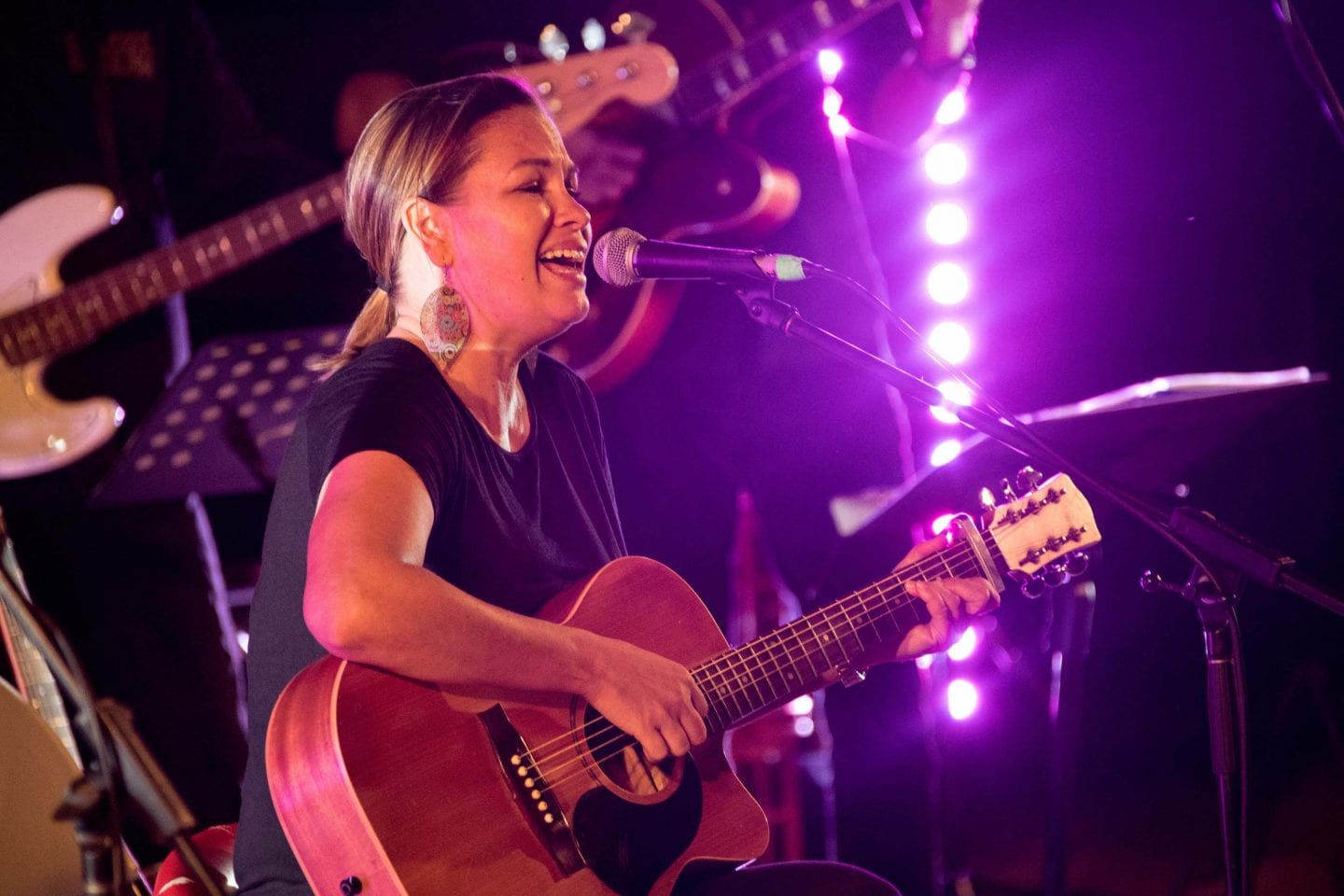 It is hoped that Songs for Peace in Roebourne will continue long into the future and be a celebration for generations to come. For local Yindjibarndi woman Michelle Adams, she is already looking ahead and considering the possibilities and opportunities for growth in her community. “For me the future for Songs for Peace is very educational. It allows language development, skill development, spoken word, and a place where language can flourish too”, Michelle says. “We’ve created the impulse for that to happen, it must become its own force.” 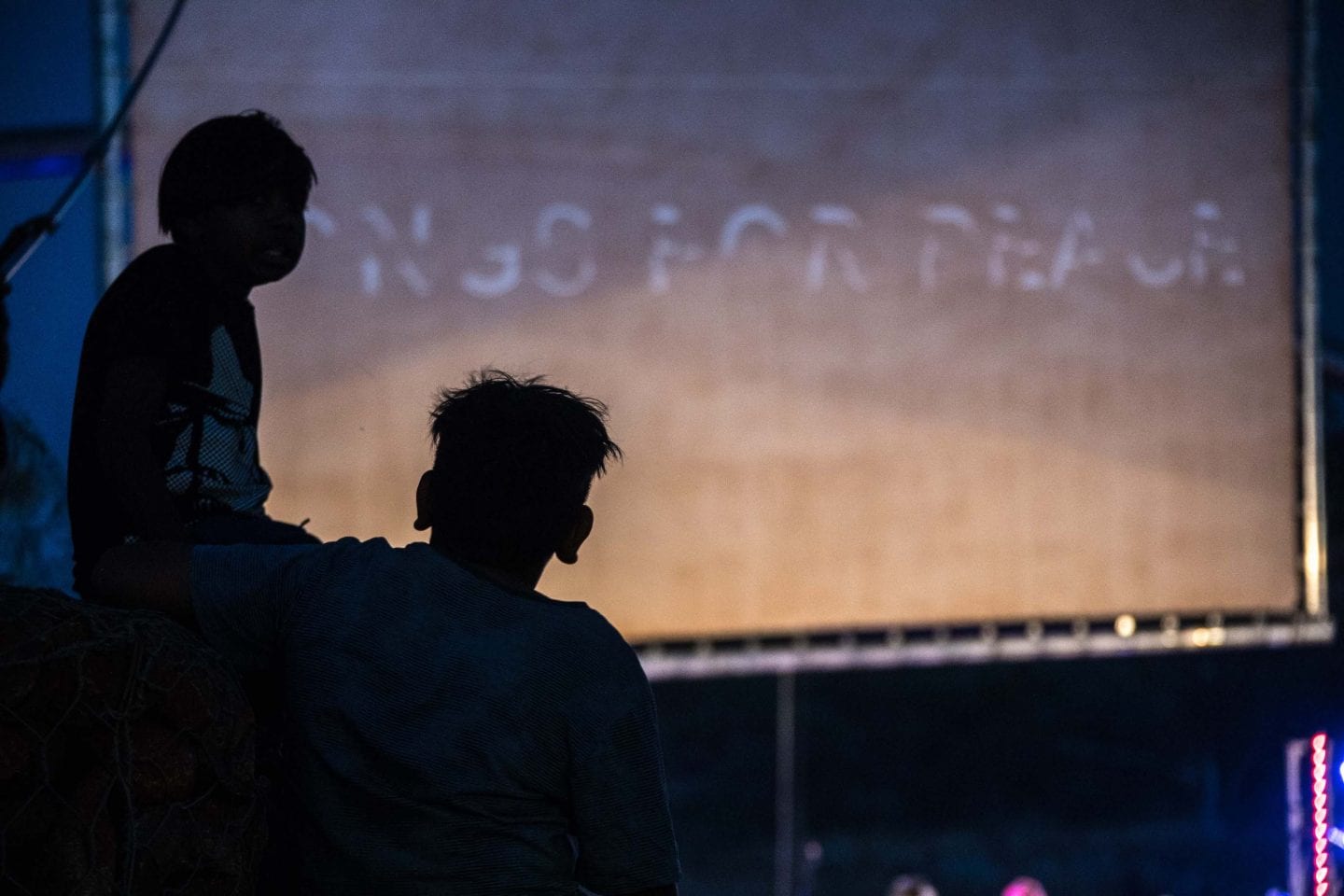 Speaking from Broome with her little girl close by Naomi Pigram says “It was about the strength of women, singing for the women. By God the women were strong. It’s one of those experiences that is now weaved into my being, because they’re now part of me.  I’m so grateful to be part of it, I would do it a thousand times.”

Songs for Peace will return to Yirramagadu (Roebourne) on 19th September 2020. To find out more about Big hART’s work in Roebourne, visit the website HERE