Introducing Amy Morcom, Producer of SKATE. Coming from a diverse theatre-making background including Sydney Festival, Les Enfants Terribles, and STOMP in the West End, Amy is bringing her theatrical expertise and knack for organisational detail to the Cutaway. Amy lets us in on a day-in-the-life of a Producer; her hopes for SKATE; and her favourite fail-proof snack.

“There’s literally nothing else that does the same thing. It hooks all your senses.” An interview with SKATE Producer Amy Morcom, on what a producer actually does, and why she thinks skateboarding and percussion make such a powerful combination.

How did you become involved with SKATE Project?

I moved back from the UK in 2016 and there was an opportunity to work on Project O in Wynyard. I remember seeing a brochure for a couple of project ideas, and there was something about SKATE, with a little tag line: “STOMP on wheels”. That was interesting because I’d been working on STOMP in London for a few months, then the opportunity came up to work on the Melbourne development of SKATE.

What is the role of a Producer?

The producer is the linchpin in pulling together the ideas from the creatives and making them happen. It’s about building a team and providing the organisational structure so that everyone can do their own part in the process. Connecting people, communicating, organising schedules, trying to keep your head in detail, as well as the bigger picture. 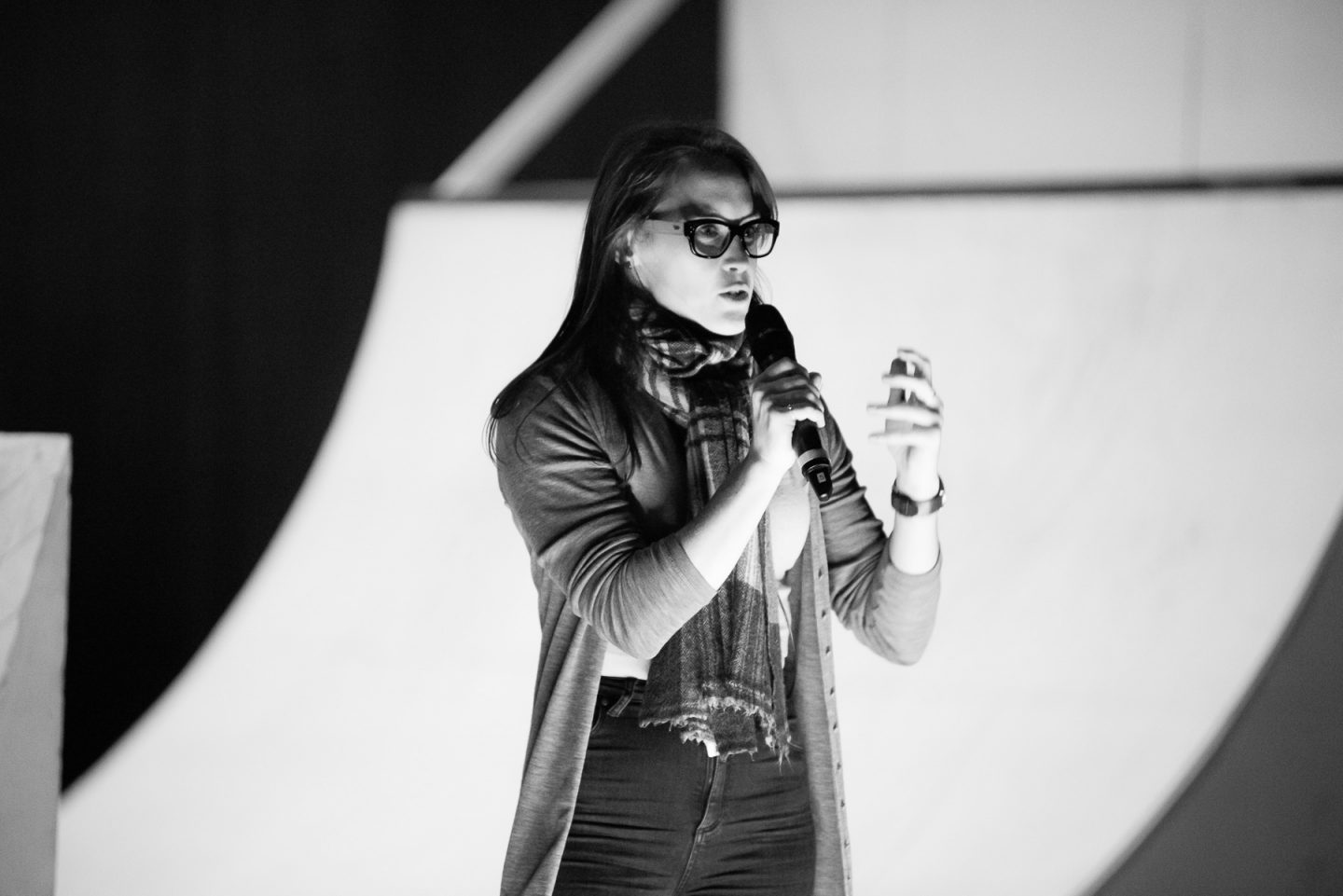 Amy Morcom speaking to audience at a SKATE Transitions showing in May at the Cutaway. Image by David Stefanoff.

How is a Creative Producer different to a Director?

Particularly in theatre, the director has the creative vision for the project, and the producer is the one that goes: “Alright, how do we do that; let’s hire this person; how about this person; where are we going to do it.” The budget is a big one – to be able to get the things you need, to be able to make the director’s vision a reality.

You have a diverse producing and theatre-making background, including work on STOMP World Tour. What do you think has made STOMP so successful as a touring theatre production and what can SKATE learn from this model?

STOMP is a rhythm and percussion show – nonverbal and non-narrative. It opens the show up to connect with literally anybody – every age, every kind of culture.

It’s a really interesting model that STOMP has used. Each production in each region has a core company, cast and crew. Then there’s also a big pool of cast around the world known as ‘Stompers’, that are drawn upon in particular regions. The awesome thing about that, is that it really is a big family, and I think that reads in performance. It’s great for the show to be adaptable like that, and I think that this would work really well with SKATE as well. If we get the chance to go to certain regions, there’s always local stars, particularly within the skate community. If we could work on having opportunities for locals in whatever region the show might end up touring to, then we could connect authentically with the skateboarding community wherever we are. 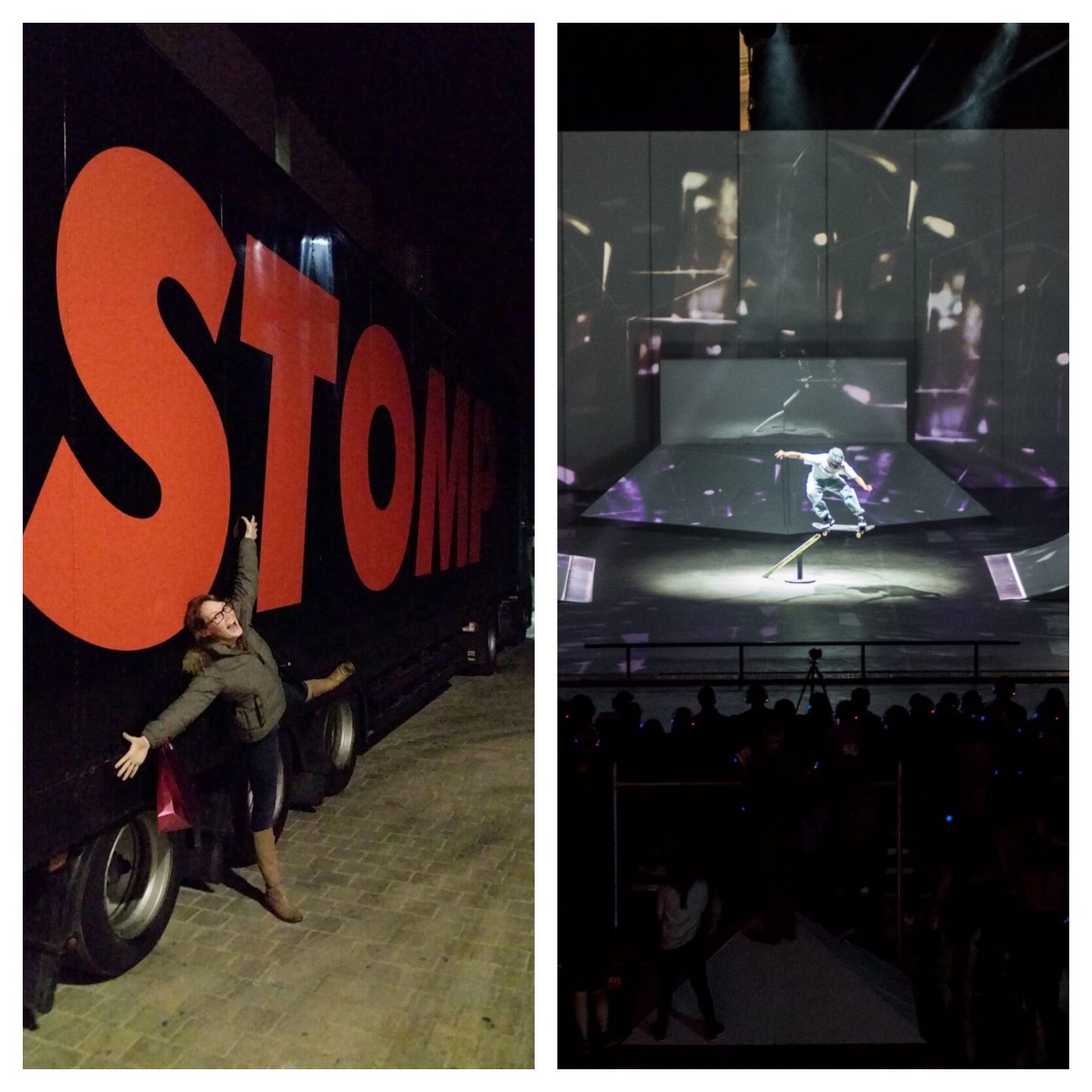 Did you have experience or knowledge of the skate scene before commencing this project, and how did you prepare yourself for this role?

Not at all, I come from more of a theatre production background. For me, it’s always about approaching the needs of a project, and not imposing expectations for no reason. It’s also been listening to other Big hART staff members from their experience with this particular skateboarding community. Then, trusting and respecting that, and accepting that things are going to have to be a bit different because of the nature of skateboarding and that particular community. In particular, I’ve been learning from Mark Leahy (Music Director), who has worked super closely with the skaters for quite a few years – even before the Melbourne creative development. And also with Lincoln (Community Producer), as well as Scott (Director) and his wealth of experience from working with young people and communities around the country.

What makes SKATE unique to other theatre that you have worked on?

There’s literally nothing else that does the same thing. It’s particularly about celebrating the art form of skateboarding, really committing to making great percussion, plus the added visual element of projection. It hooks all your senses. 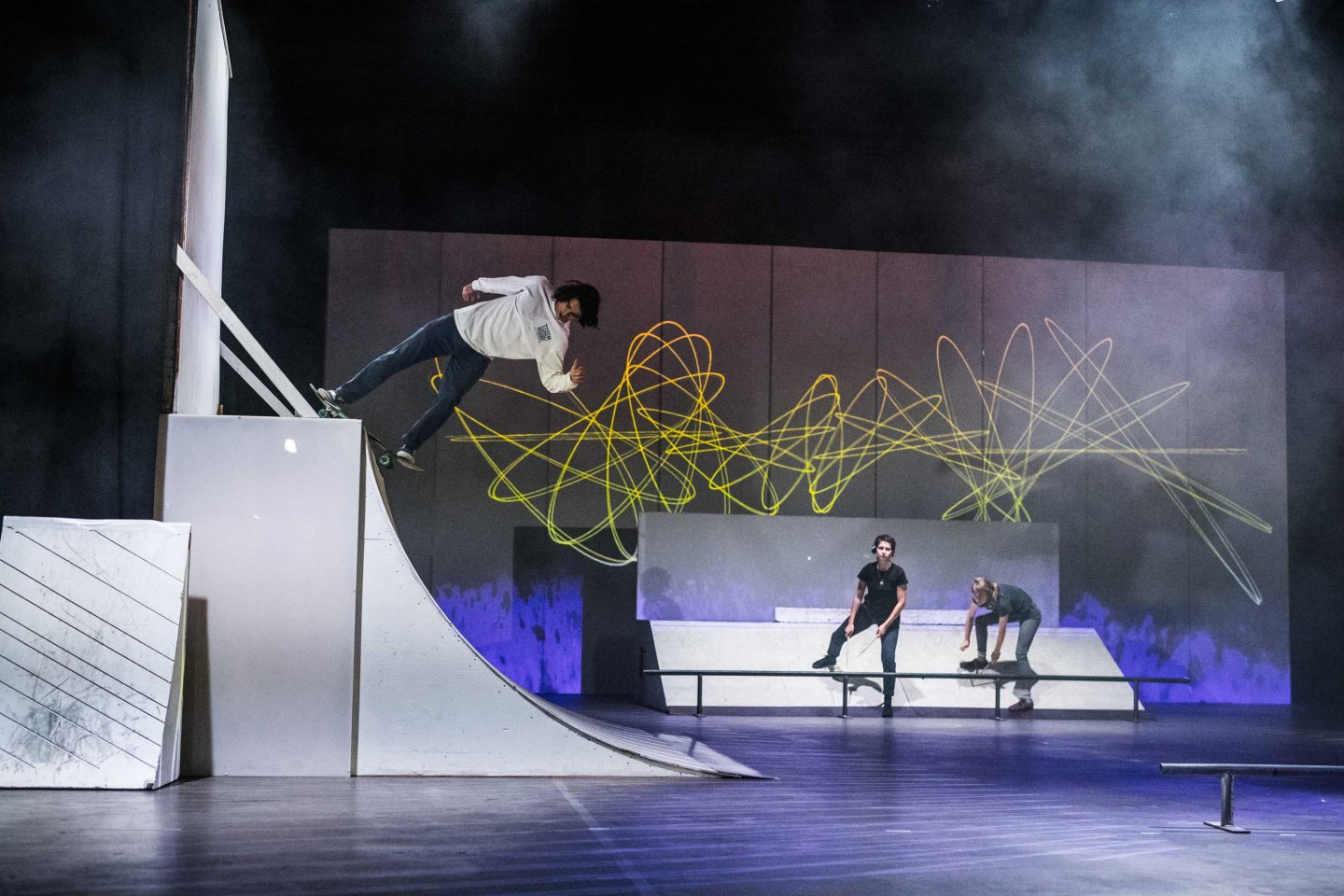 What does a typical day look like for you?

It really depends, a lot of my tasks are office-based, but a lot of my work is talking to people and connecting with the work. I might rock up and try and do some emails in the office; then get asked some questions and go and have some conversations; watch a bit of rehearsals; go and have a meeting; and then do it again. Mondays lately for me are not a rehearsal day, so that’s my admin catch-up day. Some days it’s being very physically present – if there’s an event, I will be making sure that everything is going to run smoothly – that can be hands on work on the floor, setting up tables and chairs, and checking in with staff, talking to the audience, to hosting the event.

Probably coffee. And I love a pastry. I’ve been smashing the cronuts at the little café down the road. 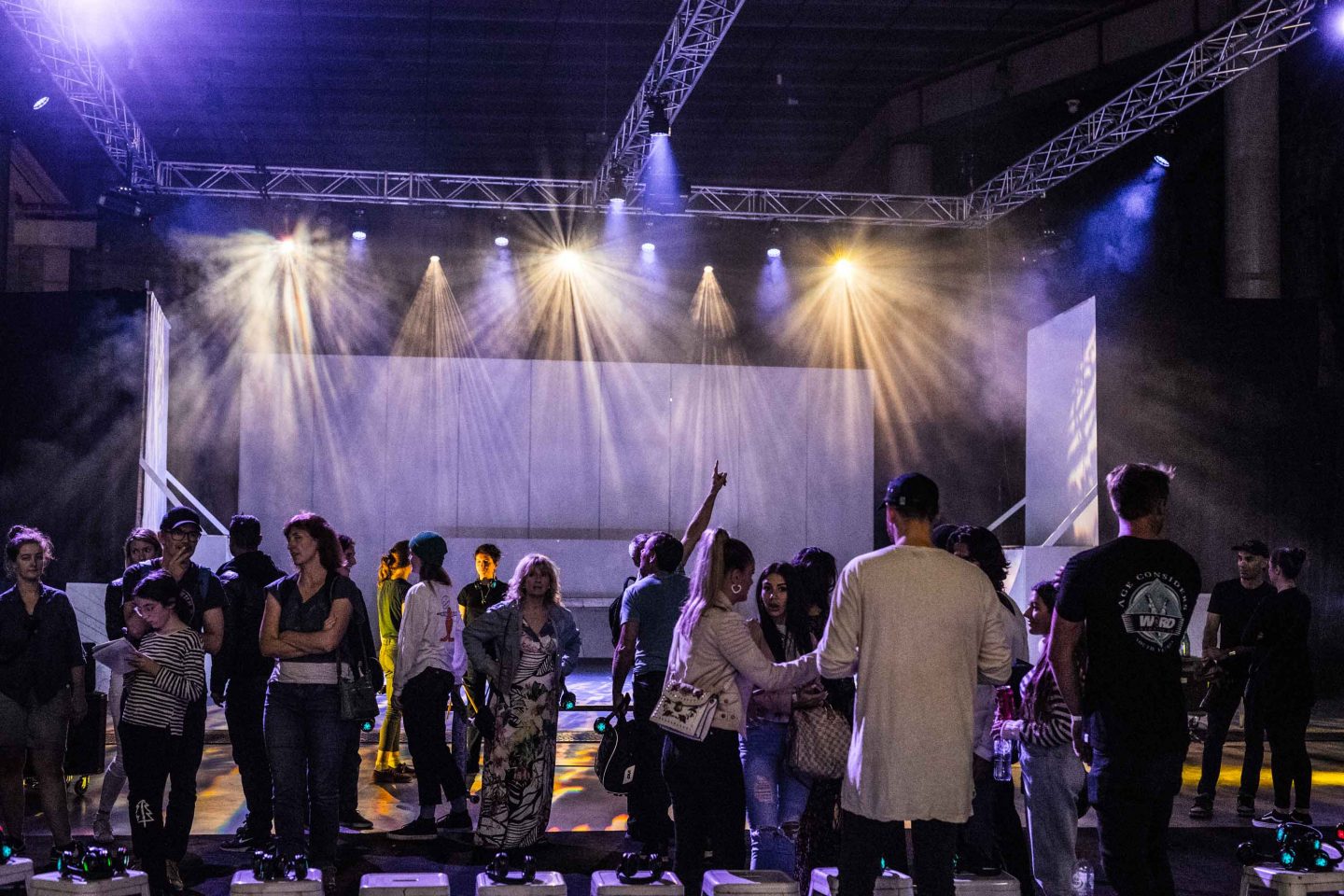 Audience at Transitions in April 2019. Image by Cameron Markin.

What’s next for SKATE?

Next is to set up a premiere of the show. At the moment we’re in development and doing public showings. The next step is to take it to a polished level in a theatre, with all the technology, people buying tickets, and then getting that on the road. We’re hoping that will be internationally, and then we’ll return to Australia for an Australian tour. 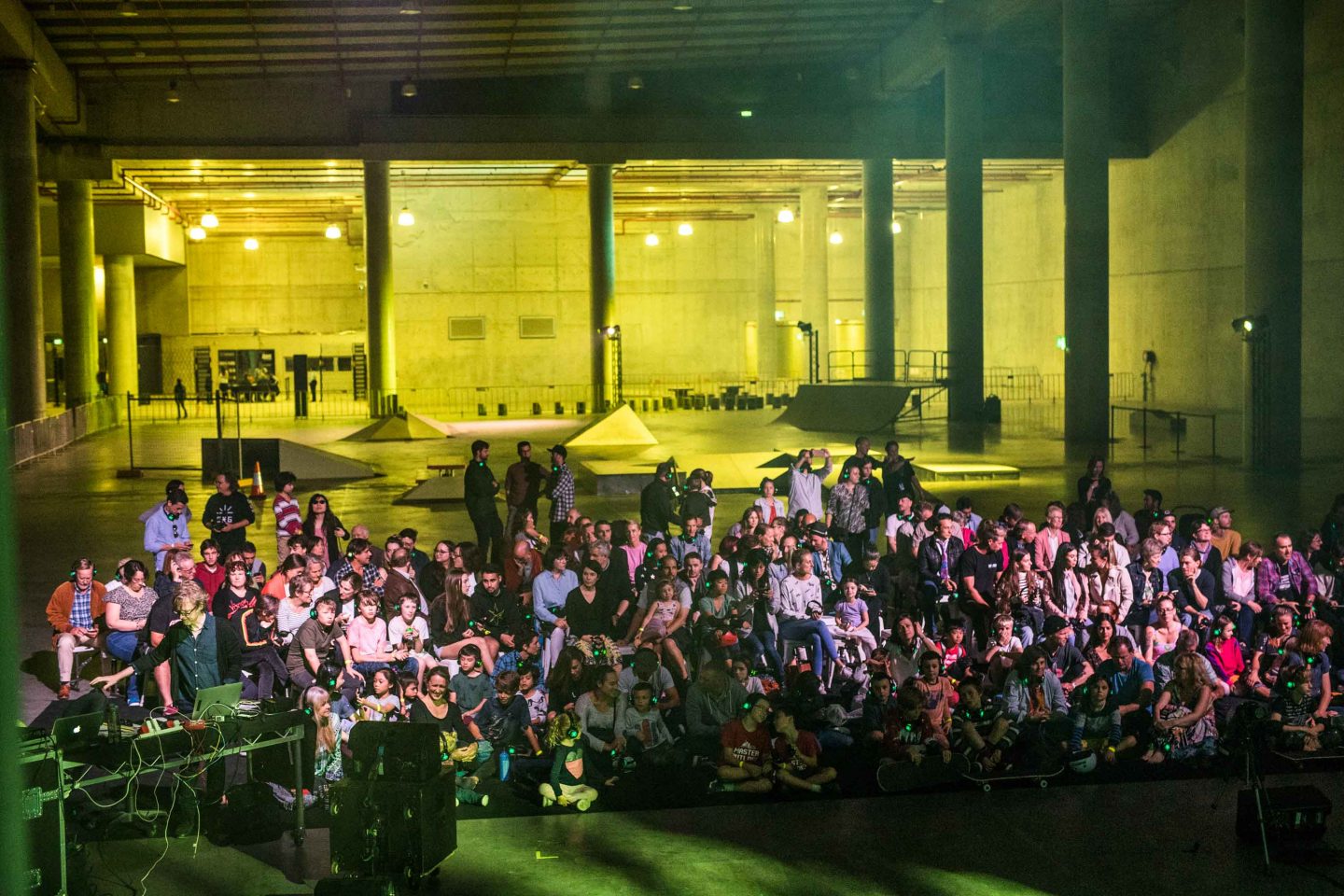 Audience with headphones, in the Cutaway space. Image by Cameron Markin.

Interview with Amy Morcom, written up by Ella Freestone.