Introducing Genevieve Dugard, Set Designer for SKATE and Associate Creative Director of Big hART. A WAAPA graduate who’s worked with the likes of Opera Australia, Sydney Theatre Company and Bangarra Dance Theatre, Genevieve first began working with Big hART in a community project in Kalgoorlie almost 20 years ago, and has been designing theatre shows for Big hART ever since.

An interview with SKATE Set Designer Genevieve Dugard, on designing a set for skateboarders, balancing theatre and sport, and her creative vision for the future of SKATE. “I’m inverting what you would normally think about skateboarding and skateboarders, and then I work that into pieces that I think will create dynamic movement in the room.”

When I design a set, I begin with a look and feel for the show. In this instance, I am highlighting the art of skateboarding, and therefore moving away from preconceived ideas of what skateboarding represents visually. There’s no real “skate park” aesthetic in my design. We’re moving towards something a bit more fresh and contemporary, and that’s what we are trialling at the Cutaway at the moment on a prototype set. The idea is to set it in a marble room when the show actually does go on tour, that’s what we’ll be aiming for aesthetically. 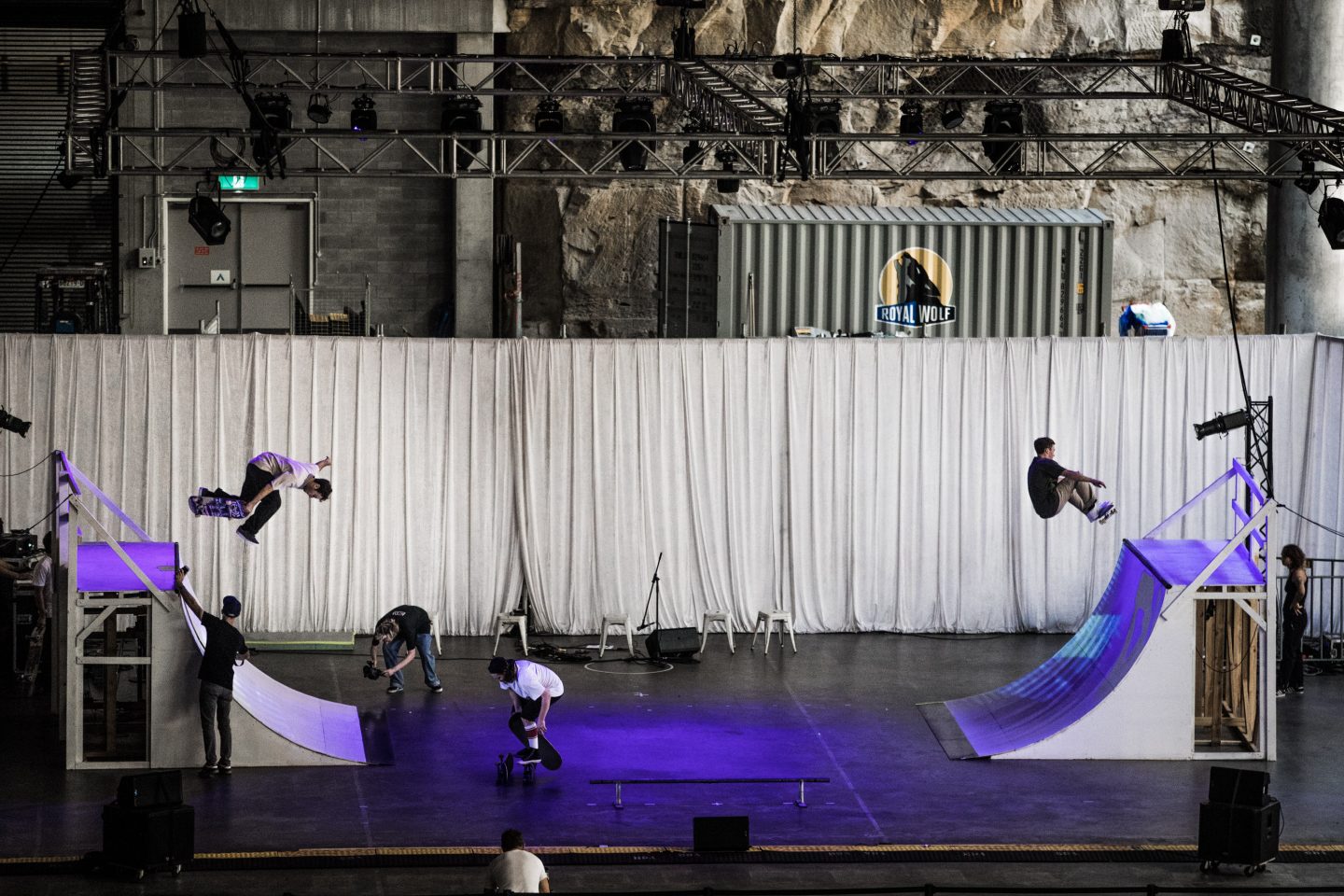 I’m inverting what you would normally think about skateboarding and skateboarders, and then I work that into pieces that I think will create dynamic movement in the room. For example, six-foot ramps, some other small pieces that the skaters can move around, navigate, and change up to do different things.

I work closely with Scott Rankin (Director), Mike Finch (Rehearsal Associate Director), and Mark Leahy (Musical Director), as well as with Steve Hawker (Lighting Designer), so that we can integrate lighting and set electrics into the pieces that we design. I also spend a lot of time chatting with the skaters about potential set pieces, and sometimes set ideas have to be switched for pieces that are more skateable or more dynamic in the room.

Designing the set for SKATE has felt familiar, in that Big hART shows often involve some form of kinetic consideration. Previous shows have involved movement artists and choreography, and in turn that has dictated the way that the set will be designed. SKATE is different in the sense that skateboarders need particular surfaces and angles in order to be able to skate really well. Those factors have to be taken into consideration, and in some ways it’s almost designing for sport rather than performance – or at least trying to get a balance between the two. 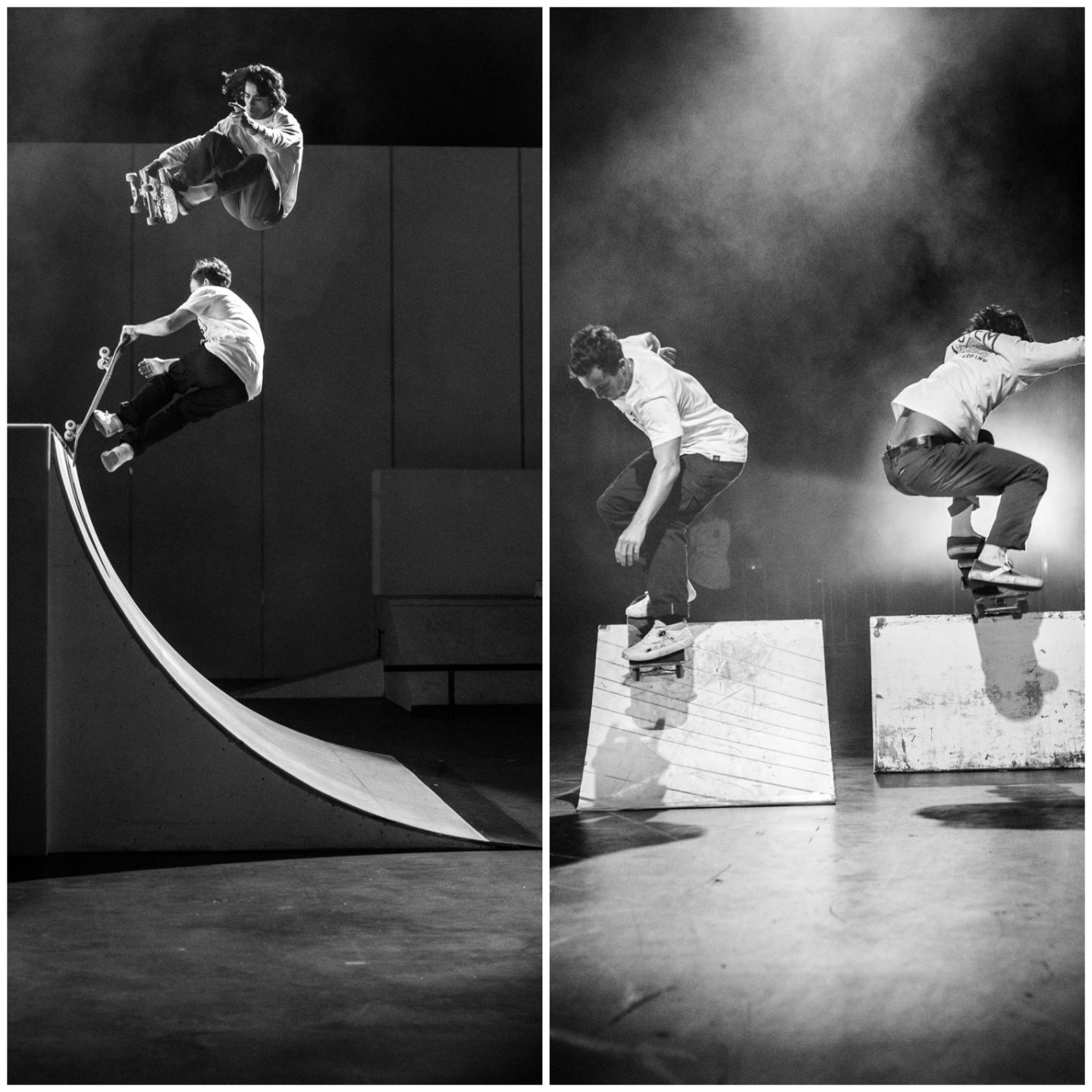 We’ve looked at different types of surfaces that apply themselves well to skateboarding in terms of traction and flow, and also surfaces that sound great when the wheels go over them. We’ve played with surfaces that allow us to explore different sounds and acoustic, such as plywood, perspex, pool mosaic tiles, timber slats, steel coping, and skateboarding pipe rails.

I’ve worked with the skaters to come up with a few different set pieces, and a main factor has been determining the structural heights. For example, the cast wanted to try a six-foot ramp, and so that is the main feature of what they’re skating at the moment.

Aesthetically, there’s a need to create a blank canvas for the projection work that Sam, Jordan and Ben are creating. For this reason, I’ve kept the textural applications and the scenic applications quite pared back and plain, so that the language of the AV speaks loudly. It’s a mix of giving the skaters interesting things to play with – such as different angles and shapes in the room – but then also keeping it simple so that the other visual language in the show such as lighting and AV have a really strong presence as well. 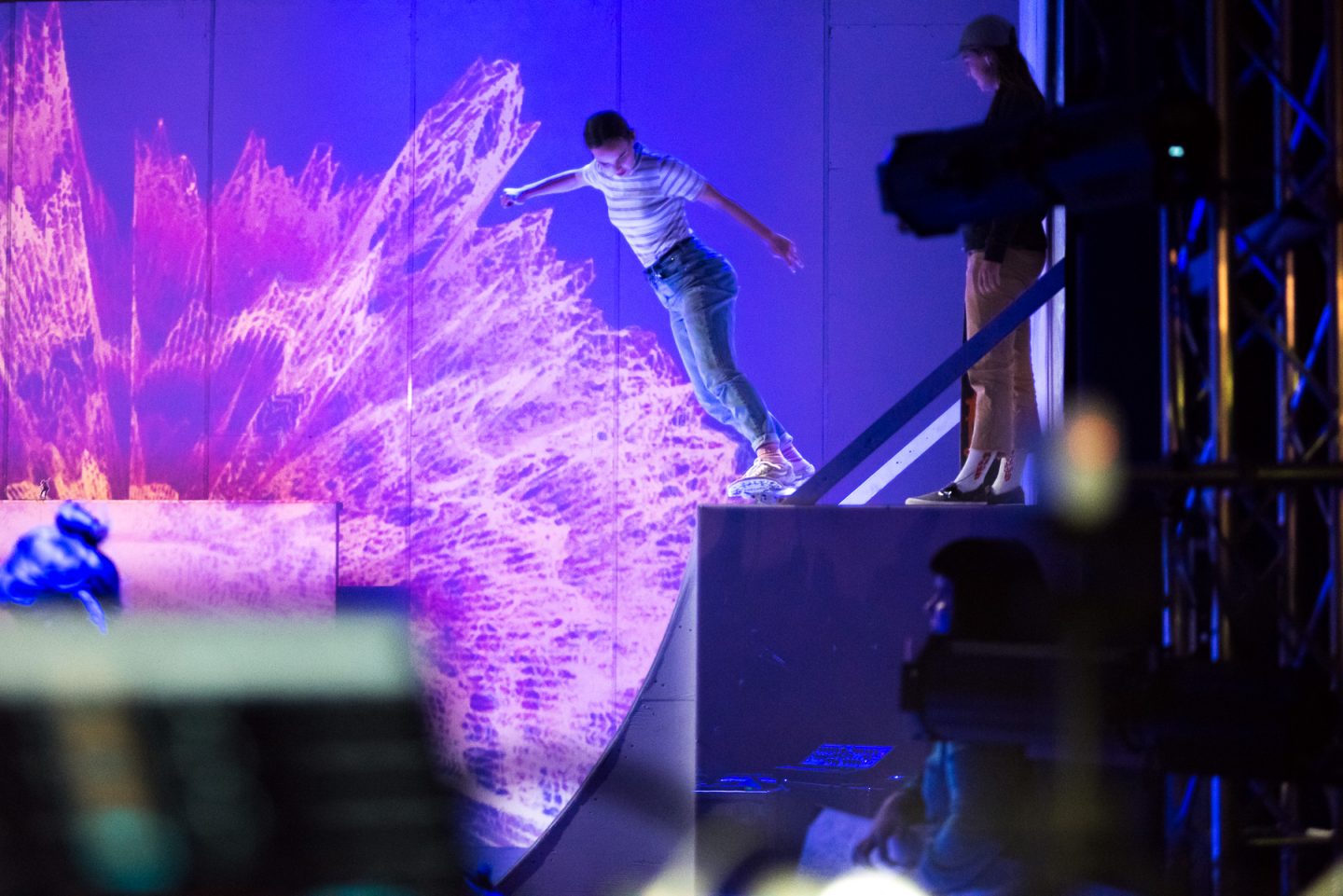 Cast member Sari Simpson at a Transitions showing at the Cutaway. Image by David Stefanoff.

The Cutaway is an enormous, cavernous and beautiful space – and I was worried that anything smaller scale in the space would seem inconsequential. In fact, every piece that goes in builds a strong look and feel in the space. We decided that instead of trying to fill the space up with the set for SKATE, we would actually divide up the space up into different areas. So, we have the Open Skate area; the audience viewing area; the performance set; an experimentation lab for sound; and a backstage area where we store and assemble the set as it goes along. 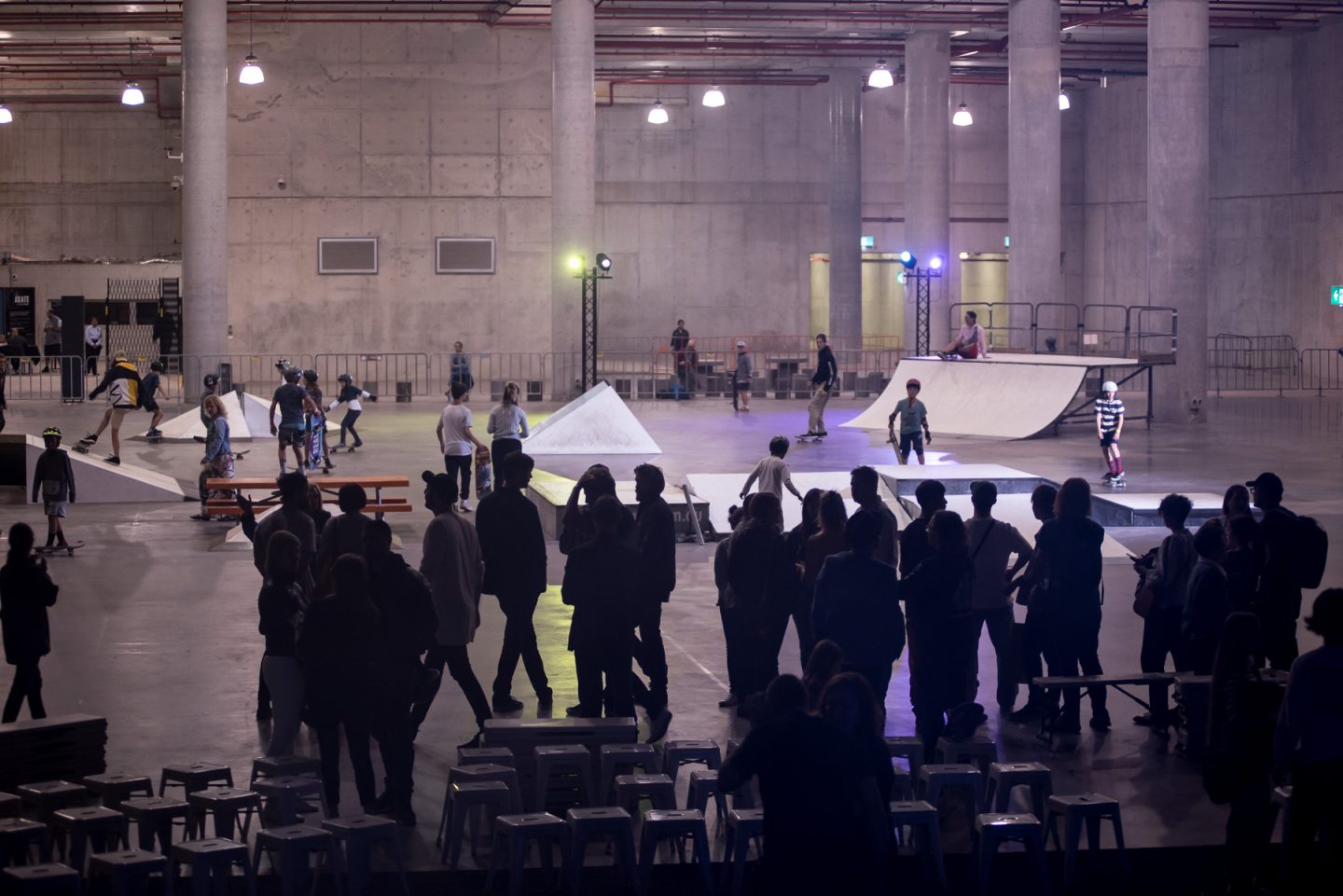 Open Skate set up and audience viewing area at the Cutaway. Image by David Stefanoff.

When we first started in the Cutaway we designed a piece called ‘The Pyramid’, which broke up into 16 different skateable shapes. For the first activation of Open Skate, the skaters skated The Pyramid all assembled together. Now, we have broken that up and played around in different parts of the room both in the set and in the Open Skate as well. I’ve tried to keep the aesthetic of Open Skate similar to the set, in that everything is white, pared back and simple, so that it creates really interesting sculptural shapes on the concrete grey of the Cutaway floor. It also lets Steve and the audio visual team have a play with lights and AV. 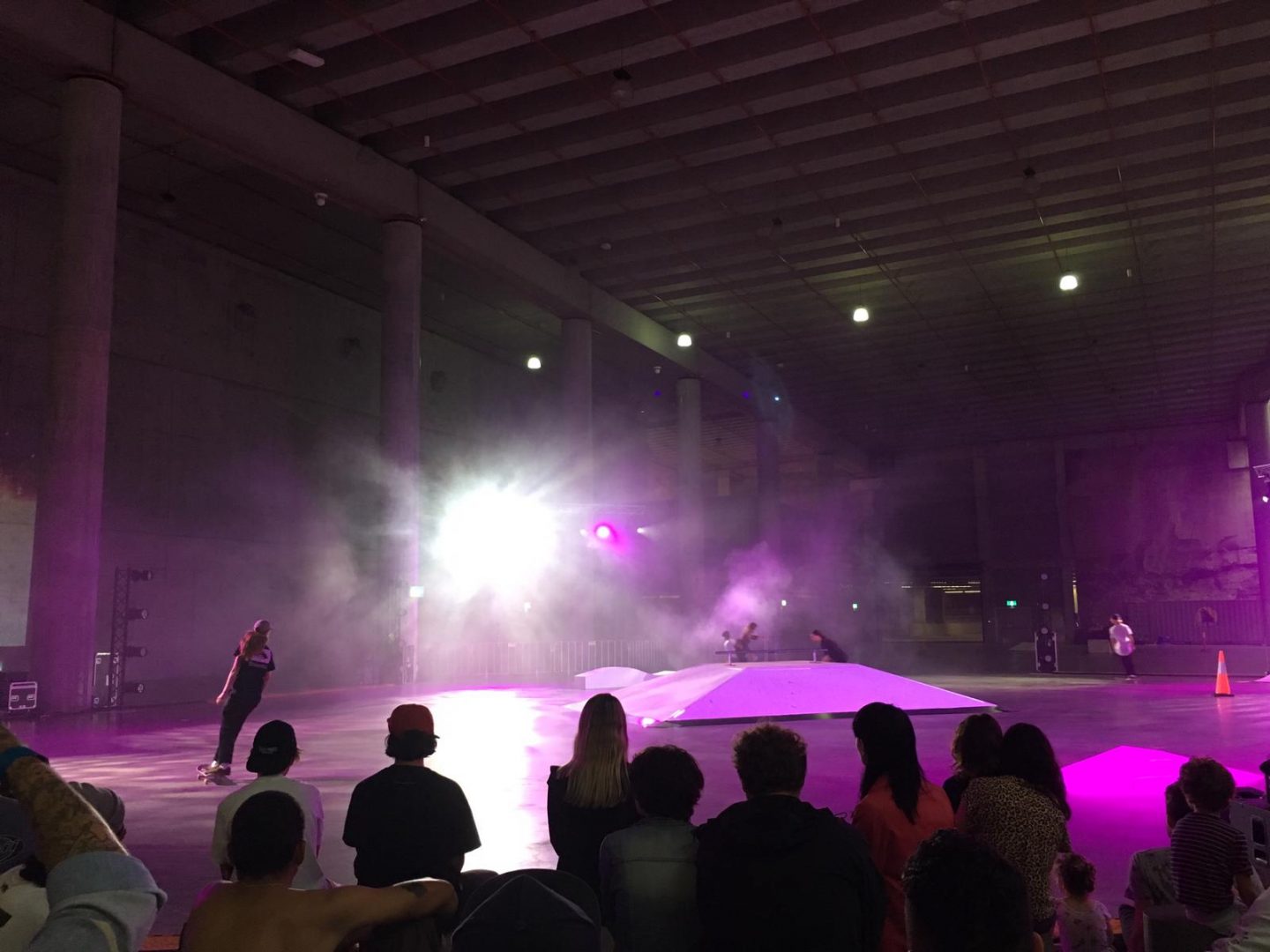 THE CREATIVE VISION FOR THE FUTURE OF SKATE

I’m imagining that the skaters come into an art gallery-like space, where the walls are made of a beautiful material like marble with brass accents, which can be used for both aesthetics and also for their sound properties. The idea is that the set continually shifts to create new dynamic shapes and spaces for the skaters to skate. Then there’s also an upper catwalk that goes around the sides and the back of the set which creates a dynamic look between the high and low areas of the space. And then different smaller, modular objects come on and off the stage, and are moved around and skated in different ways, and then disappear and come back later in different configurations.

As a touring production, the set needs to fit in a transportable vessel like a container or truck. First of all, we will look at simple, tried and tested theatrical tricks involving casters, tracks and fly bars. Then, we’ll look into more complex solutions like hydraulics and other tracking systems.

The build time will depend on the size of the theatre that we are building for and the scale of the set, but set builds ideally allow 2-3 months of a solid build time. 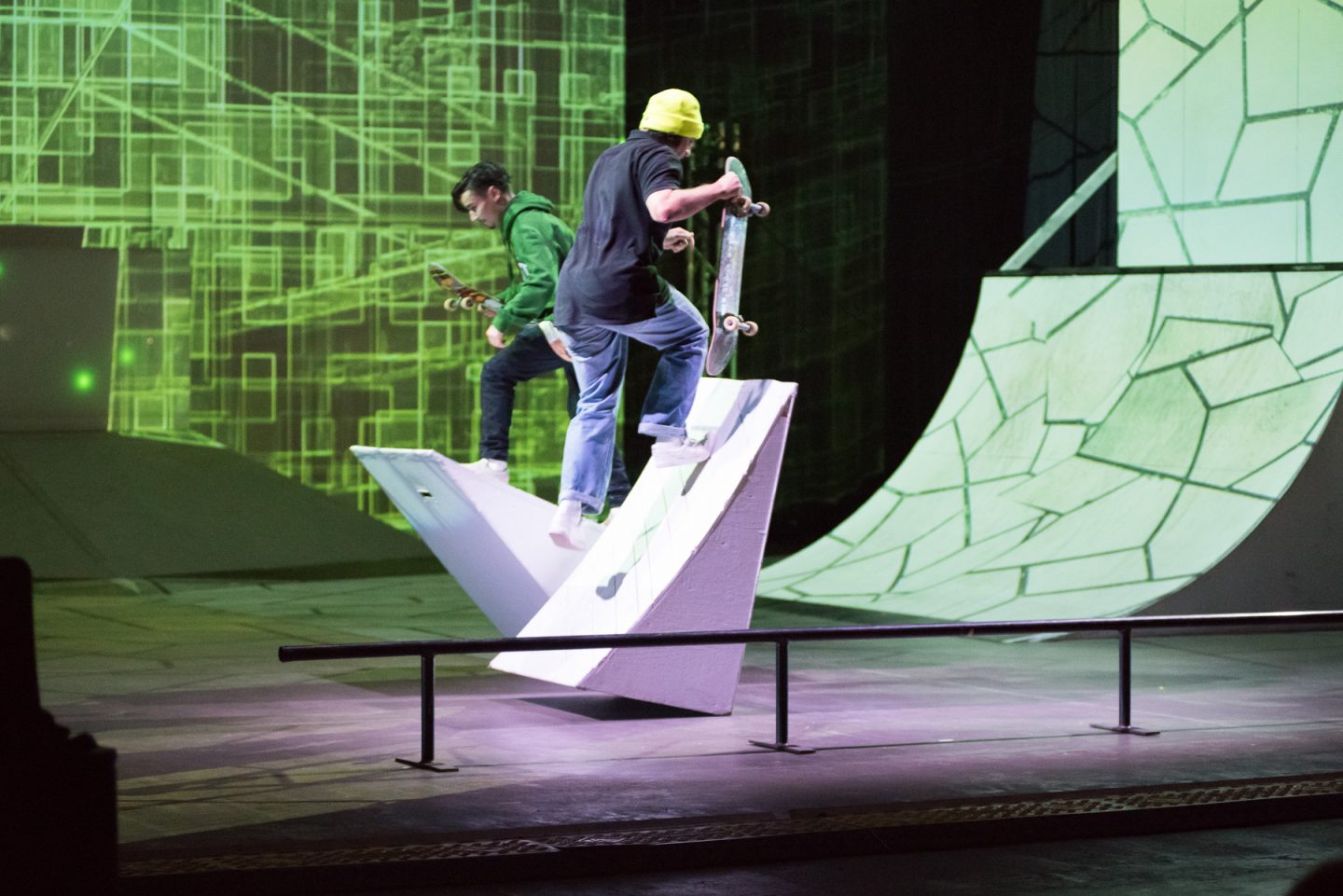 I have a really good memory of it. It was a play called Summerfolk, and I collaborated with an amazing director at WAAPA called Nick Enright. He has since passed away, but he was a real powerhouse of Australian theatre. We had no money. The set budget was something like $100, and I had to costume 16 people, and create a set that changed to reflect the different locations in each scene and each act. What we did was basically create a massive piece of crumpled paper as the backdrop. We had a bunch of old butcher’s paper that had been donated as well as old donated wallpaper glue, and we created this beautiful paper backdrop that could be lit from behind or in front. Depending on how it was lit it would evoke different locations or emotions. It turned out to be beautiful. We got a whole bunch of skirts and costumes from the costume store that were plain in colour. We stripped back all the usual constructions – so just a beautiful skirt; a mens business shirt; a plain corset over the top. We pared back the entire silhouette and found that that spoke volumes to the times, but also kept the concept behind the design flexible, so that you could transport yourself into contemporary issues if you wanted to. That was maybe 19 years ago now. 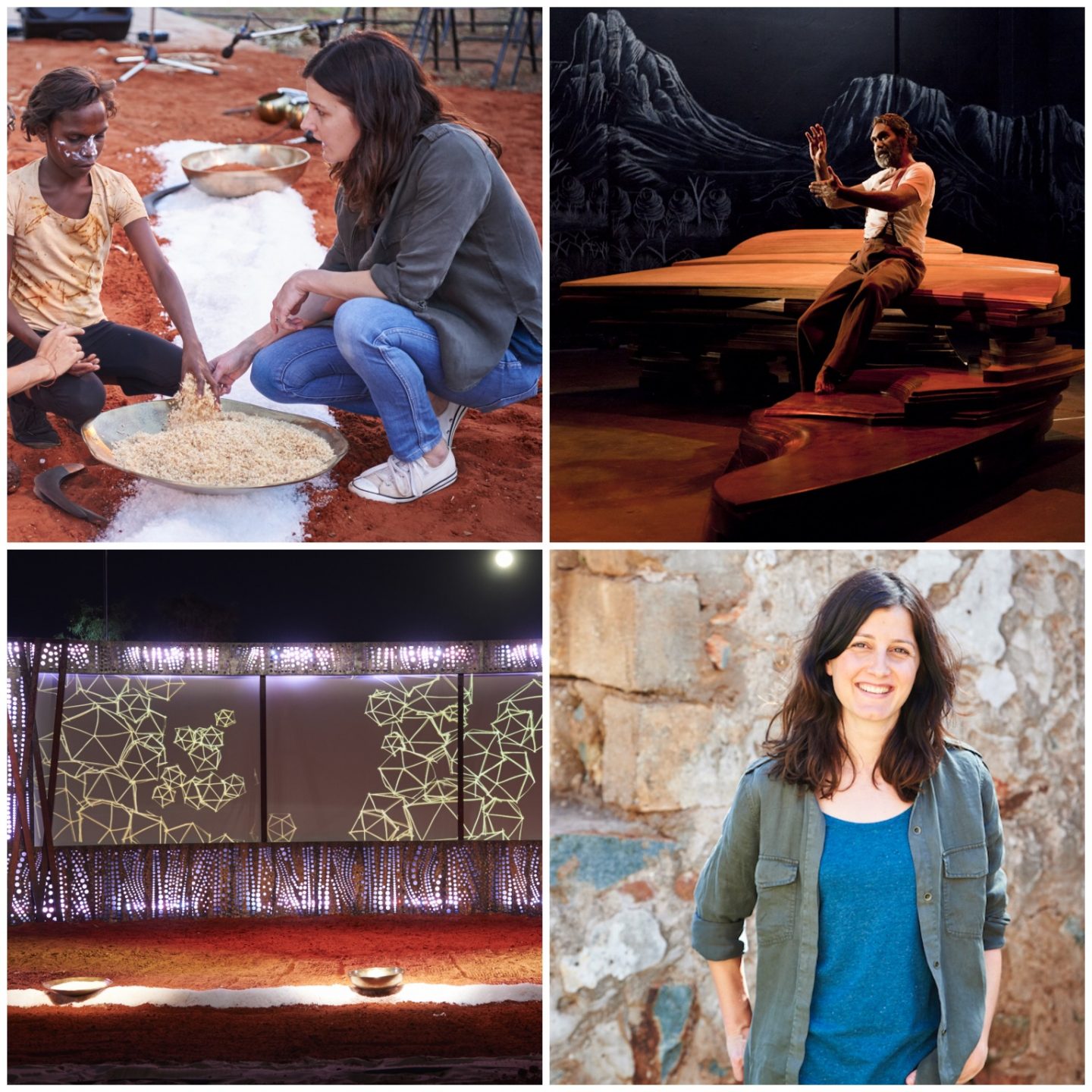 Interview with Genevieve Dugard, written up by Ella Freestone.