Painting With Light – The tech wow factor of SKATE

Cutting edge technology designed on the ground by tech artists at the Cutaway is allowing skateboarders to paint the stage with light and sound – creating a responsive stage where the narrative of SKATE is told by the movements of skateboarders.

“What we’ve been trying to do is create interactivity between the skaters and the lighting systems, so that the skaters are actually painting with light.” We talk with tech artists Jordan East, Stephen Hawker and Steph O’Hara, on how innovation and collaboration within the creative team has helped realise the SKATE vision.

For AV Systems + Content Designer Jordan East, SKATE combines four of his passions – light, music, sound, and skateboarding. Jordan graduated from UNSW in 2017 with a double degree in Computer Science and Media Arts, which was the genesis in pursuing a career in system design and art. He has worked with electric engineers to program Vivid LED screens, spent many years as a video editor and motion graphics editor, and more recently has been working in the music industry in video production and projection for live shows – however, this is his first theatre show.

“I guess I’m still pretty young. This is a pretty big opportunity for me in terms of getting into theatre work.” 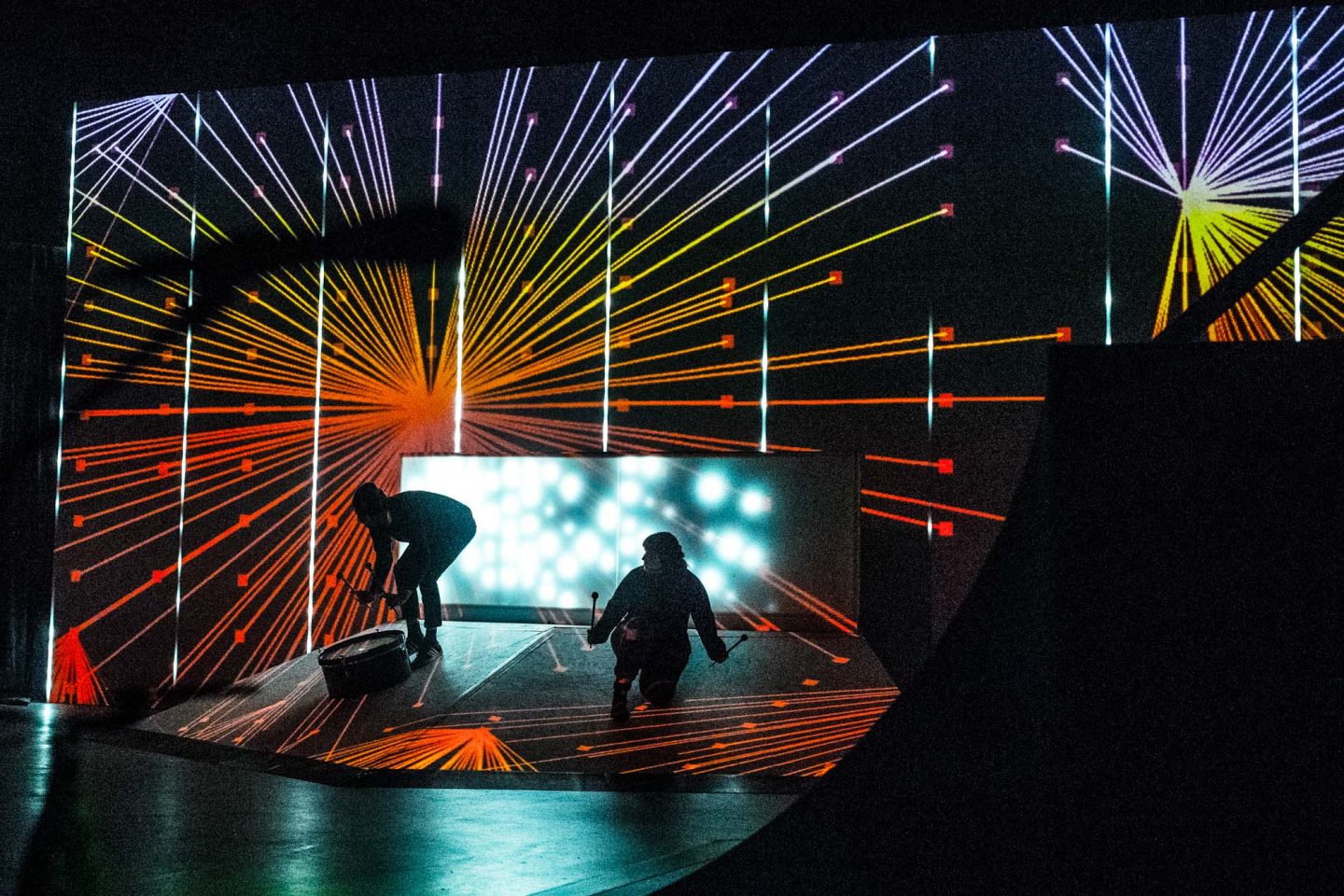 Projection design at the Cutaway. Image by Cameron Markin.

Jordan’s projection designs are inspired by the dynamic movements of skateboarders, as well as the particle system software he is using – allowing him to create interactive and beautiful systems that are visually exquisite.

“In a live show I can control the dynamics of each scene, the number of particles, and the velocity of the particles. But the skaters will actually control where the particles are being drawn to, and where they’re spawning. The interactivity is automated by the skaters, and then I control the dynamics of the projection. We are also using motion tracking in a way that hasn’t been done before. The technology has been around for a while but not for something as fast paced as SKATE.”

Jordan places a camera in the room that filters out projection and stage lighting and just leaves him with an infrared spectrum. Flood lights then flood the stage with infrared light, and software can then be used to track motion in real-time.

“When you have the whole show centred around the skaters and their fast moving skills, the interactive technology really brings out their performance.” 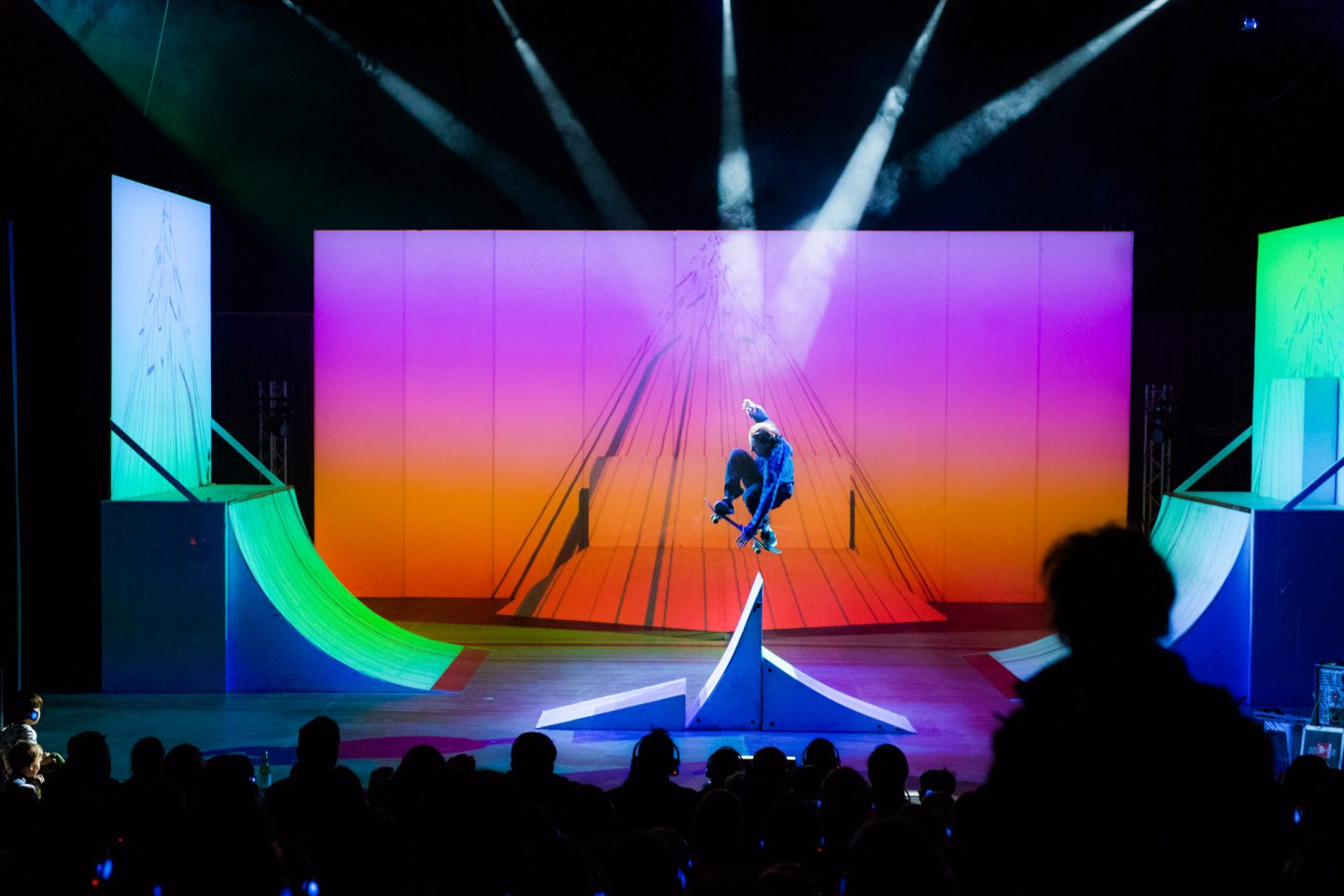 Lighting Designer Stephen Hawker has been involved with SKATE since White Night in Melbourne in 2016, and has previously worked with the likes of the Australian Chamber Orchestra, Belvoir, and Sydney Theatre Company.

“Usually what you get is the sound, video, and lighting departments doing their own thing. For this show, these lines are blurred. We’re all getting images and sources from each other. Sound is triggering a lot of the LED, as well as a lot of the lighting and AV. They’re interplaying with each other to actually generate the imagery that is produced on stage. That is something that doesn’t happen very often.”

What makes SKATE stand out from other shows that Stephen has worked on? From a lighting design perspective, it’s the wireless tracking technology that allows skaters themselves to activate the light. 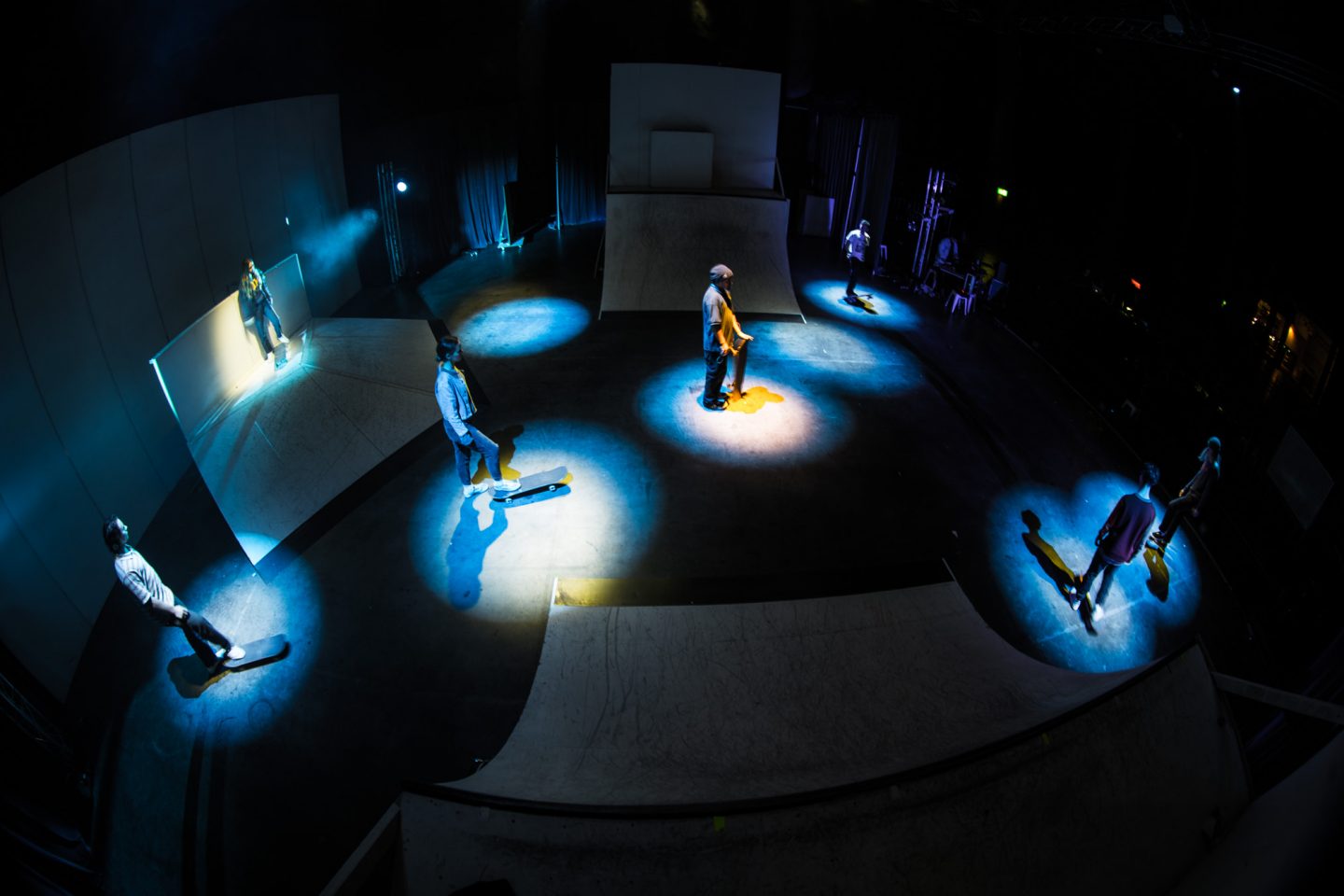 Skaters in the spotlight at tech rehearsal. Image by Cameron Markin.

Stephen has been working closely with Genevieve Dugard [Set Designer] on creating set electrics for the show, so that the set can be transformed into its own lighting object. His main focus is highlighting and providing contrast to the AV design so that that the AV can cut through, allowing the movements of the skaters to “pop”.

“There’s one particular scene where the skaters are sliding across two rails, and the light follows them across the actual rail itself. The skaters activate this light via Jordan’s tracking system. A large part of achieving that interactivity, is setting up the systems so those rails are completely mobile. Then wherever we put them on the stage, they can be activated by the skaters themselves.”

As SKATE is non-narrative, Stephen’s lighting decisions are a free-flowing response to what is happening in the room.  Rather than creating a mood or a feeling, most of Stephen’s work has been focused on adding to the “wow” factor.

“It’s a lot like a rock show. I’m responding to the beats that are happening, and to the dynamics on stage. It’s a musical response more than anything else.” 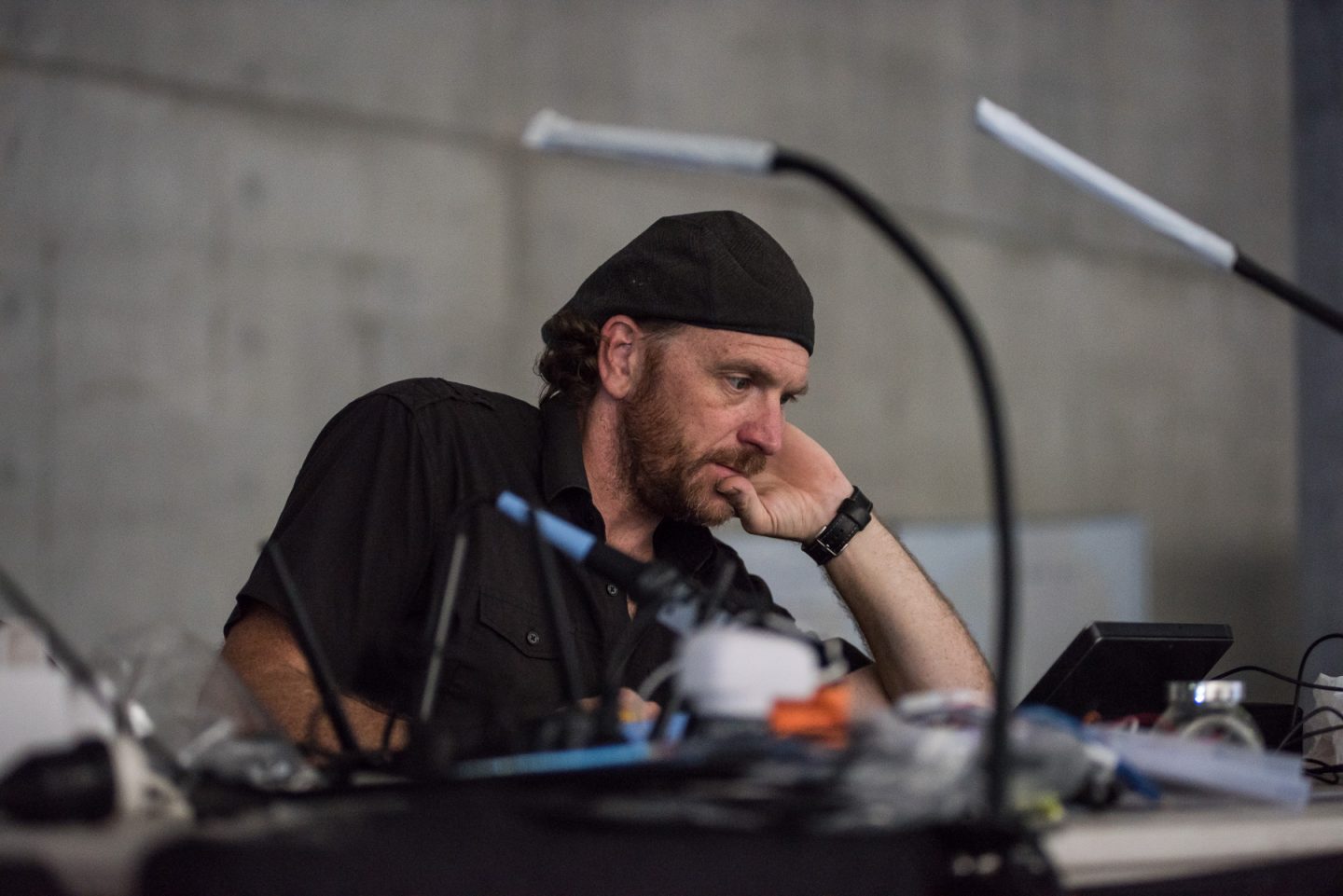 Stephen Hawker behind the lighting desk at the Cutaway. Image by David Stefanoff.

As the show has developed, Stephen notes that subtle emotional elements have naturally developed. For example, cast member Callum Donohue plays the clown of the show.

“Every time he comes on stage I give him a particular warm colour. We highlight what he’s doing so that the audience can have an emotional response with him. Then for some of the bigger tricks, we help the audience to connect to the skater by having a warm light cut through a cold blue light. It’s the idea of having that warming and homely kind of feel, to egg them on. Even though there is no narrative, there is still a narrative or storyline that happens with the light.”

What excites Stephen most about SKATE is creating brand new technology. He has been working with Electrician and Programmer Sophie Parker, who came on board as the tech expert. Sophie has helped create roving pixel set pieces and portable moving light objects, as well as a control device that allows Stephen to wirelessly control the LED.

“What we’re dealing with is LED tape that you can make into a video screen – and then creating the technology to actually control it. This doesn’t really exist in the outside world. It’s been really lovely to find someone smarter than myself, who can actually come up with these solutions.” 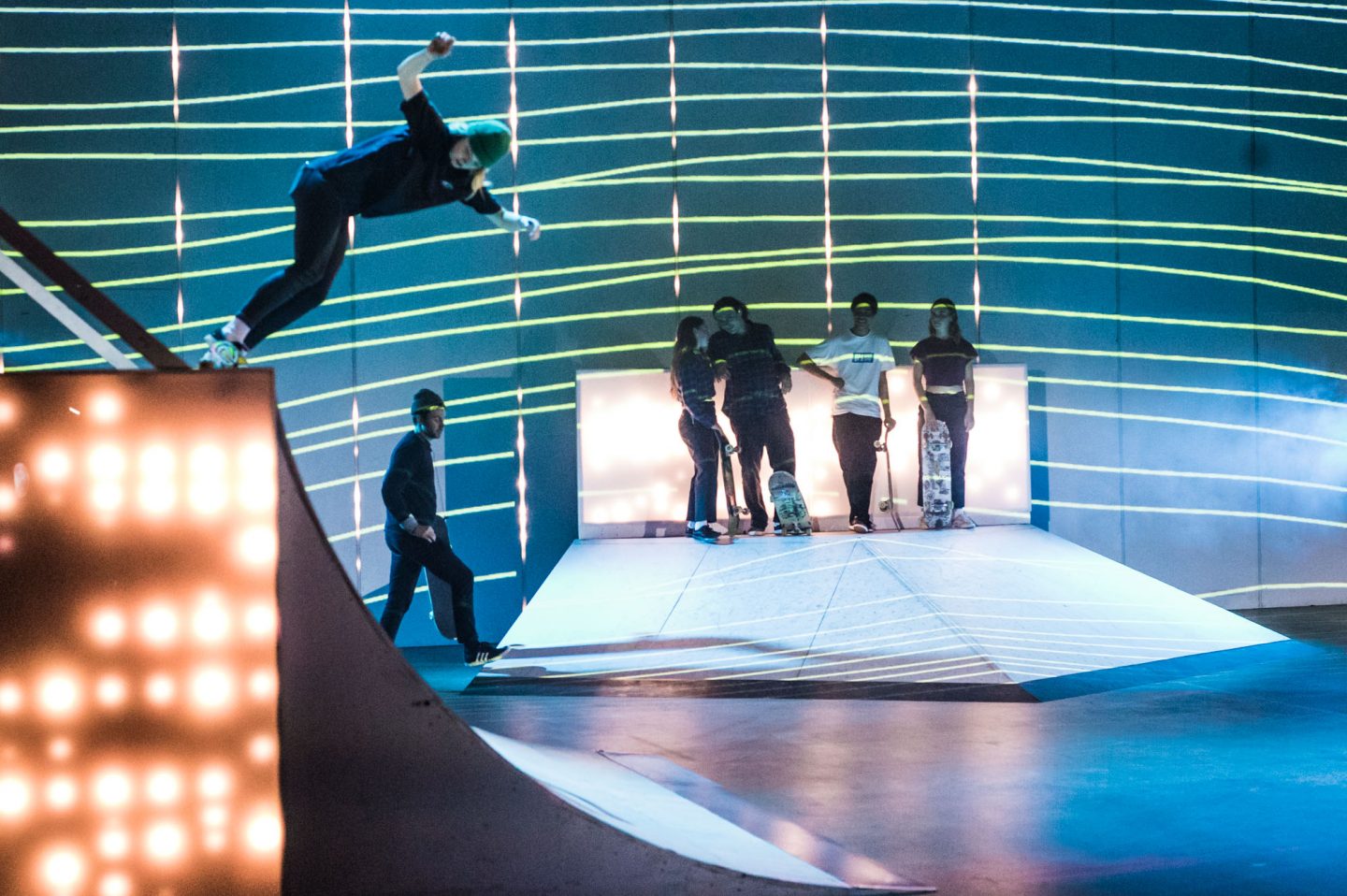 SKATE’s focus on new technology was a main attraction for Lead Sound Designer Steph O’Hara, who came on board with the project a few years ago during the Melbourne development phase. Steph has been in the sound design industry since the early 90s – studying sound at La Trobe University and working as a sound engineer and sound designer ever since.

“I guess my official name now is ‘Sound Artist’. I do a lot of interactive installation art, and I’m often using machines to help find a sonic world.”

“What excited me about SKATE, was when Scott talked about making all the sound come from stage. He didn’t want playback, or outside sources of sound like sound effects or music. Everything had to come from stage. We talked about treating the stage like a musical instrument – almost like a sound installation in itself.” 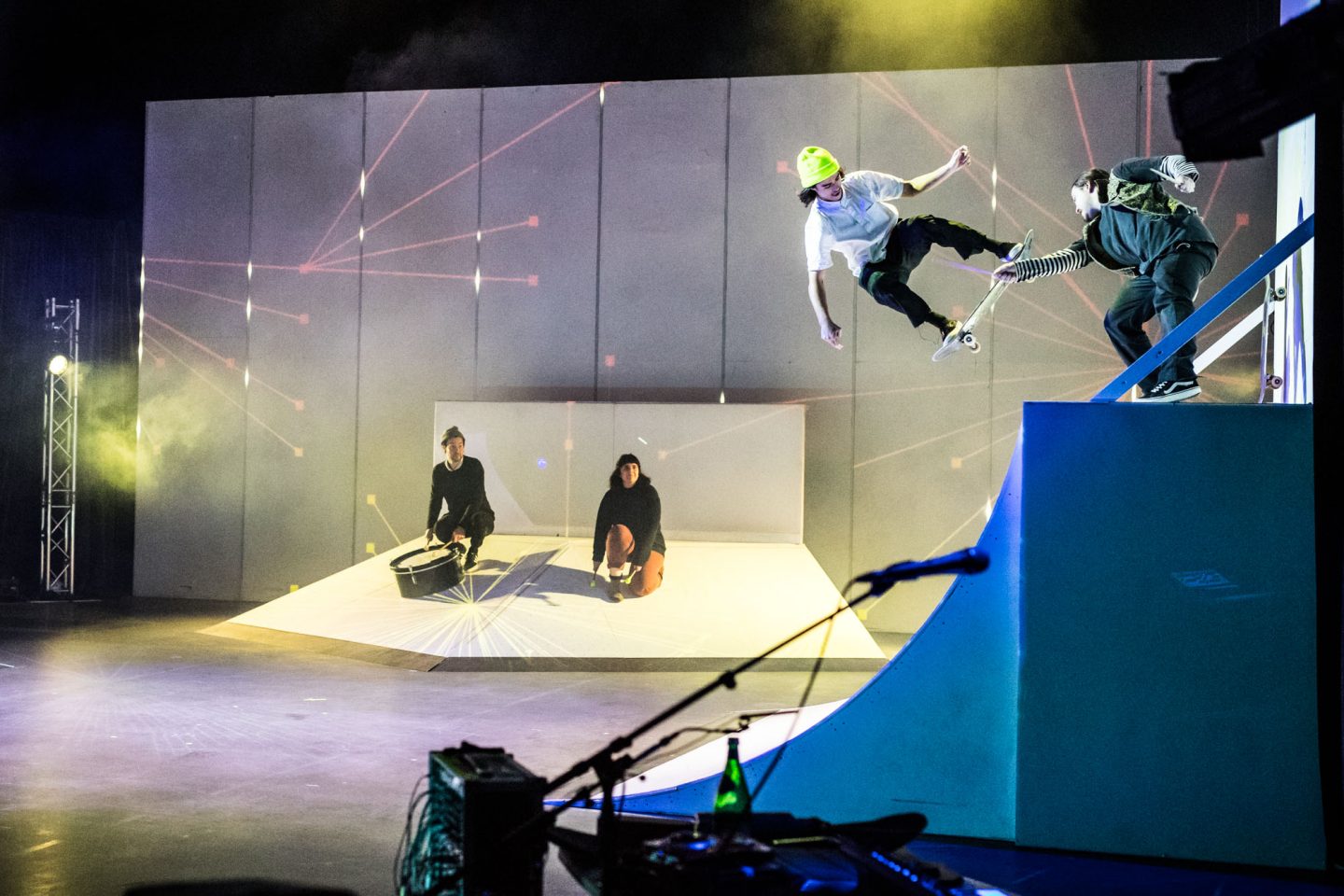 To create this interactivity, the skaters are wearing microphones on their shoes, and microphones have been placed inside the skate ramp. Then, a triggering system is used to take signals from the microphones, before processing them to produce different sounds.

“The show has quite a metallic sound, because of the sounds that skateboards make. And then every time a sound is heard it is very different, because it depends on exactly how the skateboards hit a particular surface. It feels organic, but it is also manipulated.”

One of the sound design challenges has been the 10 second reverb that bounces off the cement in the massive Cutaway space. Providing the audience with headphones has been an experiment in dealing with it.

“It’s a very challenging space that we are in– it’s almost impossible. Using the headphones has been fantastic in trying to remove the sound of the room, and in helping the audience to hear things from a different perspective. It becomes a very insular and personal experience.” 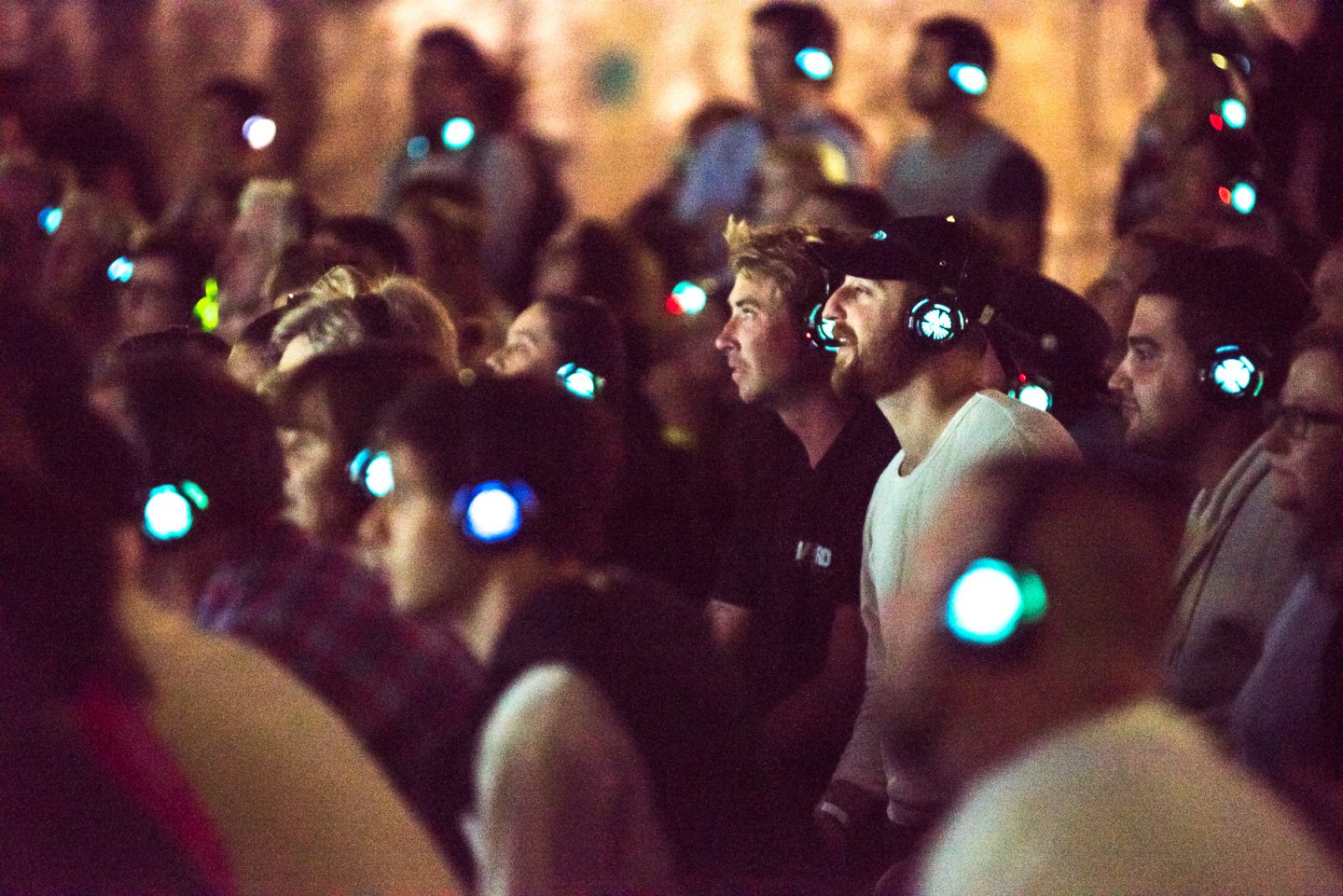 Experimenting with headphones at the Cutaway. Image by David Stefanoff.

Steph has worked with Associate Sound Designer Caitlin Porter to create a complex sound network that can interact with the AV and lighting systems.

“The sound is on a network and that network can be sent over to the AV and lighting team. These machines are hooked up talking to each other and giving each other information about what’s happening on stage. It becomes this dynamic stage, which then drives the show.”

Does anything ever go wrong in a live show? All the time, apparently.

“Before one show, the entire computer audio system shut down and had to be rebooted. Caitlin has been fantastic, she really knows the system. If something does go wrong, it’s just a matter of taking a breath and going through a bunch of steps in order to remedy it. It is a bit stressful, but on the whole it has been pretty stable.”

In the end, mishaps are a part of the beauty of SKATE’s experimentation.

“The lovely thing about developing this show is that we can try it again and again. We can try it with something new, something different, and then slowly discover the show and what works.” 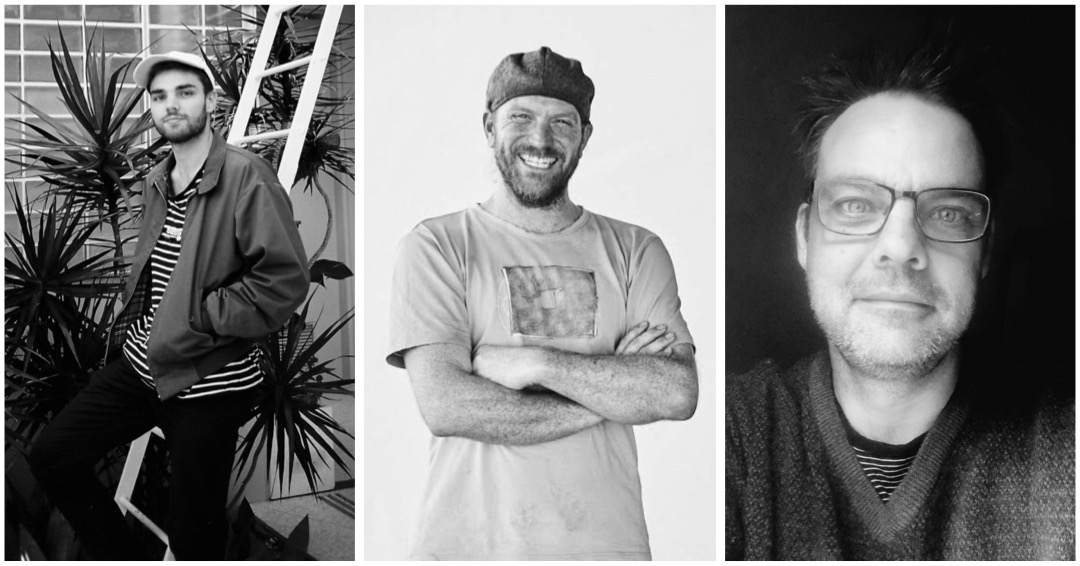